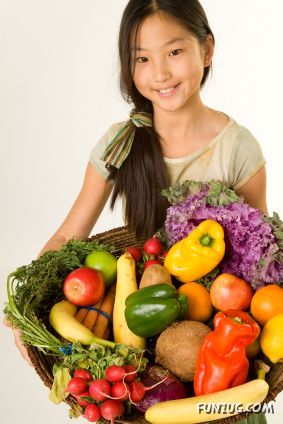 Vegetarian food is easy to digest

Consider making this healthy choice as one of your new year’s resolutions. ..
Stacks of studies confirm that a diet full of fresh fruits and vegetables and grains is your best bet for living a longer, healthier and more enjoyable life. There are literally hundreds of great reasons to switch to a plant-based diet; here are 22 of the best:

1 You’ll live a lot longer.
Vegetarians live about seven years longer, and vegans (who eat no animal products) about 15 years longer than meat eaters, according to a study from Loma Linda University. These findings are backed up by the China Health Project (the largest population study on diet and health to date), which found that Chinese people who eat the least amount of fat and animal products have the lowest risks of cancer, heart attack and other chronic degenerative diseases.

2 You’ll save your heart. Cardiovascular disease is still the
number one killer in the United States, and the standard American diet (SAD) that’s laden with saturated fat and cholesterol from meat and dairy is largely to blame. Plus, produce contains no saturated fat or cholesterol. Incidentally, cholesterol levels for vegetarians are 14 percent lower than meat eaters.

3 You can put more money in your mutual fund.
Replacing meat, chicken and fish with vegetables and fruits is estimated to cut food bills.

4 You’ll reduce your risk of cancer.
Studies done at the German Cancer Research Center in Heidelberg suggest that this is because vegetarians’ immune systems are more effective in killing off tumour cells than meat eaters’. Studies have also found a plantbased diet helps protect against prostate, colon and skin cancers.

5 You’ll add color to your plate.
Meat, chicken and fish tend to come in boring shades of brown and beige, but fruits and vegetables come in all colours of the rainbow. Diseasefighting phytochemicals are responsible for giving produce their rich, varied hues. So cooking by colour is a good way to ensure you re eating a variety of naturally occurring substances that boost immunity and prevent a range of illnesses.

6 You’ll fit into your old jeans.
On average, vegetarians are slimmer than meat eaters, and when we diet, we keep the weight off up to seven years longer. That’s because diets that are higher in vegetable proteins are much lower in fat and calories than the SAD. Vegetarians are also less likely to fall victim to weight-related disorders like heart disease, stroke and diabetes.

7 You’ll give your body a spring cleaning.
Giving up meat helps purge the body of toxins (pesticides, environmental pollutants, preservatives) that overload our systems and cause illness. When people begin formal detoxification programs, their first step is to replace meats and dairy products with fruits and vegetables and juices.

8 You’ll make a strong political statement.
It’s a wonderful thing to be able to finish a delicious meal, knowing that no beings have suffered to make it..

9 Your meals will taste delicious.
Vegetables are endlessly interesting to cook and a joy to eat. It’s an ever-changing parade of flavours and colors and textures and tastes.

10 You’ll help reduce waste and air pollution.
Livestock farms creates phenomenal amounts of waste. The tons of manure, a substance that’s rated by the Environmental Protection Agency (EPA) as a top pollutants. And that’s not even counting the methane gas released by goats, pigs and poultry (which contributes to the greenhouse effect); the ammonia gases from urine; poison gases that emanate from manure lagoons; toxic chemicals from pesticides; and exhaust from farm equipment used to raise feed for animals.

11 Your bones will last longer.
The average bone loss for a vegetarian woman at age 65 is 18 percent; for non-vegetarian women, it’s double that. Researchers attribute this to the consumption of excess protein. Excess protein interferes with the absorption and retention of calcium and actually prompts the body to excrete calcium, laying the ground for the brittle bone disease osteoporosis. Animal proteins, including milk, make the blood acidic, and to balance that condition, the body pulls calcium from bones. So rather than rely on milk for calcium, vegetarians turn to dark green leafy vegetables, such as broccoli and legumes, which, calorie for calorie, are superior sources.

12 You’ll help reduce famine.
It takes 15 pounds of feed to get one pound of meat. But if the grain were given directly to people, there’d be enough food to feed the entire planet. In addition, using land for animal agriculture is inefficient in terms of maximizing food production. According to the journal Soil and Water, one acre of land could produce 50,000 pounds of tomatoes, 40,000 pounds of potatoes, 30,000 pounds of carrots or just 250 pounds of beef.

13 You’ll avoid toxic chemicals.
The EPA estimates that nearly 95 per cent of pesticide residue in our diet comes from meat, fish and dairy products. Fish, in particular, contain carcinogens (PCBs, DDT) and heavy metals (mercury, arsenic; lead, cadmium) that cannot be removed through cooking or freezing. Meat and dairy products are also laced with steroids and hormones.

14 You’ll protect yourself from foodborne illnesses.
According to the Center for Science in the Public Interest in the US, which has stringent food standards, 25 per cent of all chicken sold in the United States carries salmonella bacteria and, the CDC estimates, 70 percent to 90 percent of chickens contain the bacteria campy-lobacter (some strains of which are antibiotic-resistan t), approximately 5 percent of cows carry the lethal strain of E. coli O157:H7 (which causes virulent diseases and death), and 30 percent of pigs slaughtered each year for food are infected with toxoplasmosis (caused by parasites).

15 You may get rid of your back problems.
Back pain appears to begin, not in the back, but in the arteries. The degeneration of discs, for instance, which leads to nerves being pinched, starts with the arteries leading to the back. Eating a plant-based diet keeps these arteries clear of cholesterol- causing blockages to help maintain a healthy back.

16 You’ll be more ‘regular.’
Eating a lot of vegetables necessarily means consuming fiber, which pushes waste out of the body. Meat contains no fibre. Studies done at Harvard and Brigham Women’s Hospital found that people who ate a high-fiber diet had a 42 percent lower risk of diverticulitis. People who eat lower on the food chain also tend to have fewer incidences of constipation, hemorrhoids and spastic colon.

18 You’ll help to bring down the national debt.
We spend large amounts annually to treat the heart disease, cancer, obesity, and food poisoning that are byproducts of a diet heavy on animal products.

19 You’ll preserve our fish population.
Because of our voracious appetite for fish, 39 per cent of the oceans’ fish species are overharvested, and the Food & Agriculture Organization reports that 11 of 15 of the world’s major fishing grounds have become depleted.

21 You’ll provide a great role model for your kids.
If you set a good example and feed your children good food, chances are they’ll live a longer and healthier life. You’re also providing a market for vegetarian products and making it more likely that they’ll be available for the children.

22 Going vegetarian is easy!
Vegetarian cooking has never been so simple. We live in a country that has been vegetarian by default. Our traditional dishes are loaded with the goodness of vegetarian food. Switching over it very simple indeed.