Photographs that reveal an alien planet? No – the breathtaking animated simulations of the world within the HUMAN BODY

Animators have created remarkable pictures that resemble an alien landscape from the latest science fiction blockbuster, but are in fact ultra-realistic representations of the inside of a human body.

Produced by studio XVIVO in Hartford, Connecticut in the U.S., the movies magnify areas of our insides by up to 10 million times.

The 3D images were produced as part of a project aimed to help students and scientists understand the human body in new and creative ways.

XVIVO compiled the collection for institutions including Harvard, Pfizer, and the United States Department of Defence and used replications of electron micrographs, medical illustrations and photographs to recreate snapshots of parts of the body at a molecular level. 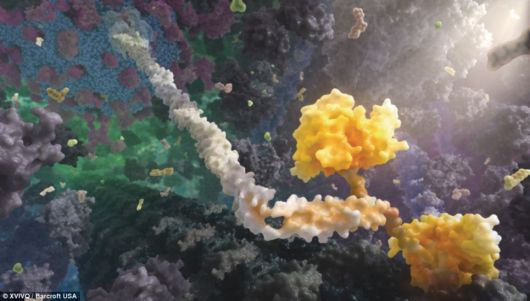 An underwater world?: This is an image of kinesin (yellow, centre), a motor protein that is capable of moving across a cell. Kinesins are able to ‘walk’ along microtubules, filament-like protein structures within cells that are involved in a variety of cellular processes, ranging from cell division to transportation of certain chemicals within cells

Animators have included motion images of the inner ear, bone marrow and the protective structure inside the gastrointestinal tract amongst other areas.

Although the project used real data, the equipment used to produce the microscopic imagery produces no colour, so illustrators added their own shades, tints and tones.

Michael Astrachan, a partner in XVIVO said: ‘Aesthetically inspirational art moves people. We can take information that is typically taught in a bland, uninspiring two dimensional textbook and bring it to life through a meaningful and inspirational journey.’ 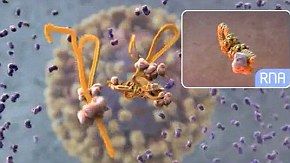 Resembling an alien biodome: A magnified image of a virus ‘blebbing’ inside human body. In cell biology, a ‘bleb’ is an irregular bulge in the plasma membrane of a cell. This often occurs when a cell dies but blebbing also has important functions in other cellular processes, including cell movement and cell division 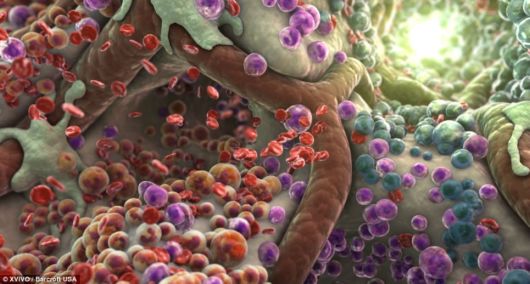 Image of a marrow cavity where Hematopoietic stem cells are found inside human body. These cells are called ‘multipotent stem cells’, and are responsible for the production of all blood cells. Through a process known as ‘hematopoiesis’ these cells mature into white blood cells (which protect us from infection), red blood cells (which carry oxygen to the cells in our bodies), and platelets (which help curb bleeding after injury) 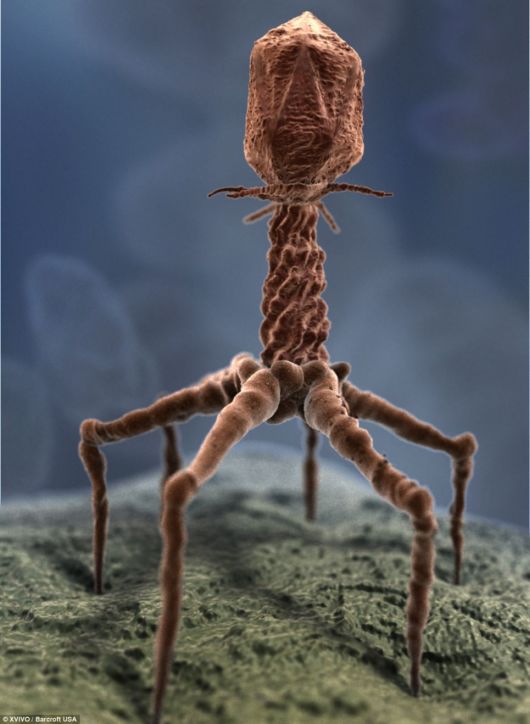 A creature from Mars?: This image is of a microscopic bateriophage, a type of virus that infects and replicates within bacteria 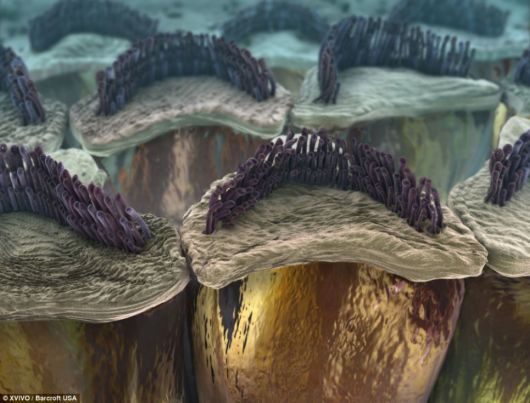 Extra-terrestrial canyons: A computer generated image of Sterocilia, the sensing organelles of hair cells found in the inner ear. They respond to motion for various functions, including hearing and balance inside human body. The hair cells turn the fluid pressure and other stimuli into electrical signals that travel to the brain where they are interpreted as sound

Image of Transforming Growth Factor Beta (TGF-beta), a polypeptide found in the human body and milk.

Golgi apparatus are minute organelles found inside most complex cells. They help package proteins inside the cell before they are sent to a part of the body to perform a whatever their job is 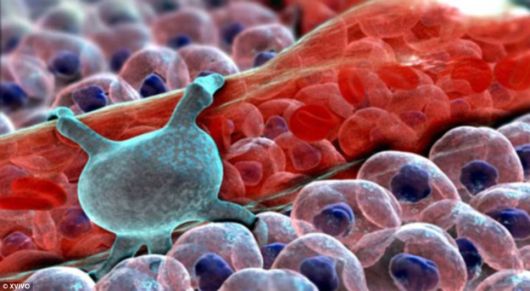 Pericytes (green) are pictured on a capillary (a small blood vessel). Pericytes regulate capillary blood flow as well as the clear vessel of cellular debris. In the brain they help sustain the blood-brain barrier