Chocolate is the favourite slightly guilt-laden indulgence for most people,
particularly around Valentine?s Day and Easter.
Add this to the already completed Xmas/New Year indulgence and you?re probably
starting to wonder why you bothered making healthy New Year?s resolutions at all.

The general thought is that the luxury of eating chocolate comes at a steep price!
It?s full of sugar caffeine and saturated fat, right?

Well, while this may be partly true, for some time scientists have been singling
chocolate out for its positive health attributes rather than its negative ones.

Cracking open those chocolate myths…
There are many misconceptions about chocolate.
Below we give you a heads-up on the healthier types of chocolate
but first let?s get a few facts straight:

Myth #1 ? Chocolate is high in caffeine

Chocolate is actually not high in caffeine, relatively speaking.
Few foods contain caffeine, and whilst chocolate is one of them it still only contains
approximately 6mg of caffeine in a chocolate bar (40g). This is compared to about 50-65mg
for a mug of tea or 65-135mg for a mug of coffee. Don?t think any of us would be considering
eating 10 chocolate bars in a go, now would we?

Chocolate contains saturated fat, most of which is stearic acid.
However, even though stearic acid is a saturated fat, studies have shown that
it has little effect on blood cholesterol levels; perhaps because when it is consumed
a relatively high proportion is converted to oleic acid (a monounsaturated fat).

Chocolate alone does not cause caries.
Tooth caries are formed when bacteria in the mouth metabolize sugars and starches
from any type of food (soft drinks, candy, juice, bread, rice and pasta) to produce acid.
So in fact many foods contribute towards plaque build up which causes tooth decay.
Listen to the wise words of the dentist and ?brush at least twice a day? to routinely
and thoroughly remove the plaque and help prevent caries.

Any food that is energy dense (high in energy for its weight) can contribute towards weight gain.
But chocolate alone does not cause weight gain. If it is eaten in moderation and care is taken as to
what other energy dense foods are consumed, then it can be included in a healthy diet.
Chocolate contains polyphenols which have been shown to have many health benefits
including reducing risk of cancer and heart disease.

Some people claim that eating a lot of chocolate can bring on acne ? a common skin disease
characterised by white spots or blackheads over the face, upper chest and back.
While there are diets claimed to alleviate the symptoms of acne, no one food can be
held responsible for what is a disease influenced by hormones and genetics.
According to the Acne Resource Centre, hormones, overactive oil glands, heredity and
dead skin cells that lodge in skin pores are what cause acne, not chocolate!

Healthy chocolate, is there such a thing?
Dark chocolate is particularly high in polyphenols ? nutrients from plant sources that
have been shown to have many health benefits. Cocoa flavonoids, most notably catechins,
play a role in inhibiting many inflammatory processes that cause numerous diseases.

Milk chocolate is a good source of calcium and both types of chocolate (more so dark chocolate)
provide the body with a source of antioxidants. Also, let?s not forget chocolate?s ability
to boost morale.

Just be aware that chocolate is an energy dense food and to take into consideration
the other foods and drinks you consume during the day so you don’t go
right over the top of the calorie counter.

That is, after all, why it’s called a balanced diet! 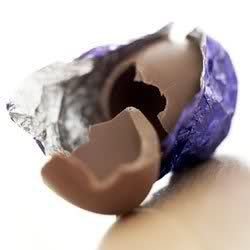