On my recent trip to India, two of the specialist doctors I consulted for Gout at SHALBY, Amdavad first and foremost checked my fingernails and with the formation of slight ridges on my finger nails indicated my lack of Iron (which was proved with positive with the blood test) and of course early stages of Arthritis?..

As far back as 3,000 BC Chinese physicians studied their patients fingernails for telltale signs of illness.

Thousands of years later, American country doctors, tending to their patients in small towns and farm villages, routinely checked patients’ eyes, the surface of the tongue, and the appearance of the fingernails.

Some knowledgeable practitioners still check these things, although most that do are doctors that practice holistic medicine.

Why did the ancients and the old-time country doctors take such an interest in their patients’ fingernails?

Because the nails often signal the presence of serious internal diseases, many that could become life threatening if overlooked or left untreated. 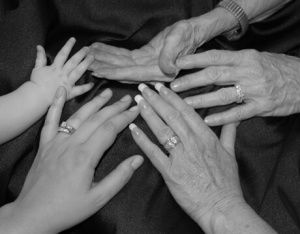 Have you checked your nails lately?

It may seem like an a strange question, but actually it’s not. The condition, strength, and color of your nails are good indicators of what’s going on inside you that you can’t see.

Holistic physicians analyze the nails and you can too, if you know what to look for when you check them. It’s a good idea to check your nails periodically (at least several times a year) to get an early warning about anything that may be dangerous cropping up inside you. 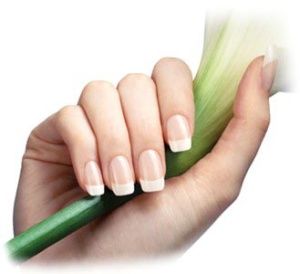 Healthy nails indicate a body that’s likely to be healthy too. If your nails are thin, discolored, easily broken, have thick ridges, or the skin around the nails is discolored ot unnatural, further investigation is merited.

No matter the race, normal nails should be pinkish and have a lighter pinkish-white area near their base. Nails that don’t appear like that are indicators that something is out of whack internally and a trip to the doctor may be in order. 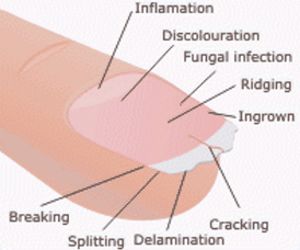 The five most dangerous signs

Nails that exhibit one or more of these properties are warning signs. If your nails have any of these telltale qualities it may be a good idea to see a doctor for a check-up as soon as you can. 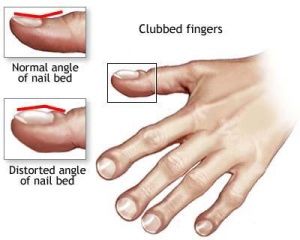 Clubbed nails are a very dangerous condition that warns of severe lung, bowel, or liver disease. If you notice your nails have skin that appears to have swollen, or the nails themselves have puffed out around your fingers seek medical help immediately. 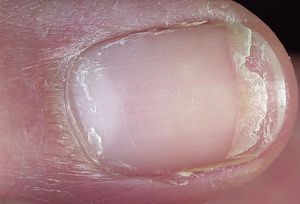 Splitting nails appear to be flaking away and the condition is chronic. Although the nails are warning of a malady, it’s not something that normally leads to death. Left untreated, however, illnesses signaled by splitting nails can become chronic, even severe. In most cases split nails result from ongoing malnutrition caused by poor diets, the beginning stages of psoriasis, or a significant lack of protein and possibly too little Vitamin C and folic acid in the diet. 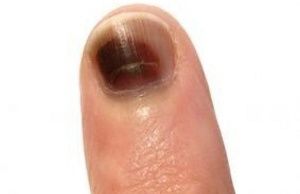 Discolored nails are the most common nail discolorations all indicate moderate to sever illness. Many who suffer from hepatitis are unaware they carry the disease. Monitoring the nails provides a clue: if the nails are a milky white color it may be a sign of a liver disease, such as hepatitus. Other colors are clues to other ailments: nails with dark stripes near the base are a sign of congestive heart failure; red streaks mean a possible infection of the heart valve; lack of sufficient oxygenated blood makes nails appear blue, while green nails signal a likely bacteriological infection.
If your nails appear similar to the photo see a doctor 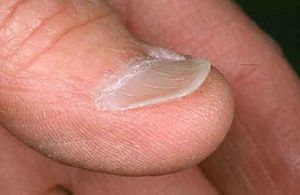 ‘Spoon’ nails are another major warning sign of something going seriously wrong internally. Spoon nails are concave and curved upward, sometimes curved enough so they actually appear like tiny spoons. The condition is created by a number of possible illnesses such as advancing heart disease, anemia, thyroid disorders (commonly hypothyroidism), or a malfunctioning liver that soaks up too much free iron from the blood (a malady known as hemachromatosis). 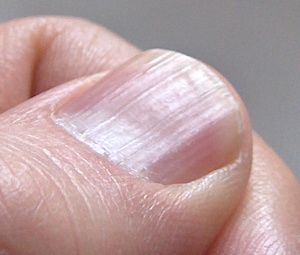 Other lesser conditions such as brittle nails (bacteria, thyroid, hormonal imbalances), pitted nails (insufficient zinc in the diet or psoriasis), and ridges (inflammatory arthritis or iron deficiency) should also be watched for all are early health warnings.

The body also signals problems in many other ways, that’s why the ancient physicians and today’s holistic medicine practitioners often check the eyes, tongue, and inner ears, some even take hair samples.

Yet, in the end, it’s you the patient who’s most responsible for your good health and maintaining it. Periodically checking your nails for early warnings of encroaching illnesses is another way to take charge of your body.