People often expect a heart attack to be dramatic like it is in the movies, but the reality tends to be different and can even go unnoticed. Here are the tell-tale signs and symptoms of a heart attack:

What happens during a heart attack?

During a heart attack, the blood flow to the heart muscle is either reduced or completely stops. This typically happens because of a blood clot that is blocking an artery. When the heart muscle does not get oxygen-rich blood, it ceases to work.

– A heart attack often causes chest pain.
– There is a feeling of fullness or a clasping pain in the center of the chest. Most victims describe the pain as akin to an elephant standing on the chest (extreme pain). It usually lasts for about 15 minutes.

– One also experiences shooting pain in the shoulders, neck, arm, back and sometimes even the teeth and jaw.

– Prolonged pain in the upper abdomen.

– Since the heart?s pumping action is severely impaired during a severe heart attack, the victim might lose his/her consciousness.

* In rare cases, as in patients who are diabetic, the heart attack may not be very painful, and sometimes can even be entirely painless.

Some symptoms that may also appear include:
Pain in the abdomen
Heart burn
Unusual tiredness
Nausea
Tightness or pain in the neck, shoulders or upper back 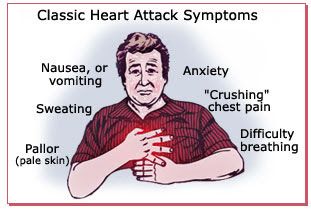 Heart attack symptoms are not the same for everyone

Not everyone who has a heart attack has the same symptoms. Many a time, we also tend to ignore a heart attack thinking it might be mere abdominal discomfort due to gas pains or indigestion. If you have more than a few of the symptoms listed above, then you are likely to be having one. Get emergency help immediately.

What to do in case of a heart attack?

Rush to a hospital. Immediately. If you recognize that you or someone around you is having a heart attack, get immediate medical help.

Take Disprin (Asprin): As soon as you recognize it is an attack, crush a disprin, dissolve it in water and make the person drink it.

A heart attack is different from a cardiac arrest 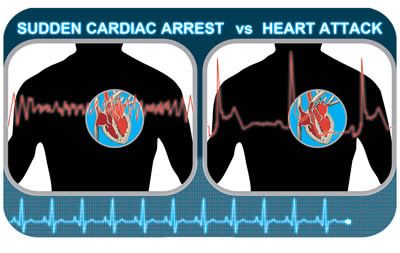 Do not confuse a heart attack with cardiac arrest. In the case of cardiac arrest, the heart suddenly stops. It occurs due to an electrical disturbance that obstructs the heart?s pumping function, which results in stopping blood flow to the rest of the body. Below are two fact files detailing the differences between a heart attack and cardiac arrest:

SCA is a chaotic electrical condition of the heart resulting in the loss of blood flow to the brain and body. The most common form of SCA is ventricular fibrillation.

Causes
Electrical impulses of the heart become chaotic due to a blow to the chest or other (sometimes-unknown) health-related issues. As a result, the heart stops beating regularly and begins to flutter rapidly.

Symptoms
Typically, there are no symptoms to SCA. Usually, the first indication of SCA is when the victim faints. The second sign is breathing cessation.

Risk of Death
A victim of SCA will die unless treated. If left untreated, the chances of survival decrease by 10% per minute. Typically, permanent brain damage occurs within 5-7 minutes.

Treatment
The only treatment for SCA is defibrillation from an automated external defibrillator (AED). A shock from the AED stops the chaotic electrical activity and allows the heart’s sinus node to resume a normal electrical impulse.

The medical term for a heart attack is myocardial infarction: a blockage of the coronary arteries leading to a decrease in blood flow. When this happens, the heart muscles die or become permanently damaged.

Causes
Plaque made of cholesterol and other cells builds up in the walls of the heart?s arteries. When the build-up is great enough, the plaque creates a blockage, known as an occlusion, which restricts the blood supply to the heart muscle.

Symptoms
Warning signs of a heart attack include a tightening feeling in the chest, a sore or numb left arm, lower back, neck, and/or jaw. Other signs include bad indigestion, a feeling that something heavy is sitting on your chest, and shortness of breath.

Victim’s Response
The victim of a heart attack is usually conscious and alert.

Risk of Death
Most victims can recover fully and lead normal lives, but about a third of heart attacks are deadly. A heart attack can lead to sudden cardiac arrest.

Treatment
One treatment of a heart attack can be angioplasty, which opens up the blocked vessels with a medical balloon. Afterwards, a stent can be placed in the artery to help keep it open. Other treatments include clot-busting drugs called thrombolytics or nitroglycerin to reduce chest pain.

So, remember this information, and most of all, remember the ABCs of heart care: Avoiding Tobacco, stress and fatty foods, Being more active and Choosing the right nutrition and life style that will keep your heart healthy!