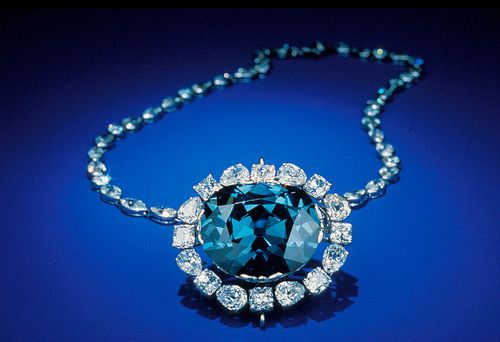 The Hope Diamond is not only one of the most famous gems in the world, but it is also one of the largest blue diamonds (4th�largest). It’s physical value might be estimated but it’s historical importance is priceless. It is so old that no one knows exactly when it was discovered. However, it already had an owner in 1668, in the person of an Indian slave who claimed that the 112 carats stone (which he believed to be a sapphire) came from the eye of an idol. Jean Baptiste Tavernier, a traveler and a gem merchant bought it and sold it afterwards to King Louis XIV of France. Its price today is estimated at $250 million. The legend says that this diamond was�cursed�by the Hindu priests of the temple from where it was stolen. 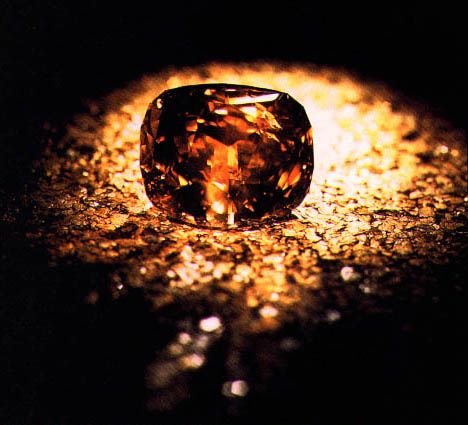 The Golden Jubilee is holding the title of the world’s largest faceted diamond in the world, measuring 545,67 carats. It was discovered in 1985, in the Premier mine of South Africa. At first, it was considered an ugly brown diamond. Gabriel Tolkowsky received the diamond, which was supposed to be used at testing some new tools and cutting methods. The result astonished everyone. It turned out that the Unnamed Brown was actually a very beautiful yellow-brown diamond. It remained unnamed until it was presented to the king of Thailand in 1997, for the 50th�anniversary of his coronation (thus, its name). 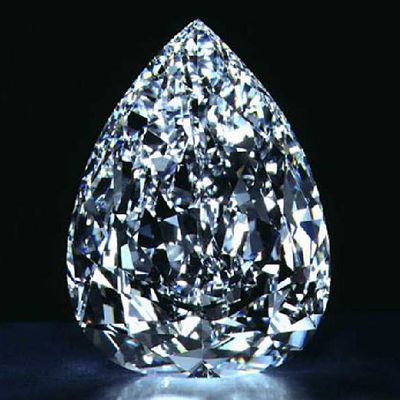 One of the most famous diamonds in the world, Cullingam I was justly considered the largest diamond in the world up to the discovery of the Golden Jubilee. Also known as The star of Africa, the pear-shaped stone is the largest of the 9 diamonds cut from the largest rough diamond ever, the Cullinan diamond(3106,75 carats). Currently, it is the head of St. Edward’s scepter, one of the British Crown Jewels but it can be removed and worn as a brooch. 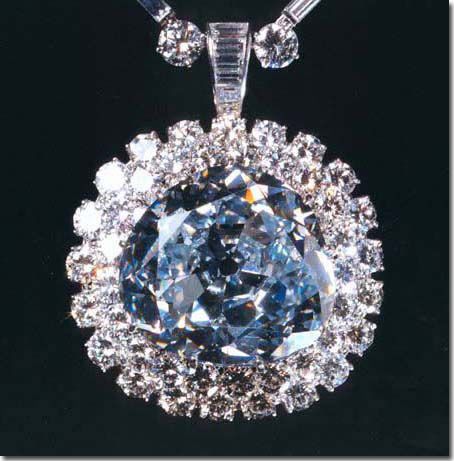 The idol’s eye is one of the most mysterious diamonds in the world. Its entire history is unknown; we have no idea where it came from, when it was discovered or who owned it. The only clue is its name, The Idol’s Eye. It appeared in a note, at Christie’s when it was described as a flawless large diamond. It was bought by an anonymous buyer and disappeared again for some years. Its owners changed several times afterwards and was bought in 1979 by Mr. Laurence Graff, who sold it again in 1983, to an anonymous buyer who is believed to own the diamond today.

5. The Spirit of de Grisogono 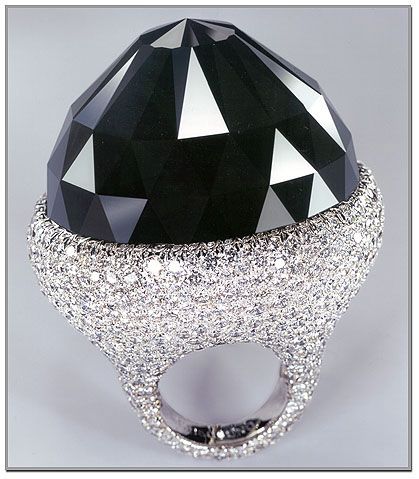 This is one of the famous diamonds in the world. It is also known as the largest cut black diamond, and it measures 312, 24carats. This beautiful diamond was named after the Swiss jeweler who cut it, using the old Mogul style. The result was the jewel you see in the picture and it is the work of an entire year. Currently, it is owned by a private client, who must be a very fortunate person. 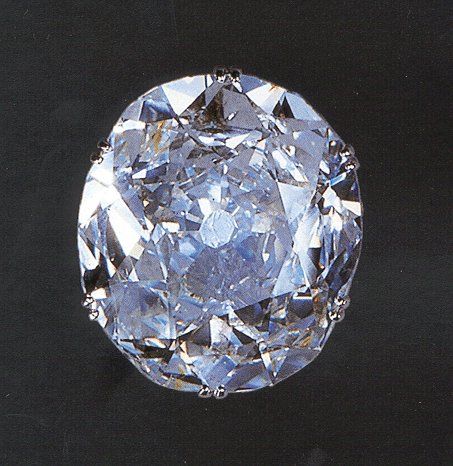 Apparently, this is one of the oldest diamonds known to man. According to the legend, this diamond is more than 2000 years old, from before the birth of Christ. However, a much more documented hypothesis is that it was discovered in the early 1300s. The earliest recorded mention of the diamond is in the memories of Babur (Baburnama), the first Mogul ruler of India. It then passed through many hands and its long, complex history cannot be told here. It suffices to say that the diamond arrived to England in the 19thcentury and entered the possession of Queen Victoria. Not satisfied with its cutting, which caused it to shine less than it should have, the queen had it recut, which meant a loss of weight of almost 43%. It was then set in the queen’s crown,in frontal position. India did not give up one of its most precious gems easily. The Indian government continued to ask the return of the diamond, with no success. 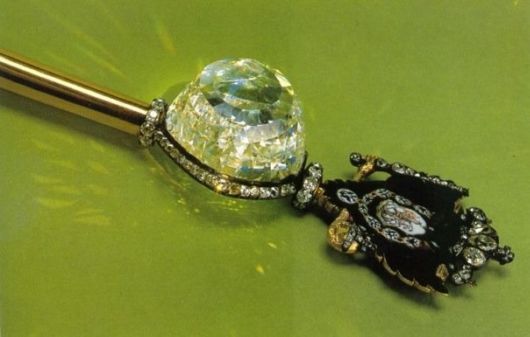 The Orlov is one of the most intriguing diamonds in the world. It has a blurry past and it is said that it was stolen from an idol, where the stone stood as one of the eyes of the statue. However, many questions remain: First, if this is true, what happened to the other eye? Could it have been the above mentioned Koh-I-Noor? Another theory is that the Orlov diamond is actually the legendary stone called the Great Mogul, which was only described by Jean Baptiste Tavernier and it was lost forever centuries ago. Whatever the truth, The Orlov diamond is now in the possession of the Russian government and it is set in the Imperial scepter. It is estimated at 189 carats but its historical value cannot be priced. 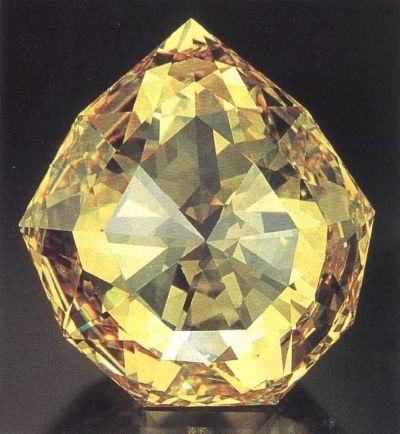 The Florentine is an enigmatic diamond which is believed to have a light yellow color, with a green overtone and an estimated 137 carats. Its known history starts with the duke of Burgundy in the 15th�century. Apparently, he died in battle while wearing the diamond. The stone was stolen from him by a peasant who sold it for a florin, because he thought it was mere glass. It then changed owners several times, for small amounts of money. In the 17th�century, we find the Florentine in the possession of the Medici familly. When the last Medici died, the diamond arrived in Vienna, and became one of the Habsburg Crown Jewels. After the World War I, it was stolen and never found again, though a particular diamond was believed to be the lost one, because of its similarities with the Florentine.

9. The Heart of Eternity 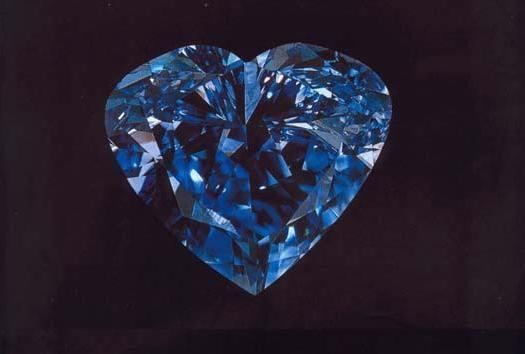 The diamond which bears such a romantic name is measuring 27,64 carats . It was found in a mine in South Africa and it has a fancy vivid blue color, making it an extremely rare diamond. Apparently, the blue color is given by impurities of boron and most of the gems are not entirely blue. The stone was an impressive 777 carats when found and caused a rush among diggers, who started to dig like crazy, trying to find another one. However, experts estimate that such a discovery is not likely to occur in the next several hundred years. 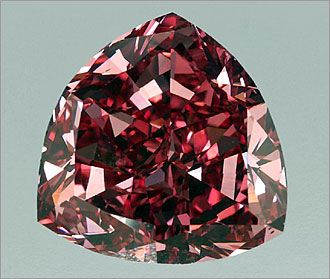 This gem is of an amazing beauty and it is estimated at 5, 11 carats. It has a triangular brilliant cut (it features numerous facets, which offer it great brilliance). Its amazing color was established to be fancy red by the Gemological Institute of America. One of the most famous diamonds in the world, the Moussaieff Red was first discovered by a Brazilian digger in the Abaetezinho River in 1990 and it is believed to have had 13.9 carats.