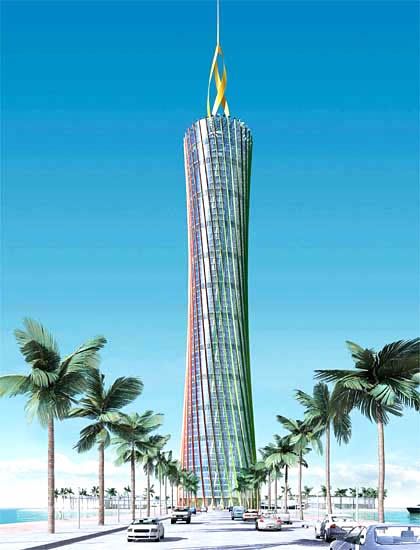 This skyscraper, to be built in Dubai, is called the Burj al-Taqa (?Energy Tower?), and it will produce 100% of its own power. The tower will have a huge (197 foot diameter) wind turbine on its roof, and arrays of solar cells that will total 161,459 square feet in size. Additional energy is provided by an island of solar panels, which drifts in the sea within viewing distance of the tower. 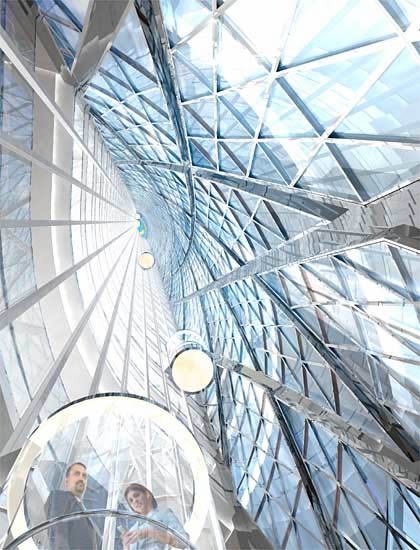 Burj al-Taqa?s cylindrical shape is designed to expose as little surface area to the sun as possible. A protective solar shield reaches from the ground to the roof, covering 60 degrees of the giant circular building. It protects the side most affected from the sun?s glaring rays, making sure that none of the rooms are exposed to direct sunlight. The diffuse light on the other sides of the building is tempered by a mineral coating on the windows. 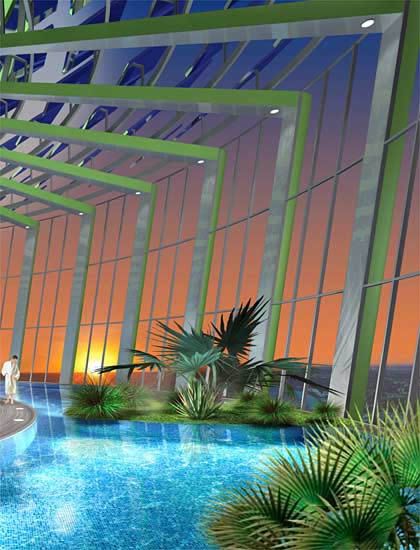 The tower?s façade is to be built from a new generation of vacuum glazing that will only come on the market in 2008.

The new top-quality windows are meant to largely shield the interior of the tower from outside heat ? indispensable in a region where outside temperatures can reach 50 degrees Celsius (122 degrees Fahrenheit) in the summer.

This is made possible by a new breakthrough in the quality of the materials used: The new vacuum glazing windows transmit as much as two thirds less heat compared to today?s products. The architects chose an ancient Persian architectural feature as their model. Hundreds of years ago, wealthy merchants erected wind towers on the roofs of their houses, an idea which was eventually exported to the Arab world.

The buildings, which have now become tourist attractions, have a natural air conditioning system. Lateral openings in the towers suck in cool air like a chimney.

The heavier cool air sinks down and displaces the lighter hot air, creating a comfortable temperature inside the living space despite the scorching sun. Gerbers?s design is designed to function in a similar way:

The negative pressure created by winds breaking along the tower will suck the spent air from the rooms out of the building via air slits in the façade. The plan is for fresh air to be pumped into the interior of the building by means of a duct system at the same time. Seawater will be used to pre-cool the air.

Three large cooling units in the giant building?s cellar will eventually lower the temperature to a comfortable 18 degrees Celsius (64.4 degrees Fahrenheit). Transparent ducts will channel the fresh air into spacious atriums and from there into the corridors and offices. The building?s designers want to use high-quality steel ropes to suspend hanging gardens inside the air ducts, transforming a feature which is often regarded as an architectural blemish and hidden behind sheet metal in other buildings.

At the same time, the underground cooling center also cools the water in the pipelines running through the underside of each floor?s ceiling. The system of tubes is designed to be a modern air-conditioning system which cools gently without unpleasant air currents. The Burj al-Taqa seems like the most recent example of a trend that has been observable for some time. In large cities such as Chicago, New York or Paris, environmentally friendly skyscrapers are being built that win ecological awards and apparently herald a new green wave in the construction of tall buildings.