The Earth Observatory is a website run by NASA’s Earth Observing System Project Science Office (EOSPSO). Bringing together imagery from many different satellites and astronaut missions, the website publishes fantastic images with highly detailed descriptions, feature articles and more. Gathered here are some standout photographs from the collections in the Earth Observatory over the past several years. For more images and information, please visit the Earth Observatory site itself.. 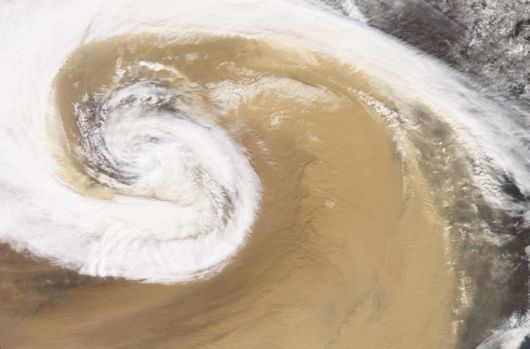 The Moderate Resolution Imaging Spectroradiometer (MODIS) on NASA’s Terra satellite captured this image of a dust storm as it swirled over China in April of 2001. A strong temperate cyclone spun counter-clockwise over China, pushing a wall of dust as it moved. The deep tan dust is not only thick enough to completely hide much of the land surface below, but it almost forms its own topography, with ridges of dust rising up below the clouds. The spiral arms of white cloud are approximately 200km wide. (NASA/Jesse Allen, Robert Simmon/MODIS science team) 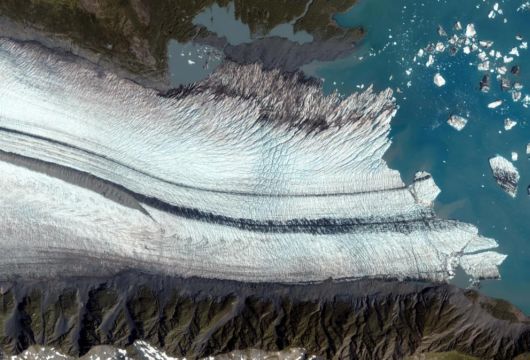 The Bear Glacier on the Kenai Peninsula along the Gulf of Alaska seen by the IKONOS satellite took this on August 8, 2005. This image shows the ablation zone where the glacier is primarily losing ice. Upslope from the lake, the foot of the glacier is riddled with crevasses – cracks in the ice caused by the glacier’s movement over a rough surface. Down the middle of the glacier run dark gray stripes. As a glacier moves, it picks up dirt and debris from the rocks it passes. When two glaciers merge, as they have here, the dirt and debris they carry form parallel stripes, or medial moraines, on the ice surface. (IKONOS satellite image courtesy GeoEye) 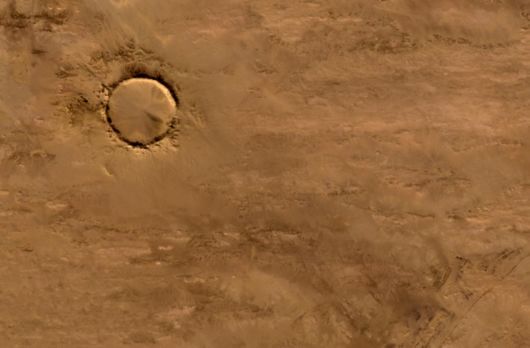 Deep in the Sahara Desert lies this crater. Nearly a perfect circle, it is 1.9 kilometers (1.2 miles) wide, and sports a rim 100 meters (330 feet) high. The crater sits in a vast plain of rocks so ancient they were deposited hundreds of millions of years before the first dinosaurs walked the Earth. Modern geologists long debated what caused this crater, some of them favoring a volcano. But closer examination of the structure revealed that the crater’s hardened "lava" was actually rock that had melted from a meteorite impact. Advanced Spaceborne Thermal Emission and Reflection Radiometer (ASTER) on NASA’s Terra satellite captured this image of Tenoumer Crater in Mauritania on January 24, 2008. (NASA,Jesse Allen, NASA/GSFC/METI/ERSDAC/JAROS, U.S./Japan ASTER Science Team) 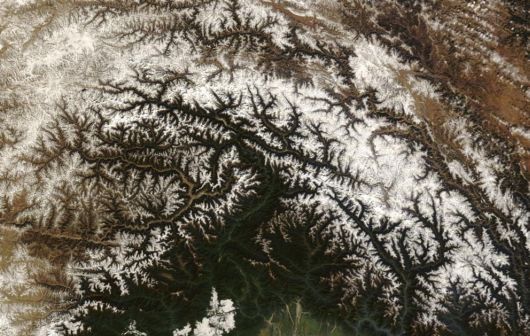 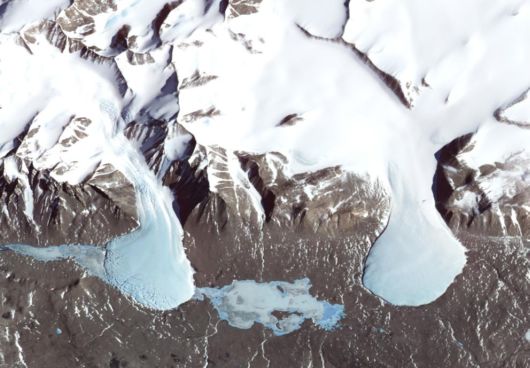 Two cyclones are seen, after forming in tandem in November 2006. The Moderate Resolution Imaging Spectroradiometer (MODIS) onboard NASA’s Terra satellite took this picture of the two cyclones south of Iceland on November 20 (South is up in image). (NASA/Jesse Allen, Earth Observatory) 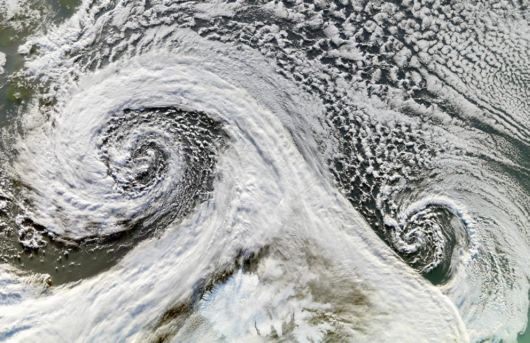 8
Even the most snow-covered place on Earth has patches of snow-free ground. In Antarctica, a series of parallel valleys lie between the Ross Sea and the East Antarctic Ice Sheet. Known as the Dry Valleys, they are swept free of snow by nearly relentless katabatic winds – cold, dry air that rolls downhill toward the sea from the high altitudes of the ice sheet. The Dry Valleys harbor a collection of glaciers and ice-covered lakes. This false-color image was captured by the Advanced Spaceborne Thermal Emission and Reflection Radiometer (ASTER) on NASA’s Terra satellite on November 29, 2000. (NASA/Jesse Allen, NASA/GSFC/METI/ERSDAC/JAROS, U.S./Japan ASTER Science Team) 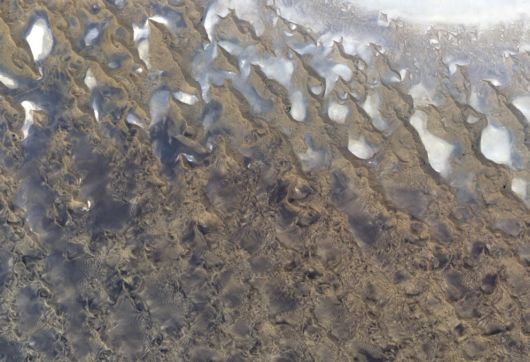 Roughly 480 by 320 kilometers, Dasht-e Lut is a large salt desert in southeastern Iran. This natural-color image, captured by the ASTER on NASA’s Terra satellite shows part of the southeastern portion of Dasht-e Lut on May 13, 2006. This area consists of sand, and it contains some of the world’s tallest dunes, some reaching a height of 300 meters (1,000 feet). 9NASA/Jesse Allen, Earth Observatory, NASA/GSFC/MITI/ERSDAC/JAROS, U.S./Japan ASTER Science Team) 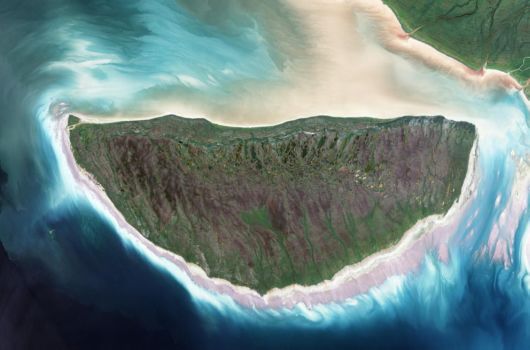 During the last ice age, Canada’s Akimiski Island was buried under several thousand meters of ice, but since its retreat, the island has rebounded (risen in elevation) and new beach areas have emerged, streams and lakes have formed, and trees and other vegetation have colonized the new territory. This image of Akimiski Island was captured by the Landsat 7 satellite on August 9, 2000. (NASA/Jesse Allen, Landsat,University of Maryland’s Global Land Cover Facility) 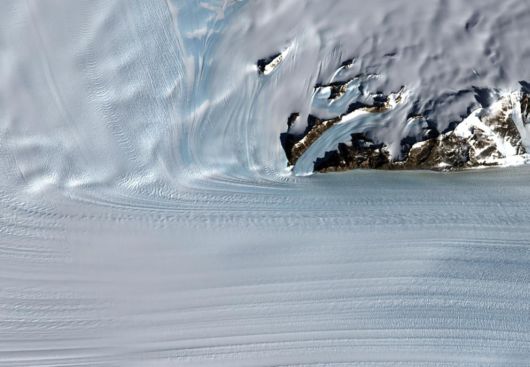 Steep Antarctic mountains channel the flowing ice sheet into a fast-moving river of ice named Byrd Glacier located near McMurdo Station, the principal U.S. Antarctic Research Base. The glacier plunges through a deep, 15-mile-wide valley in the Transatlantic Mountains to create a 100-mile-long, rock-floored ice stream. This image, captured by the Landsat 7 satellite on December 24, 1999, shows part of the Byrd Glacier flowing through the Transatlantic Mountains. (Jesse Allen, Landsat Image Mosaic of Antarctica,LIMA) 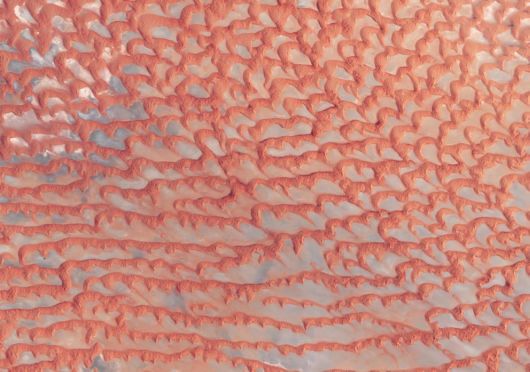 The Arabian Peninsula’s Empty Quarter, known as Rub’ al Khali, is the world’s largest sand sea, holding about half as much sand as the Sahara Desert. The Empty Quarter covers 583,000 square kilometers (225,000 square miles), and stretches over parts of Saudi Arabia, Yemen, Oman, and the United Arab Emirates. The Enhanced Thematic Mapper on NASA’s Landsat 7 satellite captured this image of the Empty Quarter on August 26, 2001. (NASA/Robert Simmon, Landsat,USGS) 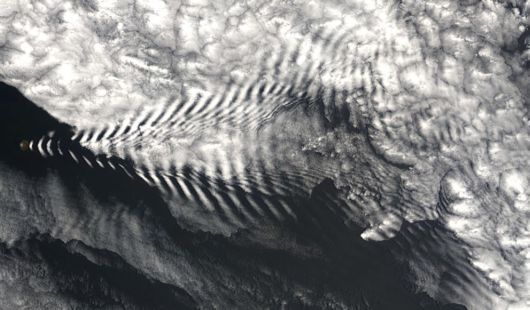 In mid-December 2005, the diminutive Amsterdam Island made waves – not in the Indian Ocean where it resides, but in the clouds overhead. The MODIS instrument aboard NASA’s Terra satellite captured this image on December 19, 2005. The island itself is almost too small see in this image, but it serves as the starting point for the clouds that flow toward the northeast in a giant V shape. (NASA/Jeff Schmaltz, MODIS Land Rapid Response Team at NASA GSFC) 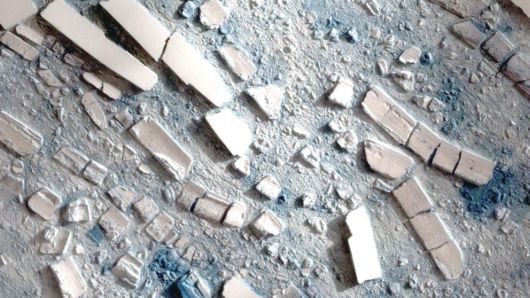 This highly detailed image from the Taiwanese Formosat-2 satellite shows the different sizes, shapes, and textures of ice fragments from an ice shelf on the Antarctic Peninsula on March 8, 2008. Several large icebergs float amid a mosaic of smaller pieces of ice. The level of detail in the image is so great that it can seem as though you are standing over a scale model made out of papier-mâché and foam blocks. The detail can make the bergs seem deceptively small. In reality, some of the large bergs are several hundred meters (yards) long. (Formosat image © 2008 Dr. Cheng-Chien Liu, National Cheng-Kung University and Dr. An-Ming Wu, National Space Organization, Taiwan) 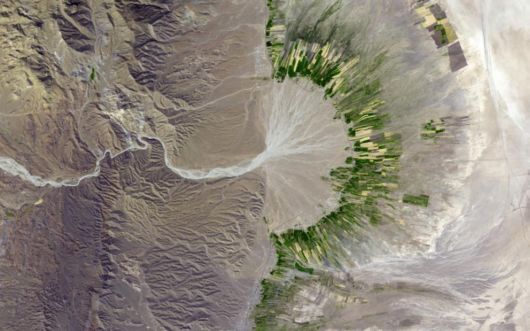 This simulated natural-color image of southeastern Fars province in southern Iran shows a dry river channel carving through arid mountains toward the northeast. A broad belt of lush agricultural land follows the curve of the alluvial fan and stretches out along a road that runs parallel to the ridgeline. The valley-ward margin of the intensely green agricultural belt fades to dull green along streams (or irrigation canals). The image was captured by the Advanced Spaceborne Thermal Emission and Reflection Radiometer (ASTER) on NASA’s Terra satellite on October 12, 2004. (NASA/Jesse Allen, NASA/GSFC/METI/ERSDAC/JAROS, U.S./Japan ASTER Science Team) 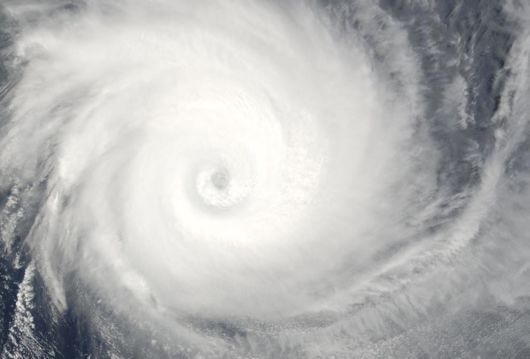 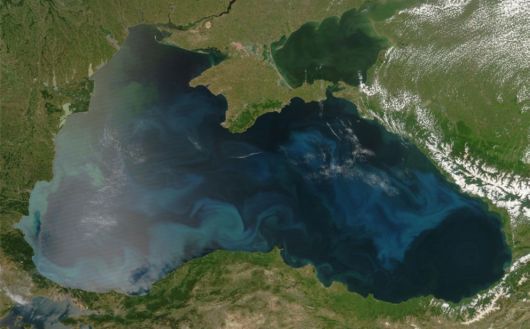 This image shows a colorful bloom of phytoplankton throughout the Black Sea on June 4, 2008, along the southern coast near the Turkish cities of Sinop and Samsun. The natural-color image was captured by the MODIS instrument on NASA’s Aqua satellite. (NASA/MODIS Rapid Response Team) 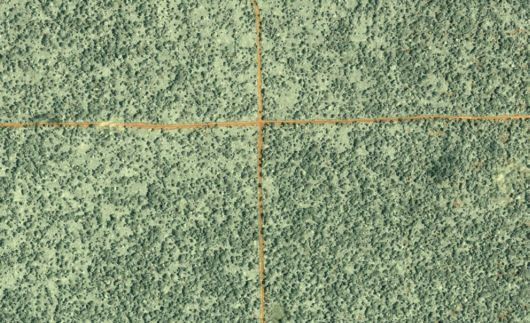 This image of forest in the northern Republic of Congo was captured on June 27, 2002, by the commercial satellite Ikonos. Dirt logging roads (orange lines) cross the center of the image. This image is one of hundreds of satellite images from commercial and NASA satellites that scientists from the Woods Hole Research Center used to create a map of logging roads and forest disturbance across 4 million square kilometers of tropical African forests in the three decades proceeding 2003. (NASA /Jesse Allen, IKONOS, Nadine Laporte, Woods Hole Research Center) 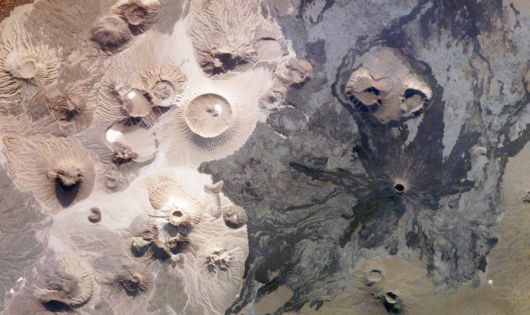 Harrat Khaybar in Saudi Arabia contains a wide range of volcanic rock types and spectacular landforms, several of which are represented in this photograph taken by an astronaut abourd the International Space Station on March 31, 2008. Jabal ("mountain" in Arabic) al Qidr is built from several generations of dark, fluid basalt lava flows. Jabal Abyad, in the center of the image, was formed from a more viscous, silica-rich lava classified as a rhyolite. (NASA-JSC) 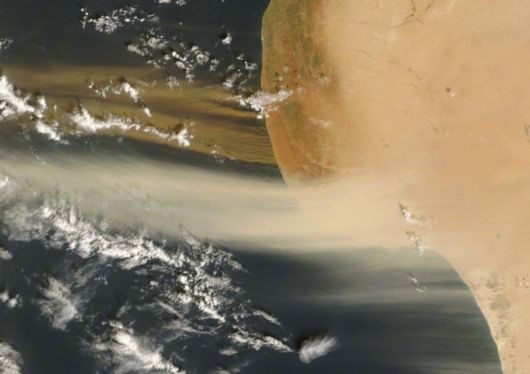 Two-toned dust plumes blew northward off the coast of Libya on October 26, 2007, as the MODIS instrument on NASA’s Terra satellite took this picture. While plumes in the west are beige, reminiscent of the Sahara’s sands, the plumes in the east are distinctly darker. (NASA/Jeff Schmaltz, MODIS Rapid Response Team, NASA-Goddard Space Flight Center) 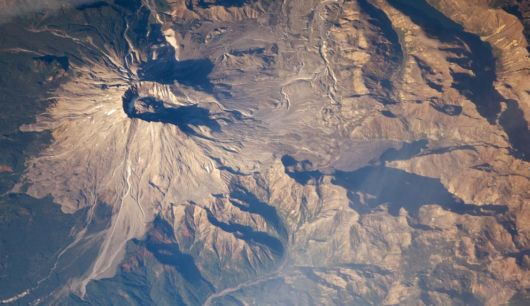 When Mount St. Helens erupted on May 18, 1980, the north face of the mountain collapsed, and a massive avalanche of rock, mud, and volcanic debris thundered down the mountain. this photograph, taken on October 28, 2008 by an astronaut aboard the International Space Station shows the scene nearly three decades after the eruption – the impact on the forest in the blast zone still obvious. South of the mountain, lush green forests cover the landscape, while north of the mountain, vegetation remains sparse, particularly on higher elevations. (NASA/JSC) 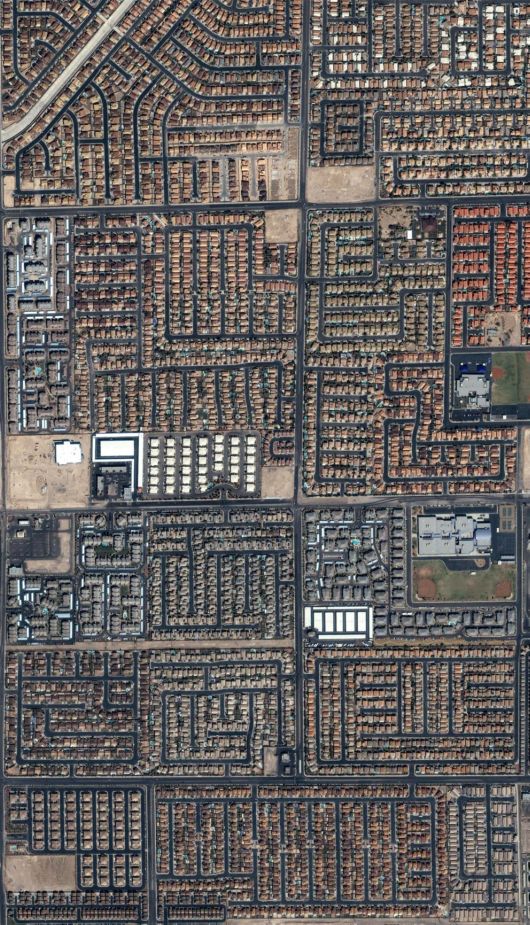 Houses and streets in bustling Las Vegas, Nevada are seen in this image from the commercial IKONOS satellite taken in September of 2004. (IKONOS image ©2004 GeoEye) 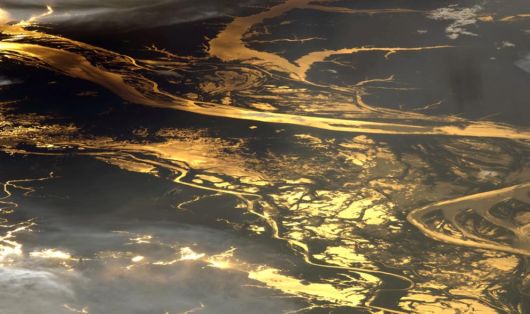 The setting sun glints off the Amazon River and numerous lakes in its floodplain in this astronaut photograph from August 19, 2008. About 150 kilometers of the Amazon is shown here, about 1,000 kilometers inland from the Atlantic Ocean. This image was acquired on August 19, 2008 by the by the Expedition 17 crew of the International Space Station. (NASA/JSC)