Japan saw most of its infrastructure bombed back to the stone age in the final years of World War II, which makes the country’s post-war rejuvenation all the more astounding. Huge, complex public works projects saw a concrete & steel web of highways, bridges and interchanges blossom from the wreckage of war. 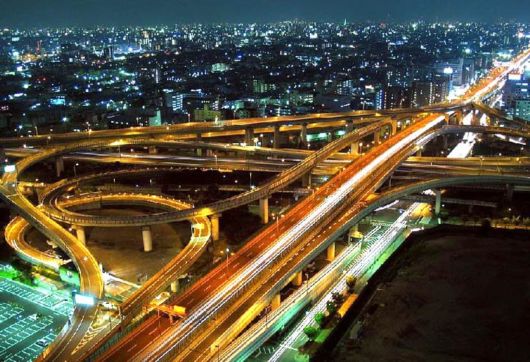 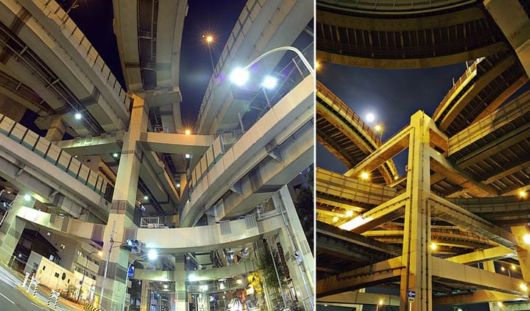 Above left is the Hakozaki Junction, part of the Metropolitan Expressway in Tokyo, and at right is the Hokko Junction in Osaka… These images illustrate the solution engineers used when building multi-lane highway interchanges in some of the world’s most crowded cities in Japan: go vertical! 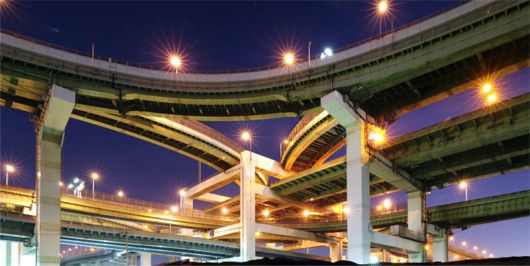 Ken Ohyama has made it his mission to chronicle some of the more striking Japanese roadworks in a Flickr series called Interchange and a book of his photos available from Amazon. One of the more outstanding examples is The Hokko Junction shown above – a part of the Hanshin Expressway near Japan’s second city, Osaka. 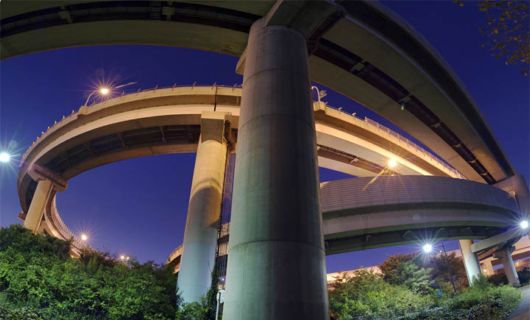 Also in Osaka is the Higashiosaka (East Osaka) Loop of the Hanshin Expressway. The photographer’s technique gives the sweeping curve of the roadway an almost tubular appearance: 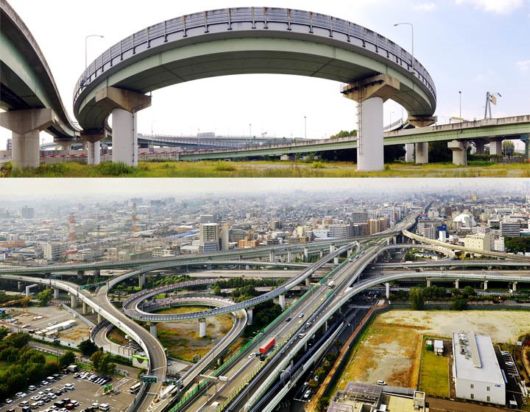 When engineers have space to work with, they take full advantage. This wide field view of the Higashiosaka interchange shows the almost organic complexity of a busy cloverleaf, resembling a living creature’s circulatory system with the vehicles acting as blood cells.

Highways upon highways… without any end in sight: 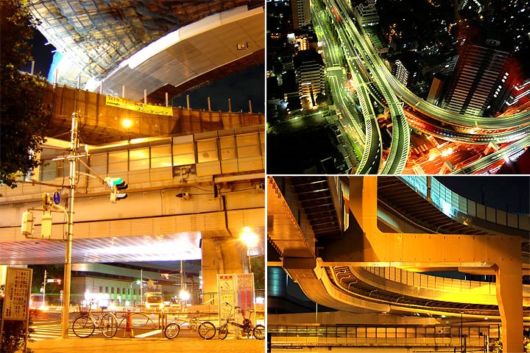 One interesting feature of Japanese elevated highways: they often run above rivers or sea channels, using the available space above the water. Here are some of these "highways on the sea" –

The incredible Japanese road infrastructure really took off in the 1960s – check out the vintage photo on the right: 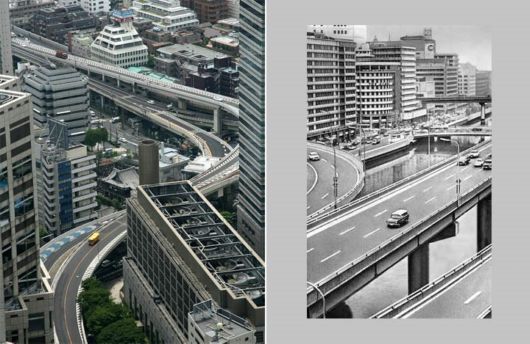 Such "Bladerunner" sights are commonplace now, brimming with urban energy – 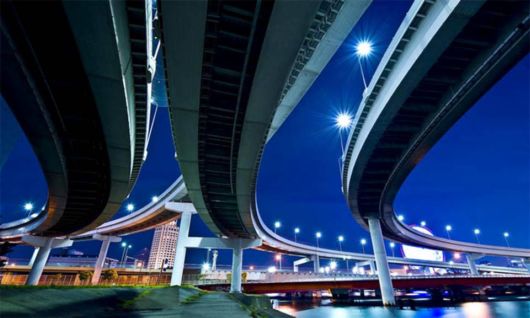 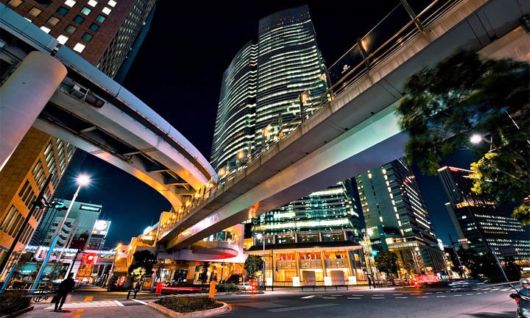 By the way, for the tricky "urban density" photography, head over to this page… and see if you can spot something wrong with the image there.

Some sections of the Hanshin Expressway suffered severe damage during the 7.2 magnitude Great Hanshin Earthquake which hit the Kobe, Japan area in January of 1995, killing over 5,500 people and costing over $200 billion. 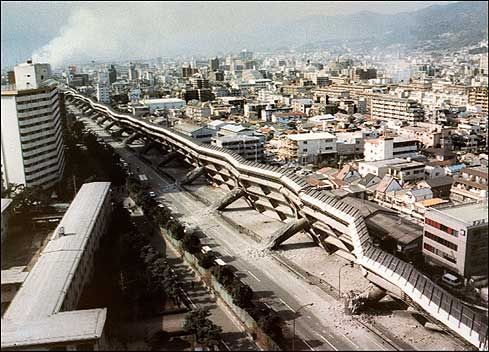 On the bright side, the affected sections of the highway did not "pancake", as happened in the 1989 Loma Prieta quake, but instead slipped sideways and tumbled over. Either way, one doesn’t want to be driving through a highway interchange or junction when a big quake hits!

Public works spending has long been the Japanese government’s preferred way to spend budget surpluses, boost employment, keep the ruling party’s supporters in the construction industry loyal, or all of the above. The highway depicted below is one of those projects, steadily overtaking a quiet city street like Godzilla in slow motion.

Which came first, the highway or the building? The question is moot as both have learned to accommodate one another. The Hanshin Expressway takes a shortcut through the 5th to 7th floors of Fukushima’s Gate Tower building, also known as the Bee Hive. 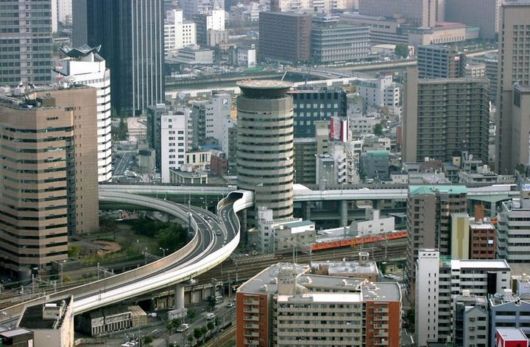 The story goes that the original building’s owner wanted to knock it down and rebuild, but was told by city planners that the space was being allocated to a newly planned exit of the expressway. Both sides refused to budge, and the compromise was completed in 1992. 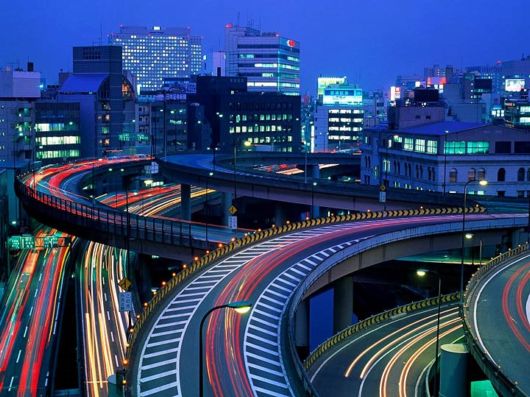 Tokyo residents can easily avoid using the highways and expressways which crisscross the city, thanks to one of the world’s largest and most efficient subway systems, but when traffic is light they can be a pleasure to drive. The view can be pretty intense, as in the time-lapse photo below: 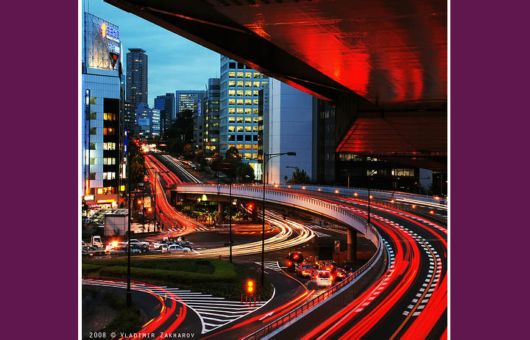 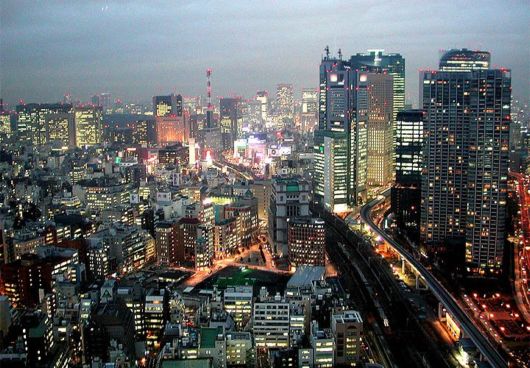 The Rainbow Bridge and the longest suspension bridge

Dark Roasted Blend has been covering some rather fascinating bridges before. Here are a few more – a spectacular sample from Japan. The 570 meter (1,870 ft) long Rainbow Bridge spans the northern (inner) part of Tokyo Bay and has been a city landmark since it opened in 1993. Two roadways, a transit line and pedestrian walkways all use the bridge, resulting in a seemingly chaotic tangle from certain angles. 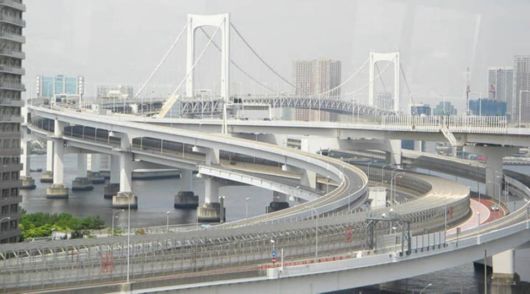 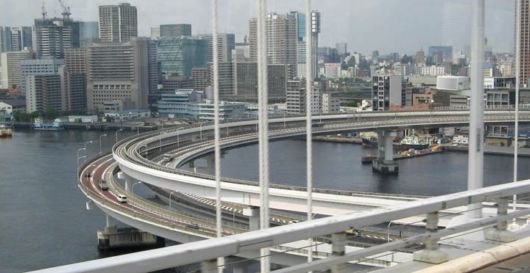 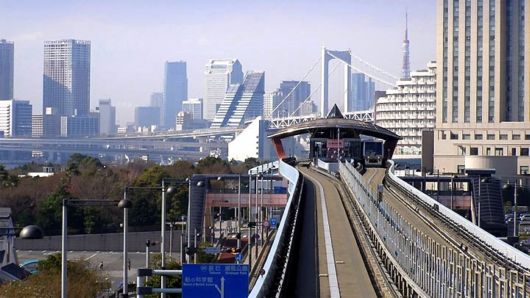 It’s at night, however, that the Rainbow Bridge comes alive with signature color! Spotlights mounted at strategic locations bathe the bridge’s superstructure in prismatic glory. Best of all, the lighting is solar powered with energy stored during the day powering the light show at night: 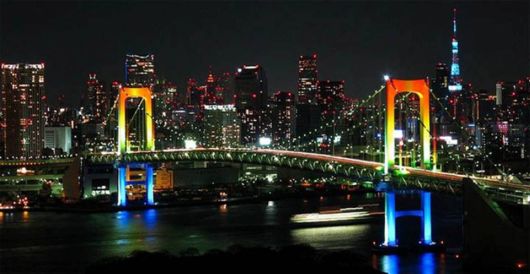 Announced in 1969, the massive Kobe-Naruto highway route project stretches 81 kilometers to connect Japan’s main island of Honshu with the much smaller island of Shikoku to the south. The jewel in the crown is the 4-kilometer long Akashi Kaikyo Bridge, which cost $3.6 billion to build over the ten year period between 1988 and 1998: 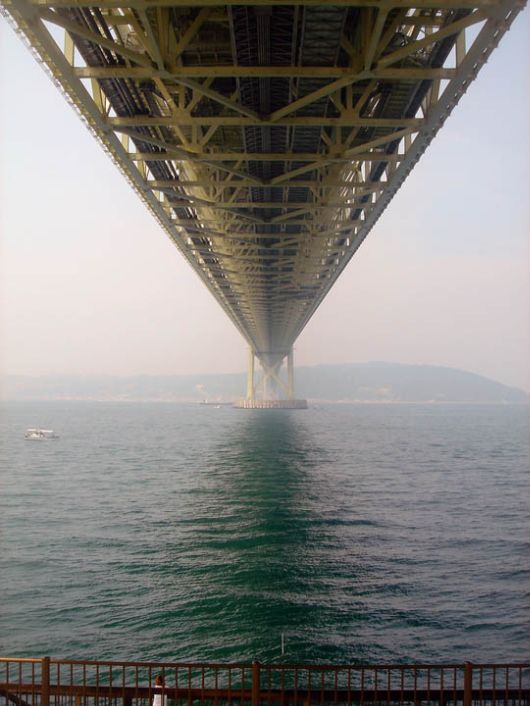 Of course, any discussion of Japanese highways wouldn’t be complete without mention of Mount Fuji. The mountain’s iconic snowy peak is visible from Tokyo – on clear days, at least – but though it’s certainly possible to reach the dormant volcano’s doorstep via highway, taking the Shinkansen bullet train is a better bet.