ALEXANDRIA, Va. — Ready for the latest in spa pampering? Prepare to dunk your tootsies in a tank of water and let tiny carp nibble away.Fish pedicures are creating something of a splash in the D.C. area, where a northern Virginia spa has been offering them for the past four months. John Ho, who runs the Yvonne Hair and Nails salon with his wife, Yvonne Le, said 5,000 people have taken the plunge so far. 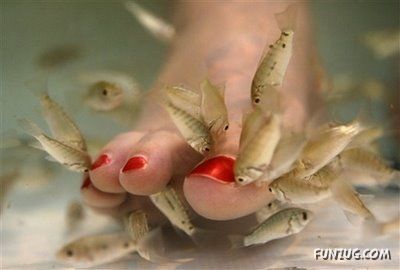 This is a good treatment for everyone who likes to have nice feet," Ho said.He said he wanted to come up with something unique while finding a replacement for pedicures that use razors to scrape off dead skin. The razors have fallen out of favor with state regulators because of concerns about whether they’re sanitary.Ho was skeptical at first about the fish, which are called garra rufa but typically known as doctor fish. They were first used in Turkey and have become popular in some Asian countries.But Ho doubted they would thrive in the warm water needed for a comfortable footbath. And he didn’t know if customers would like the idea."I know people were a little intimidated at first," Ho said. "But I just said, ‘Let’s give it a shot.’ "Customers were quickly hooked.Tracy Roberts, 33, of Rockville, Md., heard about it on a local radio show. She said it was "the best pedicure I ever had" and has spread the word to friends and co-workers. 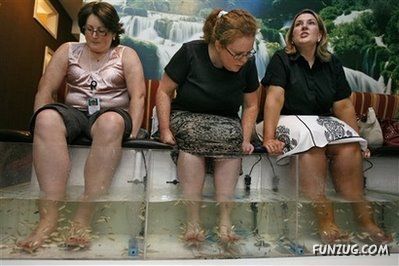 "I’d been an athlete all my life, so I’ve always had calluses on my feet. This was the first time somebody got rid of my calluses completely," she said.First time customer KaNin Reese, 32, of Washington, described the tingling sensation created by the toothless fish: "It kind of feels like your foot’s asleep," she said.The fish don’t do the job alone. After 15 to 30 minutes in the tank, customers get a standard pedicure, made easier by the soft skin the doctor fish leave behind.Ho believes his is the only salon in the country to offer the treatment, which costs $35 for 15 minutes and $50 for 30 minutes. The spa has more than 1,000 fish, with about 100 in each individual pedicure tank at any given time.Dennis Arnold, a podiatrist who four years ago established the International Pedicure Association, said he had never heard of the treatment and doubts it will become widespread."I think most people would be afraid of it," he said.Customer Patsy Fisher, 42, of Crofton, Md., admitted she was nervous as she prepared for her first fish pedicure. But her apprehension dissolved into laughter after she put her feet in the tank and the fish swarmed to her toes."It’s a little ticklish, actually," she said.Ho said the hot water in which the fish thrive doesn’t support much plant or aquatic life, so they learned to feed on whatever food sources were available — including dead, flaking skin. They leave live skin alone because, without teeth, they can’t bite it off. 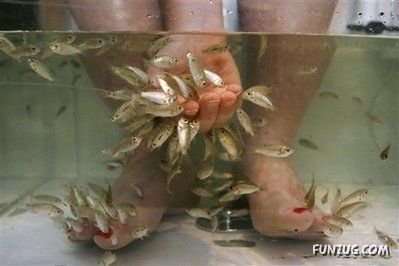 In addition to offering pedicures, Ho hopes to establish a network of Doctor Fish Massage franchises and is evaluating a full-body fish treatment that, among other things, could treat psoriasis and other skin ailments.Ho spent a year and about $40,000 getting the pedicures up and running, with a few hiccups along the way.State regulations make no provision for regulating fish pedicures. But the county health department — which does regulate pools — required the salon to switch from a shallow, tiled communal pool that served as many as eight people to individual tanks in which the water is changed for each customer.The communal pool also presented its own problem: At times the fish would flock to the feet of an individual with a surplus of dead skin, leaving others with a dearth of fish."It would sometimes be embarrassing for them but it was also really hilarious," Ho said.