Please read this and advise your friends and family! You may save others’ lives!

Incident One: A little boy died because surgeons found ants in his brain! Apparently this boy fell asleep with some sweets in his mouth or with some sweet stuff beside him.

Ants soon got to him and some ants in fact crawled into his ear which somehow managed to go to his brain. When he woke up, he did not realize that ants had gone to his head…

After that, he constantly complained about itchiness around his face. His mother brought him to a doctor, but the doctor could not figure out what was wrong with him. He took an X-ray of the boy and to his horror; he found a group of live ants in his skull. Since the ants were still alive, the doctor could not operate on him because the ants were constantly moving around. The boy finally died. So please be careful when leaving food stuff near your bed or when eating in bed. This might attract ants. Most importantly,

Incident Two: Another similar incident happened in a hospital in Taiwan. This man was warded in the hospital and was constantly warned by the nurses not to leave food stuff by his bedside because there were ants about. He did not heed their advice. Ants finally got to him.. His family members said that the man constantly complained about headaches.. He died and a postmortem or autopsy was done on him. Doctors found a group of live ants in his head. Apparently, the ants had been eating bits of his brain. So friends, better be safe than sorry. Never leave food stuff beside your bed you when you go to sleep.

Please forward this to your friends and relatives.

Commentary:
According to this horrific little story, there have been cases in which ants have made their way into human skulls by way of the ears and subsequently lived inside the brains, eating brain tissue, until their victims finally succumbed. The message warns that people should never eat in bed or leave sweets or other foods near their beds at night, lest ants be attracted and then use their ears as a passageway to their brains. 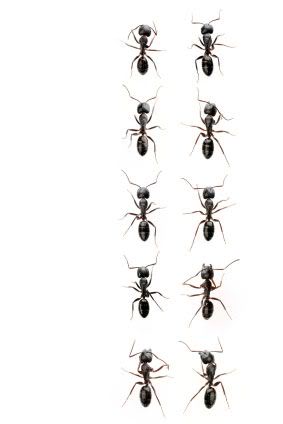 However, the story is no more than a more recent incarnation of an oldurban legend that goes back centuries. Ants, or other insects, cannot make their way into a living human brain via the ears, nor would it be possible for them to actually stay alive in the brain even if they could. The aural system and the brain itself has a number of defence mechanisms and physical properties that make such an invasion impossible. Glands in the outer ear produce ear wax that, along with tiny hairs, helps to provide protection against insects and other foreign bodies. Entrance to the middle ear is protecting by the eardrum, which consists of three thin layers of living tissue. And, even if ants could make their way through the outer and middle ears, their journey would then be severely hampered by three fluid-filled chambers that make up the cochlea, in the inner ear. Thus, to even get to the threshold of the brain itself the ants would need to battle through the outer ear, chew through the ear drum and then somehow enter the cochlea and actually swim through its fluid-filled chambers.

Moreover, in the vastly unlikely event that the ants actually made it alive and well all the way through the inner ear, and then through the auditory nerve to the brain, they would then be confronted by the brain’s own protection systems. At some point, the ants would have to make their way through the dura mater, a tough membrane that is the first of three membranes (meninges) that cover the brain and spinal cord. And the brain is further protected by a liquid called the cerebrospinal fluid. In short, there is no way that an ant could survive inside a human brain.

Thus it is totally absurd to suggest that ants could not only make their way right into a living brain, but actually stay alive and hungry once ensconced therein. This simply cannot and will not happen.

Another absurd aspect of the warning message is that it suggests that people could actually sleep through the brain invasion described. Insects can and do find their way into human ears, usually by accident. Normally, no long term damage is caused by such incursions. However, as anyone who has had an insect in their ear can testify, such an event is extremely unpleasant. The feeling of the insect moving around makes one’s flesh crawl, and the sound generated by the tiny creatures seems very loud indeed. It is therefore very doubtful that even the deepest sleeper would not wake up and subsequently deal with the invasion if ants entered his or her ear.

Given that ants are one of the most common kinds of insect, if such invasions were possible, there would be many such cases reported all around the world. The potential hazard would be well known to the medical profession and widely reported in medical literature and the media. But, even after extensive research, I could not find even one credible documented case of such a brain infestation.

It is important that people receive reliable and factual health related information, so forwarding on errant nonsense such as this serves no good purpose. If you receive this bogus warning message, do not forward it to others and please inform the sender that the information it contains is untrue.