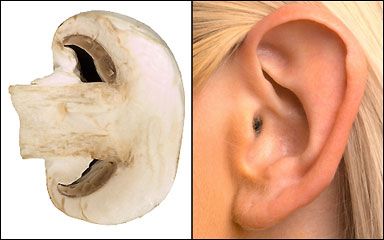 Slice a mushroom in half and it resembles the shape of the human ear.
And guess what? Adding it to your cooking could actually improve your hearing.
That?s because mushrooms are one of the few foods in our diet that contain vitamin D.
This particular vitamin is important for healthy bones, even the tiny ones in the ear that transmit sound to the brain.

Cheer yourself up and put a smile on your face by eating a banana.
The popular fruit contains a protein called tryptophan.
Once it has been digested, tryptophan then gets converted in a chemical neurotransmitter called serotonin.
This is one of the most important mood-regulating chemicals in the brain and most anti-depressant drugs work by adjusting levels of serotonin production.
Higher levels are associated with better moods. 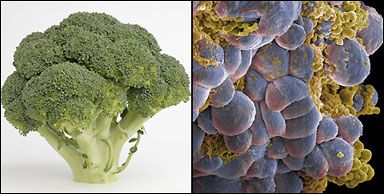 Close-up, the tiny green tips on a broccoli head look like hundreds of cancer cells.
Now scientists know this disease-busting veg can play a crucial role in preventing the disease.
Last year, a team of researchers at the US National Cancer Institute found just a weekly serving of broccoli was enough to reduce the risk of prostate cancer by 45 per cent.
In Britain , prostate cancer kills one man every hour. 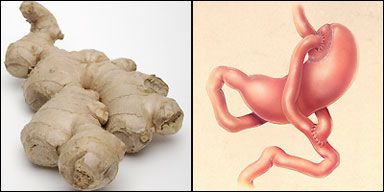 Root ginger, commonly sold in supermarkets, often looks just like the stomach.
So it?s interesting that one of its biggest benefits is aiding digestion.
The Chinese have been using it for over 2,000 years to calm the stomach and cure nausea, while it is also a popular remedy for motion sickness.
But the benefits could go much further.
Tests on mice at the University of Minnesota found injecting the chemical that gives ginger its flavour slowed down the growth rate of bowel tumours.

A nice ?holey? cheese, like Emmenthal, is not just good for your bones, it even resembles their internal structure.
And like most cheeses, it is a rich source of calcium, a vital ingredient for strong bones and reducing the risk of osteoporosis later in life.
Together with another mineral called phosphate, it provides the main strength in bones but also helps to ?power? muscles.
Getting enough calcium in the diet during childhood is crucial for strong bones.
A study at Columbia University in New York showed teens who increased calcium intake from 800mg a day to 1200mg ? equal to an extra two slices of cheddar – boosted their bone density by six per cent. 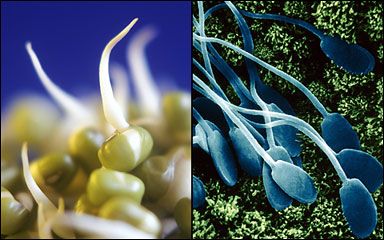 The stir-fry favourite bears an uncanny resemblance to the images we see of ?swimming? sperm trying to fertilise an egg. And research from the US suggests they could play an important part in boosting male fertility.
A study at the Cleveland Clinic in Ohio showed that to make healthy sperm in large quantities, the body needs a good supply of vitamin C, a powerful antioxidant that protects cells against damage by harmful molecules called free radicals.
Just half a cup of bean sprouts provides 16 per cent of the recommended daily allowance of vitamin C for a man.
It?s not just dad but baby too who could benefit.
Bean sprouts are packed with folate, a vitamin that prevents neural tube defects, where the baby is born with a damaged brain or spine. 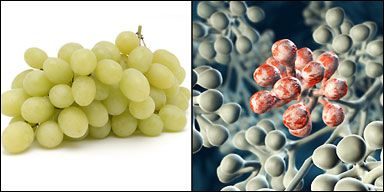 OUR lungs are made up of branches of ever-smaller airways that finish up with tiny bunches of tissue called alveoli.
These structures, which resemble bunches of grapes, allow oxygen to pass from the lungs to the blood stream.
One reason that very premature babies struggle to survive is that these alveoli do not begin to form until week 23 or 24 of pregnancy.
A diet high in fresh fruit, such as grapes, has been shown to reduce the risk of lung cancer and emphysema.
Grape seeds also contain a chemical called proanthocyanidin, which appears to reduce the severity of asthma triggered by allergy. 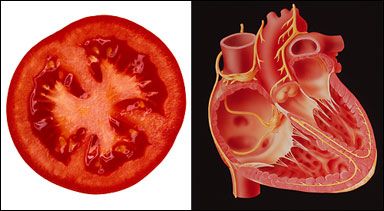 A TOMATO is red and usually has four chambers, just like our heart.
Tomatoes are also a great source of lycopene, a plant chemical that reduces the risk of heart disease and several cancers.
The Women?s Health Study ? an American research programme which tracks the health of 40,000 women ? found women with the highest blood levels of lycopene had 30 per cent less heart disease than women who had very little lycopene.
Lab experiments have also shown that lycopene helps counter the effect of unhealthy LDL cholesterol.
One Canadian study, published in the journal Experimental Biology and Medicine, said there was ?convincing evidence? that lycopene prevented coronary heart disease.

THE gnarled folds of a walnut mimic the appearance of a human brain – and provide a clue to the benefits.
Walnuts are the only nuts which contain significant amounts of omega-3 fatty acids.
They may also help head off dementia. An American study found that walnut extract broke down the protein-based plaques associated with Alzheimer?s disease.
Researchers at Tufts University in Boston found walnuts reversed some signs of brain ageing in rats.