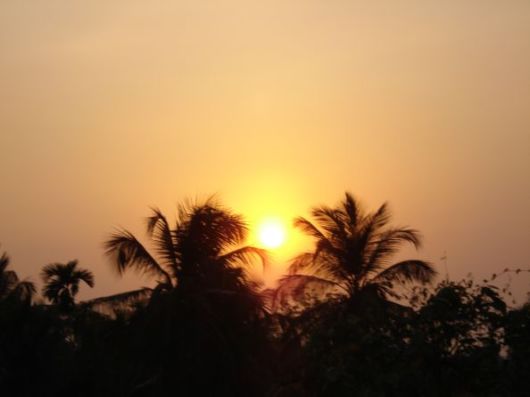 2. And the Sun is mostly hydrogen and helium.
If you could take apart the Sun and pile up its different elements, you’d find that 74% of its mass comes from hydrogen. with 24% helium. The remaining 2% is includes trace amounts of iron, nickel, oxygen, and all the other elements we have in the Solar System. In other words, the Solar System is mostly made of hydrogen.

3. The Sun is pretty bright.
We know of some amazingly large and bright stars, like Eta Carina and Betelgeuse. But they’re incredibly far away. Our own Sun is a relatively bright star. If you could take the 50 closest stars within 17 light-years of the Earth, the Sun would be the 4th brightest star in absolute terms. Not bad at all.

4. The Sun is huge, but tiny.
With a diameter of 109 times the size the Earth, the Sun makes a really big sphere. You could fit 1.3 million Earths inside the Sun. Or you could flatten out 11,990 Earths to cover the surface of the Sun. That’s big, but there are some much bigger stars out there. For example, the biggest star that we know of would almost reach Saturn if it were placed inside the Solar System.

5. The Sun is middle aged.
Astronomers think that the Sun (and the planets) formed from the solar nebula about 4.59 billion years ago. The Sun is in the main sequence stage right now, slowly using up its hydrogen fuel. But at some point, in about 5 billion years from now, the Sun will enter the red giant phase, where it swells up to consume the inner planets ? including Earth (probably). It will slough off its outer layers, and then shrink back down to a relatively tiny white dwarf.

6. The Sun has layers.
The Sun looks like a burning ball of fire, but it actually has an internal structure. The visible surface we can see is called the photosphere, and heats up to a temperature of about 6,000 degrees Kelvin. Beneath that is the convective zone, where heat moves slowly from the inner Sun to the surface, and cooled material falls back down in columns. This region starts at 70% of the radius of the Sun. Beneath the convection zone is the radiative zone. In this zone, heat can only travel through radiation. The core of the Sun extends from the center of the Sun to a distance of 0.2 solar radii. This is where temperatures reach 13.6 million degrees Kelvin, and molecules of hydrogen are fused into helium.

7. The Sun is heating up, and will kill all life on Earth.
It feels like the Sun has been around forever, unchanging, but that’s not true. The Sun is actually slowly heating up. It’s becoming 10% more luminous every billion years. In fact, within just a billion years, the heat from the Sun will be so intense that liquid water won’t exist on the surface of the Earth. Life on Earth as we know it will be gone forever. Bacteria might still live on underground, but the surface of the planet will be scorched and uninhabited. It’ll take another 7 billion years for the Sun to reach its red giant phase before it actually expands to the point that it engulfs the Earth and destroys the entire planet.

10. There are spacecraft observing the Sun right now.
The most famous spacecraft sent to observe the Sun is the Solar and Heliospheric Observatory, built by NASA and ESA, and launched in December, 1995. SOHO has been continuously observing the Sun since then, and sent back countless images. A more recent mission is NASA’s STEREO spacecraft. This was actually two spacecraft, launched in October 2006. These twin spacecraft were designed to watch the same activity on the Sun from two different vantage points, to give a 3-D perspective of the Sun’s activity, and allow astronomers to better predict space weather.