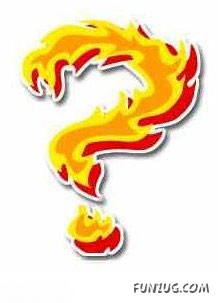 ? Stewardesses is the longest word typed with only the left hand.

? The ant always falls over on its right side when intoxicated.

? The electric chair was invented by a dentist.

? The human heart creates enough pressure when it pumps out to the body to Squirt blood 30 feet.

? Wearing headphones for just an hour will increase the bacteria in your ear By 700 times.

? Owls have eyeballs that are tubular in shape, because of this, they cannot move their eyes.

? A bird requires more food in proportion to its size than a baby or a cat.

? The mouse is the most common mammal in the US.

? A newborn kangaroo is about 1 inch in length.

? The Canary Islands were not named for a bird called a canary. They were named after a breed of large dogs. The Latin name was Canariae insulae – "Island of Dogs."

? A polecat is not a cat. It is a nocturnal European weasel.

? The animal responsible for the most human deaths world-wide is the mosquito.

? The biggest pig in recorded history was Big Boy of Black Mountain, North Carolina, who was weighed at 1,904 pounds in 1939.

? Cats respond most readily to names that end in an "ee" sound.

? Pigs, walruses and light-colored horses can be sunburned.

? Snakes are immune to their own poison.

? An iguana can stay under water for 28 minutes.

? Cats have more than one hundred vocal sounds, while dogs only have about ten.

? The biggest member of the cat family is the male lion, which weighs 528 pounds (240 kilograms).

? Rats multiply so quickly that in 18 months, two rats could have over a million descendants.

? Each day in the US, animal shelters are forced to destroy 30,000 dogs and cats.

? A shrimp’s heart is in their head.

? A pregnant goldfish is called a twit.

? A cockroach will live nine days without its head, before it starves to death.

? A woodpecker can peck twenty times a second.

? It may take longer than two days for a chick to break out of its shell.

? Dragonflies are one of the fastest insects, flying 50 to 60 mph.

? Despite man’s fear and hatred of the wolf, it has not ever been proved that a non-rabid wolf ever attacked a human.

? There are more than 100 million dogs and cats in the United States.

? Americans spend more than 5.4 billion dollars on their pets each year.

? The largest cockroach on record is one measured at 3.81 inches in length.

? It is estimated that a single toad may catch and eat as many as 10,000 insects in the course of a summer.

? Amphibians eyes come in a variety shapes and sizes. Some even have square or heart-shaped pupils.

? It would require an average of 18 hummingbirds to weigh in at 1 ounce.

? Dogs that do not tolerate small children well are the St. Bernard, the Old English sheep dog, the Alaskan malamute, the bull terrier, and the toy poodle.

? Moles are able to tunnel through 300 feet of earth in a day.

? Howler monkeys are the noisiest land animals. Their calls can be heard over 2 miles away.

? A quarter of the horses in the US died of a vast virus epidemic in 1872.

? The fastest bird is the Spine-tailed swift, clocked at speeds of up to 220 miles per hour.

. There is no single cat called the panther. The name is commonly applied to the leopard, but it is also used to refer to the puma and the jaguar. A black panther is really a black leopard. A capon is a castrated rooster.

? The world’s largest rodent is the Capybara. An Amazon water hog that looks like a guinea pig, it can weigh more than 100 pounds.

? The poison-arrow frog has enough poison to kill about 2,200 people.

? The hummingbird, the loon, the swift, the kingfisher, and the grebe are all birds that cannot walk.

? A chameleon’s tongue is twice the length of its body.

? Worker ants may live seven years and the queen may live as long as 15 years.

? Cheetahs make a chirping sound that is much like a bird’s chirp or a dog’s yelp. The sound is so an intense, it can be heard a mile away.

? The underside of a horse’s hoof is called a frog. The frog peels off several times a year with new growth.

? The bloodhound is the only animal whose evidence is admissible in an American court. 98% of brown bears in the United States are in Alaska.

? Before air conditioning was invented, white cotton slipcovers were put on furniture to keep the air cool.

? The Barbie doll has more than 80 careers.

? 99% of pumpkins that are sold for decoration.

? Every 30 seconds a house fire doubles in size.

? The month of December is the most popular month for weddings in the Philippines.

? A one ounce milk chocolate bar has 6 mg of caffeine.

? Carbon monoxide can kill a person in less than 15 minutes.

? The largest ever hailstone weighed over 1kg and fell in Bangladesh in 1986.

? In Belgium, there is a museum that is just for strawberries.

? The sense of smell of an ant is just as good as a dog’s.

? Popped popcorn should be stored in the freezer or refrigerator as this way it can stay crunchy for up to three weeks.

? The most common name in the world is Mohammed.

? The name of all the continents end with the same letter that they start with.

? The strongest muscle in the body is the tongue.

? TYPEWRITER is the longest word that can be made using the letters only on one row ! of the keyboard.

? Women blink nearly twice as much as men!!

? You can’t kill yourself by holding your breath.

? It is impossible to lick your elbow.

? It is physically impossible for pigs to look up into the sky.

? The "sixth sick sheik’s sixth sheep’s sick" is said to be the toughest

? tongue twister in the English language.

? If you sneeze too hard, you can fracture a rib. If you try to suppress a sneeze, you can rupture a blood vessel in your head or neck and die.

? Each king in a deck of playing cards represents great king from history.

? What do bullet proof vests, fire escapes, windshield wipers and laser printers all have in common? Ans. – All invented by women.

. Question – This is the only food that doesn’t spoil. What is this? Ans. – HoneY.

. A crocodile cannot stick its tongue out.

. A snail can sleep for three years.

. All polar bears are left handed.

? American Airlines saved $40,000 in 1987 by eliminating one olive from each salad served in first-class.

? Butterflies taste with their feet.

? Elephants are the only animals that can’t jump.

? In the last 4000 years, no new animals have been domesticated.

? On average, people fear spiders more than they do death.

? The cigarette lighter was invented before the match.

? Tapeworms range in size from about 0.04 inch to more than 50 feet in length.

? German Shepherds bite humans more than any other breed of dog.