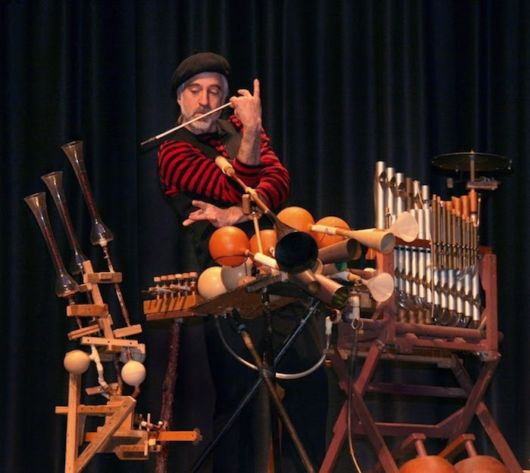 VICE
Known as the Dr. Seuss of music, Leonard Solomon is the proud creator of the Majestic Bellowphone. While it looks like something that the Grinch might find underneath Whoville?s Christmas tree, don?t be fooled by its odd appearance. Handcrafted from the likes of train whistles, coat hangers, toasters, bike horns and bits of brass, the Bellowphone can hold a rather decent tune and has tackled everything from Mozart to Brahms.
It doesn?t stop there for the cabinetmaker-turned-musician. Solomon has been building his crowning glory, the Oomphalapompatronium, for the last 15 years as a ?sweeter? sister to the Bellowphone. Solomon?s symphony of strange sounds has been heard around the world and the mad musician shows no signs of slowing down. As if that wasn?t exciting enough, he also juggles occasionally while playing. 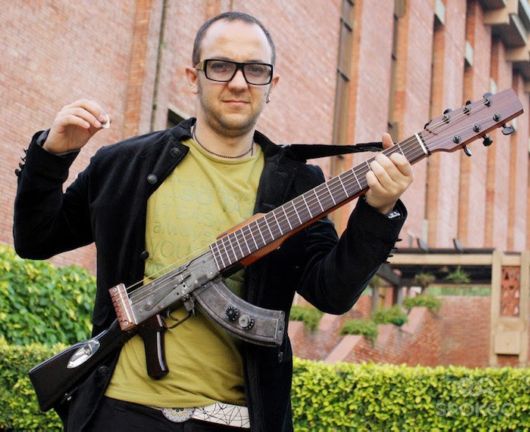 Spokeo
?Make music, not war? is the brainchild of César Lopez, an inventor who has dedicated his life to transforming instruments of death into something all together more beautiful?and life restoring. The AK-47 guitar, named the ?Escopetarra?, takes its mantle from the Spanish words for shotgun and guitar. Lopez invented the instrument in 2003 as a poignant response to the violence that has long plagued his hometown of Bogotá, Colombia. 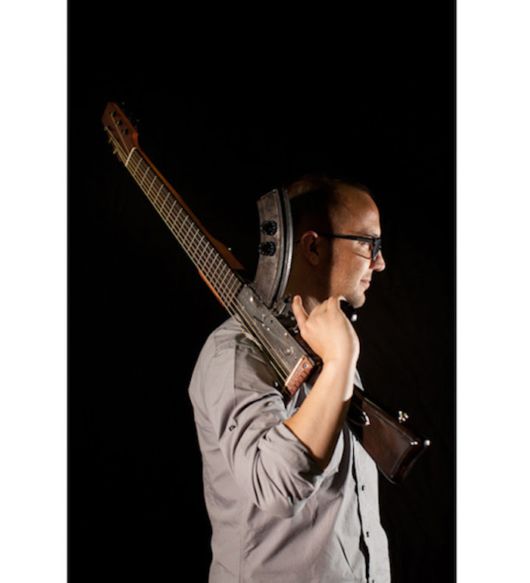 Andrew Burton Photography
The Escopetarra is designed to challenge the destructive capabilities of weapons with the generative powers of art, with the Colomobian peace activist saying to his peers that ?if the weapon, which was designed to kill, can be changed, then why can?t humans change too?? The guitar?s symbolic beauty has been recognized by high profile artists from across the world, and was even commissioned for Paul McCartney among others. One of the twelve repurposed AK-47?s can now be seen on display at the United Nations Headquarters.
Musical Instruments: Holophonor 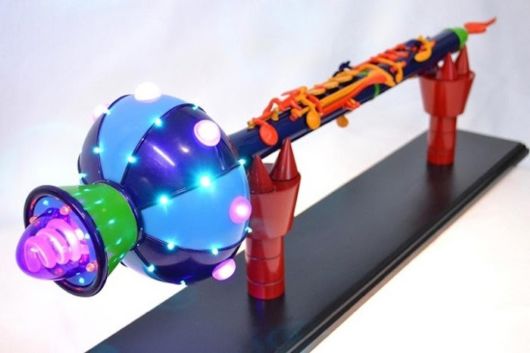 Comics Alliance
What began as animated musical madness for the small screen quickly turned into a convincing ?Futurama? real life replica. The Holophonor, a space age clarinet that projects holograms when played, became the latest project of movie buff Volpin Props when a client asked for a copy of Futurama?s favorite instrument. 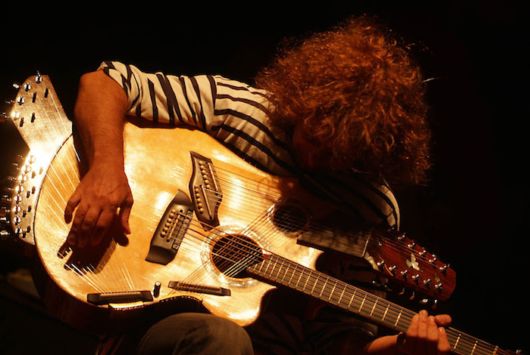 This Fab Trek
Another ?world?s first?, this particular guitar convenes Pablo Picasso?s cubist perspective with the music world. Luthier Linda Manzer created the Pikasso Guitar after jazz guitarist Pat Metheny challenged her to design an instrument with ?as many strings as possible?. The result is an astounding 42-stringed work of genius with four twisting necks that wouldn?t be out of place in a modern art museum. 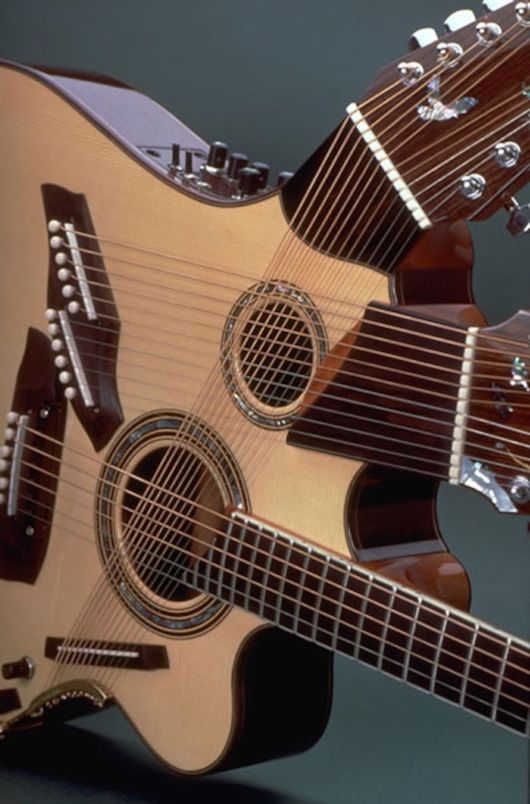 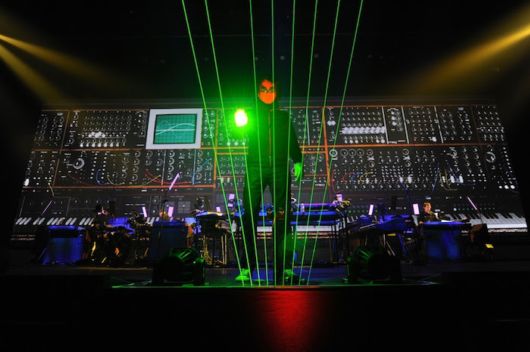 WordPress
When thinking of harps, images of delicately carved golden instruments being plucked by rosy-cheeked cherubs?not lasers?often come to mind. Meet the laser harp. Also known as the ?Infinite Beam?, the laser harp is created by splitting a single laser into several parallel beams which are then connected to a synthesizer. 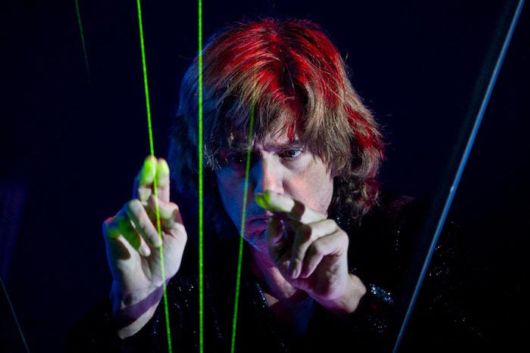 Greg Rybczynski
The laser harp has been making a comeback after it rocketed to fame in the 80s with techno artist Jean Michel Jarre. Some skeptics have tried to debunk the laser harp as a hoax, but a mystery malfunction during one of Jarre?s concerts quickly put that idea to rest. Aside from providing a spectacular light show, this harp iteration has a made a pretty successful transition to the electronica genre, and the Michael Jackson style gloves that protect the user?s hands from being fried by the beams have become just as iconic.
Musical Instruments: Singing Ringing Tree 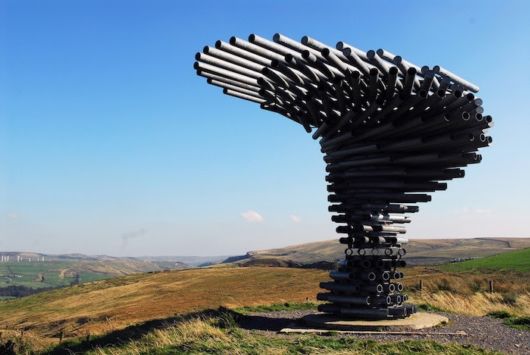 Tonkin Liu
The last thing you?d expect to hear when wandering through the English countryside is a musical tree howling to the wind. That is, unless you?re traipsing about Lancashire?s Pennine Hills. Wind powered and made from three meter tall galvanized steel pipes, the Singing Ringing Tree sculpture was designed in 2006 as part of an art regeneration project 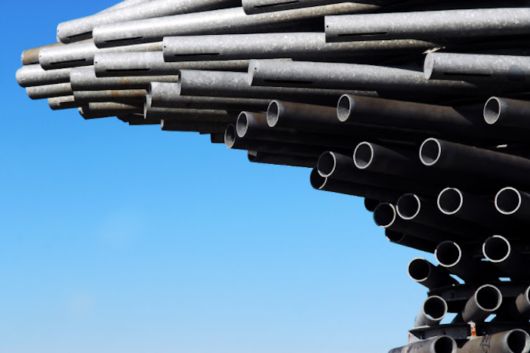 Tonkin Liu
The tree?s pipes were structured and tuned so that when wind whistles through them, the tree sings across a range of several octaves. Aside from winning an architectural excellence prize, the tree is one of the world?s most mind boggling?and creepy sounding?musical instruments.
Musical Instruments: Vegetable Orchestra 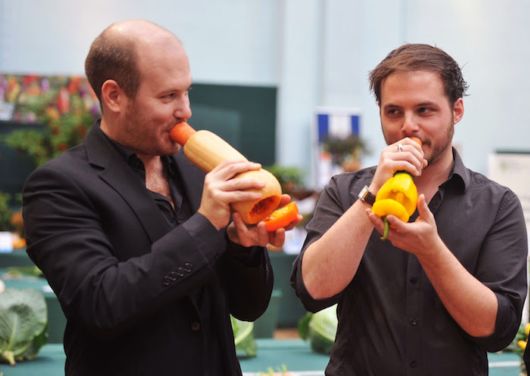 Blogspot
Grocery shopping can be a bit of a chore, but for a group of eccentric entertainers in Vienna, it?s an excuse to stock up on some new musical instruments. The Vegetable Orchestra works exactly as it sounds: they make instruments from whatever vegetables they can get their hands on, and after they?ve finished playing them, they turn them into soup for the audience. 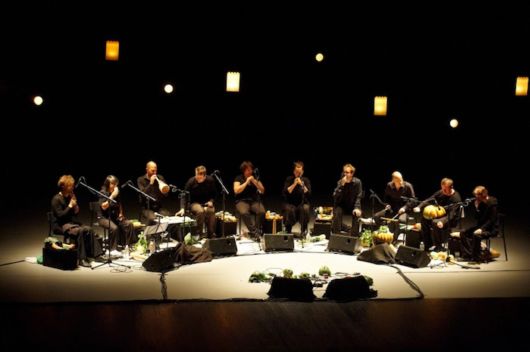 Festival Musica
Harnessing one of the most unique sounds in the universe, the groovy grocers have no musical boundaries and have played on everything from parsnip flutes to pumpkin bongos. In fact, so popular are their creative concerts that they?ve played in concert halls across the world from the heights of Hong Kong to the halls of Huddersfield. Just don?t expect an encore after the soup?s been served.