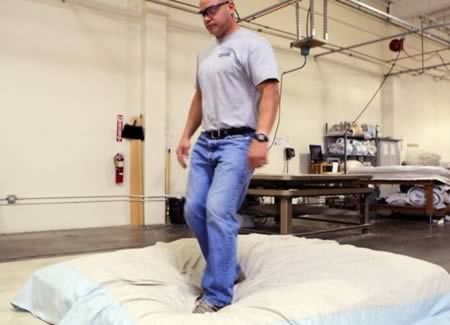 The man who gets paid to jump on mattresses says you can stop laughing now. There is nothing funny about jumping on mattresses day after day. Mattress after mattress. People refuse to understand. ?It’s work,’ said professional mattress jumper Reuben Reynoso. ?It’s not for everybody. There is a right way and a wrong way to do it.’ Reynoso, who jumps on three mattresses a day, does it the right way. He doesn’t try for height. He doesn’t go ?boing’ or turn a somersault. His 10 toes are not little piggies going to market. They are trained members of the team. It’s not a trampoline, for goodness sakes, it’s a $2,750 mattress. ?This is not a game,’ said Reynoso, bouncing up and down. ?Not to me’. 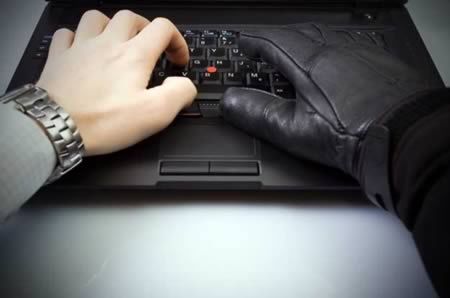 Can you be a hacker and also be a good person? As a matter of fact you can, and that’s a desk job that pays especially well: an ethical hacker earns more than $170,000 per year ($92,000 on average), according to PayScale.com. Ethical hackers help companies find glitches and weaknesses in their computer systems. 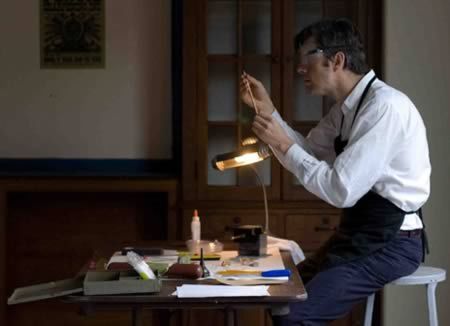 You could sharpen your own pencils, but who would want to go to all the effort? Send them to David Rees of Artisanal Pencil Sharpening, and he’ll whittle them to perfection and return them to you with the shavings and a certificate of authenticity:

This is how Rees’ artisanal pencil sharpening works: You might send him your favorite pencil, but Rees more often selects and sharpens a classic No. 2 pencil for his clients "carefully and lovingly," he promises. He slides the finished pencil’s very sharp tip into a specially-sized segment of plastic tubing, then puts the whole pencil in a larger, firmer tube that looks like it belongs in a science experiment. Throw it at a wall, he says, and it won’t break. The cost? $15. 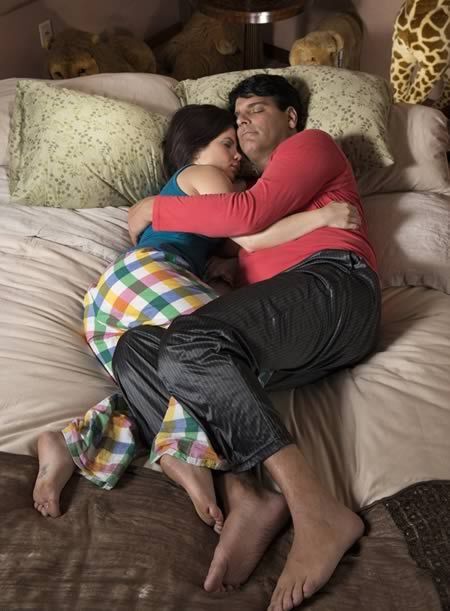 Meet Jackie Samuel. She’s a professional snuggler. According to her website thesnuggery.org, Samuel charges $60 an hour for ?private snuggling sessions? at her home in Rochester, New York. No sex, just cuddles.

?This is not about sex and I’m really straight forward about that,? said the 29-year-old. Samuel’s mission, according to her website, is to ?make the world a gentler place, one snuggle at a time.?

It also helps pay for her studies and provide for her young son. Also, clearly there are a lot of people in need of a cuddle. Samuel makes as much as $260 a day and cuddles with up to 30 men a week.

Samuel, who started her business earlier this year, has strict rules. She only snuggles in her house and clients are not allowed to touch ?any parts of her body which are covered by underwear, which she wears under her pyjamas.?

So, who pays for cuddles? Samuel said pensioners, war veterans and people ?between relationships? are among her clients. 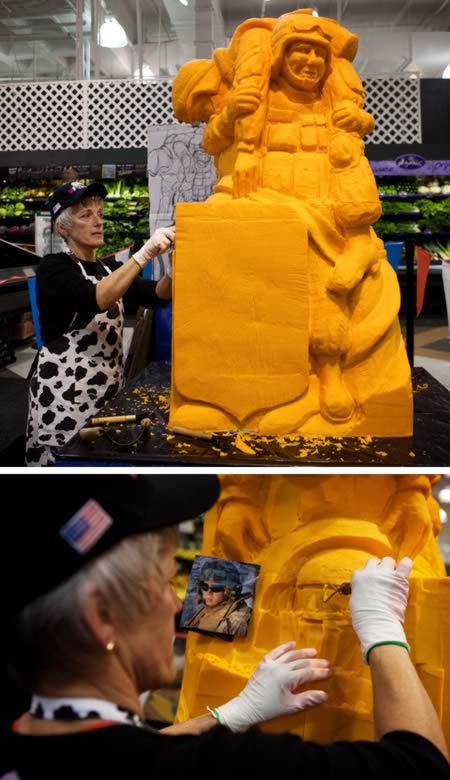 Sarah Kaufmann is one of only three people in the United States who make their living carving cheese. That’s right, the "Cheese Lady" is a professional cheese sculptor.

Why cheese? Well, Michelangelo used marble. Sarah Kaufmann uses cheese. What drew this sculptor to her material? A strong affinity for tangy cheddar or the fact that she hails from the proudest cheese state in the nation, Wisconsin? No, as Kaufmann says, "The cheese found me." What’s more, she says, "It’s much more delightful than working with wood or stone. You can snack while you work." 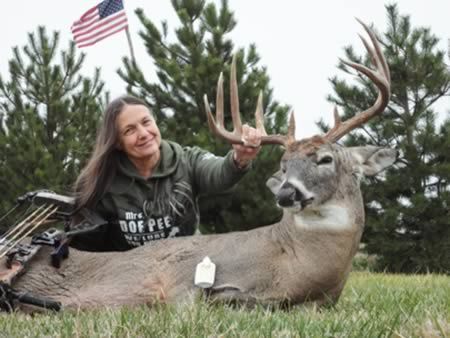 Hunters often use deer urine to attract their prey. Specifically, they use the come-hither-smelling urine of does in heat. So where do hunters get this urine? From professional urine farmers like Judi Collora.

The one question they get asked most often, Mrs. Collora says, is how they know the best time to harvest estrus urine. ?Hey, it ain’t rocket science,? she laughs. ?You put a buck in there. When he starts riding the doe, and she lets him, they’re in heat. When they’re done, you collect their urine. That’s our whole business model.? 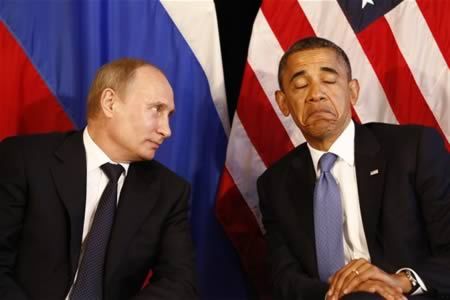 You might have known that the ancient Egyptians and the Romans employed them, but were you aware that poison tasting is still a potential career option today? Vladimir Putin is reported to engage the services of ?food tasters’ who travel with him and, um, taste his food. He has every dish inspected by a medically-qualified professional sampler, who makes sure that it is completely safe to eat.

George Bush apparently also had two former FBI agents taste every one of his dishes during a trip to London. 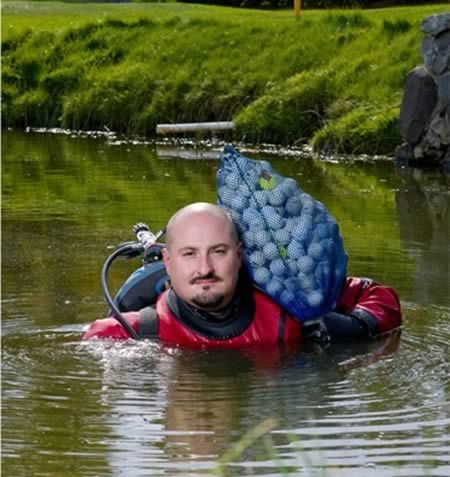 What if you could spend all of your workdayson golf courses?diving? When golfers hit a ball into a water trap, most of them look at the offending obstacle, say something nasty and settle in to launch another little white ball. Ok, so the water’s neither clear like the Caribbean nor colorful like a coral wall off the Great Barrier Reef. It’s a cold, nasty, dirty job, but someone’s got to do it. For golf ball divers, a bad day of golf is a good day of work. Golf ball divers dive about four days a week and on an average day collect approximately 4,000 golf balls.

Also, golf ball divers have made up to $100,000 annually. Now I got your attention, right? 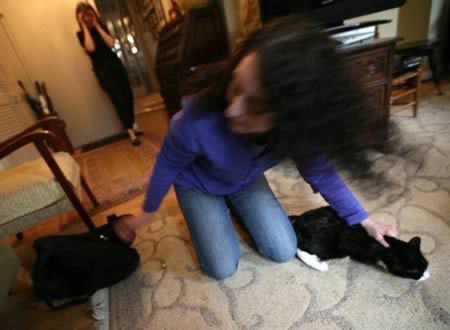 Her service costs $80, but the skills of a professional cat catcher — probably the only one in New York City — are worth it. Jordana Serebrenik has a talent for safely capturing household cats. She’s good enough at it that people hire her to come into their homes and get their unwilling felines into pet carriers. 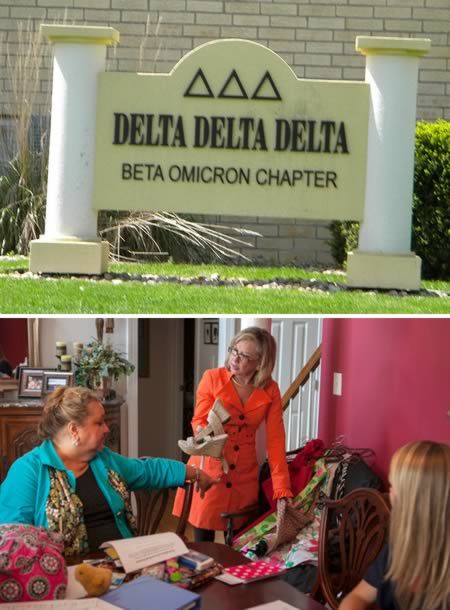 If you want to succeed in life, then you’d better get into the right sorority. Make it your primary focus for the first few months of college, because that’s when you have to impress girls three years older than yourself. Their opinions of your body, intellect, personality and values matter. Make the best impression with the help of professionals who coach young ladies through the process of rushing a sorority.

Naming themselves the Rushbiddies, they opened shop in 2009 after hearing about the rush misfortunes of their daughters’ friends. About 50 mothers and their ?chicks,? as the Biddies affectionately call them, attended one of their two-day workshops in April ($100 a couple), complete with mock rush party, wardrobe hints and paperwork prep.

There is a mound of it. The smart rushee, the Biddies advise, will have a résumé stressing community service, leadership, academics and teamwork, letters of recommendation from alumni of each chapter, preferably on the campus in question, and reference letters.

With the help of Ms. Foster and Ms. Grant, who wears a pink feather boa during workshops, Mrs. King asked alumni of about 10 chapters, several from UVA, to write her daughter’s recommendations. To guide their plaudits, she sent them packets with a professional photograph, transcript and résumé. To thank them, she dropped off a bottle of rosé in their mailboxes.