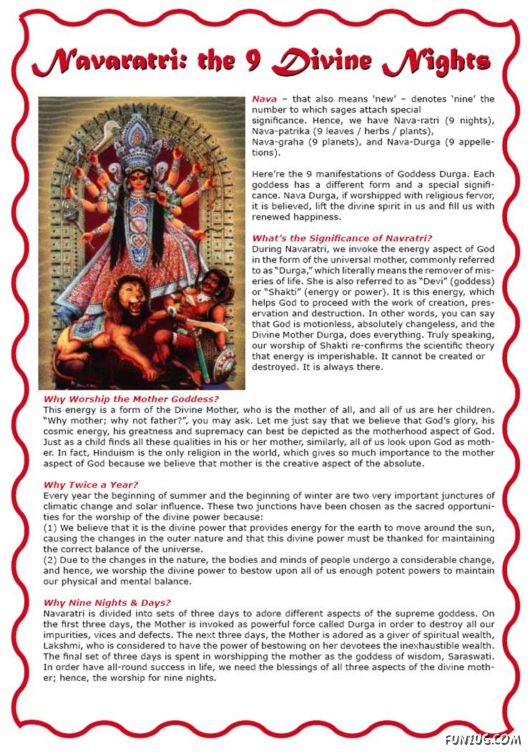 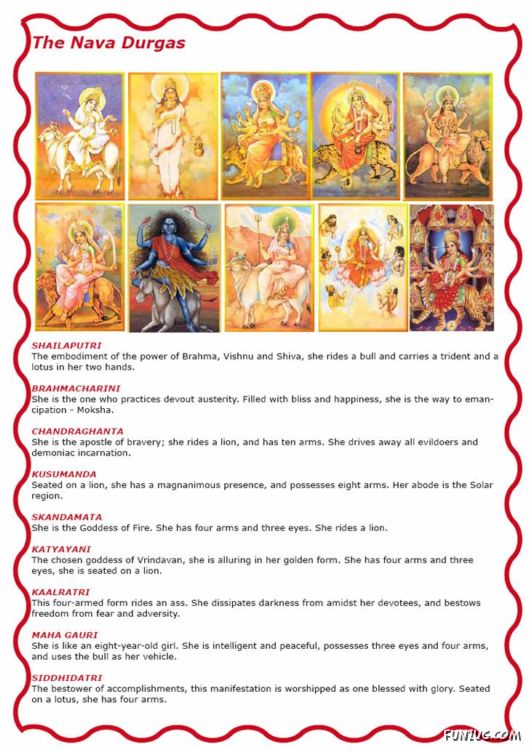 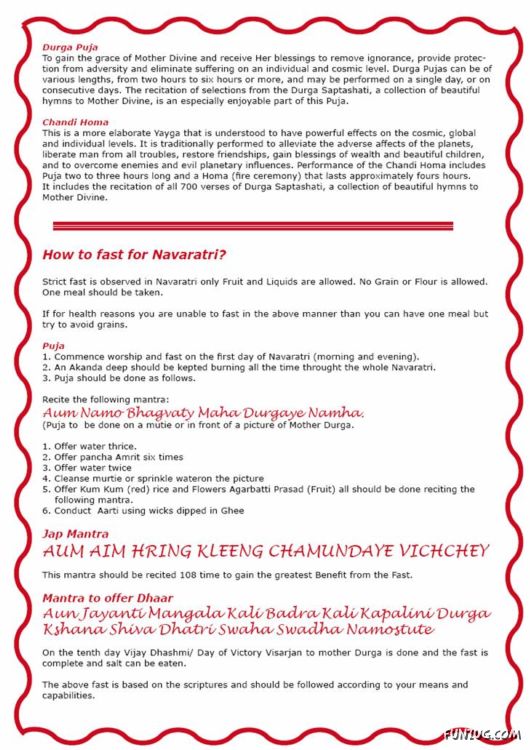 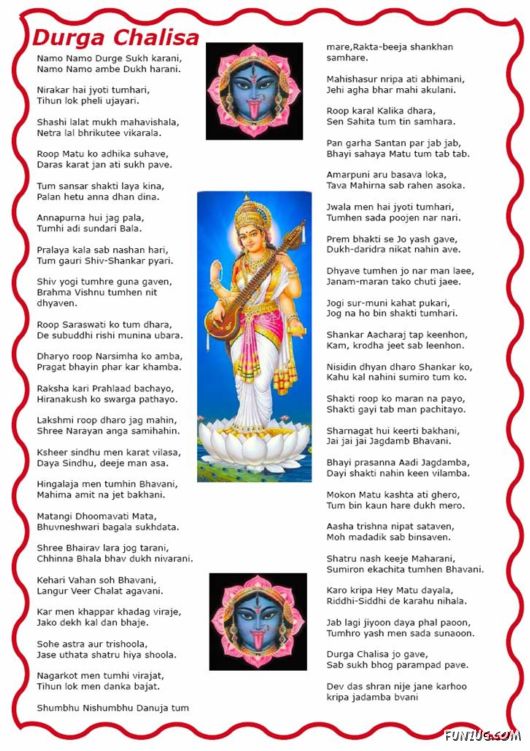 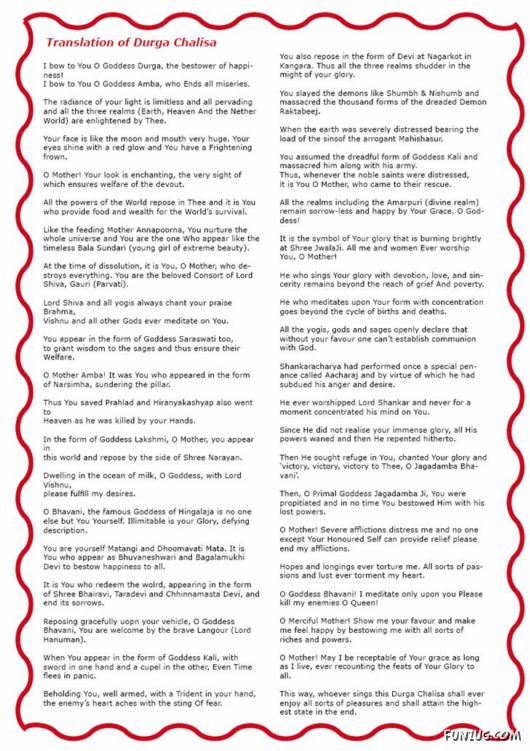 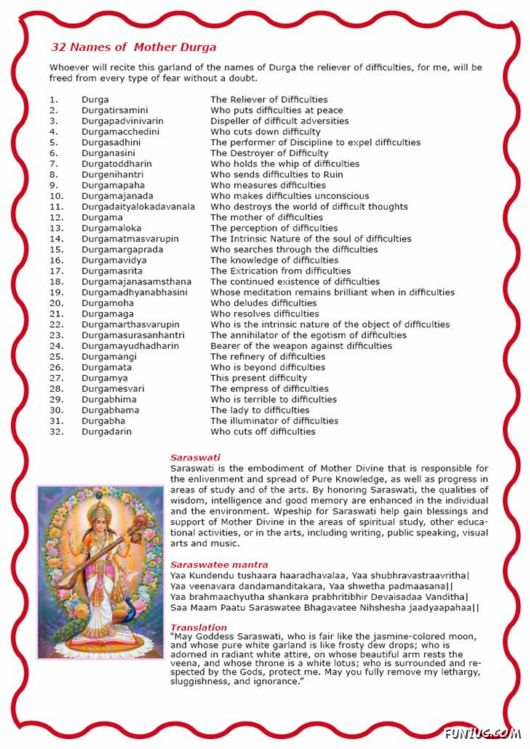 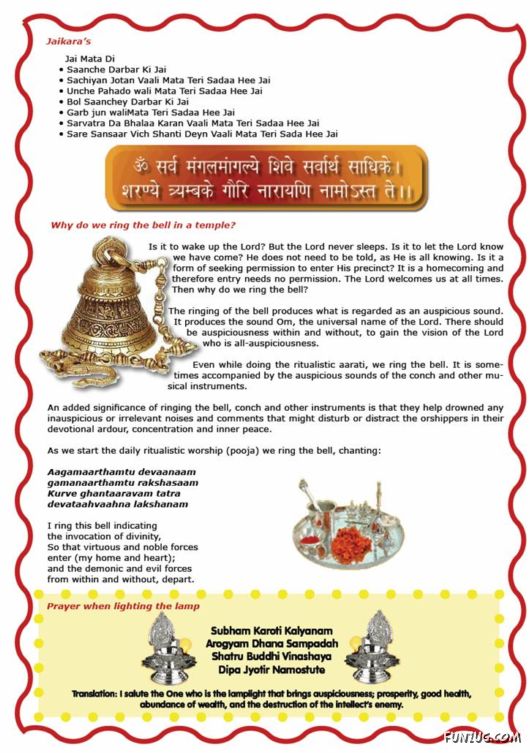 Origin of Durga – The Mythology

Devi is the great goddess of the Hindus,the consort of Shiva and she is worshiped in various forms corresponding to her two aspects: benevolence and fierceness. She is Uma, "light"; Gauri, "yellow or brilliant"; Parvati, "the mountaineer"; and Jagatmata, "the-mother-of-the-world" in her milder guise. The terrible emanations are Durga "the inaccessible"; Kali, "the black"; Chandi, "the fierce"; and Bhairavi, "the terrible."

Descent of the Goddess

Durga, a beautiful warrior seated upon a tiger, was the first appearance of the great goddess. The circumstance of her miraculous arrival was the tyranny of the monster-demon Mahishasur, who through terrific austerities had acquired invincible strength. The gods were afraid of this water-buffalo bull because neither Vishnu nor Shiva could prevail against him. It seemed that the joint energy of Shakti was only capable of vanquishing Mahisha, and so it was the eighteen-armed Durga who went out to do battle.

She went to battle on her ferocious mount lion, armed with the weapons given to her by the other Gods. Durga is one of the angry and aggressive aspects of the goddess Shakti, whose role in Hindu mythology was to fight and conquer demons and also personify the Sakti or female aspect of any male deity. In the battle, she fought and killed the evil Mahishasura and restored heaven to the Gods. Since then the goddess is invoked for protection from the powers of evil. Durga Puja is observed in her honor, to celebrate her victory over evil.

She has been worshiped from about 400 AD, but probably earlier, to the present. Her literary references are chiefly the Ramayana and Mahabharata, epic and Puranic texts, and she is mentioned by name in Vedic literature. In general, Durga is regarded in northern India as the gentle bride epitomizing family unity while in southern India she is revered more in her warrior aspect.

The festival of Dassehra, also known as Vijayadashmi, is one of the fascinating festivals of India and is celebrated with joy and enthusiasm. According to the great Hindu scripture, the Ramayana, Lord Rama performed chandi-puja (holy prayer). This was carried out in order to invoke the blessings of Durga Maa for the killing of Ravana, the ten-headed demon king of Sri Lanka who had abducted Seeta, wife of Lord Rama.

Durga Maa divulged the secret to Rama on how he could slay the great Ravana. Hence upon vanquishing the demon Ravana, Lord Rama with Sita and younger brother Laxmana, returned victorious to his kingdom of Ayodhya on the day which is called ‘Diwali’. Revelers across northern India re-enact the legend at sundown in a performance called the Ramlila, featuring actors dressed as Rama shooting flaming arrows at effigies stuffed with firecrackers.

Dassera day is considered a most auspicious day. It is a time-honored belief that if any new venture is started on this day, it is bound to be successful. Hence, all the undertakings be it laying-in of foundation of a new building, opening of a new commercial establishment or even initiating a child into the world of learning- are started on this day. Also on this day implements of agriculture, manufacturer’s machines, the intellectuals pens, the household articles, the children’s school books are placed before the idol of Durga and worshiped.

Sati, the consort of Shiva was the daughter of Daksha Prajaapati a descendant of Bhrama. Sati had married Shiva against the wishes of her father. Daksha was sponsoring a sacrifice and attendees came from various parts of the universe. He invited all of the gods and goddesses except his son in law Shiva. Against Shiva’s wishes, Sati attended this sacrifice and was insulted by her father. Unable to bear this insult, Sati immolated herself.

Enraged at the insult and the injury, Shiva destroyed Daksha’s sacrifice, cut off Daksha’s head and when pleaded by other gods, replaced it with that of a goat and restored him to life. Still berserk with grief, he picked up the remains of Sati’s body, and danced the dance of destruction throughout the Universe. The other gods intervened to stop this dance, and the disk of Vishnu cut through the corpse of Sati, whose various parts of the body fell at several spots all through the Indian subcontinent and formed the sites of what are known as Shakti Peethas today.

Shiva was finally pacified when the last piece fell off from his shoulder. Narayana revived sati as Uma for a new life. Ever since peace was restored, Uma, with her children, Ganesh and Kartick, and with her two ‘sakhis’ – Jaya and Bijaya, comes to visit her parent’s home each year during the season of ‘Sharat’ or autumn when Durga Puja is celebrated.

Mahalaya is an auspicious occasion observed seven days before the Durga Puja, and heralds the advent of Durga, the goddess of supreme power. It’s a kind of invocation or invitation to the mother goddess to descend on earth – "Jago Tumi Jago". This is done through the chanting of mantras and singing devotional songs.

The day of Mahalaya is also the day of remembrance. On this day, people offer ‘tarpan’ in memory of their deceased forefathers. The banks of River Ganga becomes a sea of humanity. Priests are seen busy performing ‘Tarpan’ for devotees in groups. The rituals start from early down and end during the midday. Devotees and worshipers buy clothes and sweets to offer to their forefathers. ‘Tarpan’ is to be performed in empty stomach. After offering ‘tarpan’, people eat at the same place.