Pandemics are hardly a recent problem. In fact, humanity has been fighting infectious diseases for millennia, be it the plague, smallpox, cholera, the flu, or COVID-19. History shows us that ultimately, all pandemics end somehow, but it is humanity’s knowledge of their enemy and effective ways to fight it that helps tilt the odds our way. And we have learned A LOT since the times of the Black Death during the Middle Ages, though it turns out we still have a lot more to learn about the microbes that make us sick. Here is how 6 major disease outbreaks in history have ended, and what we have learned from them.

The plague had been around for millennia, and for a long time, people had no idea how to contain it, not to mention cure it. One of the most devastating plague epidemics was The Plague of Justinian. First recorded in the Byzantine Empire in 541, the plague spread like wildfire throughout Europe, North Africa, the Middle East, and Asia, claiming nearly half of the world’s population – 30-50 million victims!

Eight centuries later, in 1347, the terrible disease returned with even more force, claiming the lives of 200 million this time, becoming one of the most infamous epidemics in history – The Black Death. This time around, however, people noticed a pattern – the disease nearly always revealed itself after a specific time frame. Knowing this, city officials in Ragusa, Sicily, decided to ban entrance for ships to their port for 30 days, a law that came to be known as “trentino”.

Later, this time of isolation was further extended to 40 days, or a “quarantino”, which is where the word “quarantine” comes from. This was the first practice of quarantine in Europe, a procedure that was soon adopted by other cities. Within 4 years, the epidemic had ended, and quarantine laws contributed significantly to the end of the Black Death. 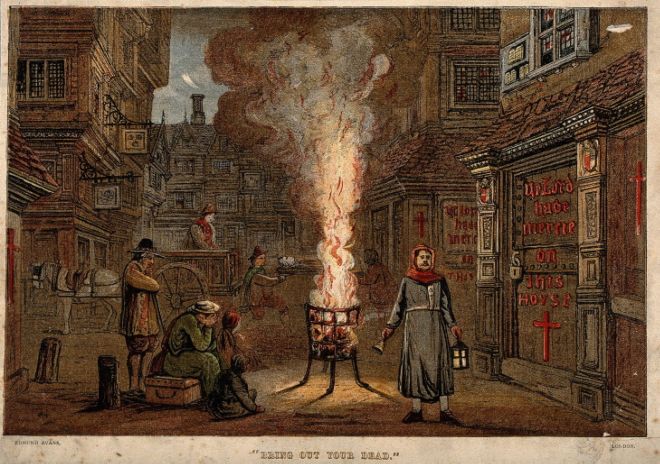 Quarantines may have limited the spread of the Black Death epidemic throughout the world, but they didn’t manage to prevent the disease from reappearing in cities around the world. In London, plague epidemics have been a recurring problem, with a total of 40 flareups of the disease being reported between 1348 and 1665.

In an attempt to limit the spread of the plague through London, the city imposed its first-ever social isolation methods at the beginning of the 16th century. The harshest laws were imposed during the last plague outbreak in London, also known as the Great Plague of London, which killed 100,000 Londoners (25% of the population) in just a year and a half.

These isolation laws were quite inhumane by modern standards and included marking the doors of sick people with red crosses, banning going out in public if you’re sick, canceling public gatherings, and hauling the sick onto so-called ‘death carts’ and burying them in mass graves. In addition, pets were wrongfully thought to spread the disease, and countless animals were killed as a result. As harsh and cruel as these laws were, they managed to halt the plague in the city. 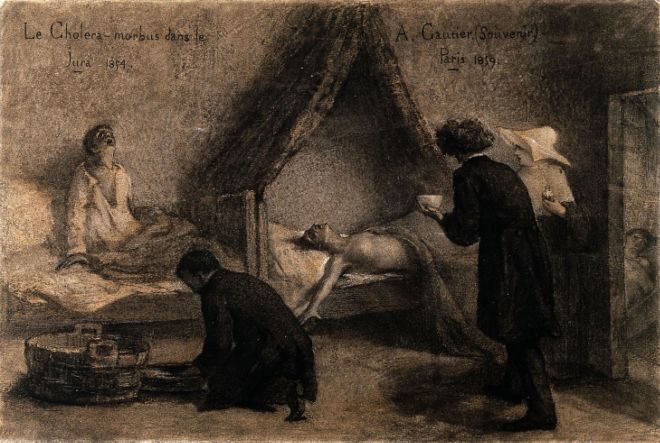 Cholera was another serious threat to humans worldwide. The bacteria infect the small intestines, causing mild to severe digestive symptoms and even death of dehydration if not treated. The disease likely originated somewhere in the Indian subcontinent, and the first cholera pandemic started in 1817 and lasted until 1824, spreading from India to the Middle East, Europe, Southeast Asia, and Eastern Africa.

Six more pandemics followed during the 19th century, with British ships carrying sick people being suggested to have contributed to the spread of the disease. At the time, the widespread belief was that cholera was transmitted through foul air, but a British doctor named John Snow started to suspect that infected drinking water may be responsible for the disease.

Snow created a map recording the 1854 cholera outbreak cases in London, and he managed to find the source of the disease – a contaminated drinking well called the Broad Street pump in Westminster. Snow used chlorine to disinfect the water in the well, and even convinced city officials to remove the handle of the well, rendering it unusable. This ended the outbreak, and the Broad Street pump cholera outbreak became a historic event.

Cholera outbreaks happen to this day, especially in places with poor living conditions that still use water pools as a source of drinking water, but thanks to the British physician, we now know how to disinfect the drinking water. Snow is known today as the father of modern epidemiology. 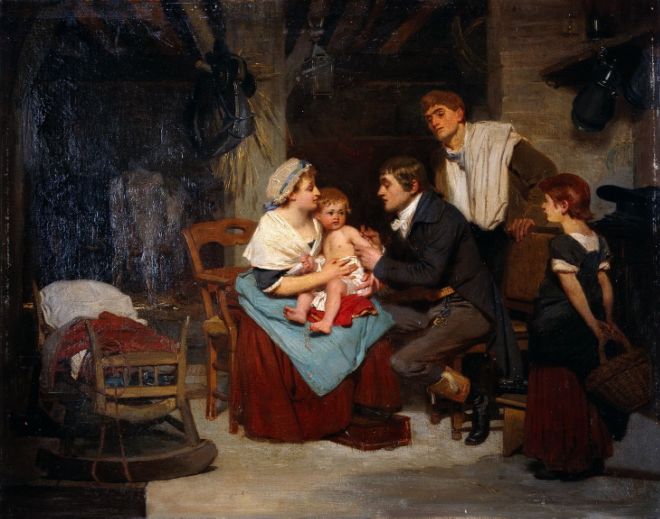 This disease caused by the Variola virus is one of the most terrifying and deadly ailments in human history. It is also non-existent today, and we have yet another medical innovation to thank for it – vaccines. For millennia, smallpox killed nearly every third person it infected in Europe, Asia, and the Middle East, with traces of the condition being found in Ancient Egyptian tombs.

However, the deadly disease would make even a more powerful hit when it would arrive in the New World in the 15th century. European colonizers transmitted the disease to the native populations in the Americas, who had absolutely no genetic immunity to the disease, increasing their likelihood to die to an overwhelming 90% and annihilating millions in modern-day Mexico alone.

The disease continued to spread and kill for centuries until British physician Edward Jenner made a groundbreaking discovery in the late 18th century. Jenner noticed that milkmaids who were previously infected by a weaker version of the virus, cowpox, ended up being immune to smallpox. As unethical as it may seem today, Jenner decided to infect a 9-year-old boy with cowpox and then subject the boy to smallpox to test his hypothesis. Luckily, the boy didn’t get sick, and Jenner created the first-ever smallpox vaccine.

More than a century later, in 1980, the once deadly disease was officially proclaimed nonexistent thanks to the development of vaccines. 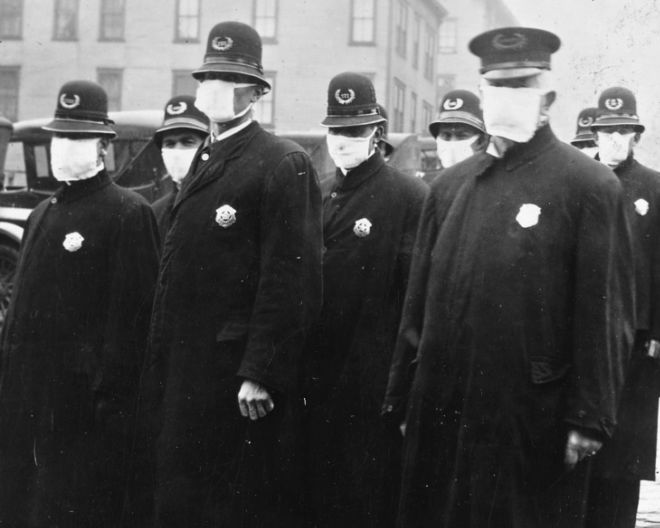 Not all medical lessons in history were the result of a success story, and one such example is the case of the Spanish Flu, a particularly devastating flu pandemic that swept through the world during World War I and made more than a third of the world population sick and killed between 50-100 million people.

Widespread disinfection of public spaces, a shutdown of public spaces, such as theaters and schools were widespread throughout the world, but many cities, particularly in the United States, failed to conduct any social distancing measures, which ultimately led to higher death rates. Instead, many cities incorporated a mandatory use of cloth face masks as the only means of protection from the disease – the first time this practice has been used. There were also fines against sneezing, coughing, spitting, kissing or talking outdoors in many cities in the US.

These measures alone without any effective quarantine practices and social distancing proved to be ineffective, and with the absence of a vaccine, the virus ended up being one of the most lethal epidemics in world history. 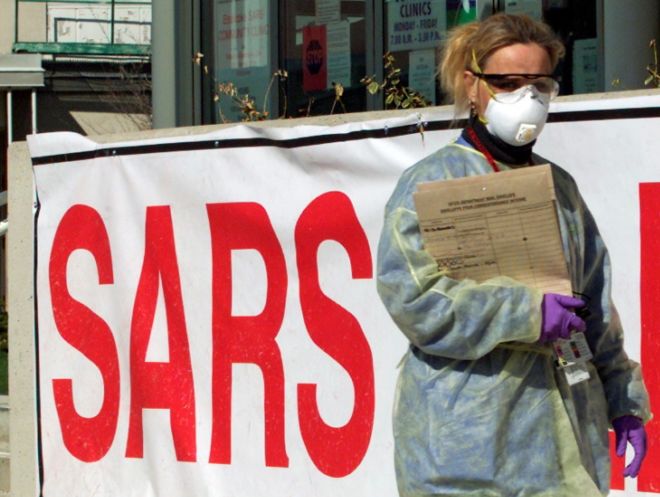 Throughout the 20th century, scientists developed vaccines against many major pathogens, including the flu. However, new unknown viruses continue emerging to this day, and the treatment and containment of these viruses became an increasingly complicated task due to globalization. One of the recent global health crises was the SARS coronavirus pandemic that started in 2002 when patients in the Guangdong province of southern China started exhibiting severe respiratory symptoms.

This was the first coronavirus to reach populations worldwide, spreading from China to 26 other countries, causing 770 deaths and infecting around 8,000. Seeing how fast a virus like SARS managed to spread to different corners of the world, the World Health Organization enabled a global framework to help alert, track, and manage newly-appeared pathogens. By the end of the year, the pandemic was over, international containment activities, such as widespread testing, isolation, tracing the spread of the disease, quarantines, and public information played an important role in the containment of the virus according to a 2008 summary article.

In summary, centuries of research and trial and error made people much better at limiting the spread of pandemics and minimizing the number of those affected by the pathogen. That being said, judging from the COVID-19 crisis, we still have much to learn on the subject.