From the tiniest veins, arteries and nerves to serial cross-sections of the spinal cord, these incredibly detailed dissections show and label most every part of the human body.

The collection is the product of a 17-year collaboration between David L. Bassett, a School of Medicine alumnus and faculty member known for his elegant dissections and love for the human body, and William Gruber, the photographer who invented the View-Master stereoscopic viewing device.

The partnership between the two resulted in the production of the
Stereoscopic Atlas of Human Anatomy, which began in 1948, but was not not completed until 1962. It consisted of 221 View-Master reels with 1,554 color stereo views of dissections of every body region. Each stereo view was accompanied by a black-and-white, labeled drawing and explanatory text.

A courtesy the Lane Medical Archives (thanks Drew!), today we present you some of the most impressive pictures of The Basset Collection. Meet the Human Body. 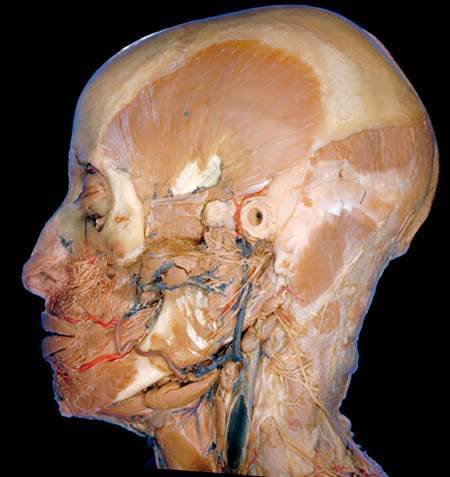 A deep dissection of the side of the head shows the many blood vessels (red arteries, blue veins) and nerves (graying white) in the facial region. The hole is the external ear canal. The temporal muscle, used for chewing, is the prominent fan shaped muscle on the side of skull, behind the mouth and above the jaw. 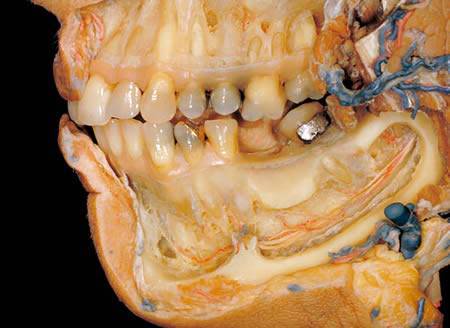 After the removal of an outer layer of bones around the jaw, the dissection shows blood vessels and sensory nerves to the lower teeth and chin. 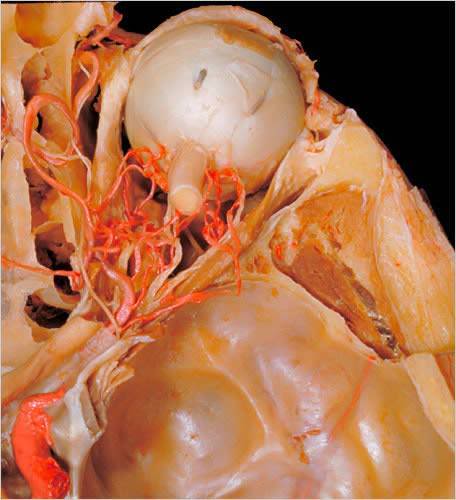 The onion-like structure is an eye, seen from above with the bony roof of the eye socket removed. The profusion of blood vessels and the muscles that rotate the eye are visible.

A pelvis from a woman, right, is lighter and wider than that of a man, left. The wider angle of a woman’s pubic bones at the base of the pelvis allows birthing of a baby. 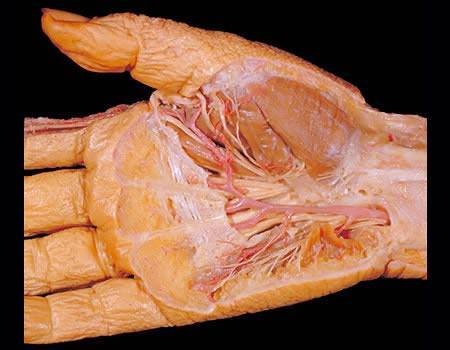 Removal of the skin and the layer of tough tissue beneath it, the palmar fascia, reveals a complex arrangement of blood vessels and nerves in the hand and wrist. 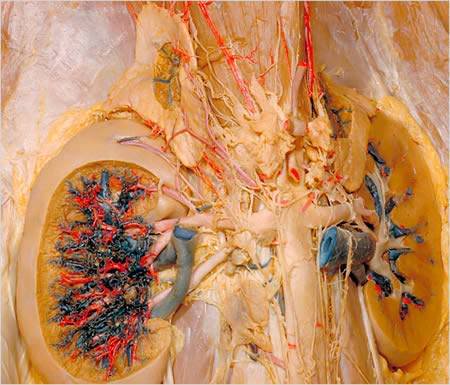 This dissection of the kidneys was done after red latex was injected into the arteries and blue latex into the veins. 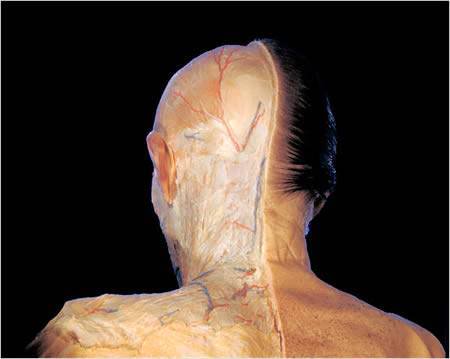 With all layers of the skin removed on the left side of the head and neck, the dissection displays the blood vessels and nerves of the scalp, almost all of which come from the periphery, not through the skull. Colored latex was injected into the blood vessels: red for arteries, blue for veins. The structures in the neck remain covered by a tough layer of tissue known as the cervical fascia. 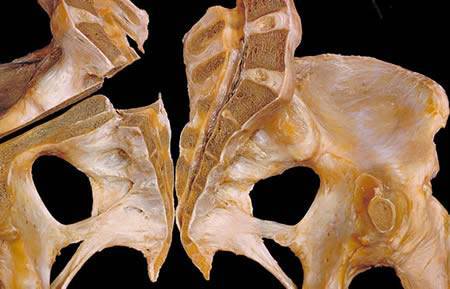 Inside the vertebral column, cut in half vertically, is a channel for the spinal nerves. The brown material is the bones; the white material is the intervertral disks that sometimes “rupture,” causing back pain. A horizontal split has been made on the left to show the connection of the sacrum, a triangular bone at the base of the spine, to the pelvis. 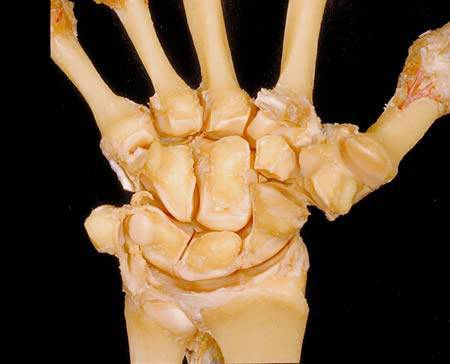 This view of the wrist joint features the two rows of four carpal bones each and shows how they are connected to the bones of the forearm and the fingers. 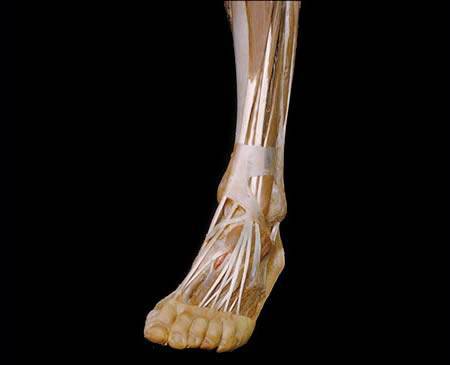 A dissection of the leg and the foot displays the long tendons connected to the toes, and the blood vessels and nerves to the top of the foot. 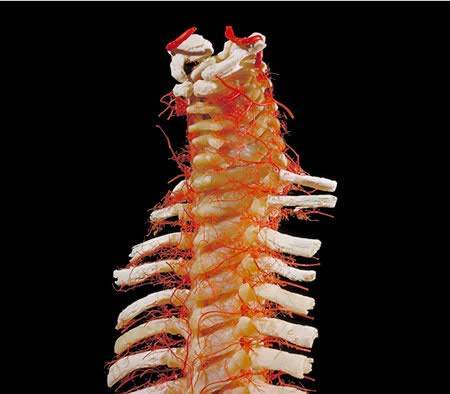 This dissection of the backbone was performed by Donald Stilwell, another Stanford professor, for the Bassett atlas. Note the profusion of arterial blood vessels nourishing the vertebral area of the neck and chest area. Also, at the top, the ends of the vertebral arteries, which pass into the skull to nourish the brain. 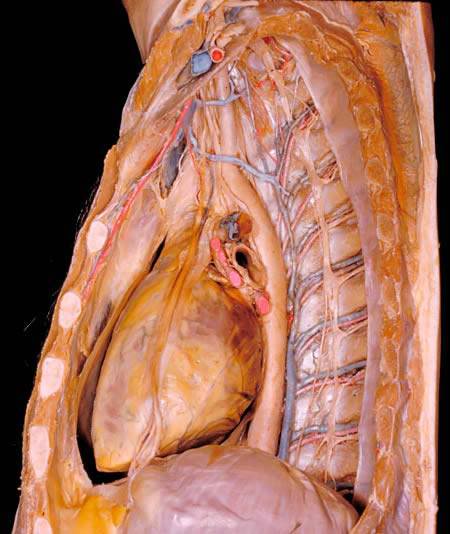 The mediastinum, a central chest compartment located between the lungs, houses the heart. Immediately to the right of the heart is the aorta, the largest artery of the body. To the right of the aorta are groups of blood vessels (one artery and two companion veins) that run between the ribs to distribute blood through the body. The phrenic nerve, which sends messages to the diaphragm to breath, is visible as it crosses the heart vertically. 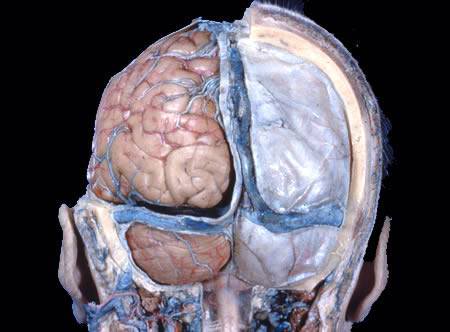 Dissection of the meninges and brain in situ. On the right the calvaria and layers of the scalp are shown in relation to the dura. On the left the dura has been cut away to reveal the cerebral hemisphere and cerebellum covered with the arachnoid membrane. The confluence of the sinuses is shown. 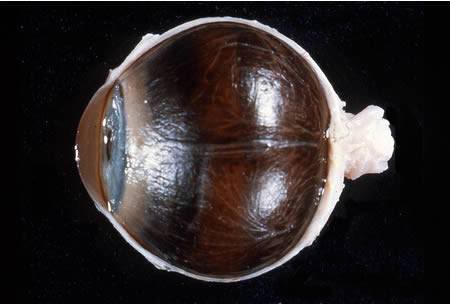 The sclera and cornea have been cut away on the medial side of a right eye to display the anterior chamber, iris, ciliary body and outer surface of the choroid. Although none of the vessels has been injected, the branches of the superior and inferior medial vorticose veins are clearly visible. The long posterior ciliary artery was cut across in the resection of the sclera but its course can be traced nearly to the ciliary body. 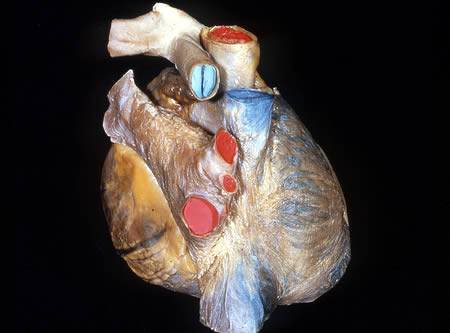 On this dissection of the heart, the epicardium has been removed from all parts of the atria with the exception of the left auricle. 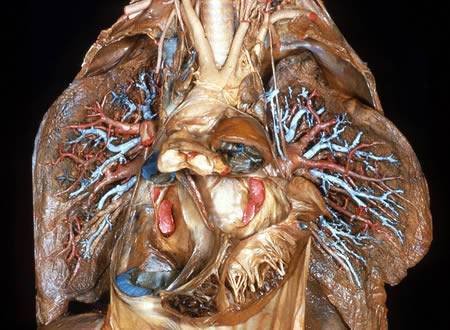 Dissection of lungs in situ. The lungs have been dissected from their medial surfaces and are reflected laterally for this image. Fragmentary portions of all of the chambers of the heart have been preserved. The great vessels have been kept intact, although the aorta and pulmonary trunk have been elevated to expose more posterior parts of the heart. 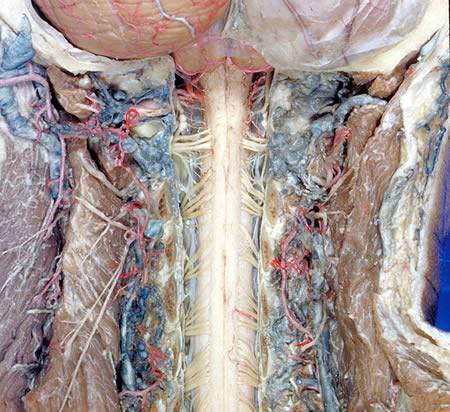 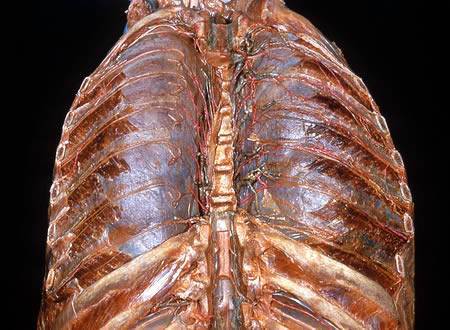 Dissection of thorax from a posterior approach. Ribs and vertebral bodies have been resected bilaterally between the second and the ninth thoracic segments. The periosteum which covered the inner surfaces of the ribs have been preserved in most areas. The anterior longitudinal ligament, with remnants of the intervertebral discs attached, has also been retained in part. The lungs have been inflated and are visible through the intact costal pleura. The proximal parts of the III-VII spinal nerves have been positioned on the pleura in such a way that their dorsal and ventral roots, dorsal rami and communications with the sympathetic trunks are visible. These components are labeled for the left seventh thoracic nerve. The intercostal arteries and veins have been cut off in various ways. 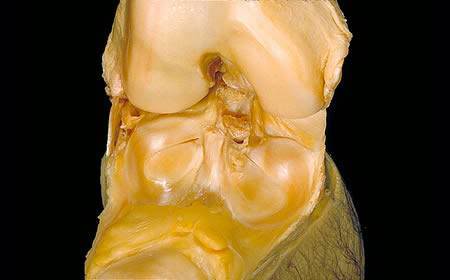 The knee joint opened from the front shows the inner surface of the knee cap or patella within its large ligament which is folded downward and forward. The ear shaped cartilages lie on the surface of the joint floor formed by the tibia. Between the cartilages one sees the cut ends of the cruciate ligaments so often injured in athletics and frequently reconstructed surgically. 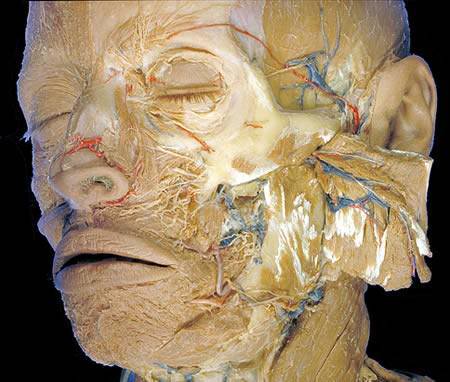 The Jawbone. The masseter muscle of mastication reflected back to expose the jawbone (mandible) and the related vessels, nerves and muscles.