From this release, you will learn about the products and dishes that even the celebrities do not always afford it. Did you know that part of the world’s most expensive dumplings? Do you know how to grow the most expensive potato in the world? Here is a list of foods that are rich, and not every day you can afford. 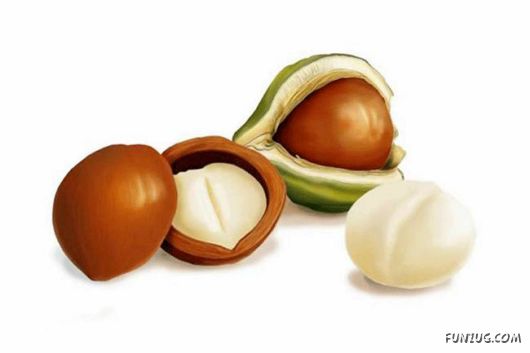 Everyone has long known the taste and quality of useful products. But the most expensive in the world’s macadamia nuts is considered. Once upon a time in Australian Aborigines this was the main course, but today it is considered rare, besides useful sophistication. Currently, all grown two kinds of nuts. The rarity of the product attached to the fact that the tree bears fruit macadamia though a hundred years old, in need of special care. Therefore, there are difficulties with the walnut growers and their prey – a year in the end is not more than 40 tons of it. As a result, in countries where this nut grows, the cost of a kilogram more than $ 30. Of course, with such dishes, and nuts are very valuable and expensive. 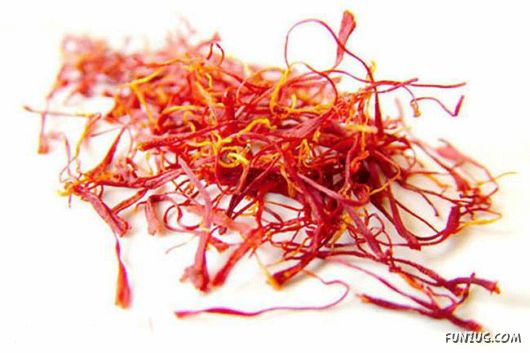 He is recognized as the most expensive spice. Saffron is actually a family of plants from the stamens krokusovyh. This spice is prepared by hand – first carefully collected and then dried. To get a kilo of saffron is necessary to collect nearly half the stamens. Not surprisingly, the price for a kilogram of saffron this comes to six thousand dollars. 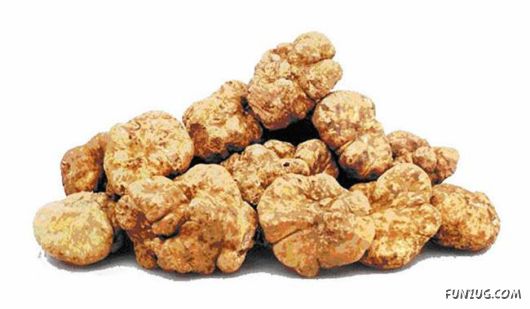 The exact price of this delicacy simply does not exist, because each mushroom is sold at auction. Record the cost of the fungus was more than 30 000 euros. 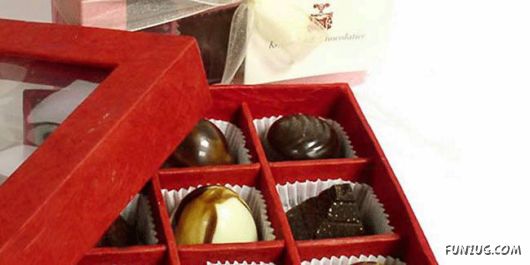 For lovers of exotic sweets can offer Chocopologie by Knipschildt – the most expensive chocolate in the world. The birthplace of this dark chocolate is America, and the tiles in 453 grams of a sweet tooth will cost in 2600 dollars. 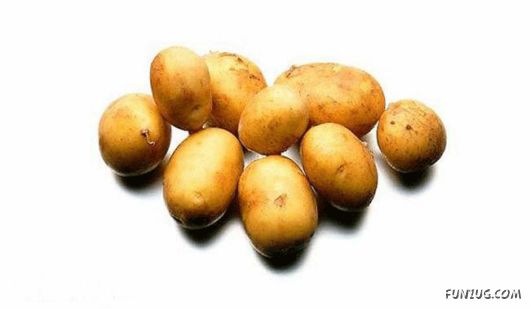 Availability of this product in the list may seem absurd, but, and this dish can cost dearly. The most expensive potato varieties in the world "La Bonnotte" is in the area of 500 euros per kilo. It grows on the island Nurmuate root, collect a treat of course manually. A distinctive feature of the dish is extremely delicate flavor of potatoes. 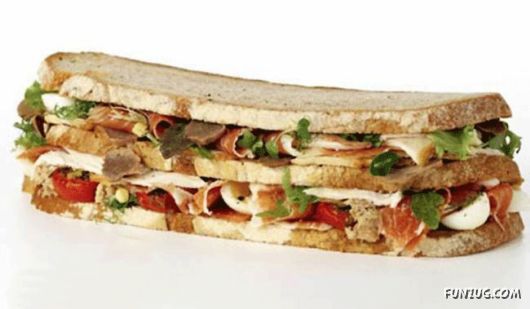 For those who like to eat on the run made the most expensive burger in the world. His full name – "Platinum Club Sandwich von Essen" (von Essen Platinum Club Sandwich). Meet this dish can be exclusively in the hotel chain, "Von Essen." It should be a sandwich "only" $ 200, and it includes a special sourdough bread, Iberian ham, white truffles, quail eggs, dried Italian tomatoes and Bresskaya poulard. 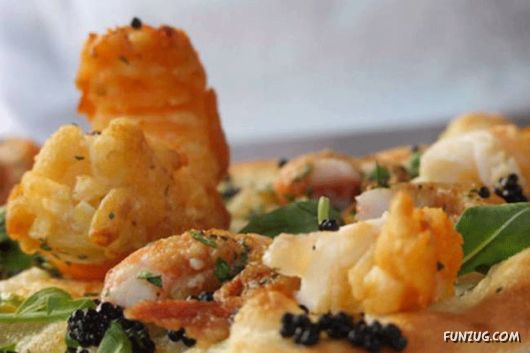 The most expensive pizza in the world offers this dish at home – in Italy. It’s called "Luis XIII", and the cost of reaching Euro 8300. This is definitely a pizza cooked in the presence of the client, and it is composed of buffalo mozzarella, red lobster, three kinds of caviar, lobster and shrimp. In a dish cookery is not used or even sea salt – is the Australian Pink "Murray River". 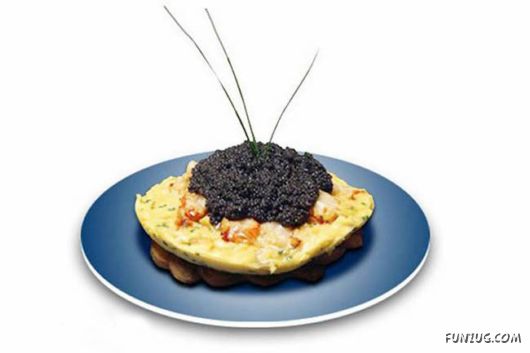 Lovers of exotic omelet is the place to try it in a New York hotel "Le Parker Meridien". This is where you can order the most expensive omelet in the world, the cost of one thousand dollars. Naturally it includes not only the eggs, there are lobsters and whole. Served on a bed of a dish of fried potatoes, and its decoration is a scattering of Sevruga caviar. 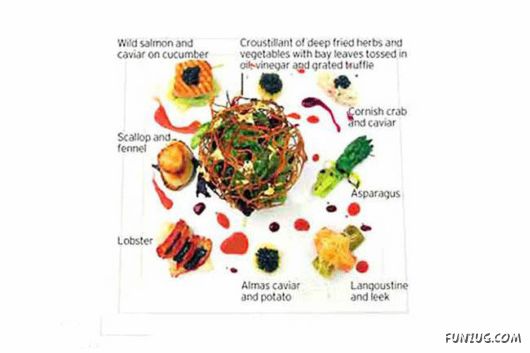 The most expensive salad in the world is known as "Florette Sea & Earth". Its you cook at the Oxford Hotel "Le Manoir aux Quat Saisons". The cost per serving "Florettskih sea and land" is 800 euros, and a convoy with 50 grams of elite white beluga caviar, Cornish crab, lobster, lobster, florettsky young lettuce, a little olive oil, red pepper, grated truffles, potatoes and asparagus. The dish is decorated with gold foil 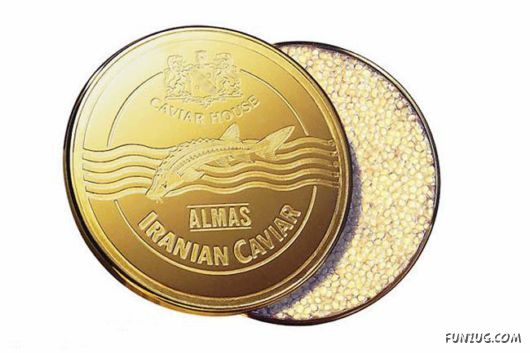 Usually it is considered that the most expensive caviar – a gray or black. However, this is not true, the most expensive caviar in the world considered to be the spawn "Almas" beluga-albino. Also available is a treat from Iran is very difficult, it is packed in a gold jar, and is a true masterpiece of art, not just cooking. One hundred grams of a delicacy worth two thousand dollars.
Coffee 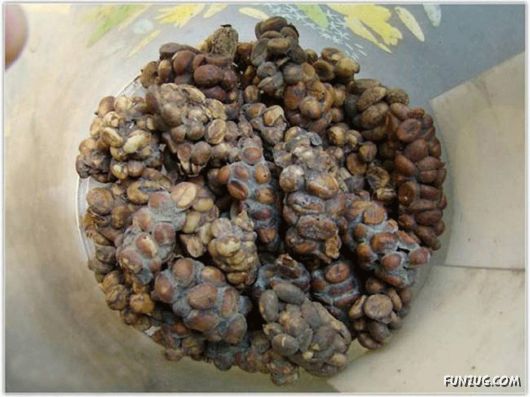 The most expensive coffee in the world – "Kopi Luwak" – made from the seeds is not some sort of unique, but rather a unique way of life. "Kopi" in Indonesian means "coffee" and "Luwak" – a small, small carnivores, who loves to eat ripe fruit of the coffee tree, choosing the best. Coffee, he eats a lot more than it can digest. Undigested grains passing through the intestines of animals, exposed to enzymes, and as lovers swear by the "Kopi Luwak", acquired the unique taste and aroma. One kilogram of coffee, which helped to be born Luwak, costs from 300 to 400 dollars. 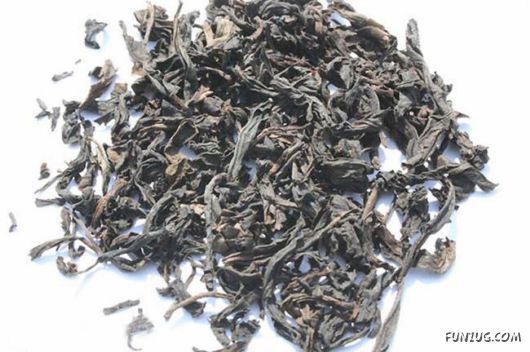 The most expensive tea in the world is Dahunpao, which translated means "big red gown." He refers to the Oolong (fermented teas strong, having an intense flavor and aroma). Get the "Big red robe" from the list of six shrubs growing near the monastery Tianxing. The age of these unique clusters – 350 years old. Each year, collected no more than 500 grams of the legendary tea, the cost of the finished product reached 685,000 dollars per kilogram. In 2006, the year the entire crop deposited in the National Museum of Chinese tea, a further fee moratorium was declared. However, with the 80-ies mother bushes are propagated vegetatively. The resulting tea with them, too, called "Big red robe", but experts believe that it is not any comparison with the present Dahunpao.