They skydive, go to proms and even swing. Meet the world’s oldest people, ten elders who prove age is no excuse to stop living. 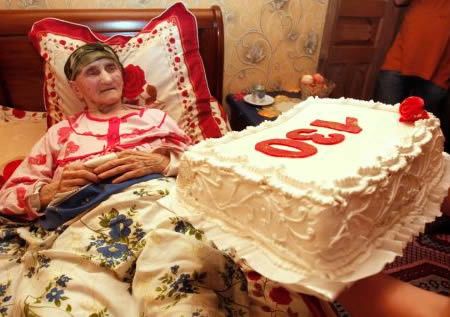 Authorities in the former Soviet Republic of Georgia claim a woman from a remote mountain village turned 130, placing her at the top of the world’s oldest people. Antisa Khvichava from western Georgia was born on July 8, 1880, said Georgiy Meurnishvili, spokesman for the civil registry at the Justice Ministry. The woman, who lives with her 40-year-old grandson in an idyllic vine-covered country house in the mountains, retired from her job as a tea and corn picker in 1965, when she was 85, records say. ?I’ve always been healthy, and I’ve worked all my life ? at home and at the farm,’ Antisa said, in a bright dress and headscarf ? and red lipstick. Sitting in a chair and holding her cane, Antisa spoke quietly through an interpreter ? since she never went to school to learn Georgian and speaks only the local language, Mingrelian. 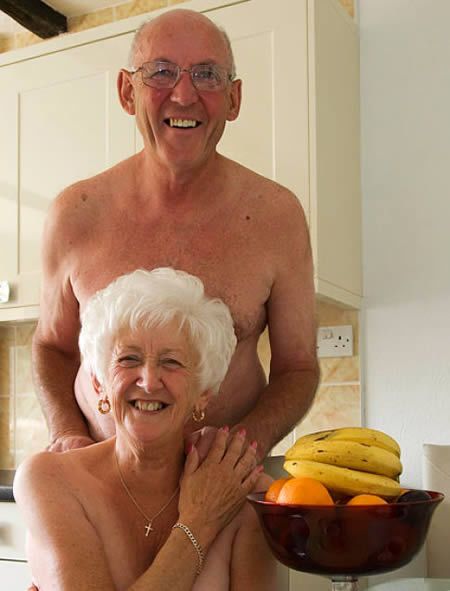 Britain’s oldest married swingers are celebrating 30 years of ?total and utter hedonism’ and are still enjoying partner-swapping parties ? aged in their 70s. Retired Ian and Jean Smith ? dubbed the ?King and Queen of the Swingers’ ? have taken part in more than 300 ‘wild’ sex parties since the 1970s. The couple, who have eight grandchildren, say their appetite for ‘no strings’ sex has only increased with age. But they credit their ‘open relationship’ and ‘free and easy’ attitude as the secret to a long and happy marriage. 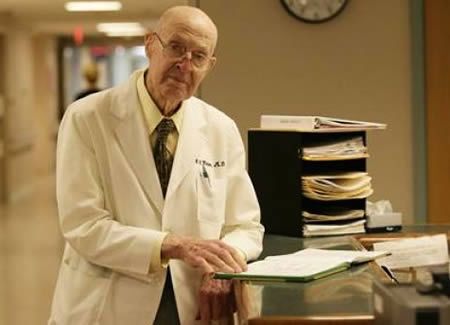 A doctor who has delivered 18,000 babies over a career spanning more than 60 years is still practicing at 100 years old. Dr Walter Watson, nicknamed ‘Papa Doc’, has been present at the births of generations spanning from grandparents down to grandchildren during his 63 years as an obstetrician. The doctor from Augusta, Georgia, USA, is thought to be the oldest practicing medic in the world. Among his patients is Sabra Allen, 77, who he has treated for 59 years. He has delivered 17 members of her family. ?He delivered all five of my kids and twelve of the grandkids,? said Mrs Allen, a retired hospital administrator. ?There ain’t no one like him, he’s the best.? 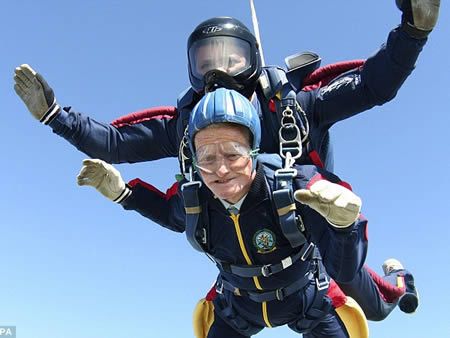 A 97-year-old daredevil is believed to be the oldest skydiver, after he jumped from an aircraft in 2009. George Moyse and his grandson Edward Brewer, 43, leapt from a plane flying at 10,000ft with their instructors at the Netheravon Airfield in Wiltshire. For the first 5,000ft, they made a freefall at nearly 120mph before their parachute released and they enjoyed a more tranquil descent ? landing safely on Salisbury Plain. 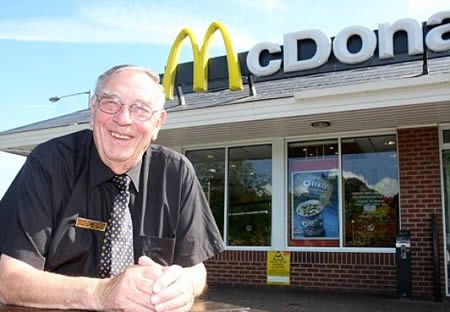 Grandfather Bill Dudley is Britain’s oldest McDonald’s worker ? aged 85. He says the staff are like family and he wouldn’t be without his part-time job. Bill, a retired taxi driver, greets customers and wipes tables at the fast food outlet in Mold, Clwyd. He says he’s fighting fit for his six-hour shifts every Wednesday and Thursday, despite a pacemaker, angina and a new knee. ?Sitting at home can get boring, I’m not a drinker and my wife won’t let me touch the garden, because she does all that,’ the former taxi driver said. ‘A lot of the customers don’t believe I’m 85. They look at me and think I’m in my 60s. I just like the job. I like talking to people and meeting people. That’s why I loved the taxi work ? I like solving their problems. A lot of the people working here are much younger than me, like a whole different generation, but they feel like family.’ 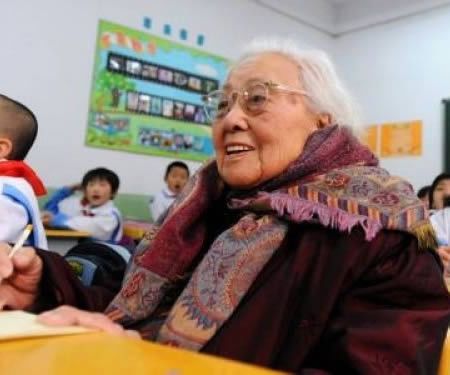 New primary-school pupil Ma Xiuxian, aged 102, has proven you’re never too old to learn after becoming the world’s oldest first-year pupil. Ma started work in a cotton mill at the age of 13 and never got the chance to go to school as a child. She says taking her place at her desk in the Grade One class at Weshan Road Elementary School in China was a dream come true. The school apparently offered her a place in the elementary class after reading about her education ambitions in a local newspaper. 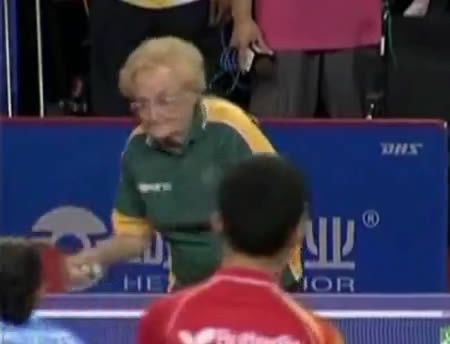 Australia has a new international sports champion but she’s unlikely to be offered any lucrative contracts for sportswear modeling or mobile phones. Turning 100 in October, Dorothy De Low, from Hurstville in Sydney’s west, was the oldest of the 2000 competitors in the 15th World Veterans Table Tennis Championships held in Hohhot, China, in June 2010. 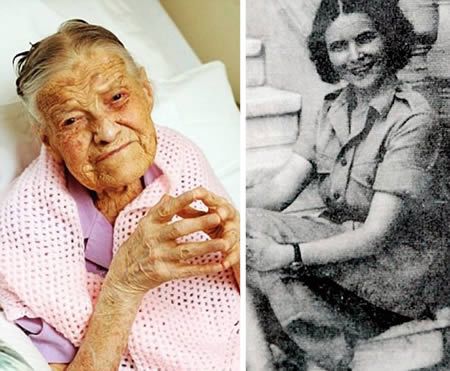 World’s oldest virgin has revealed the secret of her longevity on the eve of her 105th birthday ? no sex. Clara Meadmore has never had sex in her life because she has always been ‘too busy’ for intimate relationships and it seemed like ‘a lot of hassle’. Miss Meadmore, who remembers the Titanic sinking and the outbreak of the First World War, said she knew she would remain single from the age of 12, and abstained as a young woman in order to concentrate on earning a living. The former secretary says she has no regrets about remaining a virgin and had turned down several marriage proposals. 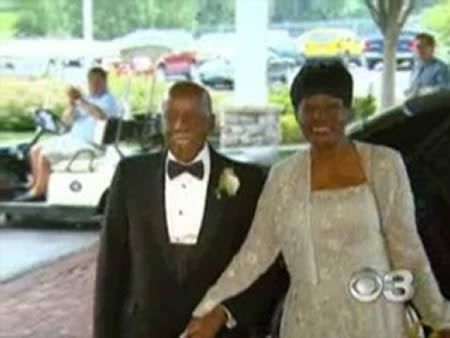 He arrived in style: a black limo, a sharp tuxedo, a beautiful date and an adoring crowd waiting for him. Eighty-four-year-old Kenneth Smith attended the Chester High School prom night fashionably late. Decades late. Smith was drafted into military service in 1943, before he could finish high school. He returned home after World War II but never got his high school diploma. A friend arranged for him to receive an honorary diploma from Chester High School, just outside Philadelphia, and finally go to the prom. He did ? at the Springfield Country Club. Smith said this prom wasn’t just for him. He said it was also for all the other soldiers who couldn’t make it to their own. 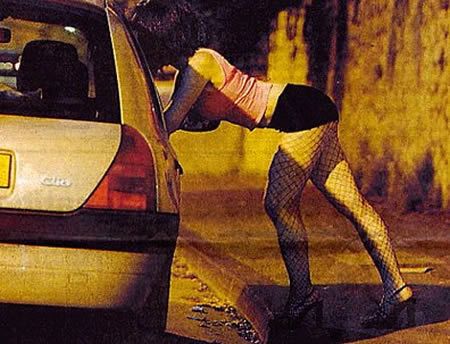 Prostitution is commonly known as the world’s oldest profession. Meanwhile police in Tai Pei estimate an 82 -year-old nicknamed “Grandma” to be the oldest living, working prostitute. Chiu went into the business about 40 years ago, after a man she had lived with for two decades died. She stays in the business charging ten or twenty times less than others prostitutes.