Nature never stops to amaze us with its magnificent phenomenon just like these inexplicable holes in the ground. These holes make an excellent tourist attraction. Check out these unreal photographs and location descriptions of 9 of world’s most famous pits and sinkholes. (Courtesy of National Geographic) 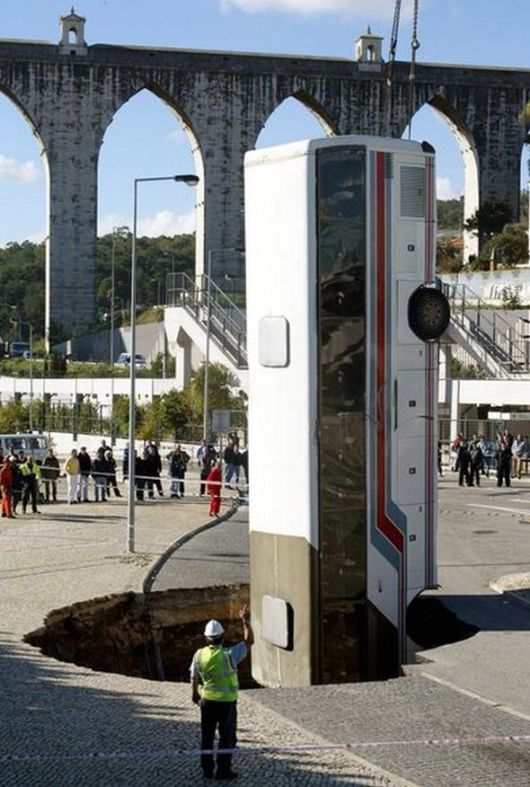 A parked bus was the unfortunate "meal" of a sinkhole that opened up in the streets of Lisbon, Portugal, in 2003.
"Anything that increases the flow of water into subsurface soil can speed up the formation of sinkholes’" ,Missouri State’s Gouzie said. In many cities, utility infrastructure such as sewer lines and fiber optic cables are buried in troughs filled with loose material, which can wash away over time. In some cases, a stretch of road can essentially become a concrete bridge over mostly empty space.
"It’s eventually not enough to hold the weight of the next truck over it," Gouzie said.
2. Guatemala Sinkhole 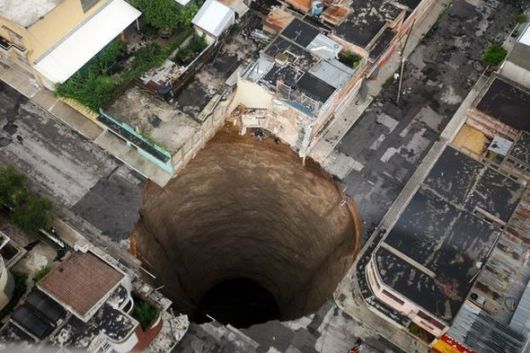 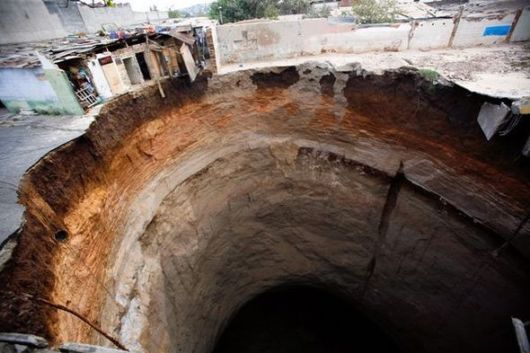 Heavy rains from tropical storm Agatha likely triggered the collapse of a huge sinkhole in Guatemala on Sunday, seen above a few days afterward.
In the strictly geologic use of the word, a sinkhole happens when water erodes solid bedrock, carving an underground cavity that can then collapse. Many parts of the United States are at risk for that type of event.
The Guatemala sinkhole fits into a broader use of the term, which refers to any sudden slump of the ground’s surface. Instead of solid bedrock, much of Guatemala City rests atop a layer of loose, gravelly volcanic pumice that is hundreds of feet thick. And at least one geologist says leaking pipes-not nature-created the recent sinkhole.
Overall, the risk for repeat sinkholes in Guatemala City is high-but highly unpredictable. 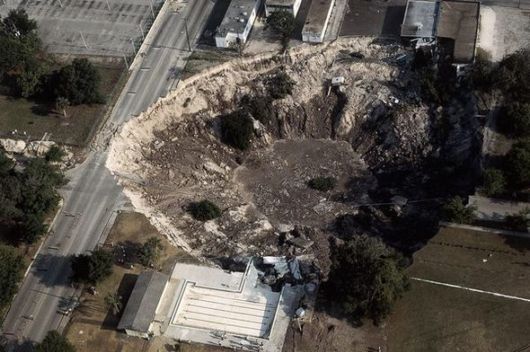 he sinkhole in Winter Park, Florida (map), opened up in 1981 underneath the city’s public swimming pool, Missouri State’s Gouzie said.
"I’ve never seen a final report as to whether the pool was leaking," he said, adding that water can flow into the underlying soil through tiny cracks in the bottom of a pool. Even watering plants at the pool’s perimeter could have sent enough runoff through Florida’s sandy soil to erode the solid limestone underneath.
Gouzie said the U.S. Geological Survey has mapped the types of bedrock that exist across the country. But studies of the underground cracks and fissures-and the way water travels through them-are still needed to predict where sinkholes could occur. 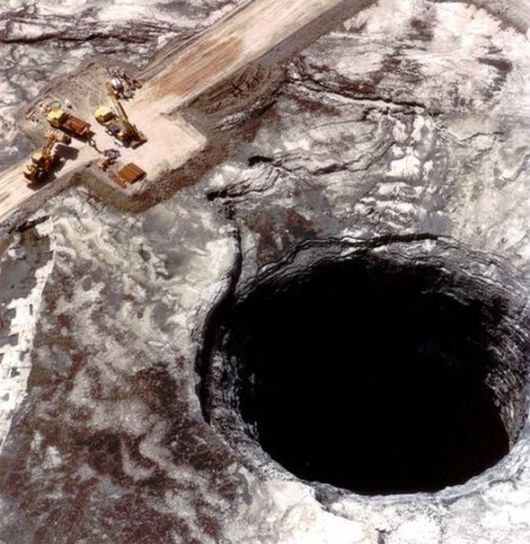 This 185-foot-deep (56-meter-deep) sinkhole appeared in 1994 in Mulberry, Florida (map), in a pile of waste material dumped by mining company IMC-Agrico. The company was mining rock to extract phosphate, a main ingredient in fertilizers and a chemical used to produce phosphoric acid, added to enhance the taste of soda and various food items.
After phosphate was extracted from the rocks, the gypsum-based waste product was dumped as a slurry. As layer after layer of the stuff dried, it formed cracks, like those that appear in dried mud. Water later made its way through the cracks and carried away subsurface material, setting the stage for a sinkhole. 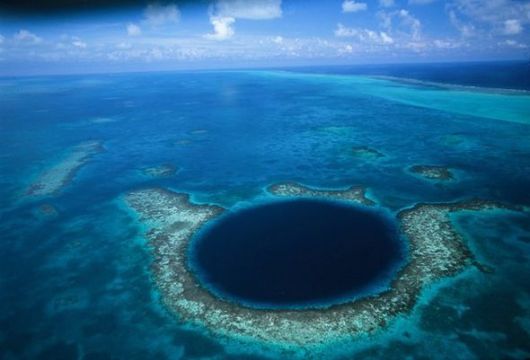 Sinkholes can happen anywhere water can erode a vertical channel that connects to a horizontal drain, a situation that allows a column of solid material to wash away, Missouri State’s Gouzie explained.
If the sinkhole is near the sea-or in the sea, as with the famous Blue Hole in Lighthouse Reef off the coast of Belize-seawater can quickly seep in after a collapse, forming a deep pool. 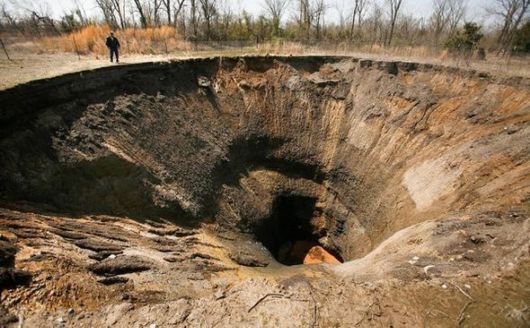 Years of mining for zinc and lead has left Picher, Oklahoma, near the border with Kansas, literally full of holes-including this sinkhole seen in 2008. Some mines were dug too close to the surface, and the roofs were unable to support the weight of earth on top, leading to collapses.
"It has happened in Missouri and in western Pennsylvania from coal mining," Missouri State’s Gouzie said. "We’ve gotten better with buidlng mines so the roofs can support the weight over top of them." 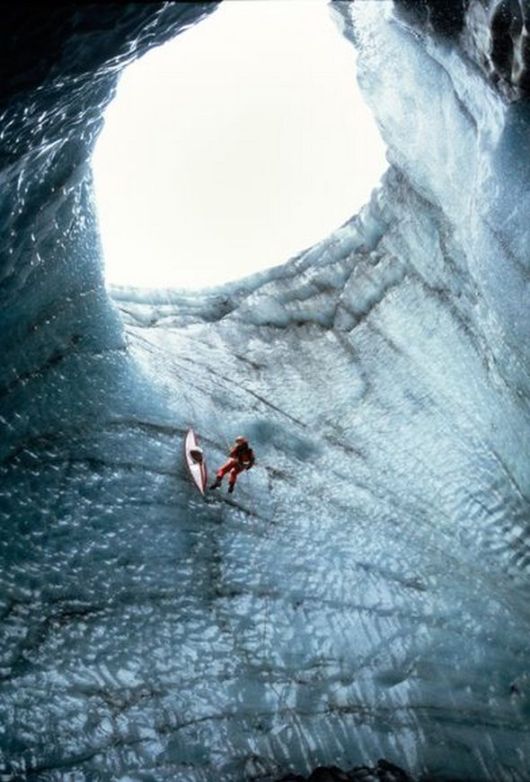 Adventure kayaker Mick Coyne lowers himself down the wall of a sinkhole toward the headwaters of the Jokulsa, Iceland’s second longest river. Though the river is fed by melt from a glacier, this 150-foot (45-meter), inverted funnel-shaped hole was blasted into being by rising steam from geothermal vents below. 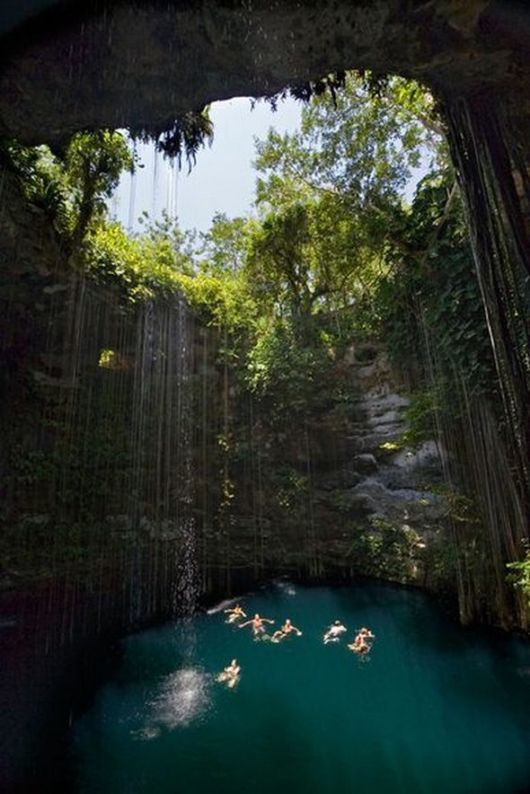 Swimmers float in the saphirre waters of the Ik-Kil cenote, near the Maya site of Chichén Itzá in Mexico’s Yucatán Peninsula. Cenote means "natural well" in Spanish. Sinkholes occurring at sea level will fill up as high as the water table, creating the famous clear blue pools, used by the Maya royalty for both relaxation and ritual sacrifices.
9. Neversink Pit, Alabama 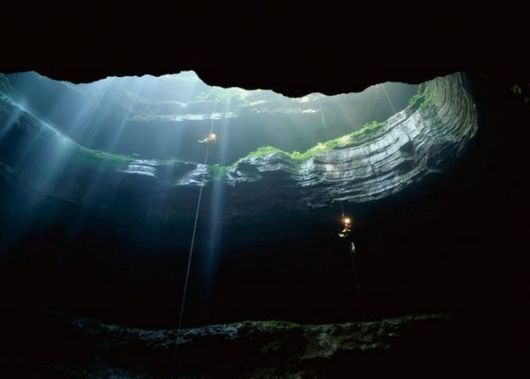 Neversink Pit, a wet limestone sinkhole in Alabama seen above in 1998, is about 50 feet (15 meters) deep and houses a rare species of fern. The sinkhole was bought in the 1990s by a group of cavers to preserve it for future generations.
Karst is the geologic term for landscapes formed mainly by the dissolving of limestone or dolomite bedrock. In the United States, karst underlies parts of Missouri, Arkansas, Kentucky, Tennessee, northern Alabama, Texas, and most of Florida. Such areas are marked by sinking streams, subterranean drainage, large springs, caves-and, of course, sinkholes.