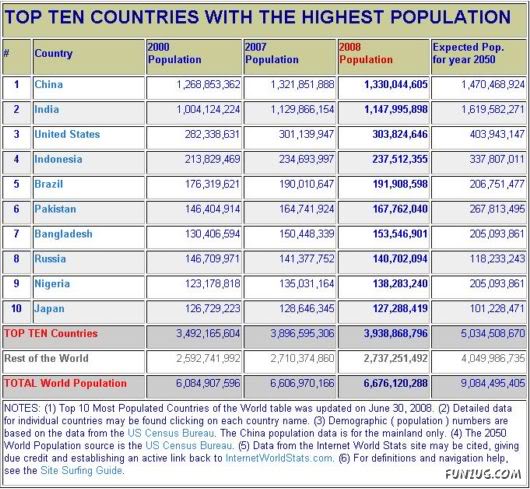 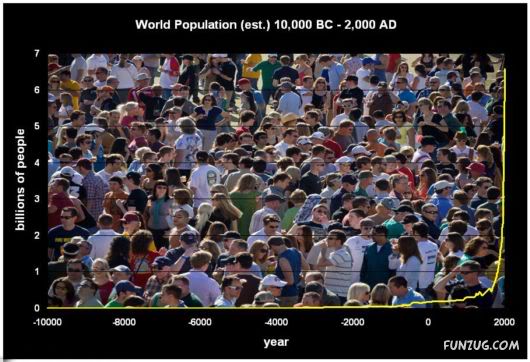 Population Change from 1950-2010, both in absolute numbers and in % change. Note the dip around 1960 when the Chinese famine occurred

In 1798 Thomas Malthus incorrectly predicted that population growth would outrun food supply by the mid 19th century. In 1968, Paul R. Ehrlich reprised this argument in The Population Bomb, predicting famine in the 1970s and 1980s. The dire predictions of Ehrlich and other neo-Malthusians were vigorously challenged by a number of economists, notably Julian Lincoln Simon. Agricultural research already under way, such as the green revolution, led to dramatic improvements in crop yields. Food production has kept pace with population growth, but Malthusians point out the green revolution relies heavily on petroleum-based fertilizers, and that many crops have become so genetically uniform that a crop failure would be very widespread. Food prices in the early 21st century are rising sharply on a global scale, and causing serious malnutrition to spread widely.

From 1950 to 1984, as the Green Revolution transformed agriculture around the world; grain production increased by 250%. The energy for the Green Revolution was provided by fossil fuels in the form of fertilizers (natural gas), pesticides (oil), and hydrocarbon-fueled irrigation. The peaking of world hydrocarbon production (Peak oil) may test Malthus and Ehrlich critics.As of May 2008, the price of grain has been pushed up by increased farming for use in biofuels,world oil prices at over $140 per barrel, global population growth,climate change, loss of agricultural land to residential and industrial development, and growing consumer demand in China and India. Food riots have recently occurred in many countries across the world.

The world population has grown by about four billion since the beginning of the Green Revolution and most believe that, without the Revolution, there would be greater famine and malnutrition than the UN presently documents (approximately 850 million people suffering from chronic malnutrition in 2005).

On the opposite end of the spectrum, a number of people argue that today’s low fertility rates in Europe, North America, Japan and Australia, combined with mass immigration, will have severe negative consequences for these countries.

Child poverty has been linked to people having children before they have the means to care for them. Some scholars have put forward the Doomsday argument applying Bayesian probability to world population to argue that the end of humanity will come within 9,000 years.
Population by region, 2007 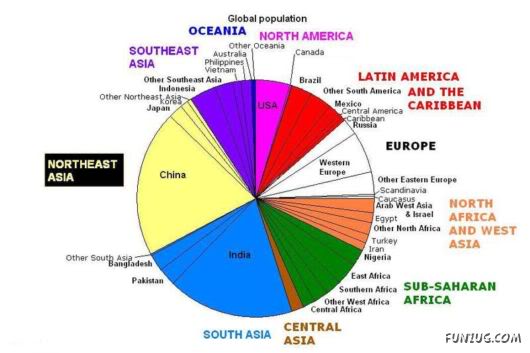 Number of humans who have ever lived

In the 1970s it was popular to believe that 75% of all the people who had ever lived were alive in the 1970s, which would have put the total number of people who ever lived as of the 1970s as less than the current number of people alive today. This view was eventually debunked as a myth. A more recent estimate of the total number of people who have ever lived was prepared by Carl Haub of the Population Reference Bureau in 1995 and subsequently updated in 2002; the updated figure was approximately 106 billion. Haub characterized this figure as an estimate which required “selecting population sizes for different points from antiquity to the present and applying assumed birth rates to each period”.Given an estimated global population of 6.2 billion in 2002, it could be inferred that about 6% of all people who had ever existed were alive in 2002.

Other estimates of the total number of people who have ever lived range approximately from 45 billion to 125 billion, with the more robust of these falling in the 90?110 billion range. It is difficult to estimate for the following reasons:

* The set of specific characteristics which define a human being and distinguish early Homo sapiens from earlier or related species continues to be a subject of intense research and debate. It is thus not possible to know when to begin the count, nor which hominids to include. See in this regard also Sorites paradox.
* Even if the scientific community reached wide consensus regarding which characteristics distinguished human beings, it would be nearly impossible to pinpoint the time of their first appearance to even the nearest millennium because the fossil record is simply too sparse. Only a few thousand fossils of early humans have been found, most no bigger than a tooth or a knucklebone. These bone fragments are used to extrapolate the population distribution of millions of early human beings spread across the continents.
* Robust statistical data only exist for the last two or three centuries. Until the late 18th century, few nations, kingdoms, or empires had ever performed an accurate census. In many early attempts, the focus was on counting merely a subset of the people for purposes of taxation or military service[citation needed]. All claims of population sizes preceding the 18th century are estimates, and thus the margin of error for the total number of humans who have ever lived should be in the billions, or even tens of billions of people. 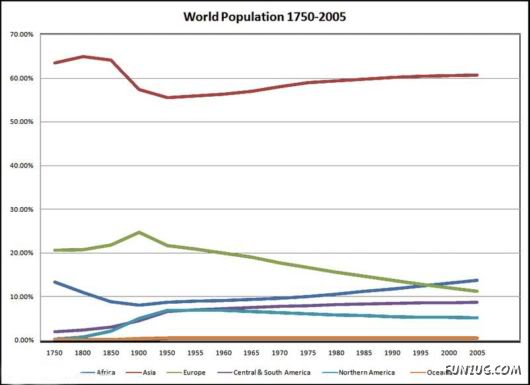 Population by continent as a percentage of world population (1750?2005)