Maybe you?re a coffee-shop junkie or a cold-brew devotee. Or maybe you prefer to keep it old school with a trusty drip coffeemaker. However you consume it, if you?re among the 59 percent of Americans who drink coffee, that java buzz after downing a cup is probably familiar to you.
But chances are, you aren?t aware of the extent to which this beverage can affect nearly your entire body (from your eyes to your blood) within minutes post-sip. We took a look at how a cup of coffee affects the system right after you drink it ? and some of what we found is pretty astounding. 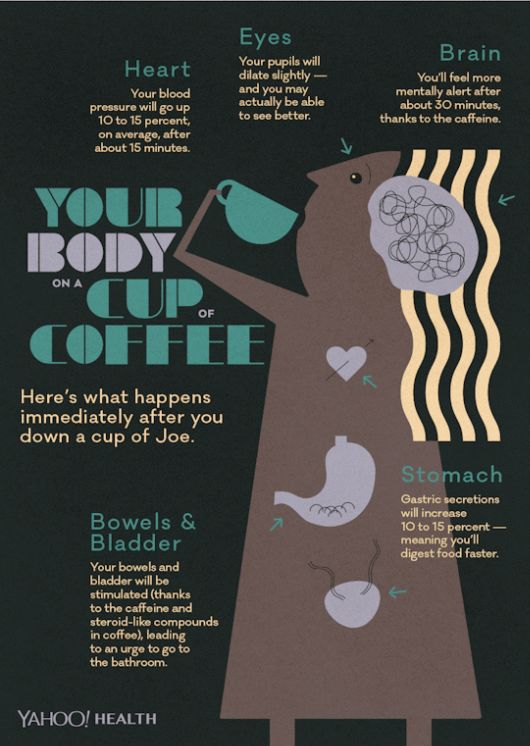 Your Brain
If you need to buckle down and push through a tight deadline or stay alert for a long drive, a mug of Joe can be your BFF. ?Caffeine is a stimulant, and some evidence shows that it can increase mental functioning and strengthen your ability to concentrate,? says Marc Leavey, MD, a primary care specialist at Mercy Medical Center in Baltimore.
In a nutshell, the brain works by sending out chemicals called neurotransmitters through synapses ? that?s how we are able to think. Caffeine is a psychoactive compound that modulates these neurotransmitters, allowing them to operate more efficiently. ?As a result, the brain is able to better process chemical messengers,? Leavey explains to Yahoo Health. ?When used in moderation, coffee gives you an edge.? You?ll begin to feel more mentally alert after about 30 minutes, and the effects wear off a few hours later.
The key word, of course, is moderation. Too much caffeine can overwhelm your system and sabotage your concentration, so that instead of feeling amped up, you?re anxious and jittery.

Your Eyes
Caffeine also triggers your sympathetic nervous system (which regulates your body?s unconscious activity), activating fight-or-flight mode. ?It stimulates the receptors in your brain that tell your body to rev up and produce more adrenaline,? explains Nieca Goldberg, MD, cardiologist at NYU Langone Medical Center. One possible outcome? Sharper vision.
?Research suggests that if you drink coffee, your pupils may dilate very slightly,? Leavey says. ?It?s so subtle that you wouldn?t be able to notice it just by looking in the mirror, but you may feel that you can see better.?

Your Teeth
You know too much coffee can give your pearly whites a corn-kernel effect, but there?s also an oral upside to your daily fix. ?Coffee contains a fair amount of polyphenols, micronutrients that have been shown to be effective in killing oral plaque and bacteria,? says NYC-based dentist Keith Arbeitman. The catch: As soon as you add milk, sugar, or maple-gingerbread-Creamsicle-Nutella syrup, those very same benefits backfire.
?It?s a double-edged sword, because once the polyphenols dissolve the layer of plaque, milk and sugar can easily access areas deep within the teeth,? Arbeitman explains to Yahoo Health. ?This leads to demineralization and eventual decay.? Basically, as long as you stick to black, you?ll be doing your teeth a favor. Otherwise, you?re making them even more vulnerable to cavities than usual.
Those plaque-demolishing polyphenols are also responsible for exposing your chiclets to discoloration, be it from the coffee itself or food you?re eating at the same time. (Major offenders are berries, brightly colored candy, and tomato or curry sauce. Arbeitman?s rule of thumb is that if it will stain your shirt, it?ll stain your teeth.) ?Try drinking from a straw to limit the amount of time the sugars have to hang around in your mouth,? he suggests. ?Or brush your teeth afterward to correct your oral pH and neutralize residual sugars.?
Related: Here?s Exactly When You Should Drink Coffee for the Most Energy

Your Heart
If you heart coffee, you should know that the most immediate physical effects of a hit of java are indeed cardiovascular. ?Caffeine increases the sensitivity of your neural pathways so that the electrical impulses responsible for triggering your cardiovascular system pass through the body more easily,? Leavey says. ?Consequently, about 15 minutes after drinking a cup, the caffeine begins to elevate your pulse and blood pressure by an average of 10 to 15 percent.? (The exact amount varies depending on a bunch of factors ? including how much you?ve drunk, whether you?re a regular coffee-drinker, how much food you?ve eaten, your weight, medications you?re taking, etc.)
According to Leavey, consuming two six-ounce cups a day isn?t hazardous for most people, but a greater intake can be problematic if you have underlying issues like heart disease, high blood pressure, or tachycardia (faster-than-normal heart rate). ?It may increase cardiovascular activity to the extent that it can cause a heart attack,? he says.

Your Stomach
There?s some rationale behind downing an after-dinner espresso. ?Caffeine triggers the receptors in your stomach, boosting gastric secretions by about 10 to 15 percent ? a small, but meaningful, increase,? says Leavey. These higher levels of acid help you digest your meal faster.
The flip side of your G.I. tract?s elevated motility is potential cramping, acid reflux, or heartburn. ?Caffeine relaxes the sphincter, which is a bundle of muscles located at the base of your esophagus that acts as a gate to keep food from entering your trachea,? says Goldberg. ?As a result, stomach contents can travel backward into the esophagus.?
Related: Turns Out Decaf Coffee Has Body Perks Too

Your Bowels
Heads up: Skip this section if you?re eating ? we?re gonna get a little graphic. Hand-in-hand with a quick-acting stomach is lightning-fast bowel activity ? which means you may be struck by a tush-quake.
?Caffeine stimulates your bowels, telling them to work harder and faster,? Leavey explains. ?But fecal matter has to remain in the bowels for a certain length of time in order to become a solid. If it moves too quickly, it will emerge still in liquid form.? Irritable Bowel Syndrome (IBS) sufferers are particularly at risk.

Your Bladder
As every devoted coffee drinker knows, it?s dangerous to gulp your way through a Grande when you?re stuck in traffic or miles away from a bathroom. ?Coffee acts as a diuretic, influencing the tubules in your kidneys to send more water through,? Leavey says. ?That, in turn, leads to increased urinary output.?
Interestingly, the diuretic effects exist whether you?re drinking regular or decaf, so it?s not the caffeine at play. ?Coffee contains other stimulating compounds, including steroid-like molecules that physiologically provoke the bowels and bladder,? Leavey adds.

Your Blood
Unless you?re indulging in a calorie-laden, whipped-cream-and-chocolate-sauce-topped frozen coffee drink, you probably don?t think of coffee as problematic in terms of cholesterol. But studies suggest otherwise. ?Coffee beans contain oils that are shown to increase cholesterol,? Leavey says. ?These oils are sifted out if you drink filtered coffee, but not in a French press.? The next time you order an unfiltered brew, check out the surface of your cup ? you?ll see globules of fat floating on top.

Life is too short to wake up in the morning with regrets, so love the people who treat you right.
Pray for the ones who don’t. Life is ten percent what you make it and ninety percent how you take it!