He’ll definitely want to make sure he doesn’t swim too close to the edge. This man is the first lap swimmer in the world to enjoy such a view – 55 stories over the city of Singapore. The £4billion Marina Bay Sands tourism development opened in the city yesterday, and the 150-metre long pool – three times the length of an Olympic swimming pool – was a highlight.

Don’t look down: A guest swims in the infinity pool of the Skypark that tops the Marina Bay Sands hotel towers – 55 stories over the city of Singapore yesterday 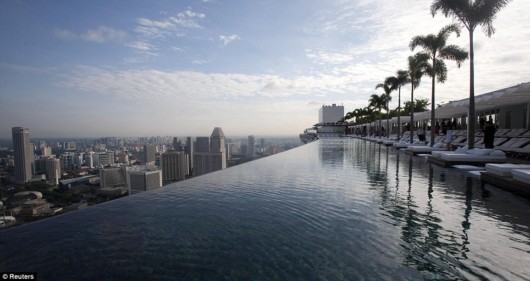 To infinity… and beyond! The pool stretches 150 metres, three times the length of an Olympic swimming pool

The view over the side: An artist’s impression shows the Skypark that tops the Marina Bay Sands hotel towers, including the infinity pool.

Infinity pools are designed to make it seem as though the water extends to the horizon. In reality, the edge of the pool is usually about an inch below the water level. The water therefore spills over the edge into a catchment below, and is then pumped back into the pool.

The concept is said to have been inspired by the terraced rice paddies in Bali, Indonesia.
They are often seen in luxury resorts such as the Marina Bay Sands.
‘In Singapore, Marina Bay Sands will be the pivot point in which tourism here is going to explode,’ gaming tycoon Sheldon Adelson, chairman of Las Vegas Sands Corp, the parent company of the resort, said at its opening celebration yesterday.

The resort from across the bay. The three towers were based on a deck of cards, according to designer Moshe Safdie 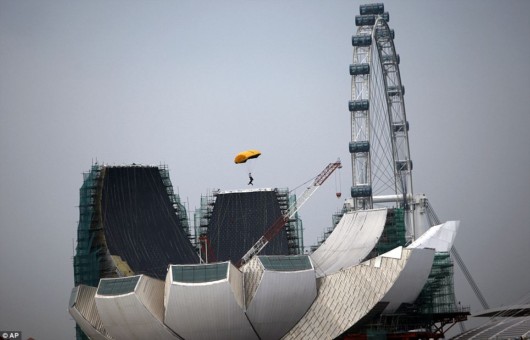 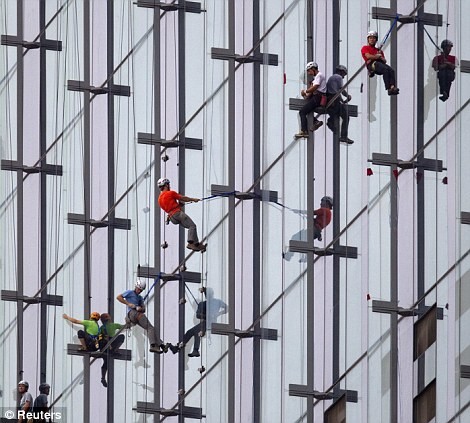 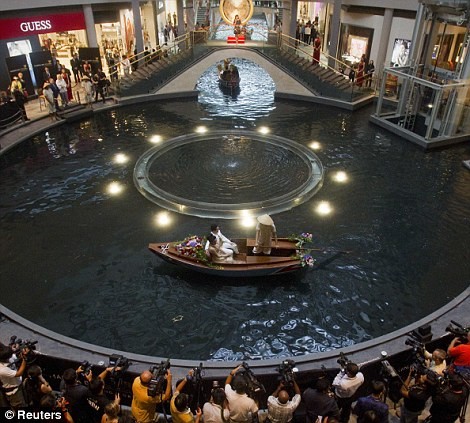 Extreme: Left, relay teams scale one of the towers in a race commemorating the opening yesterday. Right, a newly-wed couple enjoy a canal ride inside the resort’s shopping centre

The enormous hotel, which dominates the Singapore skyline, has 2,560 rooms and suites, a fleet of celebrity chef restaurants, shopping areas, theatres, a museum, a casino and a crystal pavilion.
The resort is set to employ 10,000 people directly and generate up to £48million each year. Entrance to the casino alone is nearly £50 a day – but an average of 25,000 people have visited the casino daily since its initial phased opening two months ago.
Thomas Arasi, president and chief executive officer of the resort, said he expects to attract an astonishing 70,000 visitors a day, 18 million a year.
The resort was designed by Moshe Safdie, who said he based it on a deck of cards. 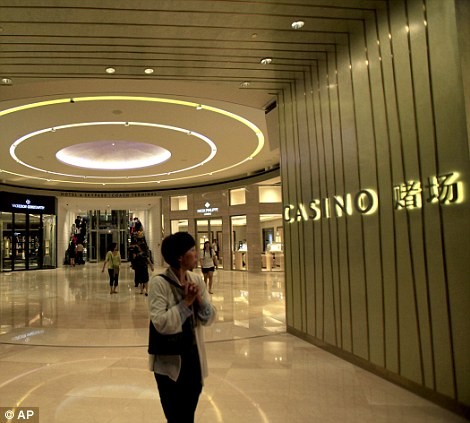 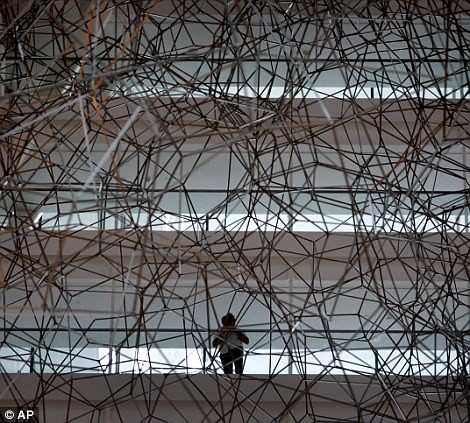 Money-maker: Left, the entrance to the casino, which costs nearly £50 to get in and is attracting 25,000 visitors each day. Right, a man looks through a steel web art structure in one of the towers

It was due to open in 2009, but was delayed thanks to labour and material shortages, and funding problems due to the global financial crisis.
Last night, singing legend Diana Ross performed for 2,500 VIPs in the resort’s Grand Ballroom. Singer Kelly Rowland also headlined an outdoor concert there yesterday.
The opening celebrations also featured a death-defying relay. Seven teams of three participants each scaled the three towers in succession before sprinting across the 340-metre long Sands SkyPark, where the infinity pool is located, to the finish line.

Just enjoying the sun: Models pose in the pool for journalists at the grand opening yesterday