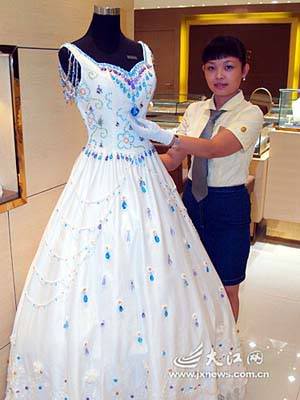 A saleswoman shows a wedding dress bearing 9,999 karats of gems at a jewelry store in Shangrao in eastern China?s Jiangxi province 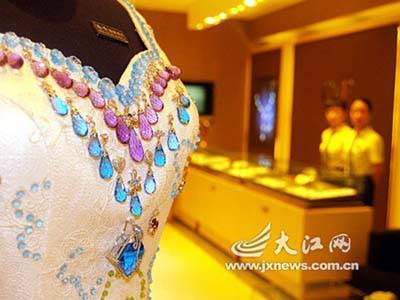 BEIJING, Oct. 16 ? If you think bejeweled wedding dresses are not enough to be an eye-opener, how about a wedding dress bearing 9,999 karats, or about two kilograms of gems?

Such a dress has been put on sale on Monday at a jewelry store in Shangrao in eastern China?s Jiangxi province.

A report says it is a work by a well-known Hong Kong jewelry designer.

The sky-high price has raised many eyebrows. Admirers said the dress was astonishingly beautiful, but they thought no one would make the bold purchase.