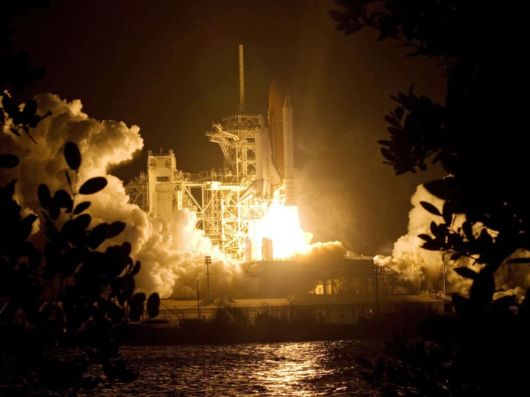 Blazing light surrounds Launch Pad 39A and glows in the nearby water as space shuttle Endeavour leaps into the sky on the STS-126 mission from NASA’s Kennedy Space Center in Florida. STS-126 is the 124th space shuttle flight and the 27th flight to the International Space Station. The mission will feature four spacewalks and work that will prepare the space station to house six crew members for long-duration missions. 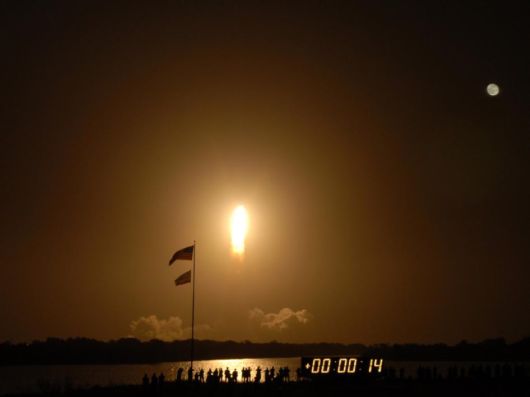 Blazing light surrounds space shuttle Endeavour, eclipsing the light from the nearby full moon, as it roars into space from Launch Pad 39A at NASA’s Kennedy Space Center during the launch of the STS-126 mission. Liftoff was on time at 7:55 p.m. EST on Friday, Nov. 14, 2008. STS-126 is the 124th space shuttle flight and the 27th flight to the International Space Station. The mission will feature four spacewalks and work that will prepare the space station to house six crew members for long-duration missions. 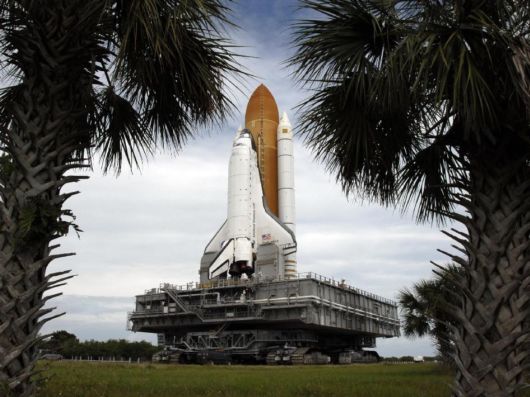 Endeavour is scheduled to launch on the STS-126 mission, the 27th mission to the International Space Station on Friday, Nov.. 14, 2008. The shuttle will carry the Lightweight Multi-Purpose Experiment Support Structure Carrier and the Multi-Purpose Logistics Module Leonardo, which will hold supplies and equipment, including additional crew quarters, spare hardware and equipment for the regenerative life support system. 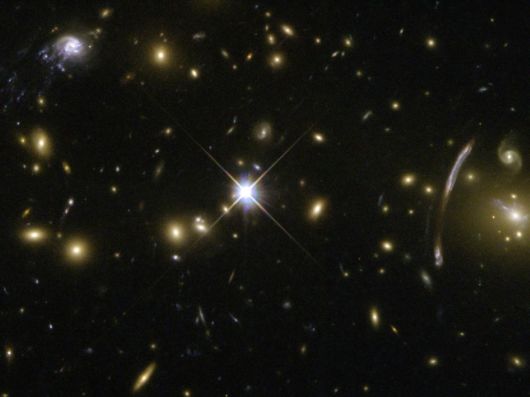 To start, most of the yellowish objects in the above image from the Hubble Space Telescope are galactic members of a massive cluster of galaxies known as Abell 2667. The distortion of the galaxy on the upper left is real.. As the galaxy plows through the intercluster medium, gas is stripped out and condenses to form bright new knots of stars. This detailed image helps astronomers understand why so many galaxies today have so little gas.

The distortion of the galaxy on the far right, however, is an illusion. This nearly normal galaxy is actually far behind the massive galaxy cluster.. Light from this galaxy is gravitationally lensed by Abell 2667, appearing much like a distant person would appear through a wine glass. Each distorted galaxy gives scientists important clues about how galaxies and clusters of galaxies evolve.

Neither Perpendicular nor Parallel 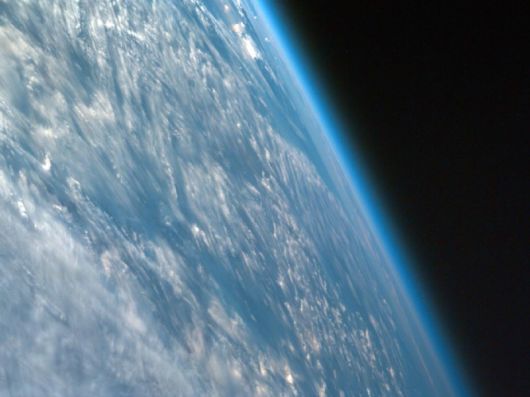 Most ISS images are nadir, in which the center point of the image is directly beneath the lens of the camera, but this one is not. This highly oblique image of northwestern African captures the curvature of the Earth and shows its atmosphere.

The Earth’s atmosphere is composed of 78 percent nitrogen, 21 percent oxygen and 1 percent other constituents, and it shields us from nearly all harmful radiation coming from the sun and other stars. It also protects us from meteors, most of which burn up before they can strike the planet. Affected by changes in solar activity, the upper atmosphere contributes to weather and climate on Earth. 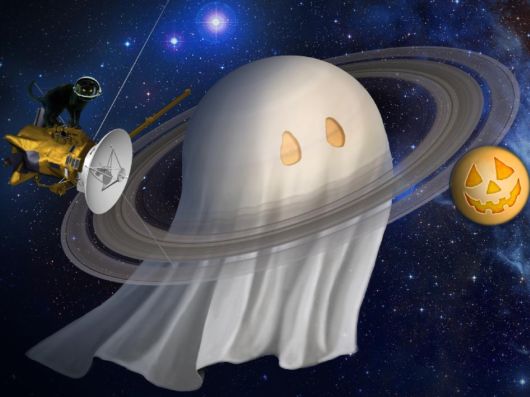 As the new Equinox mission at Saturn begins, the Cassini-Huygens mission team sends their best wishes for a happy, healthy and fun Halloween. We’ve enjoyed sharing the stunning images and exciting results of Cassini’s first four years at Saturn — and promise many more treats as the adventure continues.

The Cassini program is an international cooperative effort involving NASA, the European Space Agency and the Italian space agency, Agenzia Spaziale Italiana. In the United States, the mission is managed by the Jet Propulsion Laboratory. 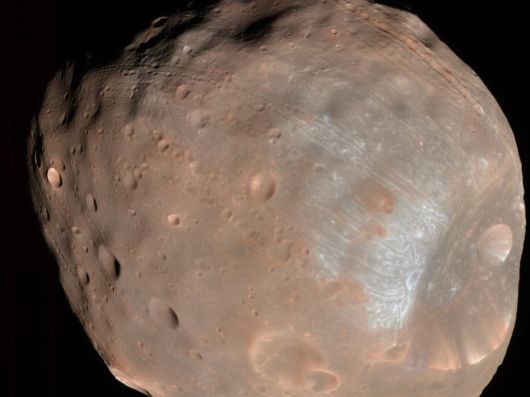 This moon is doomed. Mars, named for the Roman god of war, has two tiny moons–Phobos and Deimos–whose names are derived from the Greek for fear and panic. These Martian moons may well be captured asteroids originating in the main asteroid belt between Mars and Jupiter or perhaps from even more distant reaches of the solar system.

The larger moon, Phobos, is a cratered, asteroid-like object in this stunning color image from the Mars Reconnaissance Orbiter. Phobos orbits so close to Mars that gravitational tidal forces are dragging it down. In 100 million years or so, Phobos likely will be shattered by stress caused by the relentless tidal forces, the debris forming a decaying ring around Mars. 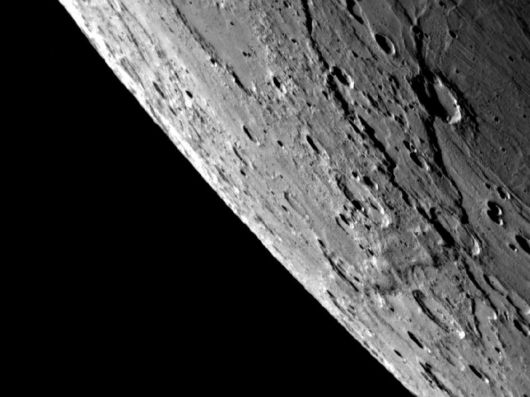 About 58 minutes before MESSENGER’s closest approach to Mercury on Oct. 6, 2008, its Narrow Angle Camera captured this close-up image.

The features in the foreground, near the right side of the image, are close to the terminator, the line between the sunlit dayside and dark night side of the planet, making the shadows long and prominent. Two very long scarps, or cliffs, are visible in this region, and the scarps appear to crosscut each other. The easternmost scarp also cuts through a crater, showing that it formed after the impact that created the crater. 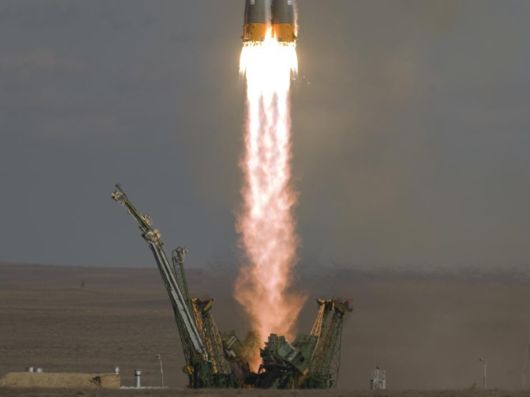 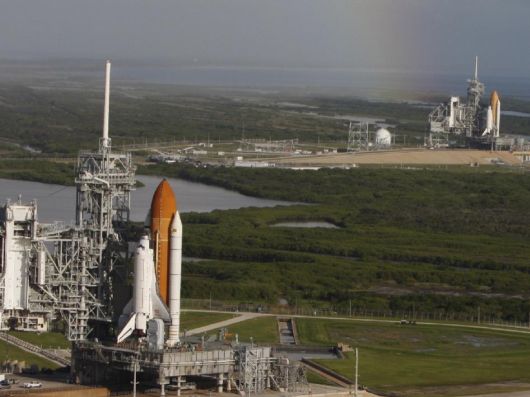 For the first time since July 2001, two shuttles are on the launch pads at the same time. Endeavour will stand by at pad B in the unlikely event that a rescue mission is necessary during Atlantis’ upcoming STS-125 mission to repair NASA’s Hubble Space Telescope. The missions is slated to launch Oct. 10.

After Endeavour is cleared from its duty as a rescue spacecraft, it will be moved to Launch Pad 39A for its STS-126 mission to the International Space Station. That flight is targeted for launch Nov. 12.

Phoenix Provides a Panorama of Mars 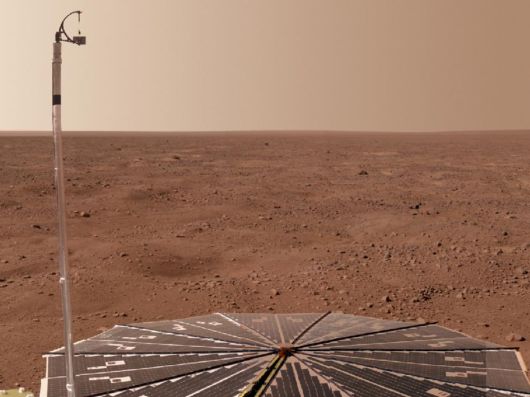 Combining more than 400 images taken during the first weeks after the Phoenix arrived on the Red planet’s arctic plain gave scientists this view of Mars.

The full-circle panorama in approximately true color shows the polygonal patterning of ground at the landing area, similar to patterns in permafrost areas on Earth. The center of the image is the westward part of the scene. Trenches where Phoenix’s robotic arm has been exposing subsurface material are visible in the right half of the image. The spacecraft’s meteorology mast, topped by the telltale wind gauge, extends into the sky portion of the panorama.
This view comprises more than 100 different camera pointings, with images taken through three different filters at each pointing.

Morning Frost on the Surface of Mars 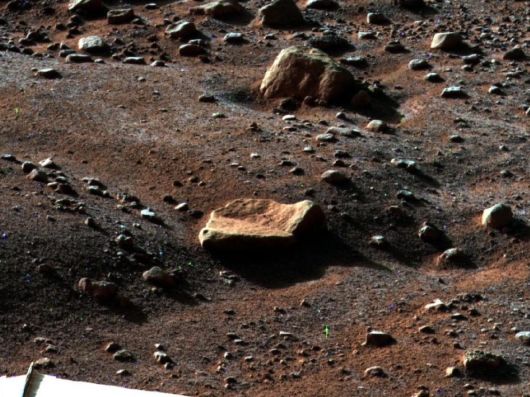 A thin layer of water frost is visible on the ground around NASA’s Phoenix Mars Lander in this image taken by the Surface Stereo Imager at 6 a.m. on Sol 79 (August 14, 2008), the 79th Martian day after landing. The frost began to disappear shortly after 6 a.m. as the sun rose on the Phoenix landing site.

The sun was about 22 degrees above the horizon when the image was taken, enhancing the detail of the polygons, troughs and rocks around the landing site.

This view looks east-southeast with the lander’s eastern solar panel visible in the bottom left-hand corner of the image.

This false color image has been enhanced to show color variations.