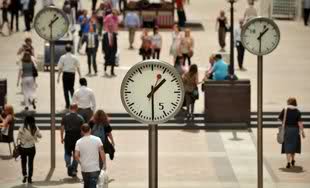 Everyone knows what a leap year is, but did you know there are also leap seconds?

At least for now, because the leap seconds very existence was debated in Geneva Yesterday:

with Britain, China and Canada fighting to keep it against the USA, Germany and France.

Introduced globally 40 years ago, the leap second was designed to keep atomic time

(used by computer systems) and astronomical or solar time (the Earths rotation) in sync with each other.

Atomic time, which GPS and telecommunications depend on,

is so accurate that it gains or loses no more than a second every million years.

However, astronomical time alters because of variations in the Earth rotation and can be affected

by things like earthquakes. The leap second was needed to keep the two time scales coordinated

so atomic time doesn’t jump ahead of astronomical time, the International Telecommunication

In fact, a leap second has been added at irregular intervals ? a total of 24 times since

Without the leap second keeping time in check, it is predicted that the difference between

atomic time and astronomical time will increase at a rate of approximately one second per year ?

meaning that in 550 years, the difference between atomic time and astronomical time will be

about an hour, the International Bureau of Weights and Measures (BIPM) projects.

elimination of the leap second and voting for or against the controversial proposal.

ITU-R World Radiocommunication Conference due to take place next week.

The next leap second is expected to be added at midnight on 30 June. However,

Thursday debate, which an ITU-R spokesperson described as very polarised could see all that change.

Against the leap second

Countries like France, Italy, Germany and the USA are calling for an end to the leap second

adjusted by a whole second to keep in sync with the change every year or two.

This adaptation of a second, critics argue, leaves systems open to the risk of error.

If the leap second was abolished, time would be more standard.

The ITU-R, a United Nations agency, said in a statement:

and computerised systems to operate with and eliminate the need for specialised ad hoc time systems.

For the leap second

Britain, China and Canada are opposed to the change because without that leap second,

atomic and astronomical time will drift further apart, which would need to be corrected by

adding a single leap second, minute or hour at an agreed point in time which would be

even more technically challenging and costly.

and our own experiences of day and night, added the ITU-R spokeswoman