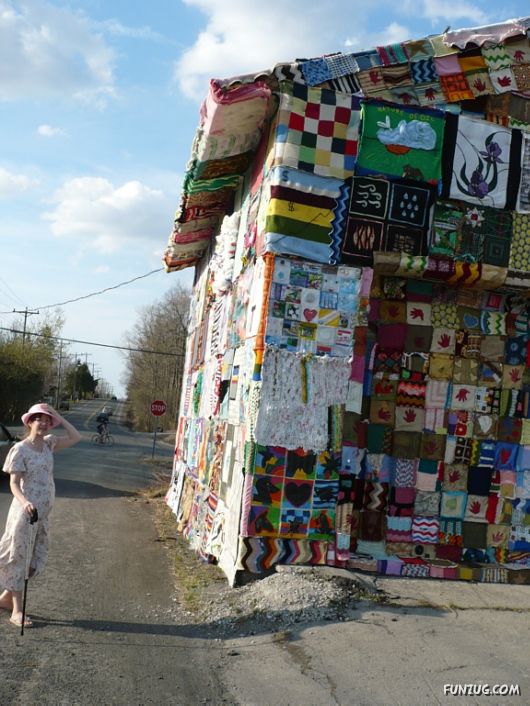 The International Fiber Collaborative came into being in Syracuse, NY when an Art major by the name of Jennifer Marsh decided to go to the great outdoors with her art projects. She is a major in sculpture but also enjoys working with fibers. My job was to sew the submitted panels that came in onto a canvas backer so that the weight would not cause the exhibits to sag or come apart when in the elements of the weather. Every day was another suprise to see what would arrive in the mail. Anyone could submit an artpiece and it didnt matter if you were an art major or crafter or just a student. In fact many of the small one foot panels on the peak were made by local elementary children. Others came from India, Morocco and England or Spain! As the news traveled around in the arts and crafts world, more people wanted to make something to add to the wall. 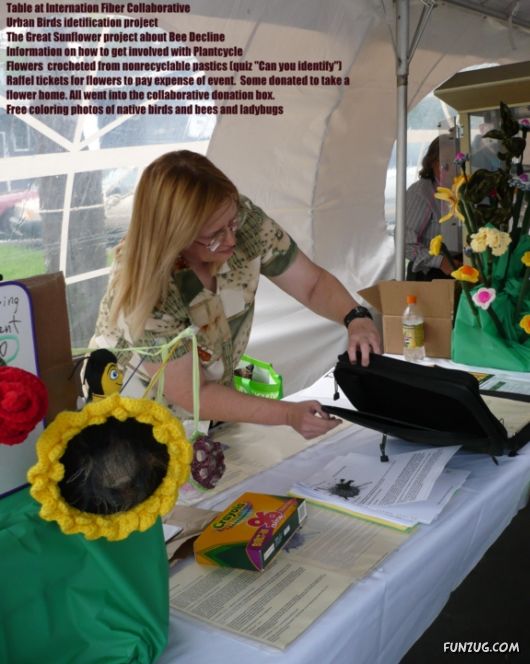 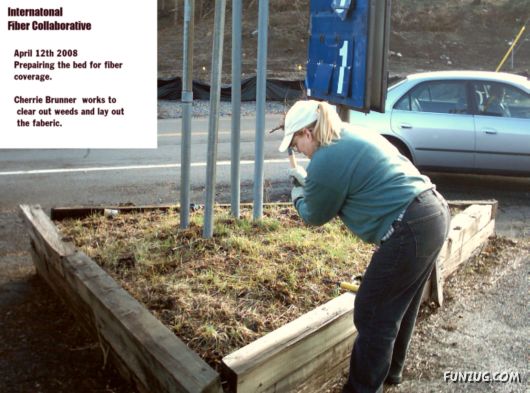 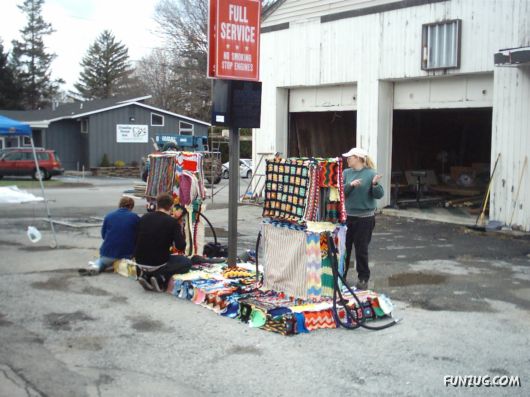 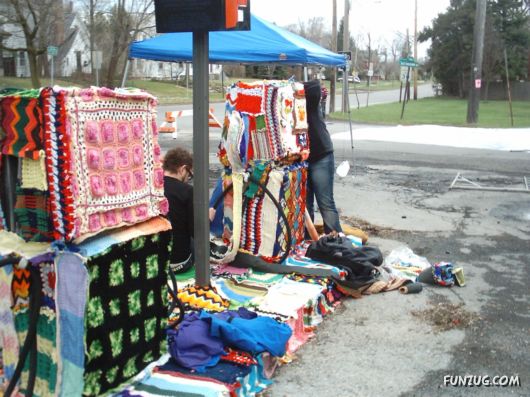 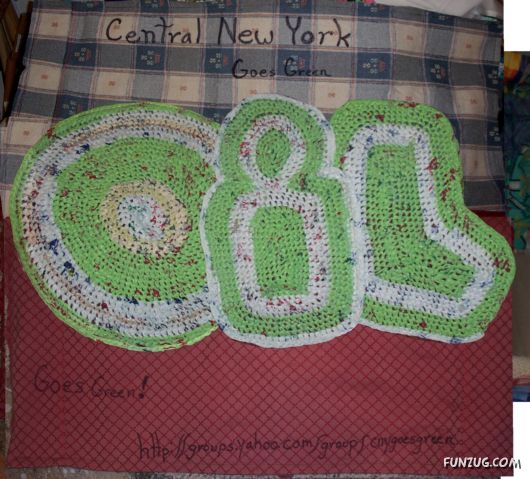 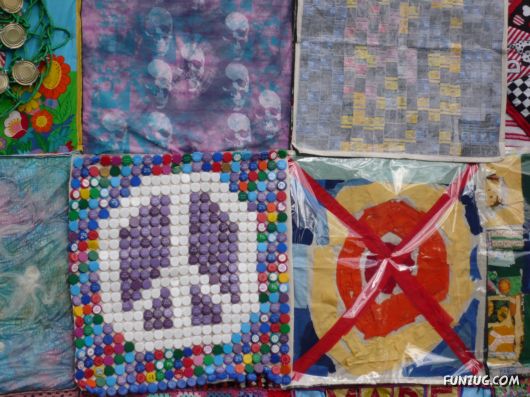 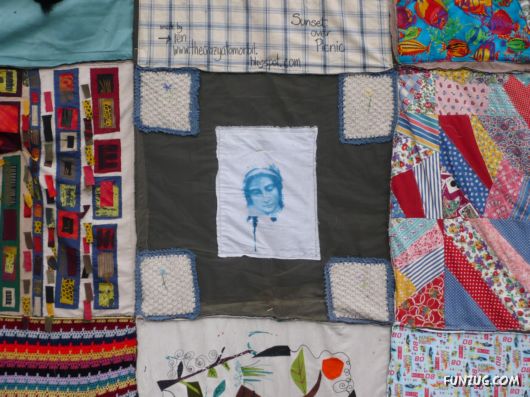 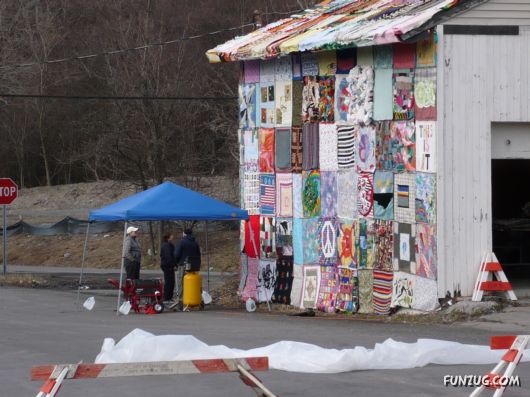 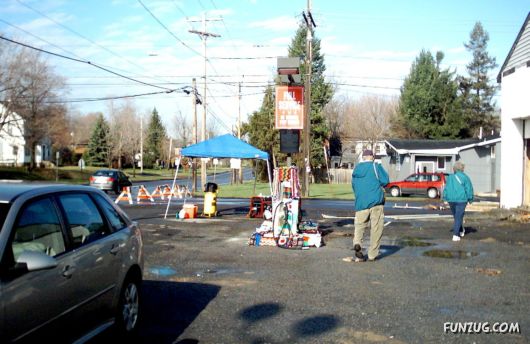 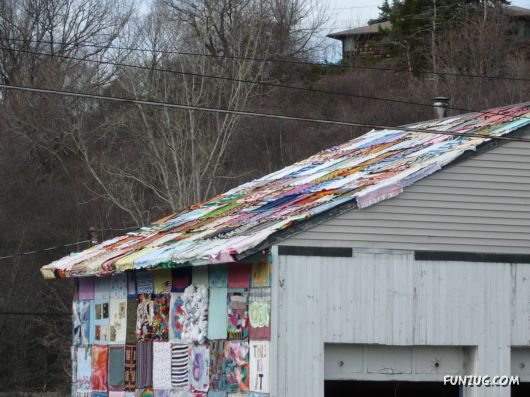 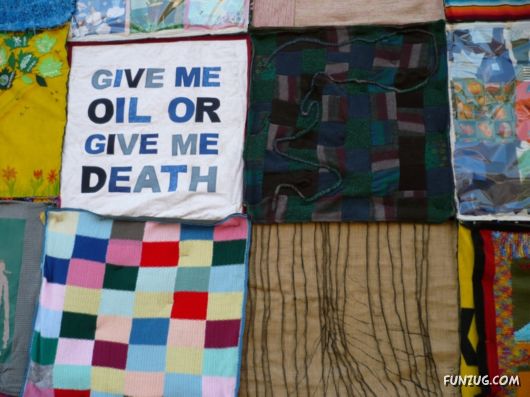 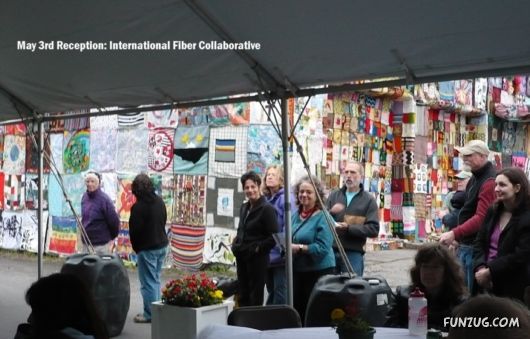 I was suprised at the nay sayers of trying to attempt such a project, but I just wave them off and say..don’t listen! You got a great idea here! I was not able to help with applying the panels to the walls but I helped in anyway possible including handing out fliers, and getting my group to participate in a panel. We made one that said "OIL" crochet out of green and white grocery bags with a group called Central NewYork Goes Green, Then my Crafters group decided to get together and make the "Oil Drop in Water" that was put on the front right next to the one that says "No Petrol products are in this Square" (Craftcycle) One of the other members Diane made "The Nature of Oil" and she is shown in the picture (girl in dress) looking up at her artwork. Dozens of people showed up every day to take photos and ask questions. My other job I did was to put fabric over the triangular planter put around the gas station sign and the pipes. I laid out a mat with lots of color and intended on "planting" the flowers I crochet out of non-recyclable plastic using acrylic yarn. It was cloudy and did rain a bit the day of the event so I kept the blooms in the tent and people made some donations to be able to take a flower home with them. All money went to pay for the cost of erecting and insuring the piece. I handed out information about recycling, pictures to color of birds, bees and bugs and the importance of them to our food supply, as well as free bird watching kits from Cornell. The reception was May 3rd on a Saturday. People kept coming to see for hours and hours. It was a great time. The news crews at first were not sure till they saw the huge crowd it was generating and they plus the newspapers all showed up to ask questions and where it would go from here. I was tickeled to be a part of the experience. Cher
10000009 Gas pumps were covered first and were premade to slip over the top. Every part of the building was covered in fabric. Windows doors and roof!

14 panel made with some unusual bottle caps. A teenage boy worked on the peace symbol and sent it to be added. Another to the right is made from the plastic covers from a brand of tea that uses them, and skulls printed on the fabric above was batik by an artist.
16 – "Made from Oil" the material itself is an oil based product. There was a panel submitted that was crochet out of video cassette tape, but it was left on a display table before an event out of town and it was stolen off the table. Irish roses were crochet out of the VCR tape.
19 Its me in the baseball cap watching as the first side was being completed
20 The roof went on next using a cherry picker bucket and compressor guns to nail the work to the sides of the building.
25 "It allcomes down to (money) fabric dollars stitched on the piece
27 Crochet plastic design in one piece
28 Behind the gas station the upper wall. This station sat on a small triangle of pavement were three roads converged. Yet the building has never been hit by a car. But it has been sitting empty for several years now.
32 Garden collage done by me. Sides covered with material picked out to fit the panels that were cut out on the canvas. Everything including shower curtain, plastic table cloths, toilet seat cover (curley green) and more crochet colored plastic garbage bags in blues and reds and browns. The crochet ropes added were made by a class who was given the yarn and asked to make something for the project. I added it to the rim and some was added to some of the panels.
39 "No petrol products are in this square.. The creator wanted to make sure only natural materials went into the piece. The hardest piece to sew was the plastic waste strips crochet into a panel that ended up being 2inched thick! We finally gave up and just stapled it to the panel.
40 Closeup of "Oil drop in water" all made of scrap acrylic yarn and grey yarn for the oil spot. I raised it in relief with plastic grocery bags and a wire rim from an old lamp shade. No new material was used to create the piece.
41 Close up of other side of front
43 International panels
44 Nature of Oil
45 Under eve shot where the door of the building used to be.
46 fuzzy closeup of various types of yarn in one square
47 Oily duck (upside down) Sunset begins to fall onthe building
48 "OIL" Central NYGoesGreen
49 "This is IT"
50 Full left side with spectators looking and wondering what it all is?
51 Backside
52 Closeup of the back
53 Closeup of Oil Drop
54 Even the eves are covered with crochet and knitted items
55 almost done
98 No Mo Oil
99 Front of Gas Station
100 Diane looking toward the piece
101 Diane looking forward after seeing her work on the wall for the first time
103-105 Back side of the garage
106 Back Corner of Garage
107 Notice the sweater arm with a glove stitched to it. It was left to hang free.
108 Give me oil or give me Death
109 Treat people like…
112 Kiosk explaining the project

Article by local newspaper. Check out the Video at Syracuse
Source: CRAFTCYCLE GROUP