The spring equinox was March 20 this year, determined by the changing sunlight and how the earth is tilted and orbits the sun. But we don’t need to look to the skies to know the seasons are turning. All we have to do is glance more earthbound to find flashes of color and bursts of life. Flowers are appearing in all kinds of places since the equinox. — Lloyd Young 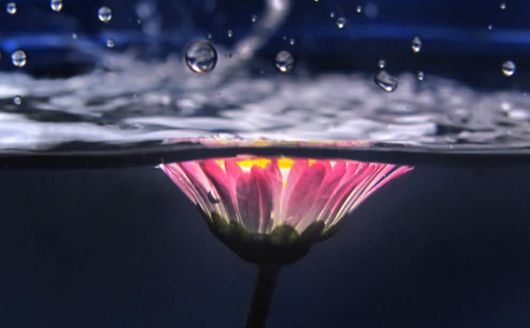 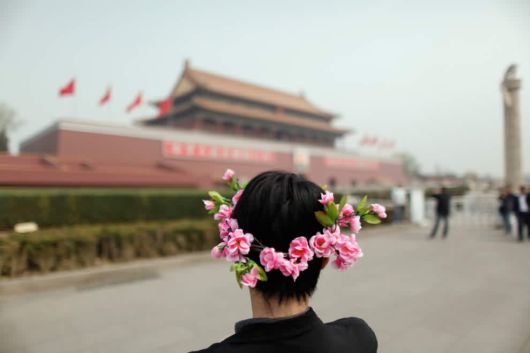 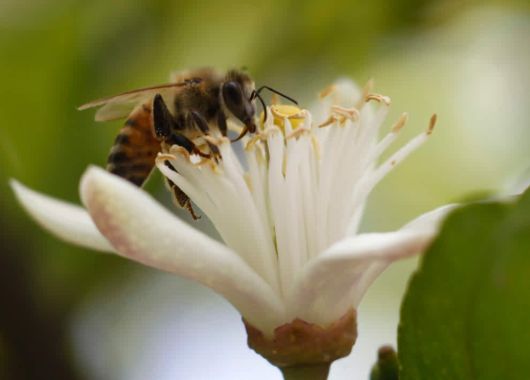 A bee collects pollen from a lemon blossom in a public park in Amman, Jordan March 31. (Ali Jarekji/Reuters) 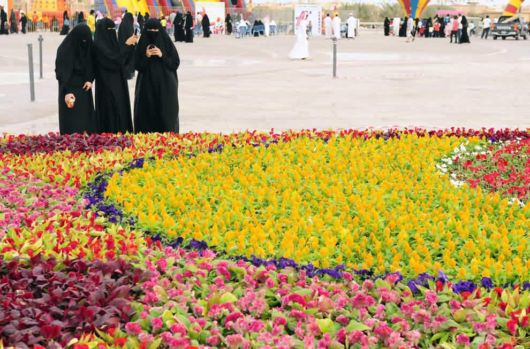 A group of women take photos of flowers at King Abdullah Park during the Rabih Festival in Dammam, Saudi Arabia April 1. (Zaki Ghawas/Reuters) 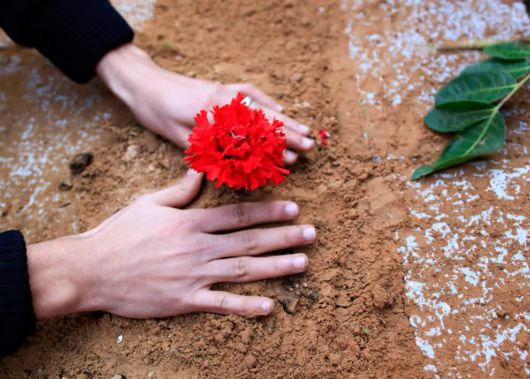 A Libyan mourner places a flower at the funeral of the people who were killed after air strikes by coalition forces at the martyrs’ cemetery in Tripoli March 24. (Ahmed Jadallah/Reuters)

A lone flower is propped up by a boot at a shoe installation marking International Day for Landmine Awareness at Simon Bolivar Square in Bogota, Colombia April 4. On each of the more than 9,000 shoes is the name of a land mine victim representing those injured in Colombia. Colombia is second to Afghanistan as the nation with the largest number of victims. (Fernando Vergara/Associated Press) 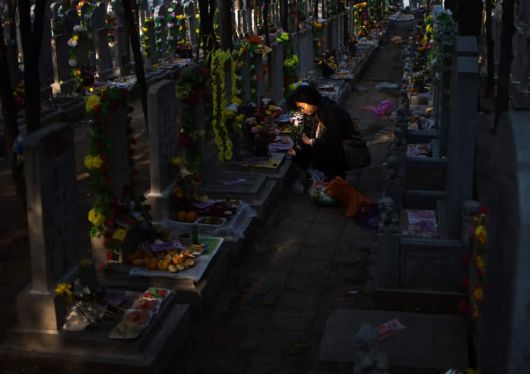 A woman places flowers on the tomb of her deceased family member at a cemetery during the Qingming Festival in Beijing, China April 5. Qingming festival, also known as the Grave Sweeping Day is when Chinese around the world remember their dearly departed and take time off to clean the tombs and place flowers and offerings. (Andy Wong/Associated Press) 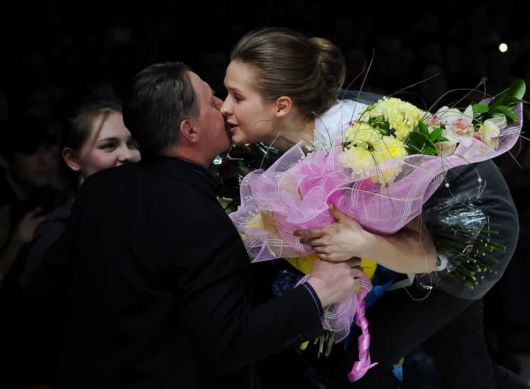 Russian fashion designer Antonina Shapovalova receives flowers at the end of the presentation of her collection during the Fashion week in Moscow on April 2. (Natalia Kolesnilova/AFP/Getty Images) 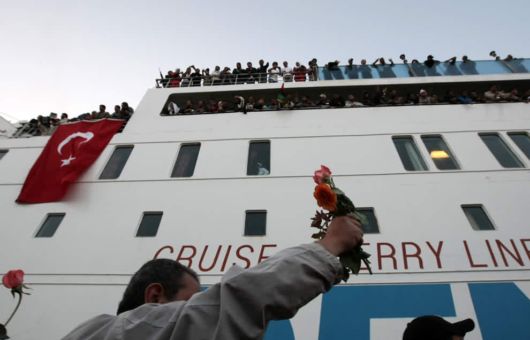 Libyans hold up flowers to welcome a Turkish ship arriving from Misrata to the port of Benghazi to evacuate the wounded on April 3. The Turkish vessel is taking hundreds of people wounded in the Libyan uprising for treatment in Turkey from the two cities of Misrata and Benghazi. (Mahmud Hams/AFP/Getty Images) 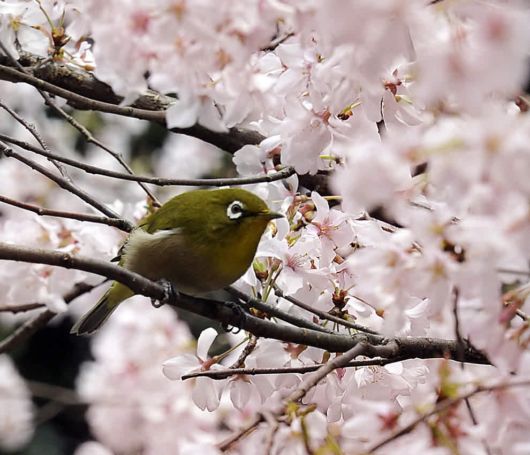 A bird sits on the branch of a cherry tree surrounded by pink blossoms at Tokyo’s Ueno Park on April 2. Cherry blossoms, symbols of the fleeting nature of life, are blooming in Tokyo but many of the usual boisterous parties will be cancelled as Japan deals with the recent earthquake, tsunami and nuclear disasters. (Yoshhikazu Tsuno/AFP/Getty Images) 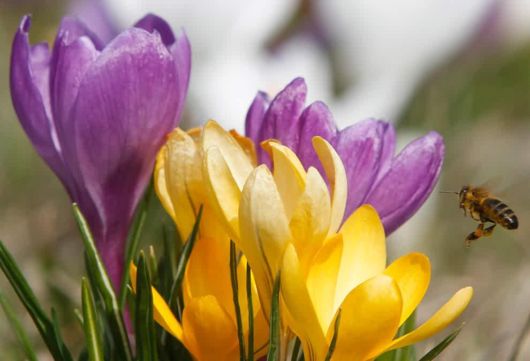 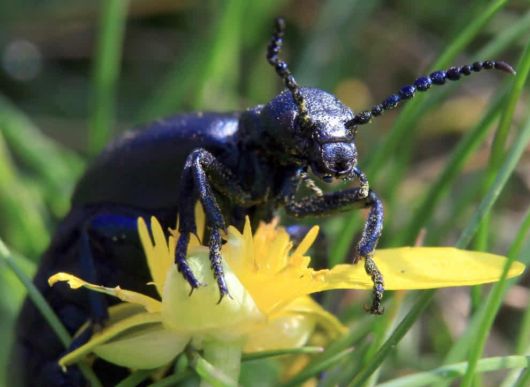 A oil beetle feeds on a flower close to the coastal path during the first ever nationwide survey to map the location of the threatened and creatures on March 24 near Plymouth, England. Often found on the coast, and particularly in the south west of England, the number of oil beetle species found in the UK has halved in the last 100 years and the survey will help establish the whereabouts of the remaining four species and boost efforts to secure their future. The survey is being launched today by Buglife: The Invertebrate Trust and the National Trust in partnership with Natural England and Oxford University Museum of Natural History. ( Matt Cardy/Getty Images) 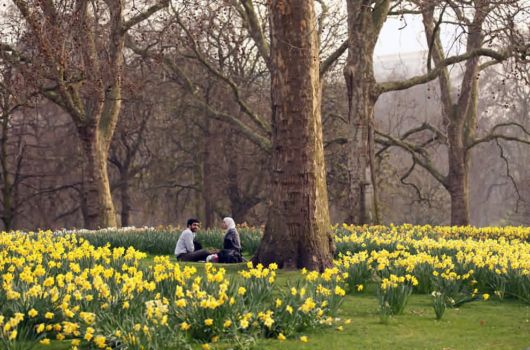 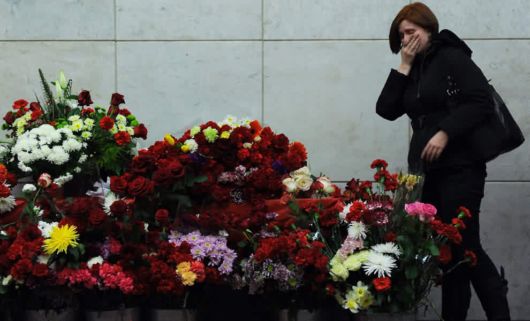 A woman reacts as she looks at the flowers laid in memory of the victims of the March 29, 2010 terrorist bomb blast at the site of the attack in the Lubyanka metro station in Moscow. Russia this March marked one year since the metro bombings, when 40 people were killed and dozens wounded by two female suicide bombers during the morning rush hour. ( Natalia Kolesnikova/AFP/Getty Images) 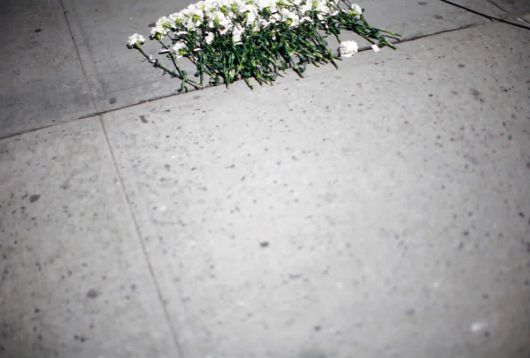 Flowers are seen at the site of the Triangle Shirtwaist Factory fire in New York City March 25. The ceremony marked the 100 year anniversary of the fire which killed 146 immigrant workers, most of them young women. Workers were locked into the factory during their shifts, preventing escape. New Yorkers watched in horror from below as workers leapt to their deaths from the windows above. Public outcry over the tragedy led to nationwide debate on workers rights and safety regulations and helped pave the way for strong workers unions. (Eric Thayer/Getty Images) 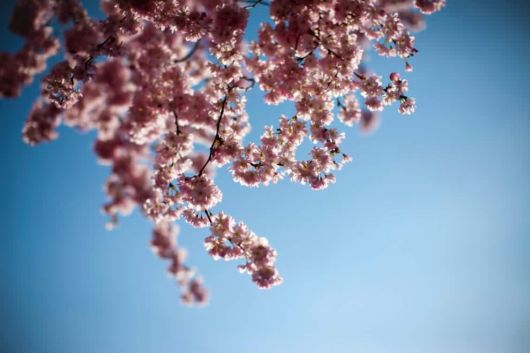 A cherry tree blossoms in front of the Japanese Cultural Institute in Cologne, western Germany on March 22. (Rolf Vennenbernd/AFP/Getty Images 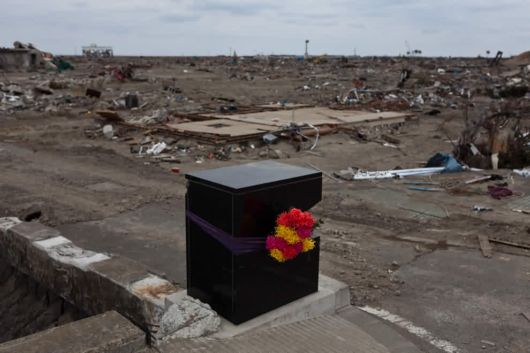 Flowers are tied to a stone momument on a bridge in the quake and tsunami-devastated Yuriage district of Natori, Miyagi prefecture, on March 25. Two weeks after a giant quake struck and sent a massive tsunami crashing into the Pacific coast, the death toll from Japan’s worst post-war disaster topped 10,000 and there was little hope for 17,500 others still missing. At least 600 of the dead hail from the Yuriage district of Natori. (Yasuyoshi Chiba/AFP/Getty Images)

Bouquets and wreaths of flowers are displayed on the steps of the Monaco cathedral, before the funeral of Princess Antoinette, late Prince Rainier’s sister of Monaco March 24. Princess Antoinette March 18 in Monaco. (Lionel Cironneau/Pool photo/Associated Press) 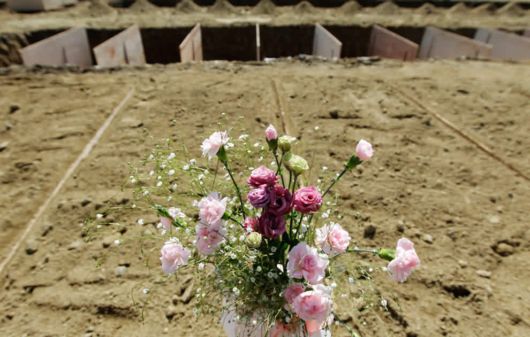 A bouquet of flowers at a temporary mass grave site for victims of the earthquake and tsunami in Higashi-Matsushima, in Miyagi prefecture, northern Japan March 24. (Yuriko Nakao/Reuters) 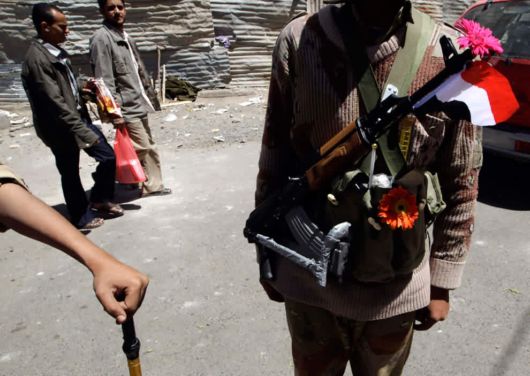 A Yemeni army soldier, with flowers received from protesters, stands guard to protect anti-government protesters during a demonstration demanding the resignation of Yemeni President Ali Abdullah Saleh, in Sanaa March 23. Yemen opposition groups called on protesters to march on Saleh’s Sanaa palace to force him out, hoping to end a crisis his allies abroad fear will benefit Islamic militants. (Ammar Awad/Reuters) 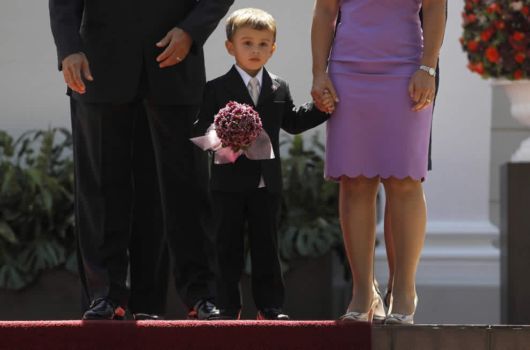 Gabriel Funes, the three-year-old son of El Salvador’s President Mauricio Funes and his wife Vanda Pignato wait with a bouquet of flowers for the arrival of US President Barack Obama and first lady Michelle Obama at the National Palace in San Salvador March 22. (Jason Reed, Reuters) 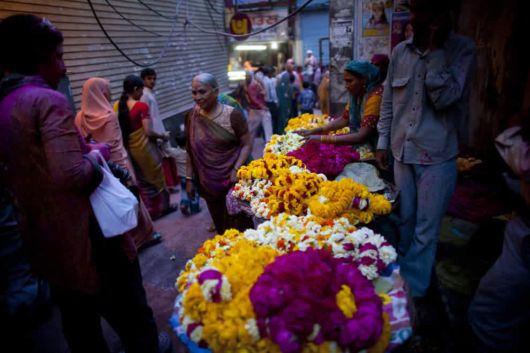 Hindus buy baskets of flower during Holi celebrations at the Bankey Bihari Temple on March 21 in Vrindavan, India. Holi, the spring festival of colours, is celebrated by Hindus around the world in an explosion of color to mark the end of the winter. 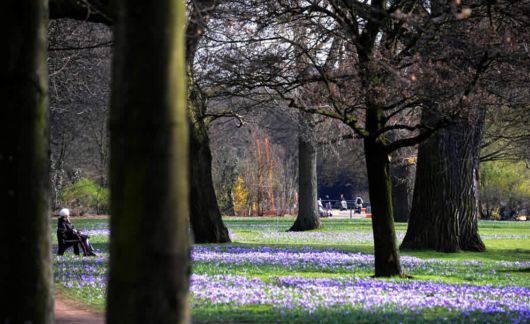 A woman sits on a bench in a park wher hundreds of crocus flowers bloom in the warm sunny weather in the western city of Duesseldorf March 21. (Patrik Stollarz/AFP/Getty Images) 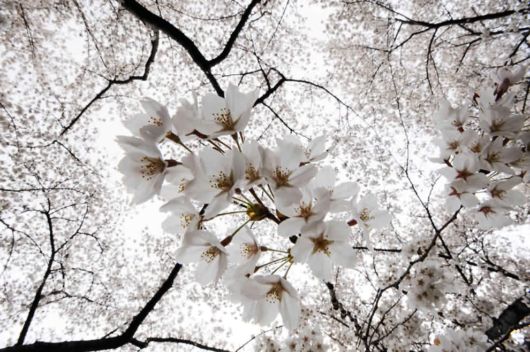 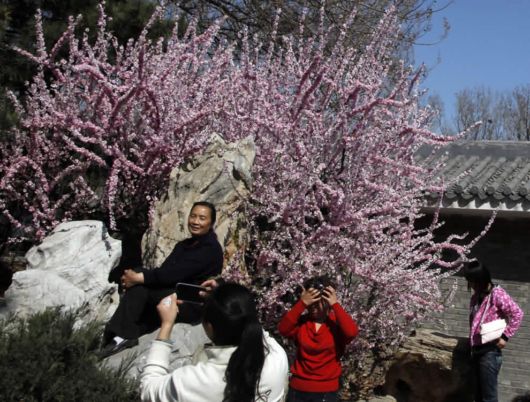 Visitors to a calligraphy stone park enjoy the good weather on the eve of Qingming, or Tomb Sweeping Day, in Beijing April 4. (Ng Han Guan/Associated Press) 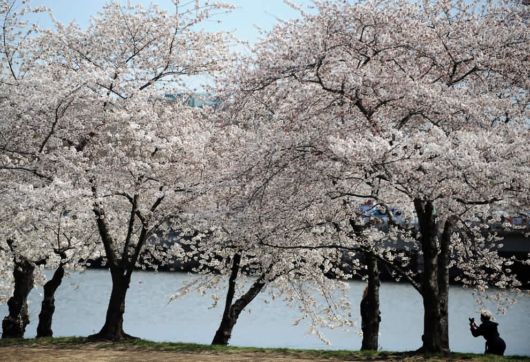 A woman takes pictures of cherry blossoms at the Tidal Basin March 29 in Washington, DC. As many as one million people are expected to stream through the Mall esplanade area during the Cherry Blossom Festival from March 26 through April 10. (Jewel Samad/AFP/Getty Images) 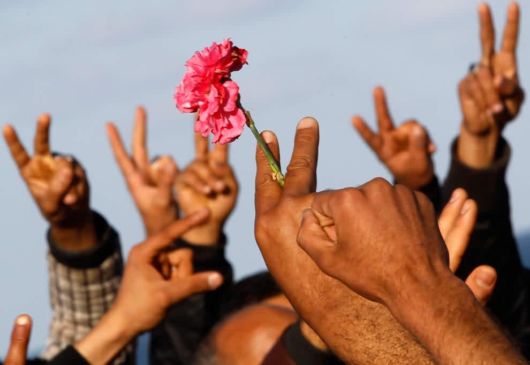 A Libyan holding a flower joins others during the funeral in Tripoli March 20 for those who were killed by coalition forces air strikes. (Ahmed Jadallah/Reuters)