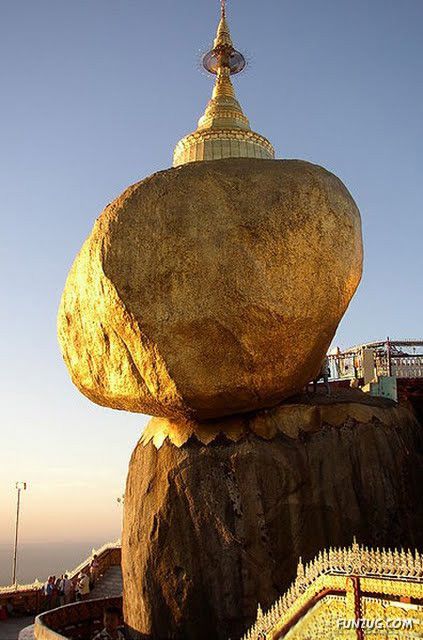 Kyaiktiyo Pagoda, also known as Golden Rock, is a famous Buddhist pilgrimage site in Mon State, Burma. A small pagoda (5.5 m – 18 ft) sits on top of the "golden rock," a granite boulder covered with gold leaves pasted on by devotees. The rock itself is precariously perched and seems to defy gravity as it perpetually appears to be on the verge of rolling down the hill. 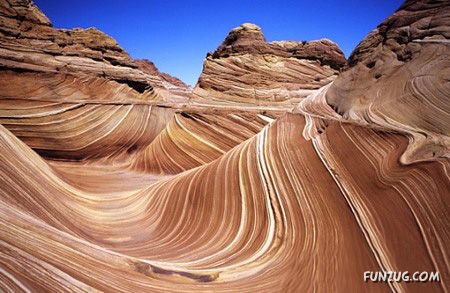 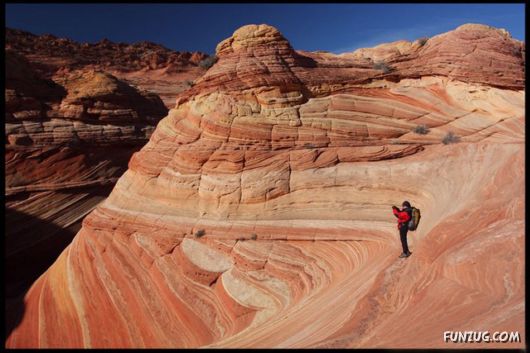 This spectacular sandstone formation called ?The Wave? is located on the slopes of the Coyote Buttes, Arizona. The formation can be reached by hiking approximately 3 miles (4.8 kilometers) across rugged, trail less landscape, making the round-trip to and from The Wave a nearly 6-mile (9.7-kilometer) hike that climbs about 350 feet (107 meters) in altitude. 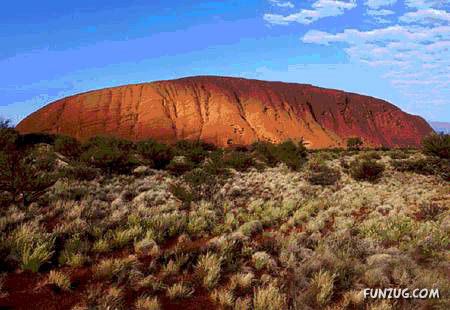 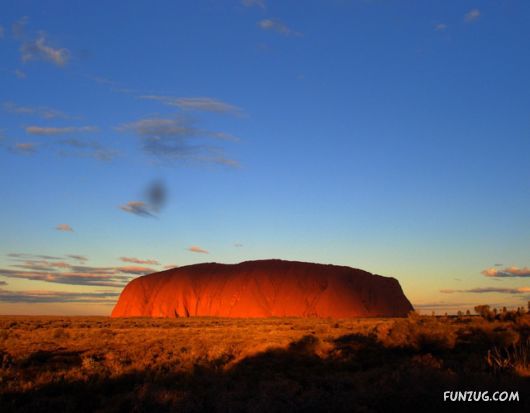 The large sandstone formation of Ayers Rock (also known as Uluru) rises 1,142 feet from the desert. Its sheer size ? with a circumference of 6 miles ? dwarfs everything around it. This iconic monolith of Australia is one of the largest in the world. From dawn to dusk, it takes on a stunning range of red to brown shades with the changing light. Ayers Rock is sacred to the Aborigines of the area, who are known as the Anangu. In recent years, Uluru has also become popular with New Age practitioners. 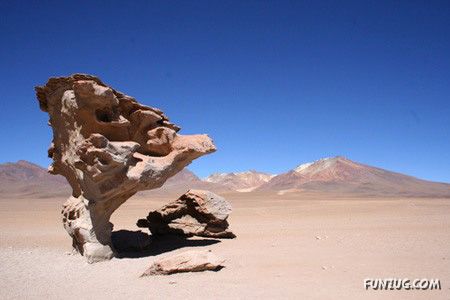 A stone sculpted by wind and sand, the "Stone Tree" is located high on the Bolivian Altiplano, one of the world’s most beautiful landscapes. 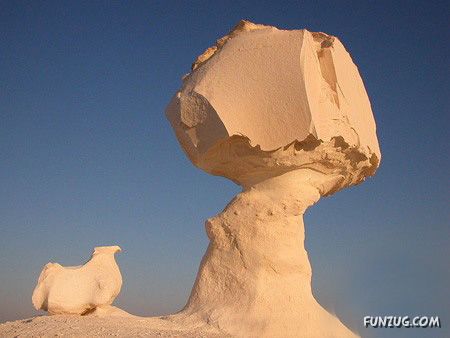 This is one of the world’s most famous mushroom rocks, located in Egypt. Also called "rock pedestals," they are one of the most striking manifestations of the processes of erosion and weathering. Usually found in desert areas, they are formed over thousands of years when erosion of an isolated rocky outcrop progresses at a different rate at its bottom than at its top. 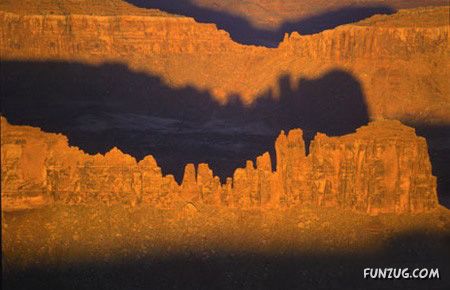 Stone vertebrae snag morning’s light along the northern tip of Utah’s Bridger Jack Mesa (foreground), leaving Lavender Canyon hidden in a cold, purple shroud. Upper layers of the mesa are composed of what geologists call Wingate sandstone, deposited about 200 million years ago when sand dunes hundreds of feet thick carpeted the region. Weird and wild rock formations abound on the 130,000-square-mile (340,000-square-kilometer) Colorado Plateau, prompting one early settler to describe it as "the roughest country you or anybody else ever seen; it’s nothing in the world but rocks and holes, hills and hollows." 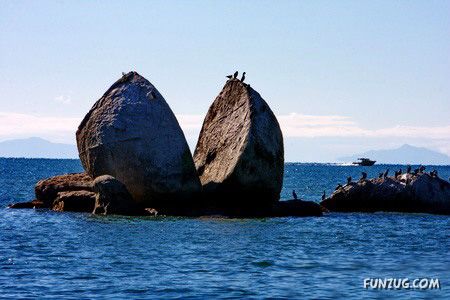 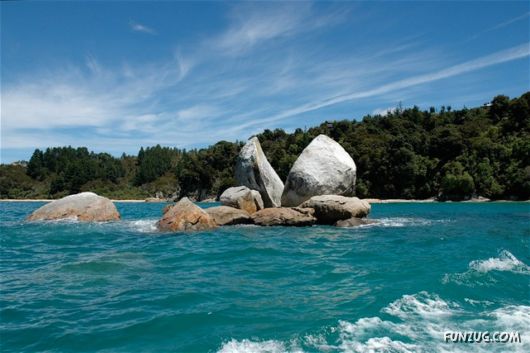 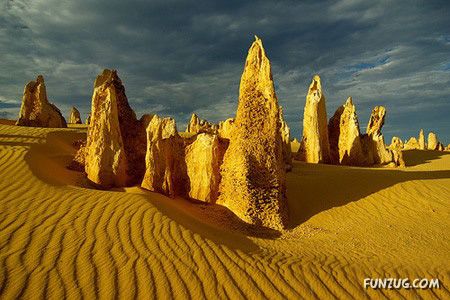 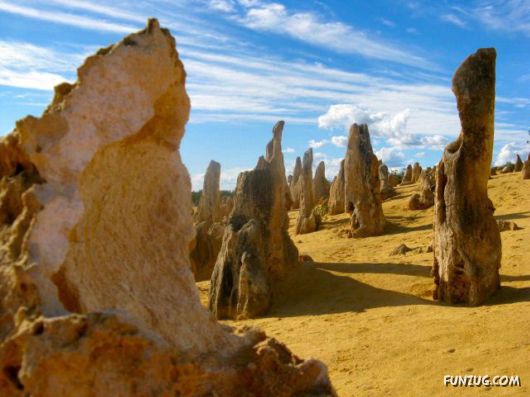 These beautiful limestone formations called The Pinnacles are contained within Namburg National Park in Western Australia. The Pinnacles were formed from lime leaching from the sand and by rain cementing the lower levels of the dune into a soft limestone. 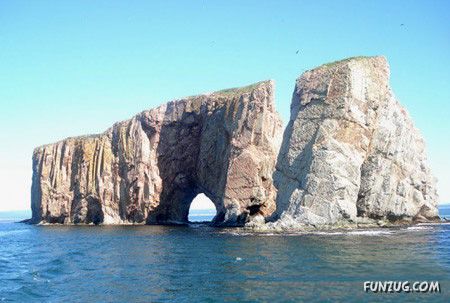 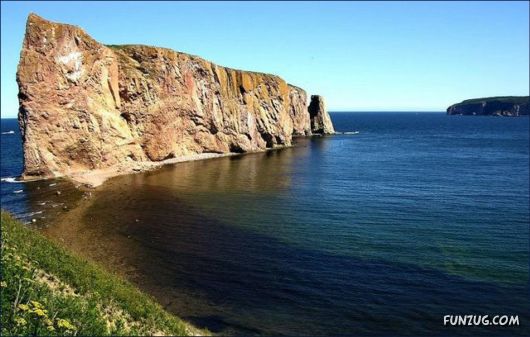 This rock formation is one of the largest natural arches in the world. The pierced rock used to have two arches until one of the outer arches collapsed in June 17, 1845. Despite the loss of one arch, the Perce Rock is still tagged one of the valued seven wonders of Canada. The rock gets its name from a large 15 meter (50 ft) high arch near its seaward end. 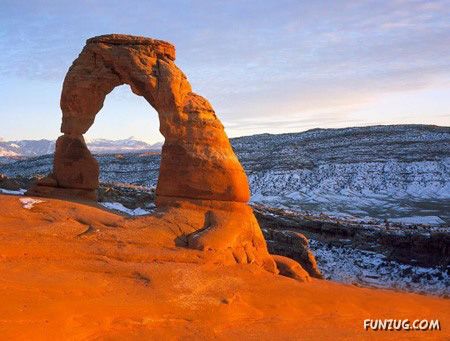 A world famous arch located in Arches National Park (Utah, USA), the Delicate Arch is a mysterious lone-standing arch that has become a symbol of the state.