A volcanic plug, also called a volcanic neck, is a volcanic landform created when magma hardens within a vent on an active volcano. A natural monolith is a mountain or large rock formation consisting of a single massive stone. Both types of these geological structures are similar in that they are often steeply rising above the surrounding terrain. The unusual appearance and the buildings which are often located on these structures, amaze visitors and attract them to come back again. 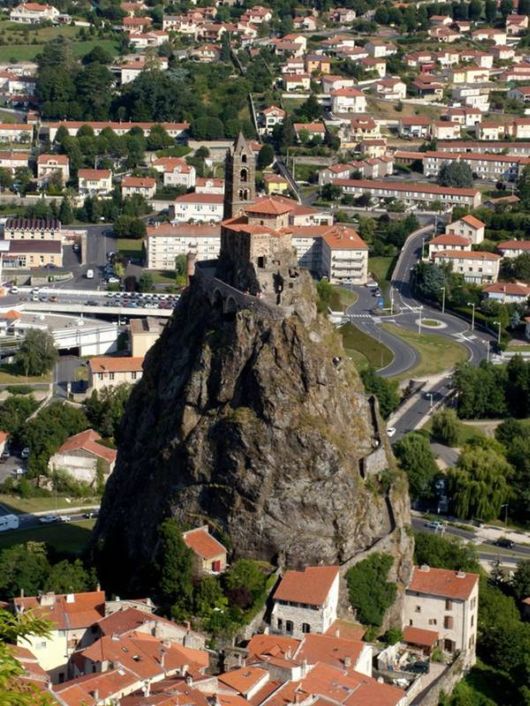 The Chapel of Saint-Michel d’Aiguilhe is a fascinating little pilgrimage chapel perched atop a rocky needle of volcanic formation jutting dramatically high into the sky, at a place near Le Puy-en-Velay in France. 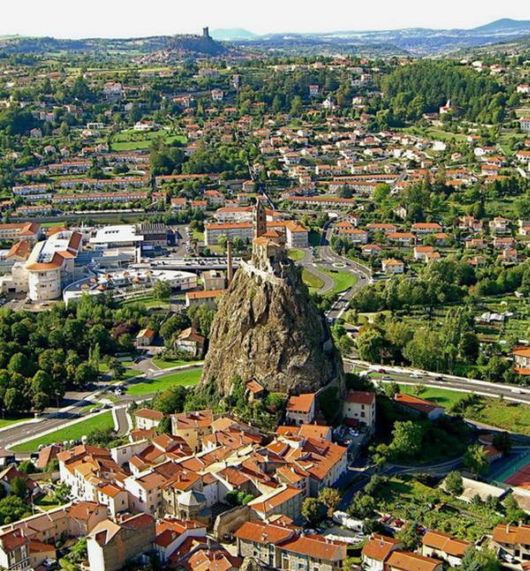 The basalt needle on which the chapel is built rises approximately 280 feet (85 m), and is reached by 268 stone steps that wind their way up the side of the rock. The chapel is surrounded by a walkway that provides a beautiful view of the city with its Puy Notre Dame Cathedral and the old bridge crossing the cusps terminal. 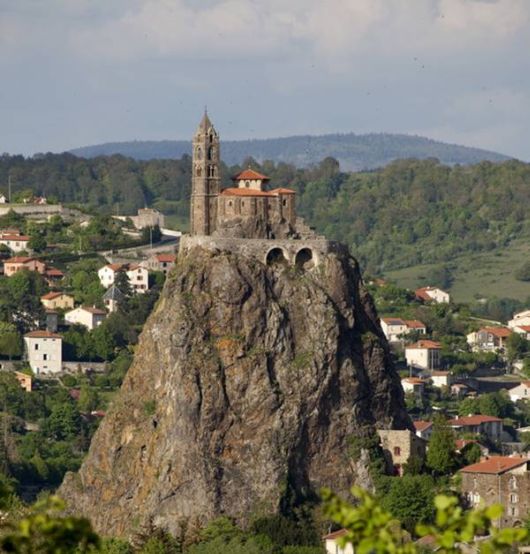 The chapel was built in 962, to celebrate the return of Saint James from the pilgrimage. In 1429 the mother of Joan of Arc, Isabelle Romée, was said to have come to the site to pray.
02. El Peñón de Guatapé ? Colombia 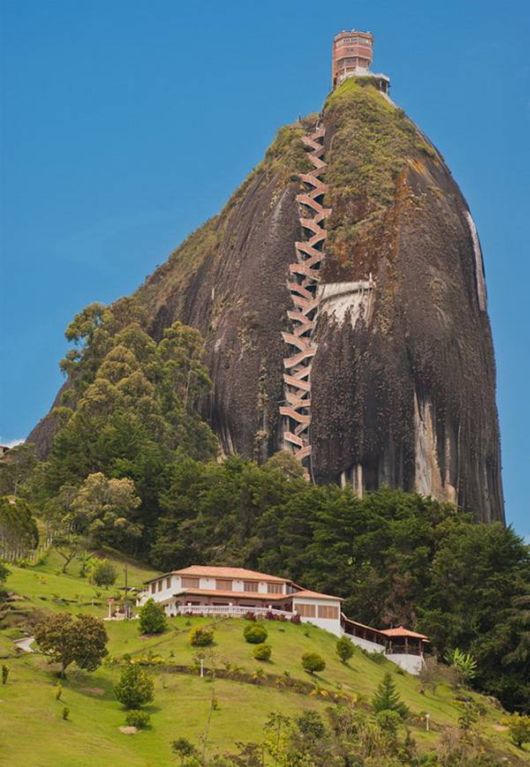 El Peñón de Guatapé is a monolithic formation located at the town and municipality of Guatapé, 1 km (0.6 mi) inside the city limits in Antioquia department, Colombia. 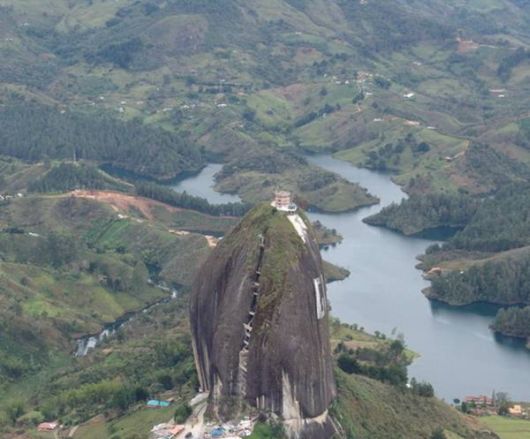 The rock was first climbed officially on July 1954. In 2006, Luis Villegas, Pedro Nel Ramírez and Ramón Díaz climbed the rock in a five-day endeavor, using sticks that were fixed against the rock’s wall. A new species of plant was found on the top of the rock, subsequently named Pitcairma heterophila by a German scientist. 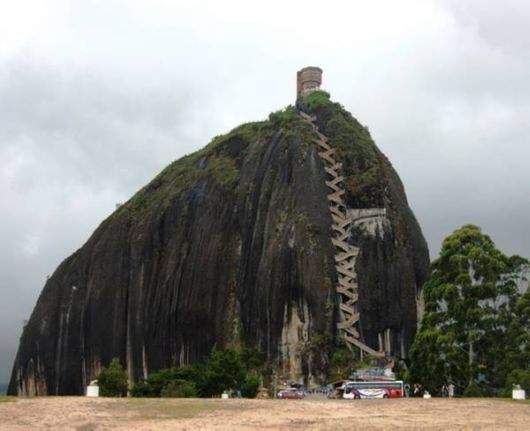 A viewing spot was built on top of the rock, where it is possible to acquire handicrafts, postcards, and other local goods. It is possible to see the 500 km (310 mi) shore-perimeter dam. There are 740 steps to the top of the viewing spot. In the 1940s, the Colombian government declared it a "National Monument. 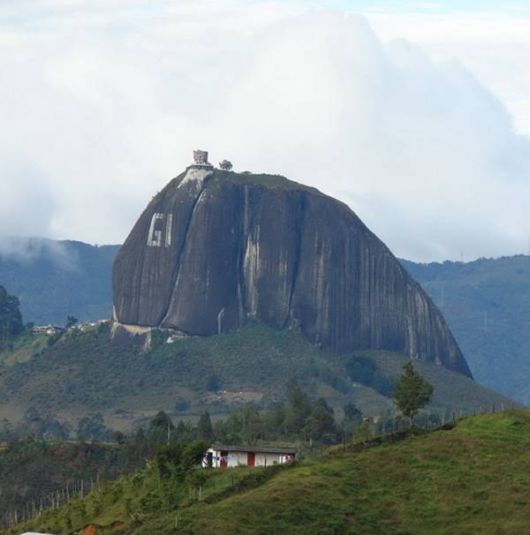 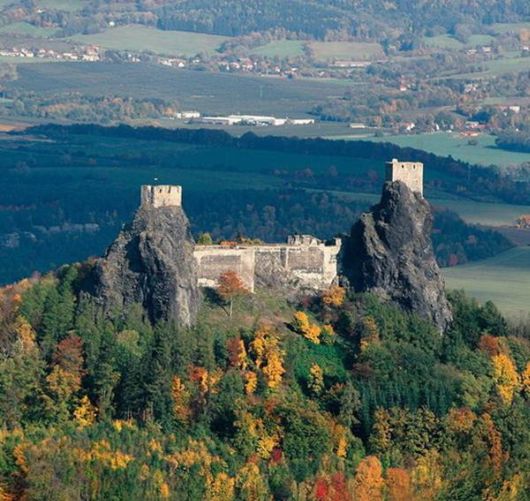 Trosky Castle is a castle ruin located some 10 km (6 mi) south of Semily, Liberec Region, Czech Republic. It is one of the most famous Czech castles and is situated on the summits of two basalt volcanic plugs. 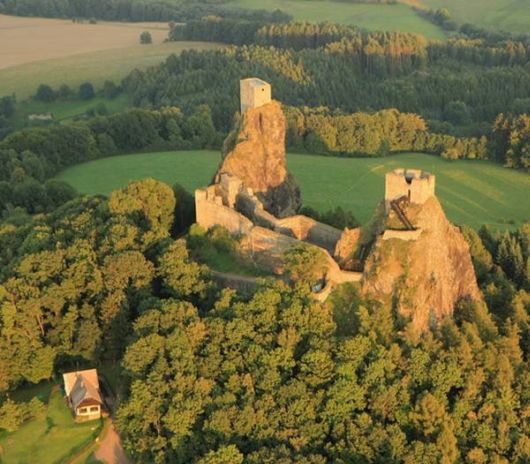 On the lower peak (47m or 155ft) is the two-storey structure called Baba (Old Woman), and on the higher outcrop (57m or 187ft) is the four-sided structure known as Panna (Virgin). The castle is a landmark which cannot be missed in the countryside known as Ceský ráj (Bohemian Paradise). 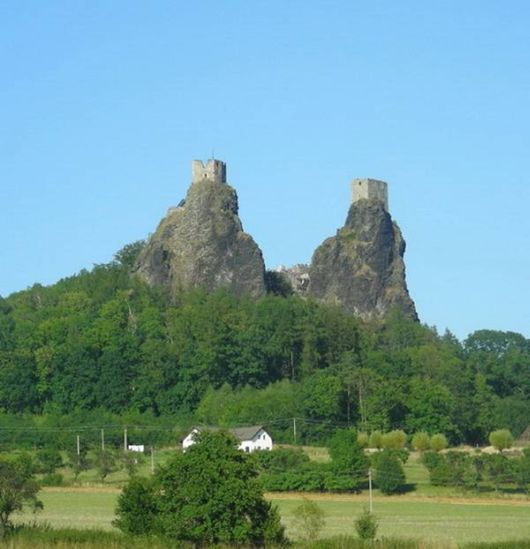 The castle was established by Cenek of Vartenberk (a commander in the Hussite Wars) in the second half of the 14th century. Two towers were constructed, one on top of each rock, and various residential buildings and outhouses erected between them. Three rings of fortified walls protected the complex.
04. Katskhi Pillar ? Georgia 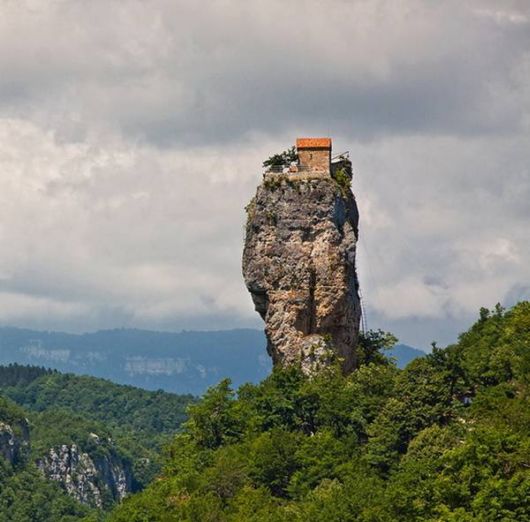 The Katskhi pillar is a natural limestone monolith located at the village of Katskhi in western Georgian region of Imereti, near the town of Chiatura. It is approximately 40 metres (130 ft) high, and overlooks the small river valley of Katskhura, a right affluent of the Q’virila. 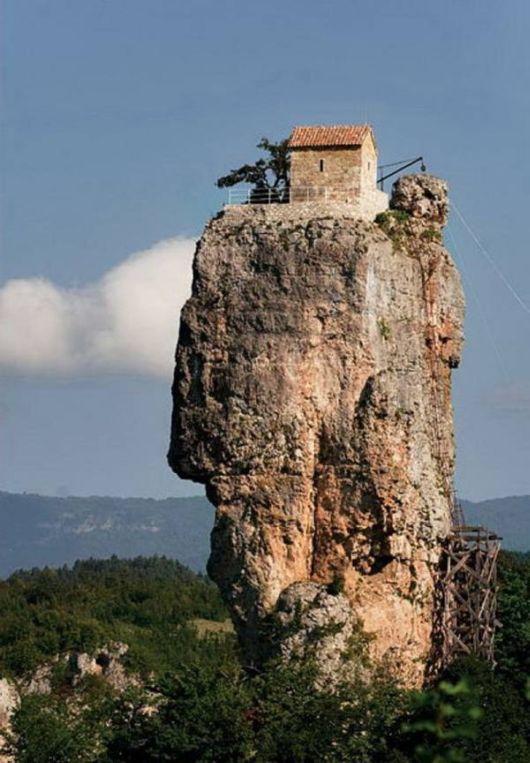 The rock, with visible church ruins on its top surface of around 150 sq m (1,600 sq ft), has been venerated by locals as the Pillar of Life. It remained unclimbed by researchers and unsurveyed until 1944 and was more systematically studied from 1999 to 2009. These studies revealed the early medieval hermitage, dating from the 9th or 10th century. 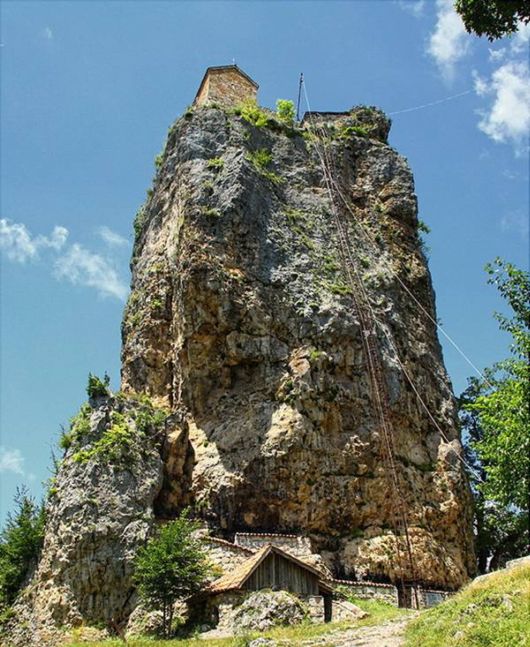 Religious activity started to revive in 1995, with the arrival of the monk Maxim, a native of Chiatura. Between 2005 and 2009, the monastery building on the top of the pillar was restored with the support of the National Agency for Cultural Heritage Preservation of Georgia. The rock is now accessible through an iron ladder running from its base to the top.
05. Zuma Rock ? Nigeria 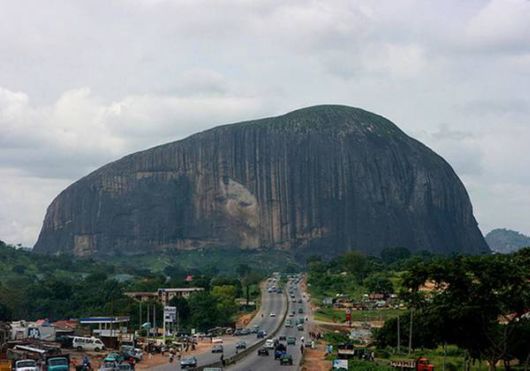 Zuma Rock is a large monolith located in Niger State, Nigeria. It is just north of Nigeria’s capital Abuja, along the main road from Abuja to Kaduna, and is sometimes referred to as "Gateway to Abuja." It is depicted on the 100 naira bill (national currency). Zuma Rock is 725 m (2,400 ft) above its surroundings. 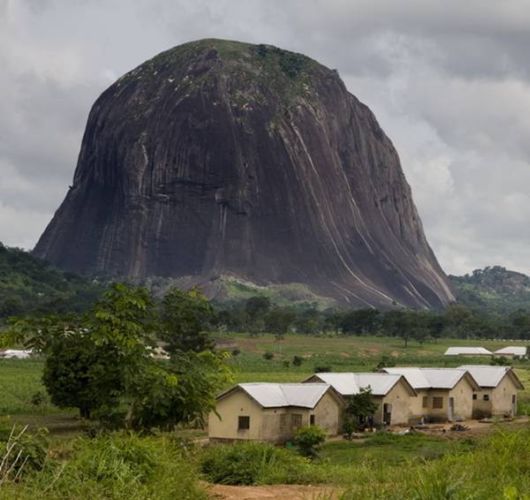 As the tourist gets closer, a human like face becomes visible with engravings representing the eye sockets, the nose and the mouth on the side of the rock that faces the Abuja – Kaduna express road. Zuma Rock represents a beautiful and unique natural work of rock formation. If offers a good environment for picnicking and relaxation. A Five Star Hotel, Zuma Rock Resort International Limited is being constructed near the rock.
06. Sugarloaf Mountain ? Brazil 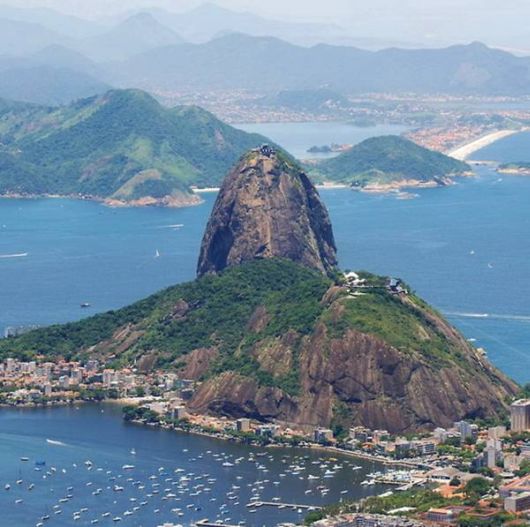 Sugarloaf Mountain, is a peak situated in Rio de Janeiro, Brazil, at the mouth of Guanabara Bay on a peninsula that sticks out into the Atlantic Ocean. Rising 396 metres (1,299 ft) above the harbor, its name is said to refer to its resemblance to the traditional shape of concentrated refined loaf sugar. 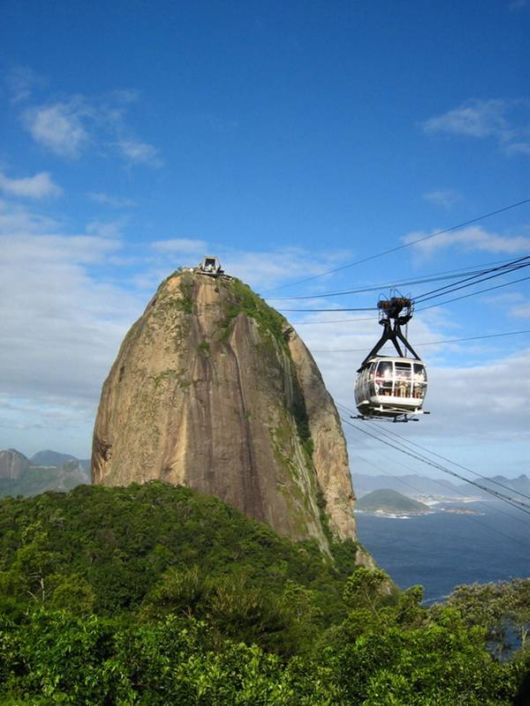 The mountain is only one of several monolithic morros (hills) of granite and quartz that rise straight from the water’s edge around Rio de Janeiro. A glass-walled cable car, capable of holding 65 passengers, runs along a 1400-metre route (4,600 ft) between the peaks of Pão de Açúcar and Morro da Urca every 20 minutes. 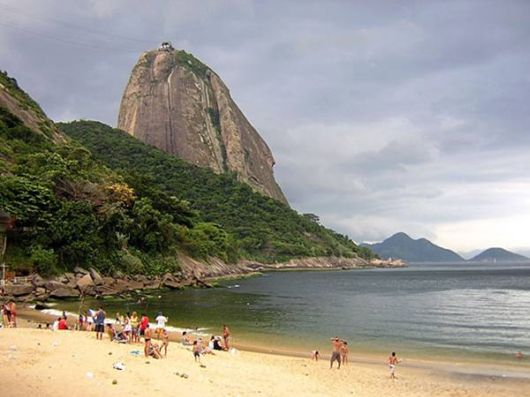 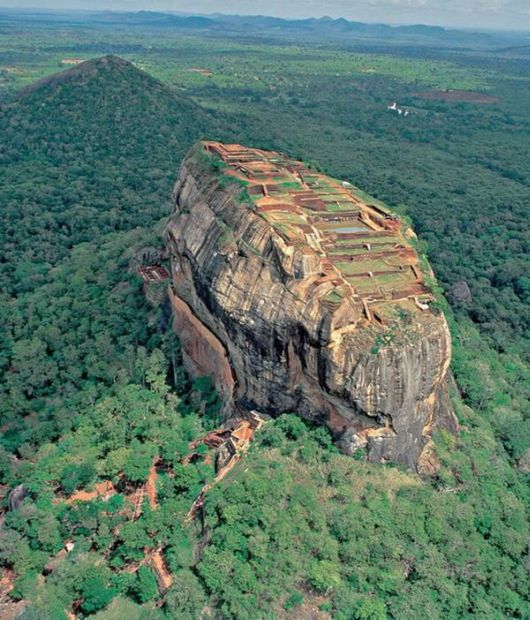 Sigiriya (Lion’s rock) is a place with a large stone and ancient rock fortress and palace ruin in the central Matale District of Central Province, Sri Lanka, surrounded by the remains of an extensive network of gardens, reservoirs, and other structures. A popular tourist destination, Sigiriya is also renowned for its ancient paintings (frescos), which are reminiscent of the Ajanta Caves of India. It is one of the eight World Heritage Sites of Sri Lanka. 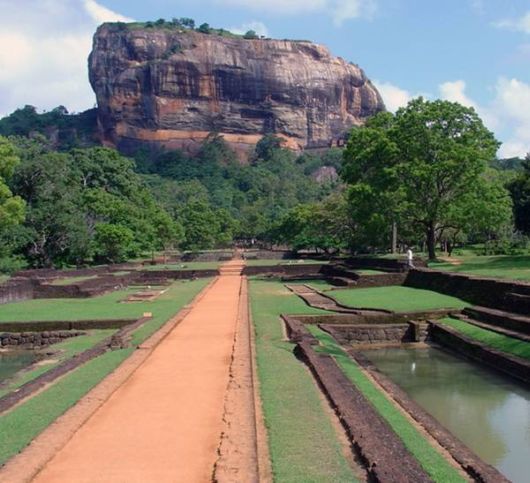 Sigiriya may have been inhabited through prehistoric times. It was used as a rock-shelter mountain monastery from about the 5th century BC. According to the chronicles as Mahavamsa (a historical poem) the entire complex was built by King Kashyapa (477 ? AD 495), and after the king’s death, it was used as a monastery until 14th century.
08. Pico Cão Grande ? São Tomé and Príncipe 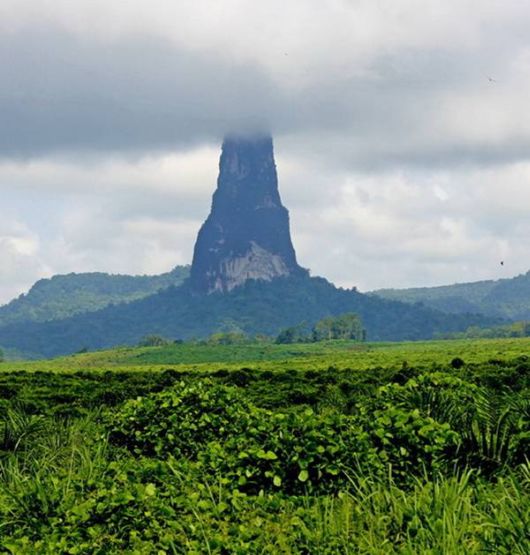 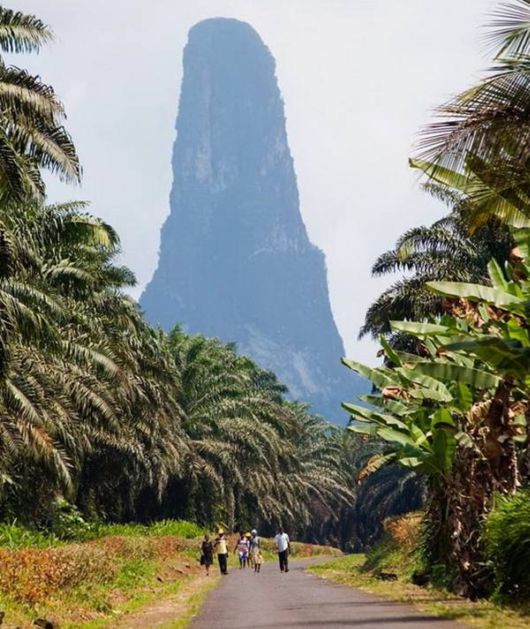 It rises dramatically over 300 m (1,000 ft) above the surrounding terrain and the summit is 663 m (2,175 ft) above sea level. Clouds and fog often cover the peak of this amazing geological structure.
09. Penyal d’Ifac ? Spain 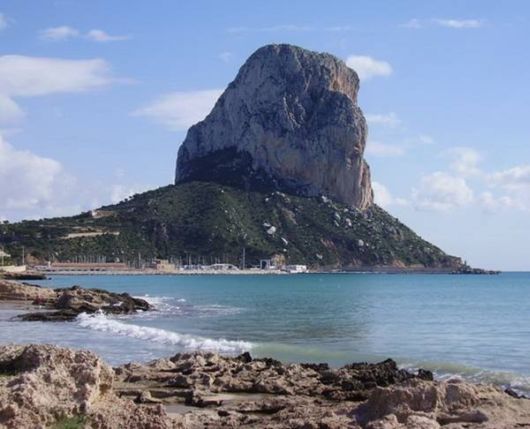 The Penyal d’Ifac is a massive limestone outcrop emerging from the sea and linked to the shore by rock debris. It is home to numerous rare plants, including a number of endemic species, and over 300 species of animals, and a nesting site for colonies of sea birds and other birds. 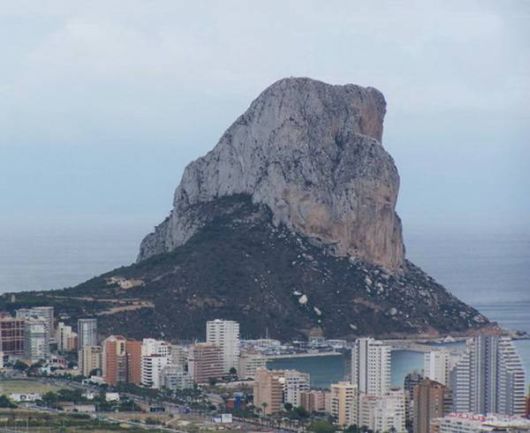 Rising to 332 metres (1,100 ft) high, the rock is a striking visual feature of the Mediterranean coastline. Behind the rock is a large lagoon cut off from the sea by strips of sandy beach and extending inland to the coastal mountains. The wetland area around the lagoon is all that remains of the formerly much more extensive wetlands of the Marina Alta.
10. Devils Tower ? USA 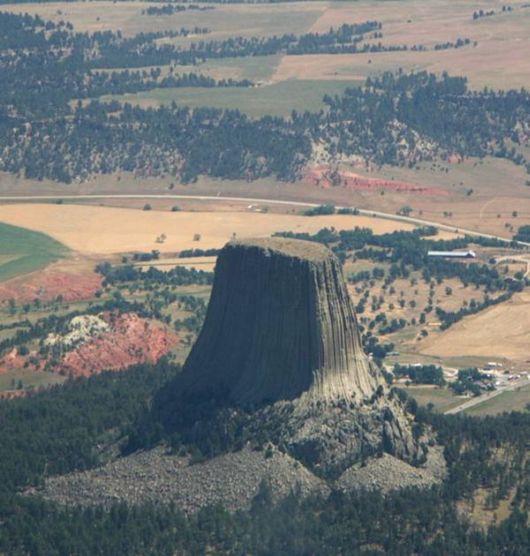 Devils Tower is an igneous intrusion or laccolith located in the Black Hills near Hulett and Sundance in Crook County, northeastern Wyoming, above the Belle Fourche River. It rises dramatically 1,267 feet (386 m) above the surrounding terrain and the summit is 5,114 feet (1,559 m) above sea level. 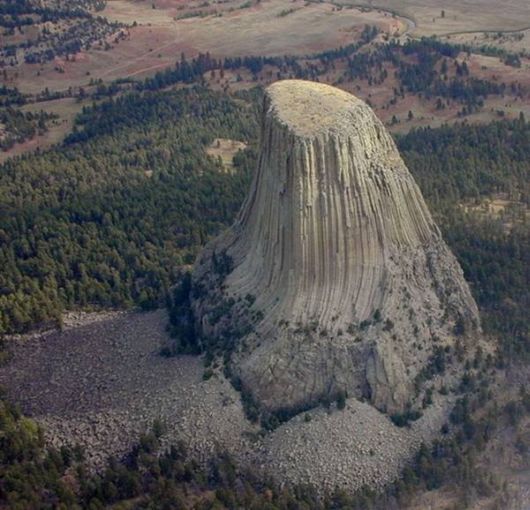 It was the first declared United States National Monument, established on September 24, 1906, by President Theodore Roosevelt. The Monument’s boundary encloses an area of 1,347 acres (545 ha). About 400,000 visitors a year visit this beautiful formation.