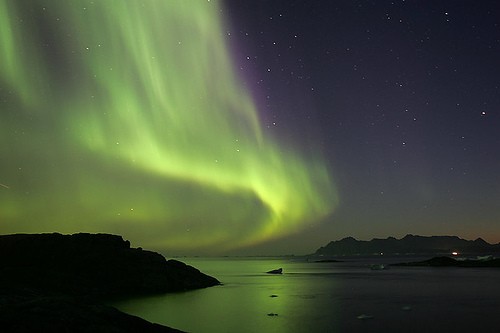 Auroras sometimes called the northern and southern (polar) lights or aurorae are natural beautiful light displays in the sky, usually observed at night, particularly in the polar regions. They typically occur in the ionosphere. The Cree people call this phenomenon the Dance of the Spirits. Its southern counterpart, the aurora australis or the southern polar lights, has similar properties, but is only visible from high southern latitudes in Antarctica, South America, or Australasia. 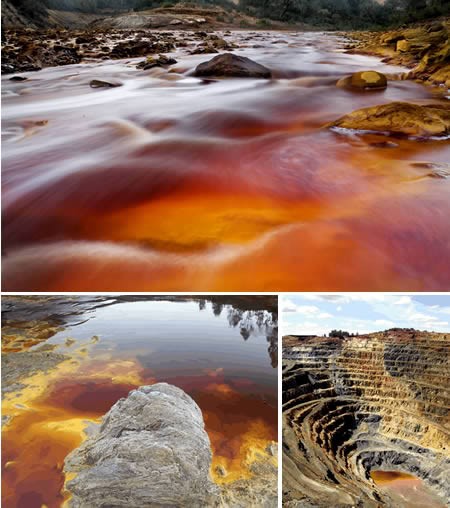 The vast mines of Rio Tinto give a hypnagogic, almost martian landscape. Its growth has consumed not only mountains and valleys but even entire villages. This river has gained recent scientific interest due to the presence of extremophile aerobic bacteria that dwell in the water.The extreme conditions in the river are analogous to other locations in the solar system thought to contain liquid water, such as subterranean Mars. Río Tinto is notable for being very acidic (pH 2) and its deep reddish hue. It is metal soluble and surely not human-friendly! 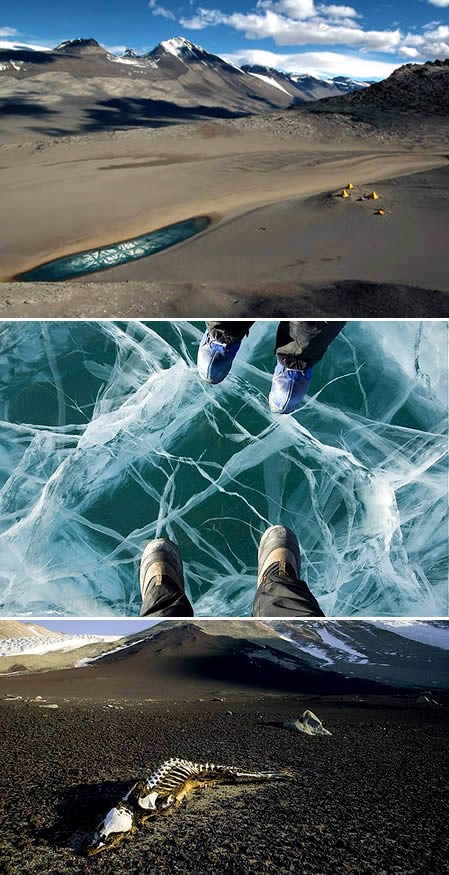 The McMurdo Dry Valleys are a row of valleys in Antarctica located within Victoria Land west of McMurdo Sound. The terrain looks like something not of this Earth; The region includes many interesting geological features including Lake Vida and the Onyx River, Antarctica?s longest river. The valley?s floor occasionally contains a perennially frozen lake with ice several meters thick. It is also one of the world?s most extreme deserts Under the ice, in the extremely salty water, live mysterious simple organisms, a subject of on-going research. Scientists consider the Dry Valleys perhaps an important source of insights into possible extraterrestrial life.

4. The Richat Structure, near Ouadane, Mauritania 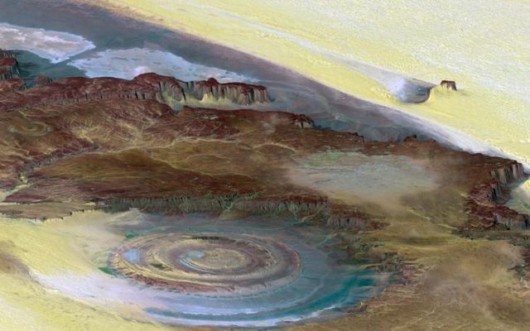 The Richat Structure is a prominent circular feature in the Sahara desert of Mauritania near Ouadane. It has attracted attention since the earliest space missions because it forms a conspicuous bull?s-eye in the otherwise rather featureless expanse of the desert. The structure, which has a diameter of almost 50 kilometres (30 miles), has become a landmark for space shuttle crews. 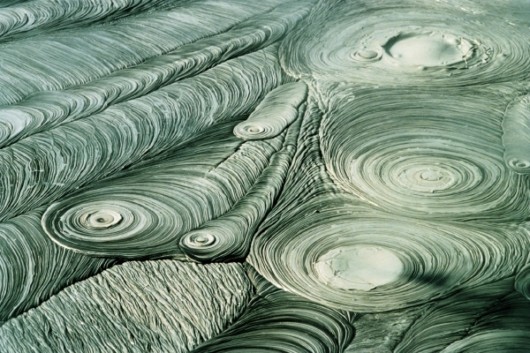 Rotorua is a city on the southern shores of the lake of the same name, in the Bay of Plenty region of the North Island of New Zealand. Rotorua city is renowned for its unique rotten eggs aroma, which is caused by the geothermal activity releasing sulphur compounds into the atmosphere. Geothermal activity is at the heart of much of Rotorua?s tourist appeal. Geysers and bubbling mud-pools, hot thermal springs and the Buried Village (Te Wairoa) ? are within easy reach of the city.This thermal activity owes itself to the Rotorua caldera on which the city lies. Waters of ivid colors, from yellow to orange to green which is partially possible to visit it. 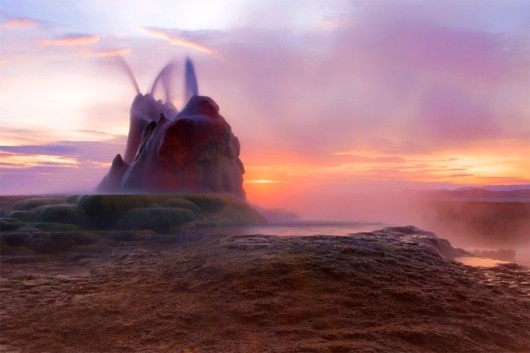 Fly Ranch features two geysers, one of which is dormant. The other, Fly Geyser, was accidentally formed by a water well drill that hit a geothermal source, and continuously sprays hot water. Fly Ranch is private property and does not allow visitors. 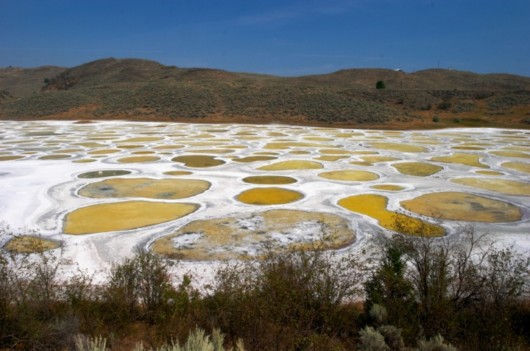 Spotted Lake is a saline endorheic alkali lake located northwest of Osoyoos in British Columbia. In the summer, most of the water in the lake evaporates leaving behind all the minerals. Large spots on the lake appear and depending on the mineral composition at the time, the spots will be different colors. The spots are made mainly of magnesium sulfate, which crystallizes in the summer. Since in the summer, only the minerals in the lake remain, they harden to form natural walkways around and between the spots. 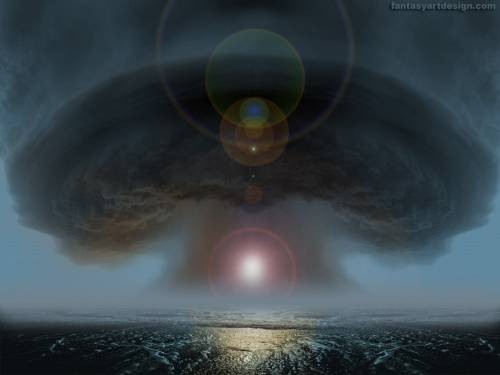 The Bermuda Triangle, also known as the Devil?s Triangle, is a region in the western part of the North Atlantic Ocean in which a number of aircraft and surface vessels are alleged to have mysteriously disappeared in a manner that cannot be explained by human error, piracy, equipment failure, or natural disasters. Popular culture has attributed these disappearances to the paranormal, a suspension of the laws of physics, or activity by extraterrestrial beings. Apparently it doesn?t seem alien but it is really scary! 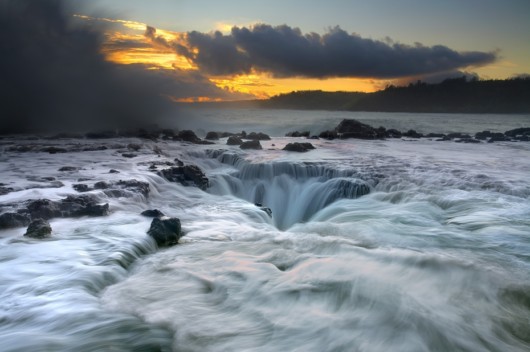 Kauaʻi is the oldest of the main Hawaiian Islands, it is the fourth largest of the main islands. Seaside lava ledges make for otherworldly experiences on this often-overlooked Hawaiian island. 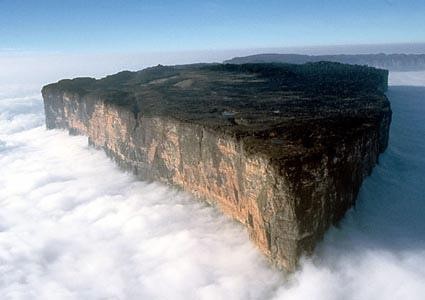 Since long before the arrival of European explorers, the mountain has held a special significance for the indigenous people of the region, and it is central to many of their myths and legends It is a pretty remarkable place. It is a tabletop mountain with sheer 400-metre high cliffs on all sides. There is only one ?easy? way up, on a natural staircase-like ramp on the Venezuelan side ? to get up any other way takes and experienced rock climber. On the top of the mountain it rains almost every day, washing away most of the nutrients for plants to grow and creating a unique landscape on the bare sandstone surface.