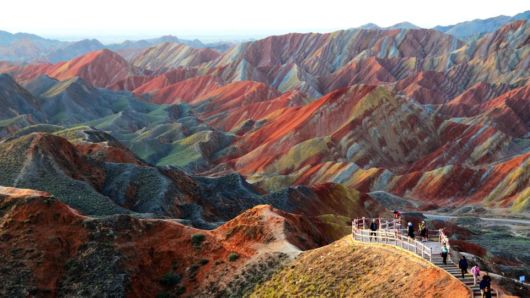 China?s rainbow mountains
Imagine a world where the mountains are striped with candy colours and people are dwarfed by the landscape?s immensity. Such a place exists in China?s northwestern Gansu Province, where 24 million years of vibrant stone and mineral deposits have created rainbow-striped mountains.
The tinted peaks were fashioned by uplift from the Earth?s tectonic plates ? the same ones that formed parts of the Himalayan range ? while rain, wind and erosion shaped them into the jagged world seen today. Located around the city of Zhangye, the area covers more than 10sqkm and the vista is most dazzling after a rainfall, when the colours glow even brighter than usual. (Melinda Chan/Getty) 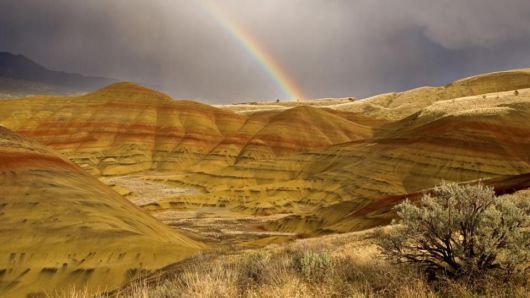 Oregon?s painted hills
With the hipster amenities of Portland to the west and the national wonder of Crater Lake to the south, eastern Oregon?s John Day Fossil Beds often get overlooked. This 14,000 acre national park is a natural museum of geological eras, though it is the Painted Hills region that offers the most dramatic view. The spectacular landscape was shaped by numerous volcanic eruptions and extreme climate change around 35 million years ago. As time wore on, the lush vegetative climate turned more arid. Ash, clay, minerals and decaying plant matter all mixed into the soil, leaving pronounced streaks of gold, black, red ? even purple and blue. The colours change according to the air?s moisture level, and are said to be most vivid come late afternoon. (Purestock/Getty) 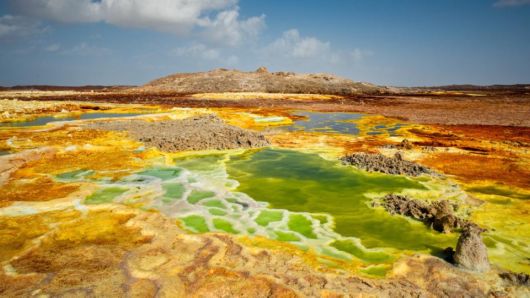 Ethiopia?s alien crater
In the language of the Afar people, Dallol means disintegrated. So it makes sense that Ethiopia?sDallol Volcano is less a volcano than a sunken crater. Caused by groundwater and magma colliding, sulphur, iron oxide, salt and other minerals have created the vivid greens and neon yellows that form one of the most remote, untouched and ethereal natural rainbows in the world.
Dallol lies near the border of Eritrea in an area that was closed to foreigners until 2001. Even today it is prudent to travel with an armed guard, as border tensions persist and kidnappings have been known to happen. Because of this, only a few hundred visitors make it to this remarkable landscape every year ? which is probably for the best considering the fragility of the landform, the toxic gases and the temperatures that average above 30C. (Thierry Hennet/Getty) 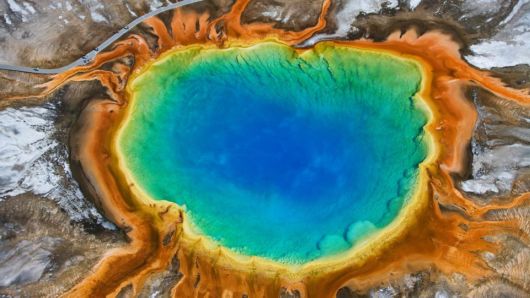 Wyoming?s ultimate spring
Yellowstone?s Grand Prismatic, named for its brilliant colouration, is the largest hot spring in the US ? its 370ft diameter put into perspective by the paved walkway visible near the photo?s top. The colour spectrum that ranges from deep blue to burnt red is the product of trillions of thermophiles, or bacterial microorganisms, which flourish in hot waters. Different temperatures determine the hue, and the centre?s blue is the result of extreme heat that leaves the bacteria sterile. Grand Prismatic is one of many coloured springs in Yellowstone and draws millions of visitors every year. (Werner Van Steen/Getty) 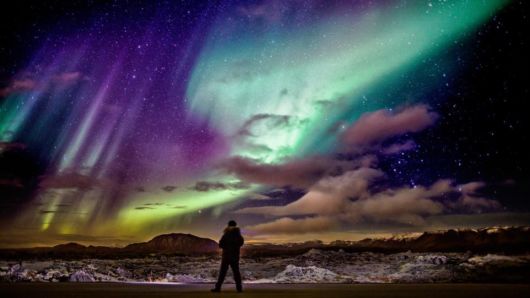 Light up the night in Iceland
The Aurora Borealis appears in a complete spectrum of colours, from light pinks, reds and greens to the yellows, blues and violets seen here on Iceland?s Reykjanes Peninsula. The beams that dance against the night?s sky are the result of particles colliding, sometimes resulting in streams, ripples or arcs across the horizon. Despite a host of science to explain how exactly these lights come to fruition, there is an alien energy to the glow that makes this a mystery often better left unexplained. (Arctic-Imag)