These magical pictures capture the ethereal and otherworldly beauty of the melting of Jokulsarlon – the largest glacial lagoon in Iceland.

The stunning natural wonder is made up of strange ice formations that change constantly in response to the temperature.

From June to September each year the frozen glacier begins to melt – which gives the lagoon and its ice islands a haunting life of its own. 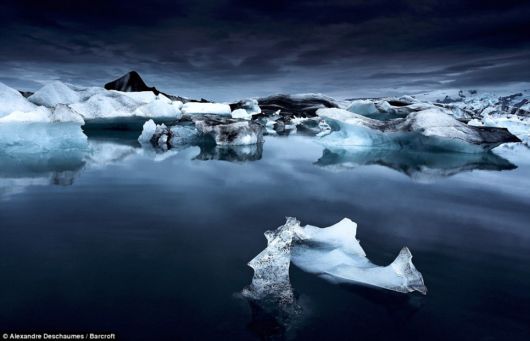 Ethereal: Taken at midnight at the Jokulsarlon Lagoon, photographer Alexandre Deschaumes said the light gives an otherworldly feel to the images 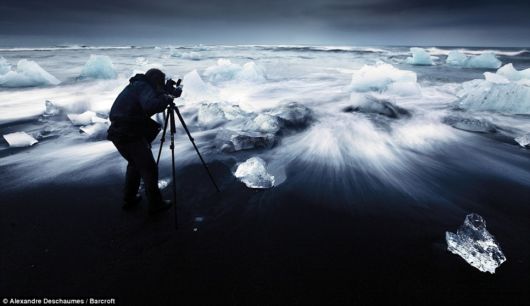 Adventurous photographer, Alexandre Deschaumes, 28, from the French Alps is so in love with the lagoon that he has spent three years visiting it during the melting season.

He said: ‘I felt inspired by the otherworldly feeling and original beauty of this place,

‘There is a truly fascinating balance of the surreal, desolate, but still completely elegant and mesmerising landscape. I wanted to see some dark and inspiring landscape.’

Thanks to global warming the incredibly beautiful nine mile-long fresh water lake of Jokulsarlon has nearly doubled in size – in 1975 it used to be only five miles-long.

Mr Deschaumes said: ‘My quest was to reveal and show the world that this kind of atmosphere and places exists, and maybe trying to open a ‘new door’ of imagination and dreams.

‘It is important for me that, through my work, people can realise how amazing nature is – that places like this really exist.

‘As people become inspired by this beauty, maybe they would like to be more careful with the environment.’ 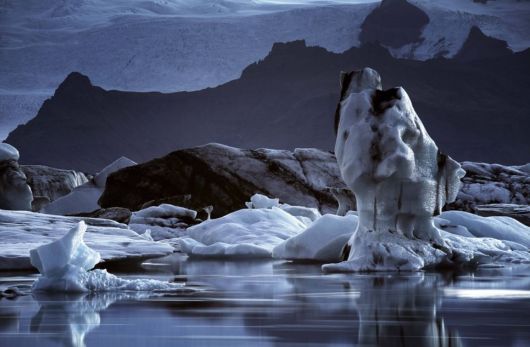 Melting: A mix of still ice and moving ice is captured as the glaciers begin to melt creating a haunting effect.