These breathtaking photographs show climbers scaling a treacherous tunnel made entirely from ice to make their way out of a cave carved in a frigid glacier.

The brave explorers look as though they are on the verge of sliding down the swooping sides of the cave – a vertiginous drop of more than 20m onto jagged ice.

Braving freezing temperatures and a dangerous ascent, Alexandre Buisse clung to supports screwed directly into the walls of ice to photograph his friends scaling the Mer de Glace glacier in Chamonix, France. 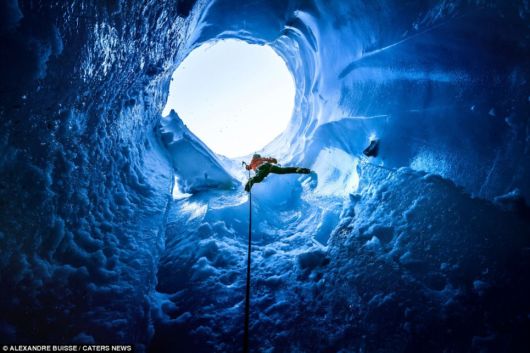 Treacherous: The walls of the cave are made entirely from slippery ice, and climbers face a 20m plummet to jagged ice below if their ropes fail to hold them 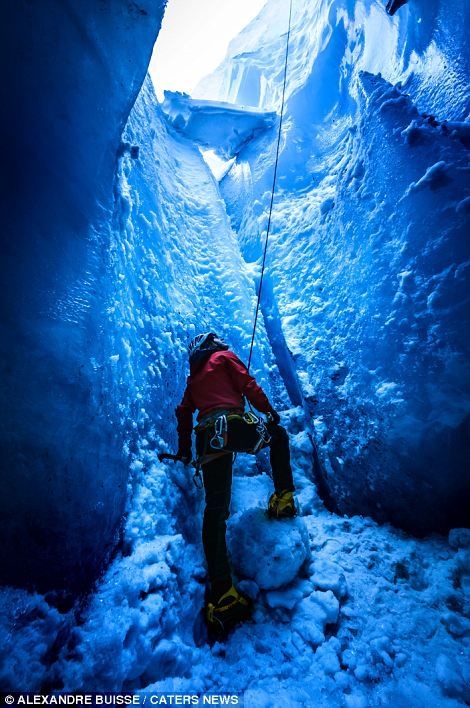 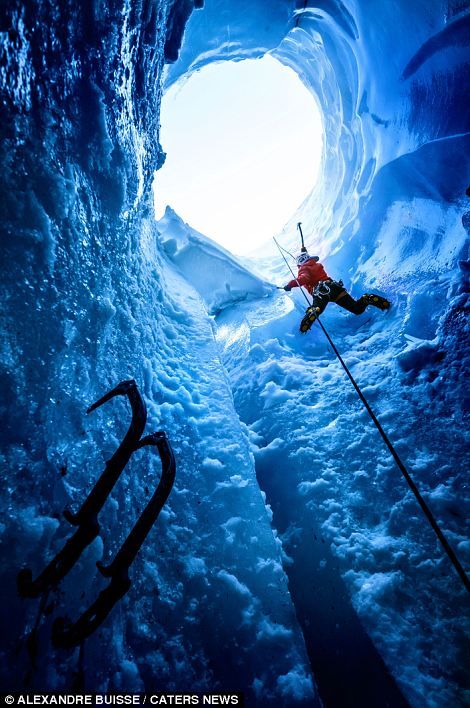 Courage: Alexandre Buisse clung to supports screwed directly into the walls of ice to capture these spectacular images of his friends climbing in the caves 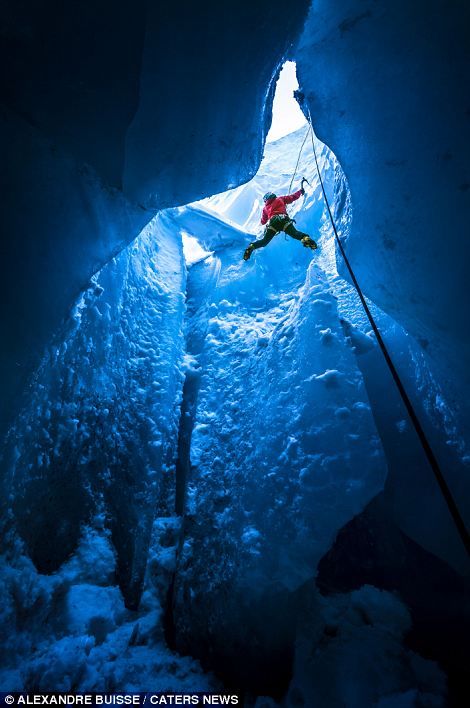 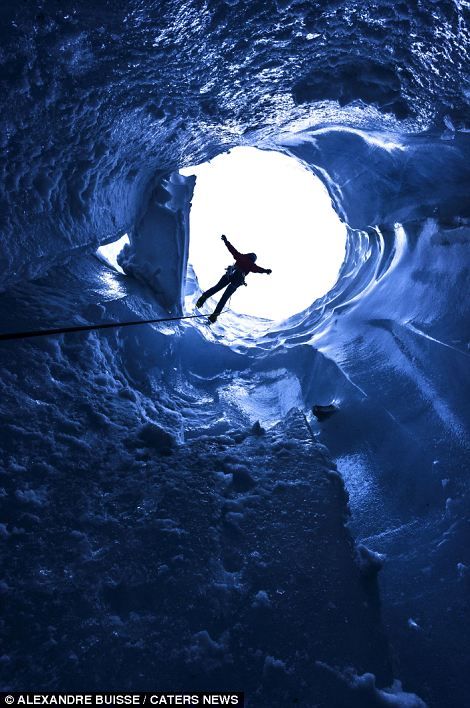 Look! No hands! Ms Vassail reaches the narrow mouth of the crevasse – and heartstoppingly lets go to allow the rope to take her entire weight at the top

As the sun’s rays pour into the narrow cave, the ice looks decidedly unstable – but the frozen cliff faces are more than capable of holding the weight of the climbers.

Mr Buisse said: ‘I was shooting from inside the cave by hanging on to a couple of ice screws I’d fixed on the walls.

‘I was belaying the climber and shooting at the same time. The climber was on a top rope as the angle was too steep and the ice too hard to allow easy placement of ice screws on lead. Once I was done shooting, I climbed out myself.

‘The first cave was about 20m deep, and three by six metres wide. The second one was deeper, around 30m, and much narrower, one by two metres for most of its length.

‘Both caves were connected to tunnels underneath, but they were either sealed by ice or too narrow for us to explore.

‘Climbing out took between 5 and 20 minutes, depending on the chosen angle of the wall.’ 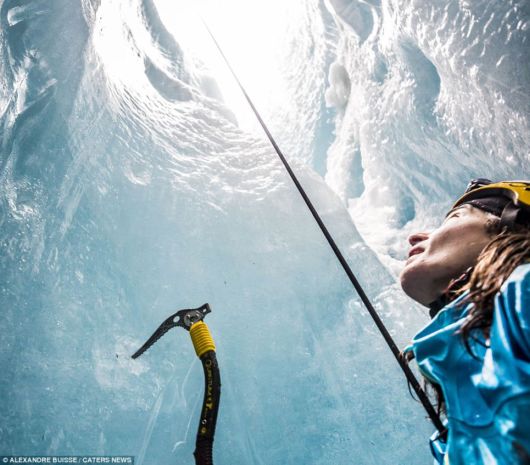 Daunting: Giulia Monego faces the terrifying climb out of the crevasse 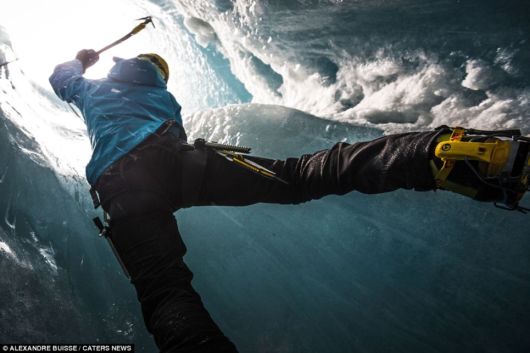 Daredevil: Ms Monego tackles the daunting ascent from the icy cave, which Mr Buisse said was about 20m deep, and three by six metres wide 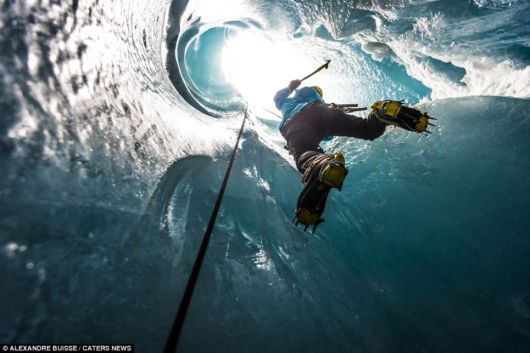 Tools for the job: Wielding an ice axe and with her boots equipped with crampons, Ms Monego makes her way up the steep walls

Mr Buisse said he only managed to capture the beautiful images with some hardship on his part.

‘It was pretty difficult to take the pictures – the light was tricky to manage, and I was directly in the line of falling ice most of the time,’ he said.

‘On the second shoot, conditions were quite warm – it was actually raining on the glacier – and there was a trickle of water landing directly on me, so I was soaked and very cold by the time I had to climb out.

‘But as often, the final results were worth all the hardships.’

Dark: These pictures show Ms Monego as she climbs from a second, deeper, narrower cave 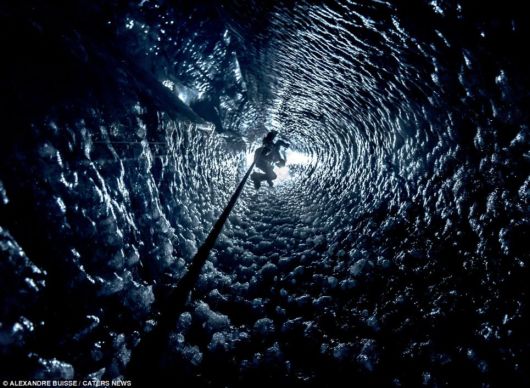 Seasonal: here is only a short window of time in November and December each year when the caves can be climbed

The incredible formations are a special kind of crevasse known by the French as ‘moulins’ – or ‘windmills’. They are created in the spring and summer when meltwater carves a way through the glacier to create vertical well-like shafts.

Part of glaciers’ internal plumbing systems, such streams can sometimes reach all the way to the bottom, creating a complex network of tunnels.

There is only a short window of opportunity in November and December each year when the caves can be climbed – when the water flow has stopped, but the holes haven’t yet filled up with snow.

Mr Buisse added: ‘I love shooting ice climbing, as it is a very photogenic and foreign medium.

‘What attracted me to the moulins in particular was the unique point of view, from inside a crevasse, which is very rarely seen.

‘With daylight filtering through the ice, it created a strong contrast and gorgeous light, that is pretty much impossible to replicate.’