The Shilin stone forest has been a major attraction for thousands of years, and a source of local myths and legend. It is an amazing place to visit, and sees many tourists eager to see the majestic rock formation ‘growing’ out of the ground. The area is full of caves, springs and underwater streams and rivers to explore. 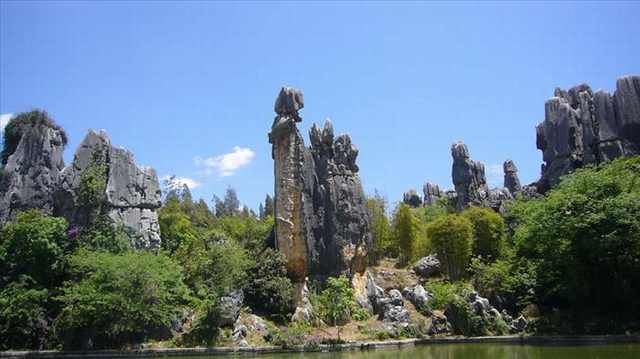 Imagine a forest full of trees. Now imagine all the trees are actually rocks, ‘growing’ out of the ground, some of them as old as 270 million years, over an area of 96,000 acres. 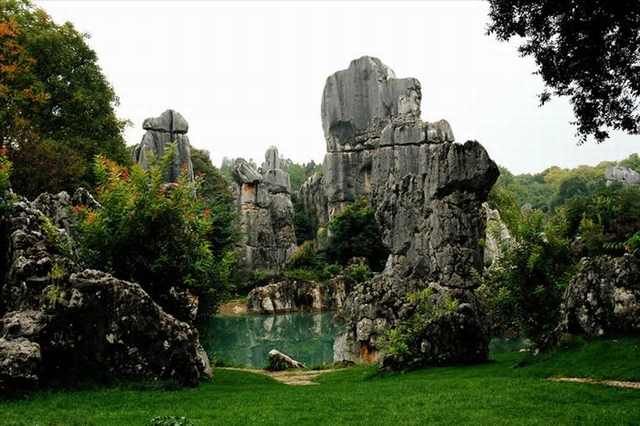 The Ashima rock is the most famous formation in the stone forest. An ancient legend claims that the forest is the birthplace of Ashima, a beautiful girl of the Yi people. She had fallen in love but was forbidden to persue it, and instead was turned to stone in the forest that still bears her name. Each year, on June 24th, the locals celebrate the ‘torch festival’, which includes folk dancing and wrestling competitions. 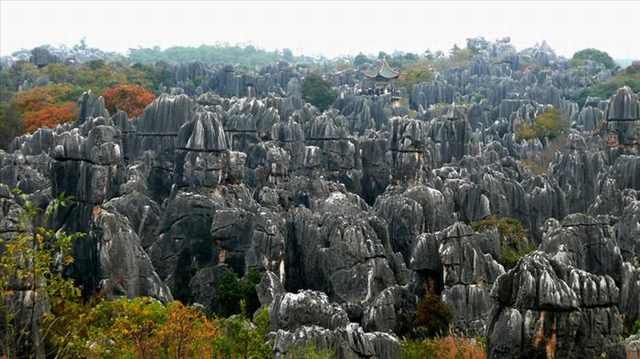 Karst rock is made of limestone, and this rocky landscape is filled with secret caves and sinkholes, due to undergrounds streams slowly eroding the rock and creating fascinating new structures, so no rock is like the other. 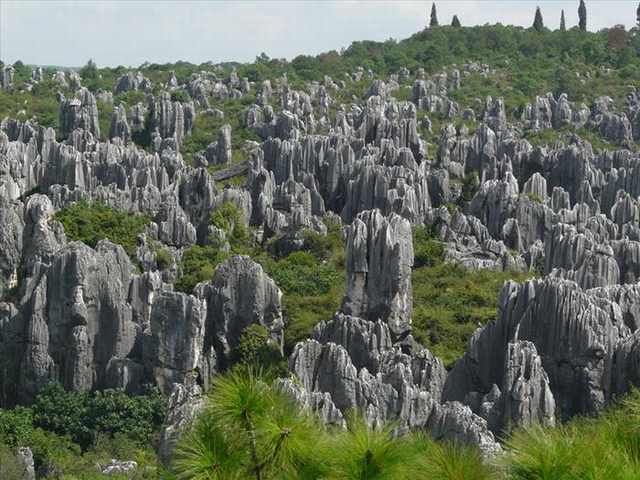 The rocks eroded by the streams seem to ‘grow’ out of the ground. 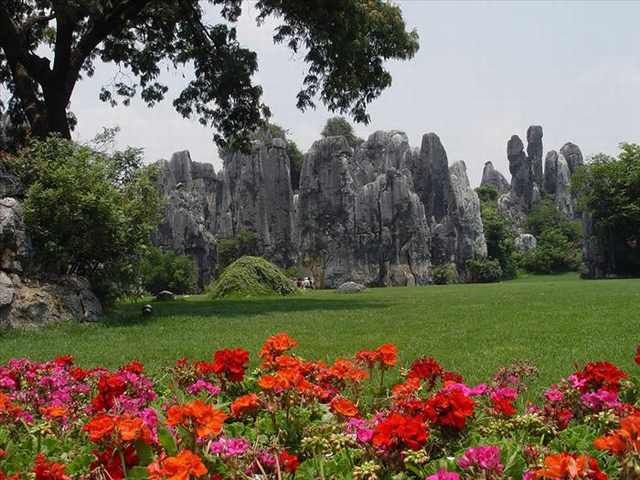 The Shilin Stone forest is actually only a part of a larger landscape of rocks, the South China Karst. 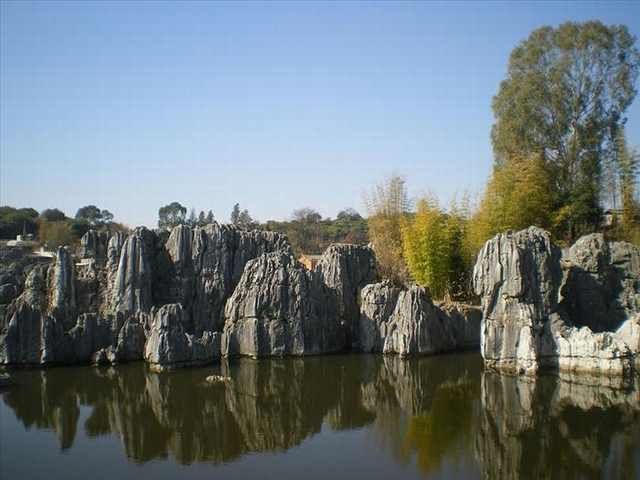 South China is known for having the most complex and fascinating karst landscapes in the world. 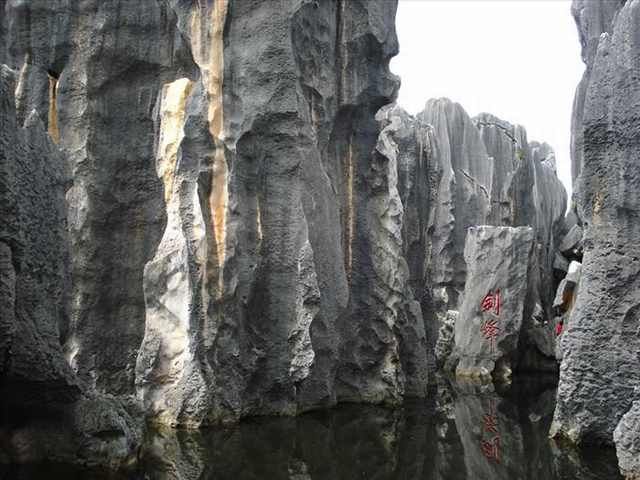 Be careful, you don’t want to get lost! Many have gotten lost for a while in the labyrinth, as the karst forests come with caves, peaks, ponds, waterfalls and underground streams and rivers, make the way anything but simple. 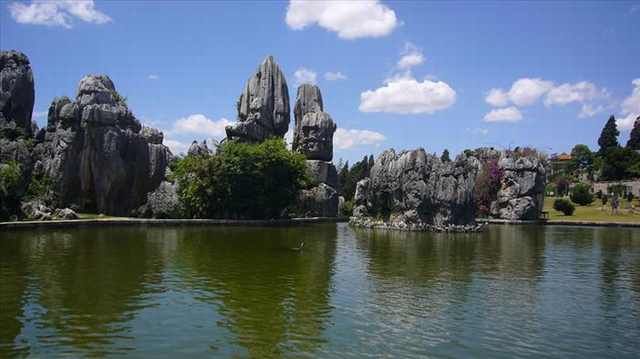 Over the thousands of years men have lived close to these rocks, names have formed for most of them. Names like Ten Thousand Year Mushroom, Mother and Son, Camel riding on Elephant, Buddha Stone, Beautiful maiden ascending from the water and hundreds more… 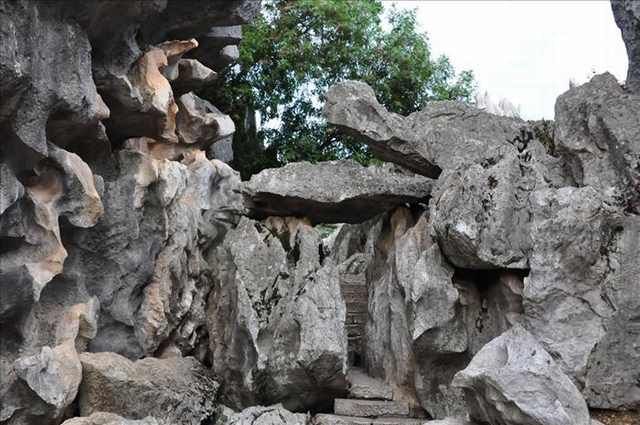 Old pathway chiseled into the rock. 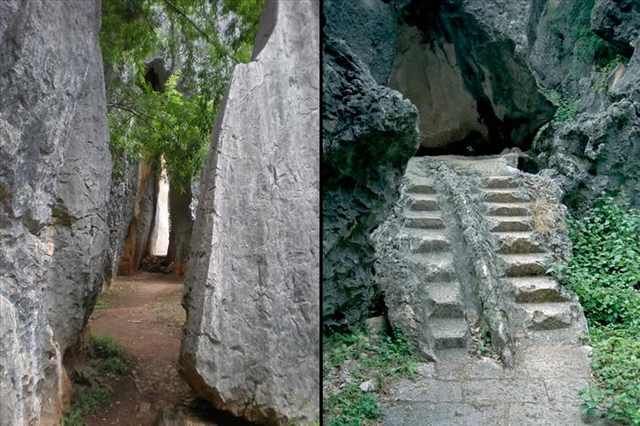 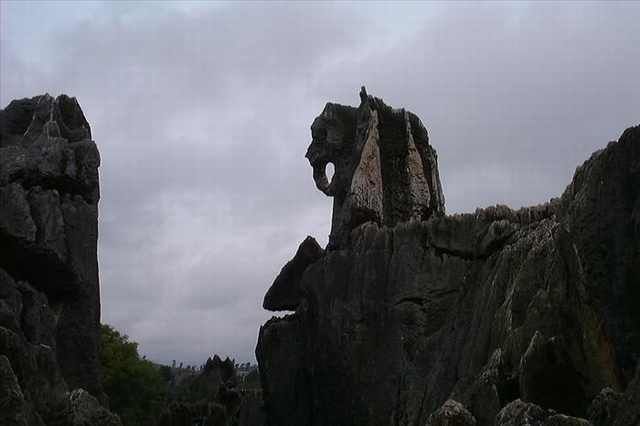 What is known as the Elephant (on the right) of the stone forest. 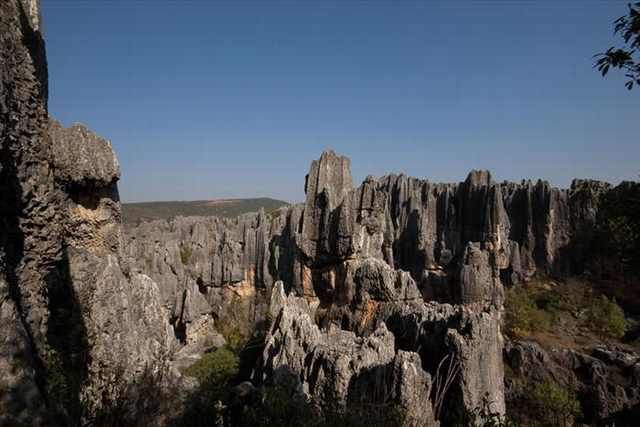 The South China Karst has been declared a UNESCO world heritage site since 2007. 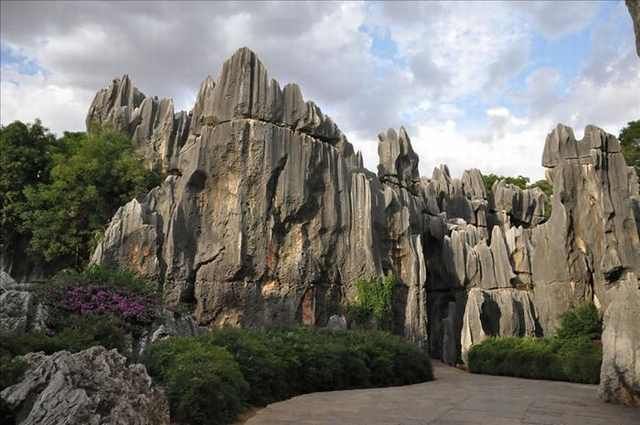 The Sani people (a branch of the Yi nation) have a legend: “Asham was a beautiful, yet poor girl of the Yunan region. She was very clever and kind hearted, and when she was still a girl, she saved a boy named Ahei who lost his way. Ahei, an orphan, had to toil for a cruel landlord. Asham took him home and her parents adopted him. They grew together, fell in love and got married, and were very happy. Unfortunately, the son of the cruel landlord abducted Ashmam for her beauty. Ahei, learning of this, saved her in a daring attack that killed both landlord and son. They escaped into the stone forest, where they raised a family and lived happily ever after, and their children became the first of the Sani people…” 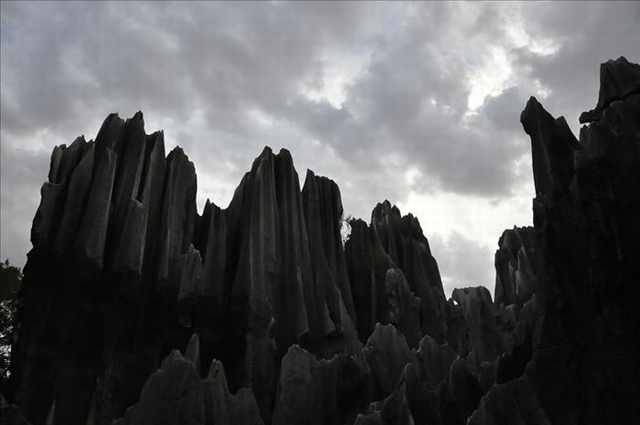 The Naigu stone forest has a black surface, and indeed the word Naigue means ‘black’. 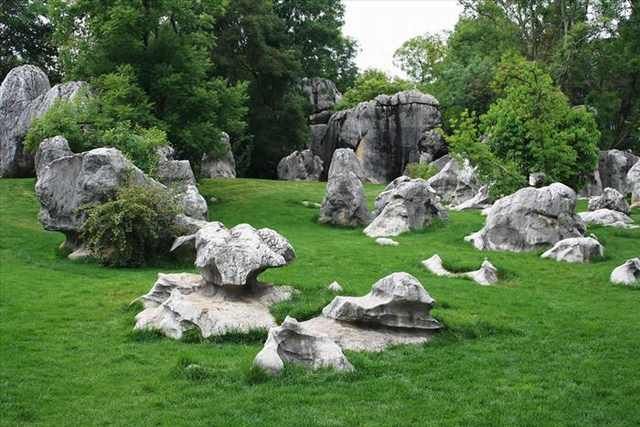 Many caves adorn this area, some of them go into the mountains, and some go underground, where they may meet the underground streams and rivers. 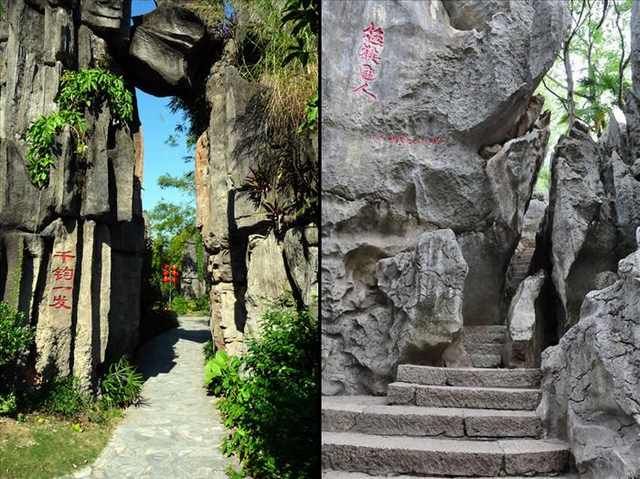 A walkway built many years ago. 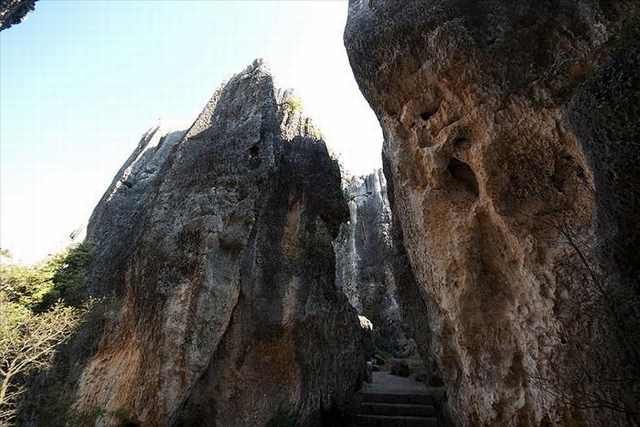 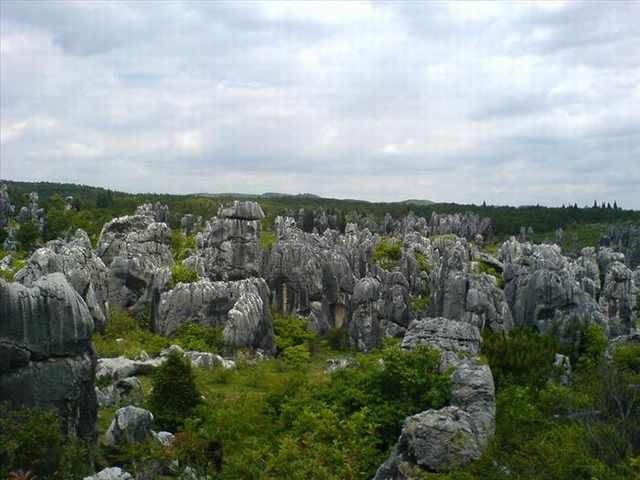 Amazing view of the stone forest. 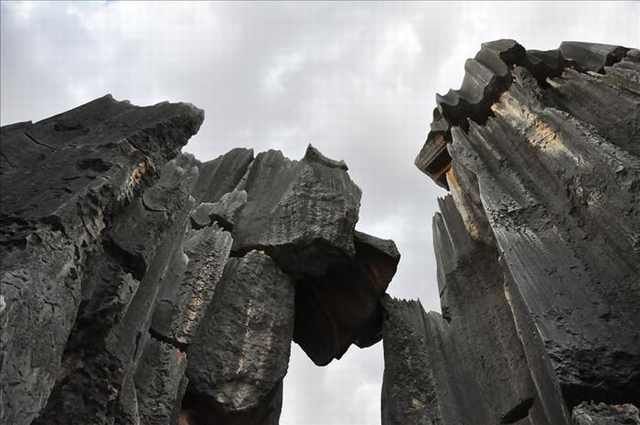 Every stone is different. Some of the formations are more rugged and blunt, while others seem more lifelike and elegant. 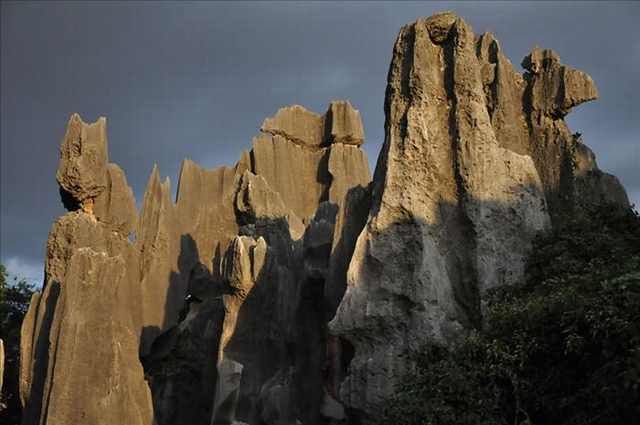 The Shilin stone forest includes more than 1000 stone pillars that reach from 15 to 100 feet (30 meters) tall. 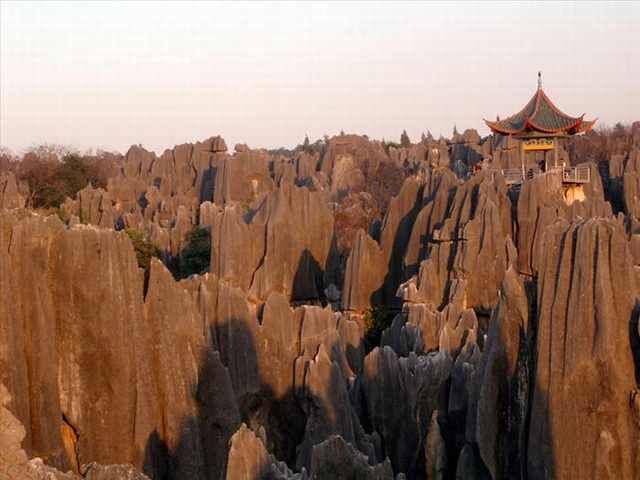 Dusk colors the stones in orange and brown. 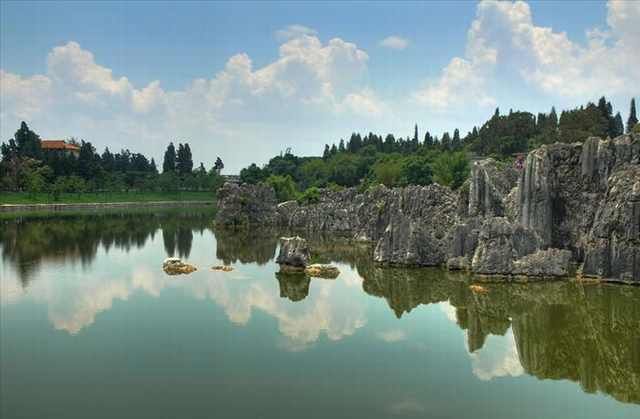 A view that hasn’t changed in a millennium.