Dicing with death around fountains of 1,000C glowing lava wouldn’t be everyone’s idea of the perfect day.

But for daredevil photographer Skarphedinn Thrainsson, teetering around the world’s deadliest volcanoes is nothing but another thrilling day at the office.

Despite being lucky not to be injured or killed by chunks of volcanic ash crashing into the ground around him, his resulting images are stunning. 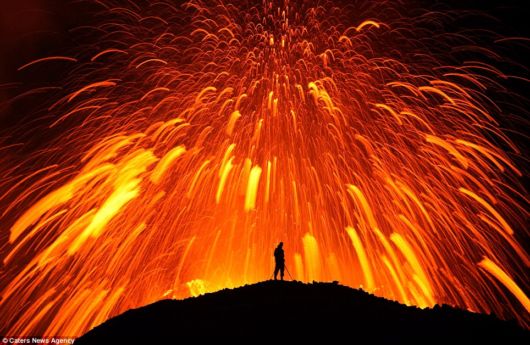 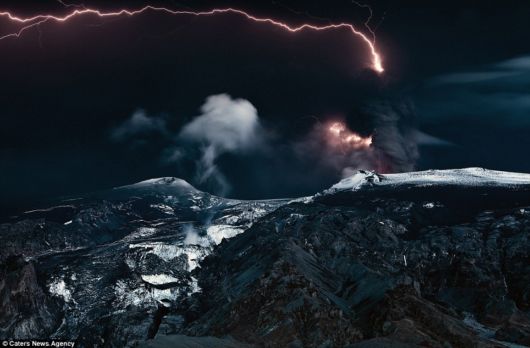 Illuminating: Lightening forks the sky as black smoke billows out of the volcano

From bright orange jets of lava darting into the night sky like a firework, to fellow madcap photographers standing just feet away from molten streams raining from the skies, these photos show a different side to the destruction.

Mr Skarphedinn, 39, said: ‘It’s the most amazing thing I’ve ever experienced in my life.

‘It’s hard to describe the feeling you get when you’re standing in front of an erupting volcano – all the heat, the noise, the smell and the lightning strikes.

‘You feel very small and powerless in front of a volcano. And going back to normal landscape photography is just boring after it.

‘It’s incredibly dangerous though and sometimes I have to walk across the new lava so could easily get burned.

‘It was also dangerous to be in the area around Eyjafjallajokull in Iceland where I took a lot of my pictures last year because the lightning was striking through the ash cloud.’ 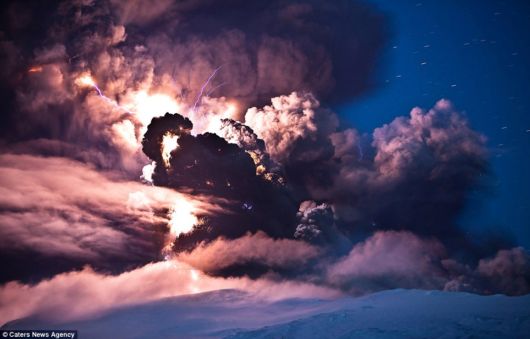 Lightening: A black swan is depicted in the clouds – and behind are the purple veins of a thunderstorm 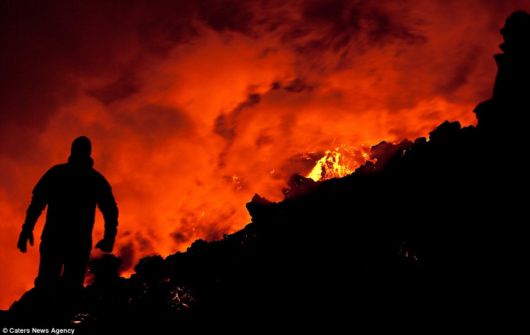 Spooky: This eerie image shows a man coming towards the camera – or is he heading closer to the volcano? 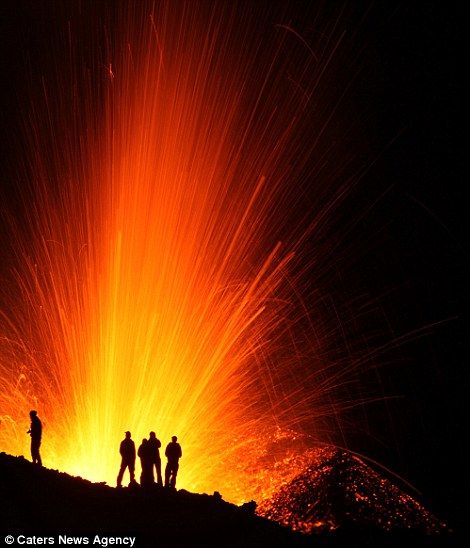 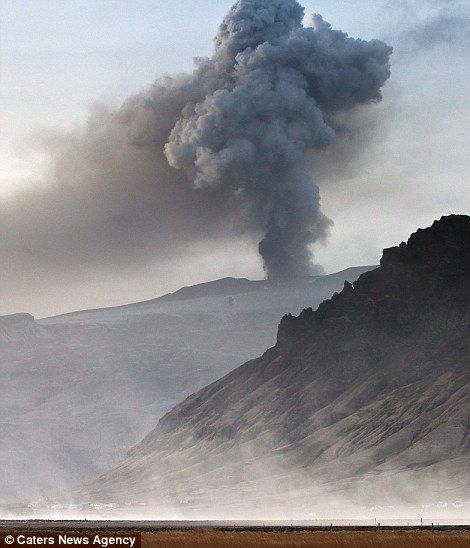 Skarphdinn snaps a picture of fellow dare-devil photographers hanging around the lip of a volcano, while lava rakes the sky, and a volcano is shown bubbling moodily

He added: ‘I remember one night while shooting the lightning the wind suddenly changed directions and the black cloud started to reach me.

‘I drove back from the area with dust in my mouth and nasty smell in the air. When I got away from the cloud, I shot some photos of the lightning.

‘They were striking almost to the exact spot where I was earlier in the night. Two people died in a tragic way when they got lost that night after observing the volcano.’

Mr Skarphedinn, from Reykjavik, Iceland, took his incredible photos during the volcanic eruptions in Fimmvorduhals and the notorious Eyjafjallajokull – the eruption which caused havoc across Europe two years ago.

Both eruptions occurred in the same area of the south coast of Iceland but with very different results.

The volcano in Fimmvorduhals was a friendly volcano with flowing red lava but the second blasted monster ash clouds through the skies shutting down European air space. 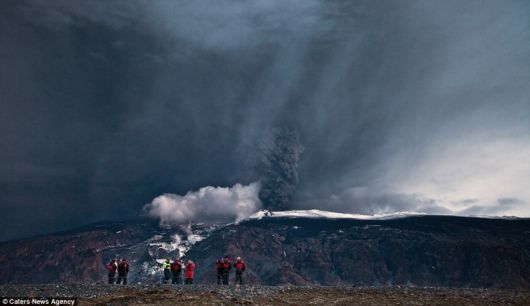 Safe distance? The 39-year-old photographer captures a group of men surveying the scene, with a volcano rumbling nearby 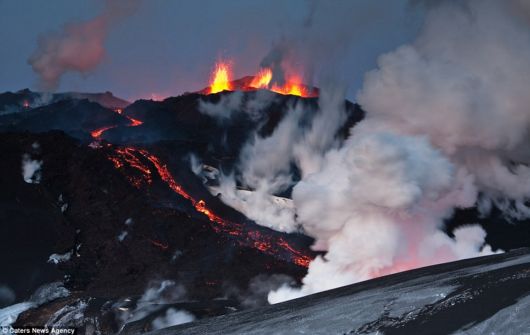 Fiery: With the night’s sky as a backdrop this volcano, and the lava which is cascading down its side, looks other-worldly

He added: ‘Eyjafjallajokull erupted in the middle of a glacier and caused a devastating ash plume volcano because it erupted deep under ice.

‘I went a number of times to see that volcano – usually for sunset and sunrise as well as at night to have a good view of the lightning in the ash plume and also observe the lava.’

Thrill-seeker Mr Skarphedinn is now planning his next fiery photo trip to Hawaii and other places for more amazing photography.

But for now he says when the next volcano in Iceland erupts he’ll be ready.

He said: ‘I’ll be prepared and ready to get back there to experience it all over again.

‘I got my first quality camera in 2007 and I’ve been passionate with landscape and aurora photography since – now this is my new favourite.

‘It is simply a must to be around the volcano shooting the scenes and I’m always working on taking the perfect photo.’ 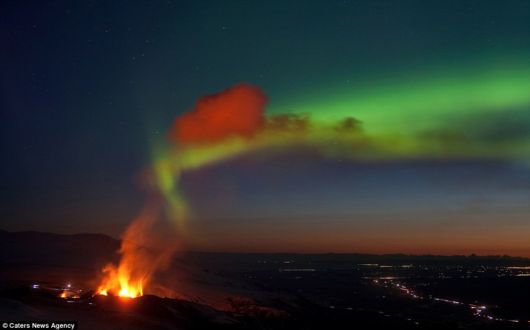 Northern Lights: The Icelandic photographer manages to capture the magical Aurora Borealis over the top of a flaming volcano 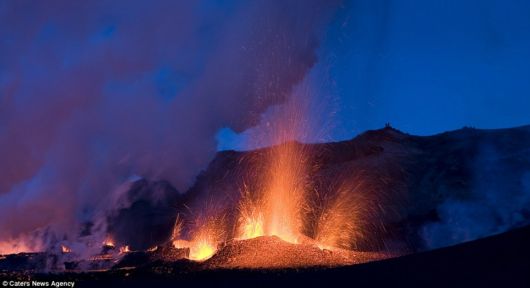 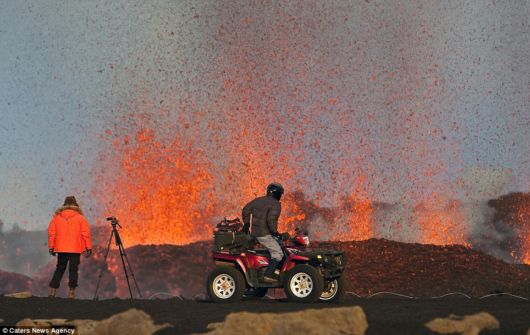 Danger: A couple of photographers look ready to move if the lava gets too close to them as it spits orange lava