This waterfall located at The Lakes Plitvice. This is a national park in the highlands of the eponymous Plitvice, Croatia, on the border with Bosnia and Herzegovina. Sixteen separate lakes (12 lakes upper cluster and 4 lakes below cluster), which is formed naturally tiered heights ranging from 636 m to 503 m. Water that comes out of the lowest lake then forming the Korana river.
Plitvice Lakes which is situated on karstic rocks, mainly dolomite and limestone, which form the special features. The lake is naturally fragmented by travertine dams, which is a deposit of moss, algae and bacteria. Travertine dam formation is increased by about 1 cm per year. The lake is also famous for its color changes from blue sky, green, blue or gray. This color change depends on the amount of minerals or organisms in the water and the elevation of the sun.
Park has been listed in UNESCO World Heritage List in 1979. After Opertion Storm, UNESCO listed the park is in the status of ?danger? on the List of World Heritage in Danger. With a variety of considerations, the government of Croatia set the status of de-mining efforts. In December 1998 UNESCO issued the status of endangered site to this national park. Today, Plitvice Lakes is one of the biggest tourist attractions in Croatia. In 2000, the park has been expanded by over 102 km ². 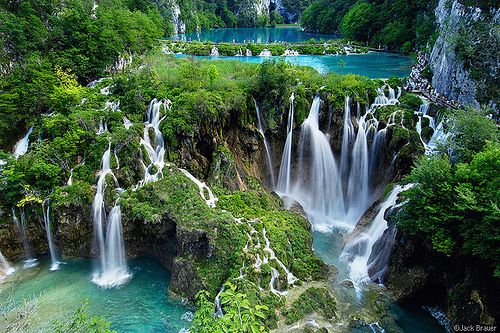 Ramona Falls is a waterfall on the upper Sandy River on the west side of Mount Hood, Oregon, United States. It is in scenic wilderness along the Pacific Crest Trail at elevation 3,576 feet (1,090 m). The falls are about 120 feet (37 m) tall overall consisting of a wall of cascades. 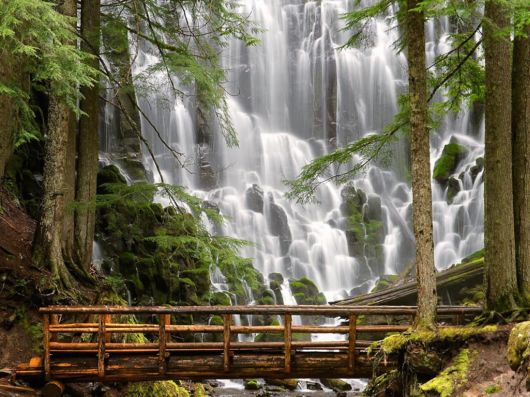 Iguazu is waterfall of the Iguazu River located on the border of Brazil, Paraquay and Argentina. The name Iguazu comes from the Guarani (y = water and ûasú = large). The legend of this waterfall is that a god planned to marry a native girl named Naipí, but she fled with his boyfriend Tarobá in the boat. In the anger of the god sliced the river to form a waterfall, to punish that two human fell there eternally. The first European to find this waterfall is the Conquistador Alvar Nunez Cabeza de Vaca from Spain in 1541.Iguaza are a combination of 275 waterfalls along the 2.7 km of the Iguazu River. Some of them fell from a height of 82 meters, mostly around 64 meters. Garganta del Diablo (Devil?s Throat), a U-shaped 82-meter height, width of 150 meters long and 700 meters is the most impressive one.
The waterfall can be reached from two major cities, each of which lies in both sides of this waterfall: through Foz Iguacu Parana state of Brazil and from the province of Misiones Puerto Iguazu in Argentina as well as from Ciudad del Este (Paraguay). This waterfall is set by both countries as national park. Iguazu National Park of Argentina and Iguaçu National Park of Brazil. Also designated as a UNESCO World Heritage Site in 1984 and 1986. 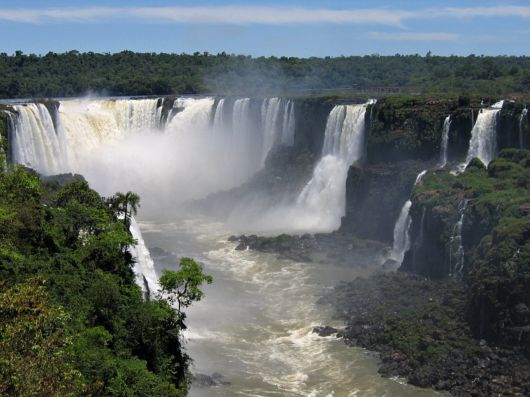 Detian waterfalls or Ban Gioc Falls, known in Vietnam as thác Ban Gi is a series of waterfalls in Quy Xuan River in China-Vietnam border, which lies at the Karst hills of Daxing County in Chongzuo city of Guangxi province in China, and in Trung Khanh District, Cao Bang province in the side of Vietnam, 272 km north of Hanoi.
Waterfall falling from a height of thirty meters. Scattered among the rocks and trees, water falls and the sound like thunder from the far distance.
Until now remains controversy regarding the border demarcation at this location as determined in 1999 VietNam-China Treaty on Land Borderline, originated from the unclear definition and placement of signs on the border in a legal document between France and the Qing government. One faction believes that this overall waterfall of Vietnam, that the boundary marker stones have been moved after the Sino-Vietnamese War in 1979. 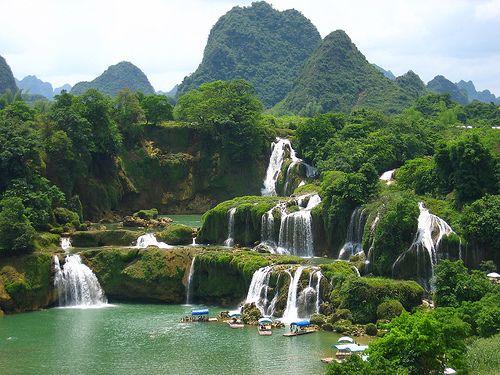 Mosi-oa-Tunya (the smoke that thunders) is the name used by locals. The name of Victoria Falls is the name given by the Scottish explorer, Dr.David Livingstone in 1855. Victoria Falls is located in southern Africa on the Zambezi River between the countries of Zambia and Zimbabwe.
This waterfall is part of two national parks, Mosi-oa-Tunya National Park in Zambia and Victoria Falls National Park in Zimbabwe, and also a UNESCO World Heritage Site. This waterfall is a major attraction in South Africa.
While it is neither the highest nor the widest waterfall in the world, it is claimed to be the largest. This claim is based on a width of 1,708 metres (5,604 ft) and height of 108 meters (360 ft), forming the largest sheet of falling water in the world. The falls? maximum flow rate compares well with that of other major waterfalls. 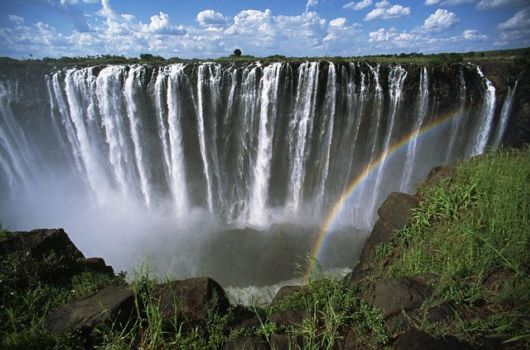 Havasu Falls is the second waterfall in the canyon. And It can be accessed from a trail on the right side (left side when heading upstream) of the main trail. The side trail leads across a small plateau and drops into the main pool. Havasupai is arguably the most famous and most visited of all the falls, and is considered one of the most photographed waterfalls in the world. The falls consist of one main chute that drops over a 120-foot (37 m) vertical cliff (due to the high mineral content of the water, the falls are ever-changing and sometimes break into two separate chutes of water) into a large pool.
The falls are known for their natural pools, created by mineralization, although most of these pools were damaged and/or destroyed in the early 1990s by large floods that washed through the area. A small man-made dam was constructed to help restore the pools and to preserve what is left. There are many picnic tables on the opposite side of the creek and it is very easy to cross over by following the edges of the pools. It is possible to swim behind the falls and enter a small rock shelter behind it. 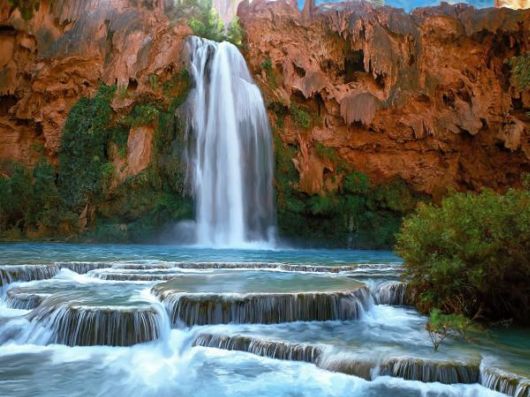 El Nicho Falls is located in Grupo Guamuhaya part of Sierra de Trinidad mountainous is the second highest point in Cuba Pico San Juan 1108 m about 46 km from Cienfuegos. At mountains of the El Nicho you can hike through the caves, water fall bathing and track the mountain?s exoticFlora & Fauna. Those interested in another kind of wildlife can go bird-watching in a protected sanctuary. The Tocororo lives in this mountain region, Cuban national bird, with beautiful, showy colors. 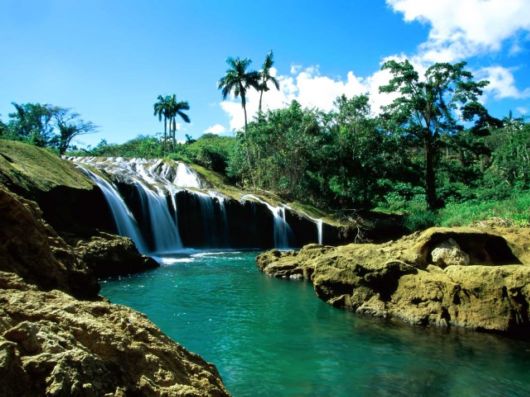 Salto Angel Waterfall or Angel Falls is the highest free falling waterfall in the world with a height of 979 meters (3212 feet) with no barriers fall around 807 meters (2647 feet). This waterfall is located in the Rio Caroni, Canaima, Venezuela.
Although first seen in the early 20th century by the explorer Ernesto de Santa Cruz, the waterfall was not known officially to the world until discovered by American aviator James Crawford Angel that was flying to find the location of a gold mine. In 1936, James Angel returned and landed his plane near a waterfall. The waterfall was named Angel Falls? to the memory of its discoverer, James Crawford Angel. Pemon Indian tribes called this waterfall as ?Auyan-tepui? (?Aiyan-tepui?) which means ?Mountain of Evil?. Its official elevation is in 1949. This waterfall is the most famous tourist attractions in Venezuela. 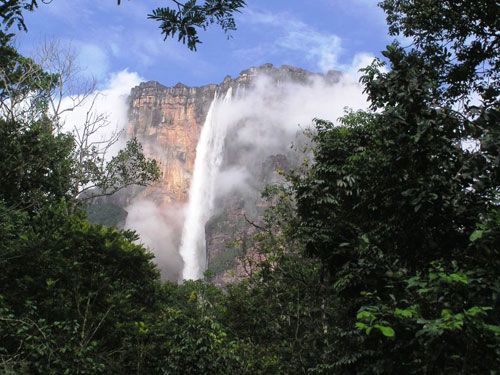 Niagara is a large waterfall on the Niagara River at the international border line between the US state of New York with the Canadian province of Ontario. This waterfall is about 17 miles (27 km) north northwest of Buffalo,New York and 75 miles (120 km) southeast of Toronto, Ontario.
Niagara is a group of three waterfalls. Those waterfalls are Horseshoe waterfall (sometimes referred to as Canada?s waterfall), America waterfall, and the smaller Bridal Veil waterfall separated by Luna Island from the main waterfall.
Although not too high, the Niagara waterfalls are very wide and most popular in the world. More than 6 million cubic feet (168,000 m3) of water per minute was dropped and this is the most powerful waterfall in North America.Niagara Falls is famous for its beauty and valuable as the use of hydro resources, a form of managing the balance between recreational, commercial, and industrial. 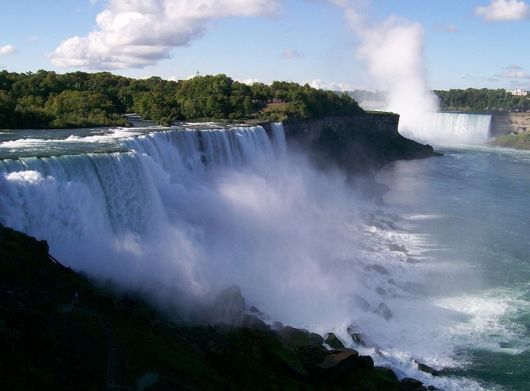