Cueva de los Verdes ? Walk and get into the volcanic tunnel of Cueva de los Verdes, It is not only one of the most interesting volcanic formations on the island, but is also one of the longest volcanic tube in the world of 6 km long. The municipality of Haría on the island of Lanzarote in the Canary Islands, Spain, and forms part of the vast volcanic landscape of the Monumento Natural del Malpaís de La Corona. Its formation is the result of the eruptive activity of La Corona Volcano. Dating back, according to geologists, some 3000 to 5000 years, which gave rise to an extensive underground volcanic tunnel over six kilometers long, running from the cone of the volcano down to the sea. Two of the most relevant Centers of Art, Culture and Tourism – "Cueva de los Verdes" and "Jameos del Agua" – are located inside the tunnel. 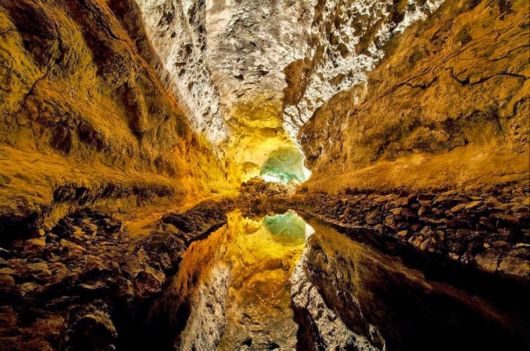 A volcanic tunnel is formed by the cooling and solidification of the superficial part of a lava flow in contact with the air, while the liquid magma underneath continues to flow. The partial collapse of the roof of a given section of the tunnel forms the structure known in Lanzarote as a "Jameo" – this is an opening in the earth which provides access to the other grottoes. The tunnel formed by La Corona Volcano is one of the longest and most interesting on the planet. There are 21 jameos dotted along its length. Over six kilometers of the tunnel have been explored; these run from the crater of La Corona before entering the sea in an underwater stretch of 1.5 kilometres known as the "Túnel de la Atlántida" or Tunnel of Atlantis. 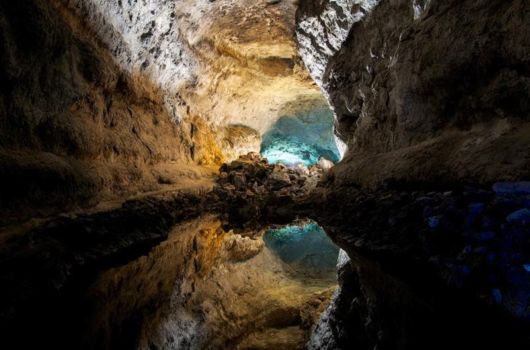 The cave is also famous for its concert hall which is located near the entrance and exit of the cave. The concert hall has about 15 to 20 rows with 26 seats in each row, allowing up to 500 people in the concert hall at once. In earlier centuries, inhabitants throughout Lanzarote hid in this cave to protect themselves from European pirates and Muslim slave raiders. 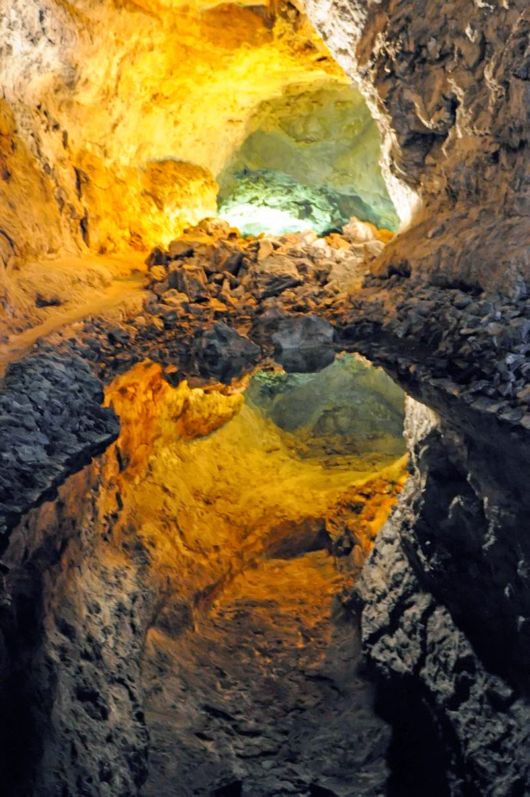 The caves are definitely worth a visit and if the molten wax-like rock isn’t enough to impress you, the secret of Cueva de los Verdes will be. The lowest part of the cave is used occasionally as a concert hall and is an impressive sight in itself.. 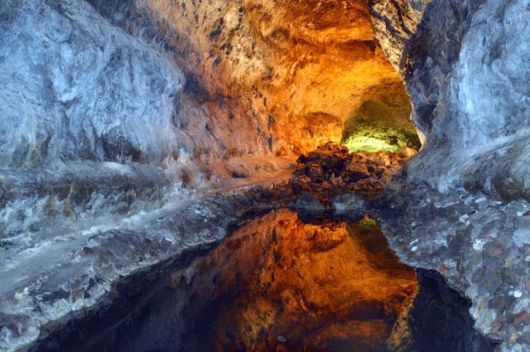 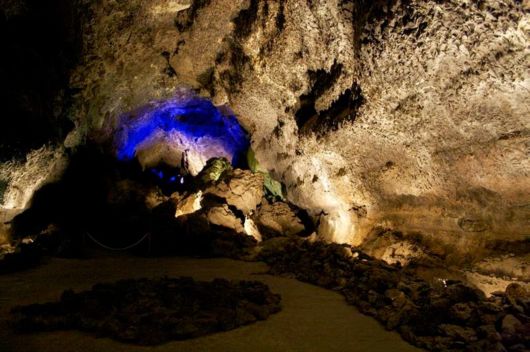 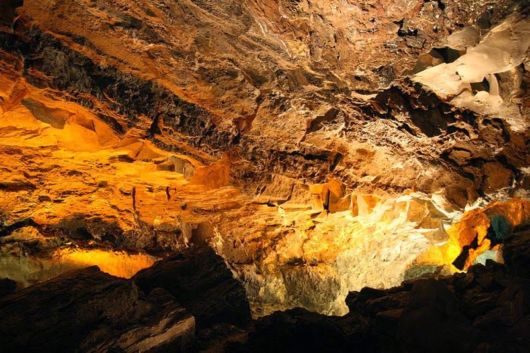 As with many cave systems, the Cueva de los Verdes has its own optical illusions, which you will be shown on the guided tour; which is the only way to see the Green Caves 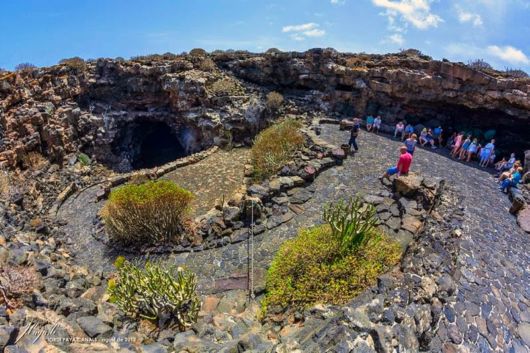 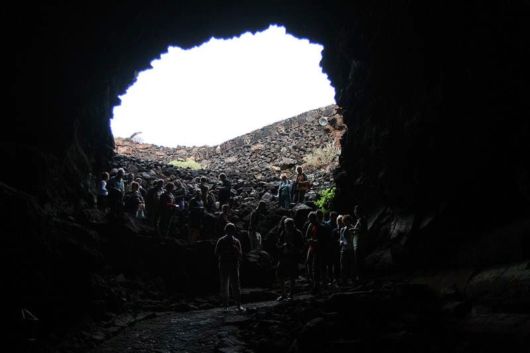 Unlike many tourist attractions, it is difficult to tell that there has been any human intervention in the cave structure. The main work has gone into an awesome lighting system which highlights the walls of the cave extraordinarily well. 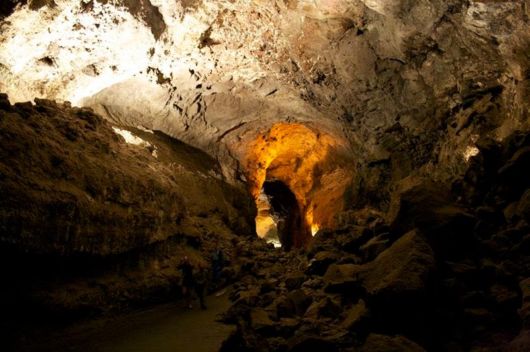 Lanzarote has suffered attacks from pirates and raiders throughout its history; which is one of the reasons that the inland town of Teguise, used to be the capital of the island. 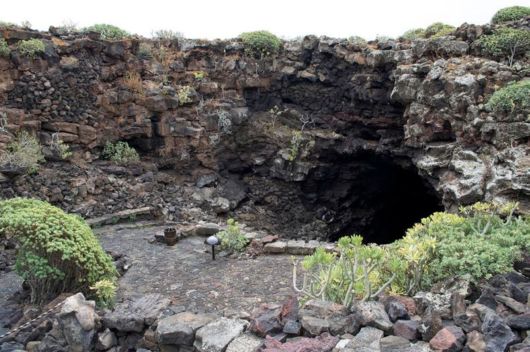 The Cuevas de los Verdes was an excellent place to hide for the local people, going as far back as the Guanches who were an aboriginal people who used to inhabit the Canary Islands. 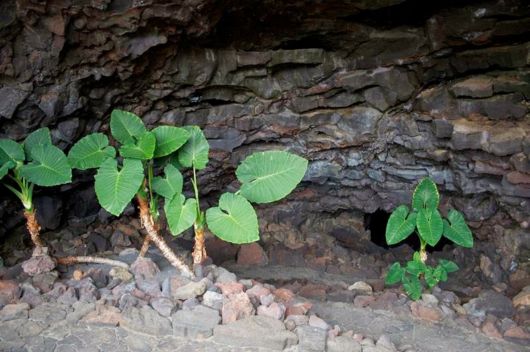 In fact there is actually a chamber within the tunnel which is known as ‘The Refuge’, because it was so often used for shelter.