In the depths of northeastern India, in one of the wettest places on earth, bridges aren’t built — they’re grown. 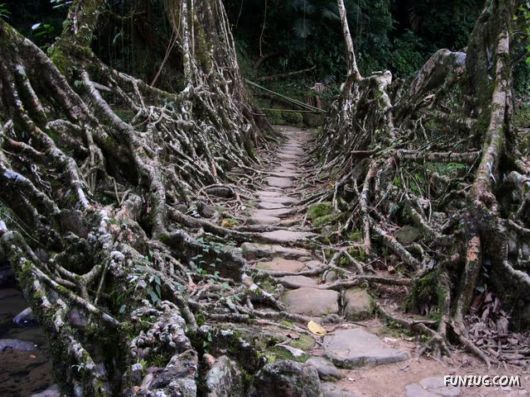 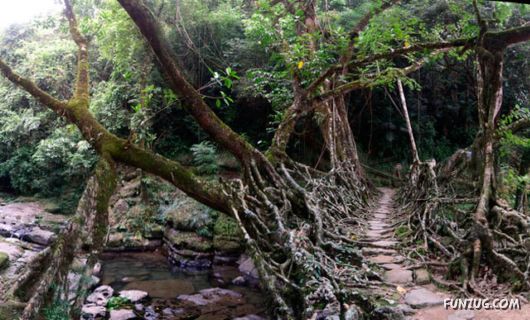 Grown from the roots of a rubber tree, the Khasis people of Cherapunjee use betel-tree trunks, sliced down the middle and hollowed out, to create "root-guidance systems." When they reach the other side of the river, they’re allowed to take root in the soil. Given enough time a sturdy, living bridge is produced. 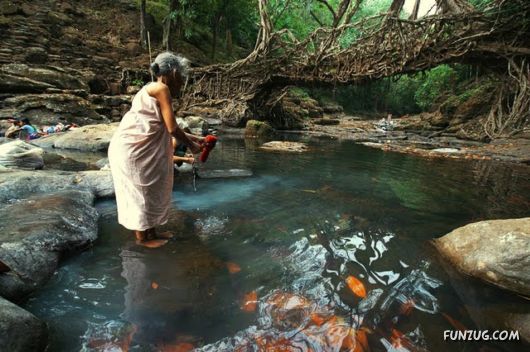 The root bridges, some of which are over a hundred feet long, take ten to fifteen years to become fully functional, but they’re extraordinarily strong. Some can support the weight of 50 or more people at once.

One of the most unique root structures of Cherrapunjee is known as the "Umshiang Double-Decker Root Bridge." It consists of two bridges stacked one over the other! 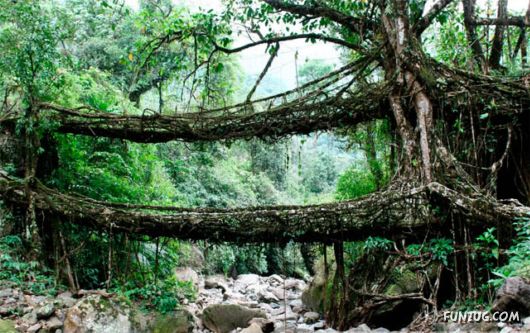 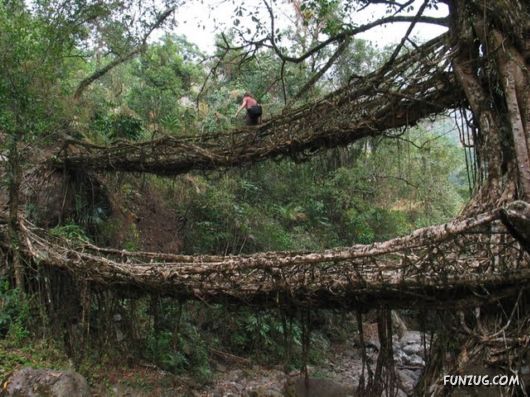 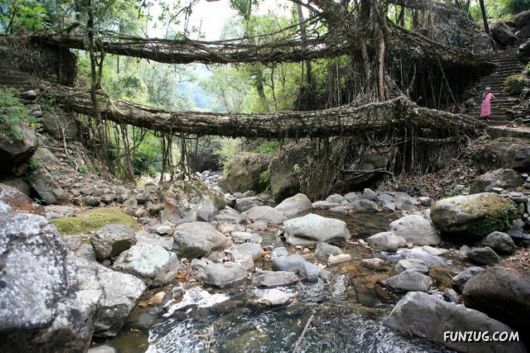 Because the bridges are alive and still growing, they actually gain strength over time, and some of the ancient root bridges used daily by the people of the villages around Cherrapunjee may be well over 500 years old. 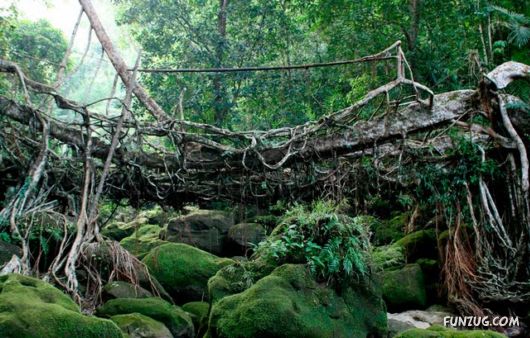 But these are not the only bridges built from growing plants. Japan too, has its own form of living bridges.

These are The Vine Bridges of Iya Valley….. 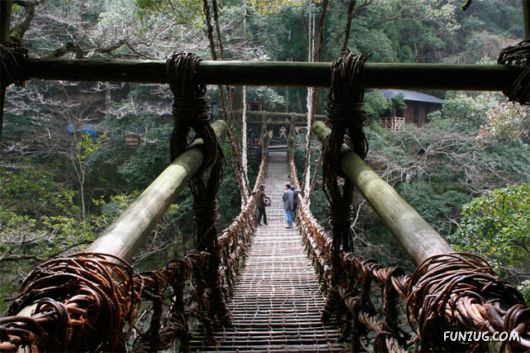 One of Japan’s three "hidden" valleys, West Iya is home to the kind of misty gorges, clear rivers, and thatched roofs one imagines in the Japan of centuries ago. To get across the Iya River that runs through the rough valley terrain, bandits, warriors and refugees created a very special – if slightly unsteady – bridge made of vines. 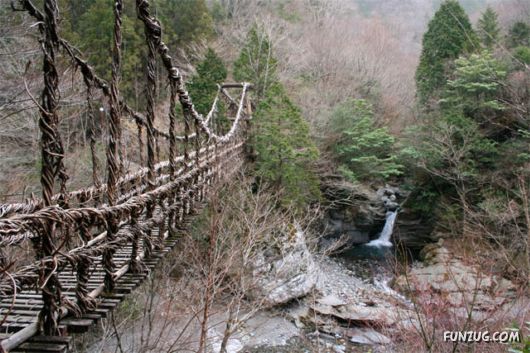 This is a picture from the 1880s of one of the original vine bridges. 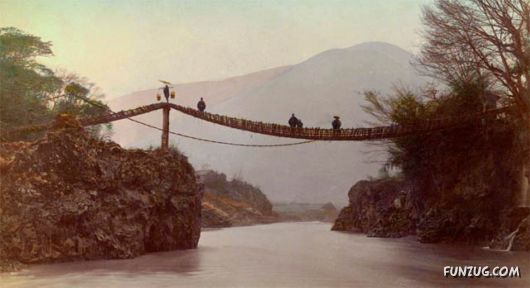 First, two Wisteria vines — one of the strongest vines known — were grown to extraordinary lengths from either side of the river. Once the vines had reached a sufficient length they were woven together with planking to create a pliable, durable and, most importantly, living piece of botanical engineering. 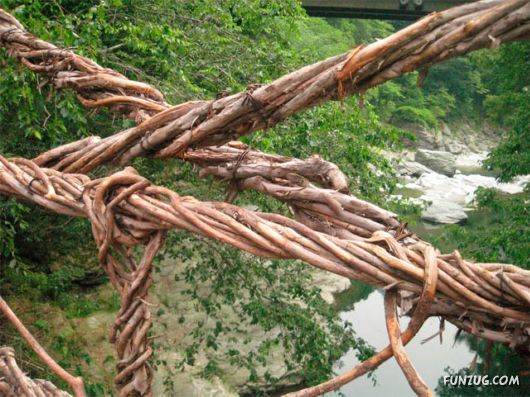 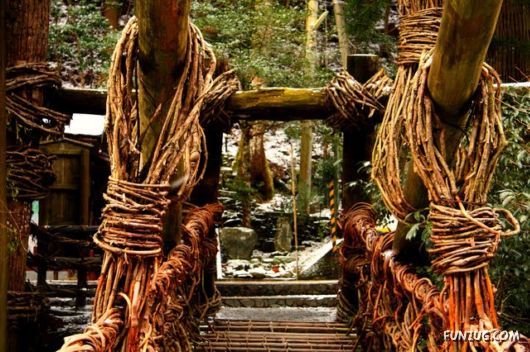 The bridges had no sides, and a Japanese historical source relates that the original vine bridges were so unstable, those attempting to cross them for the first time would often freeze in place, unable to go any farther.

Three of those vine bridges remain in Iya Valley. While some (though apparently not all) of the bridges have been reinforced with wire and side rails, they are still harrowing to cross. More than 140 feet long, with planks set six to eight inches apart and a drop of four-and-a-half stories down to the water, they are not for acrophobes. 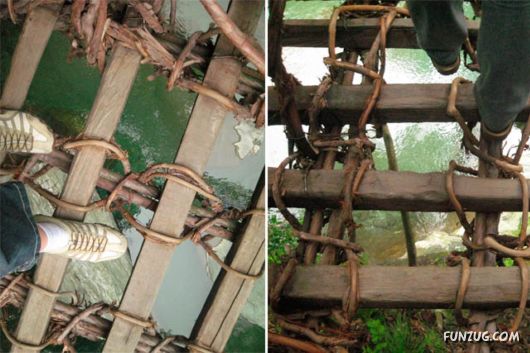 Some people believe the existing vine bridges were first grown in the 12th century, which would make them some of the oldest known examples of living architecture in the world. 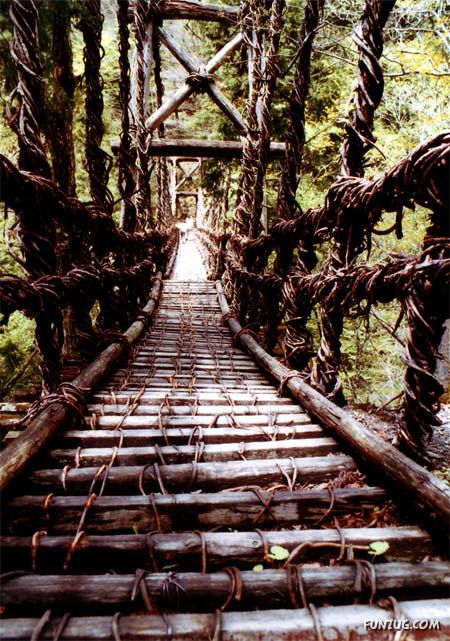