The Niagara Falls are massive waterfalls on the Niagara River, straddling the international border separating the Canadian province of Ontario and the U.S. state of New York. The falls are 17 miles (27 km) north-northwest of Buffalo, New York, 75 miles (120 km) south-southeast of Toronto, Ontario, between the twin cities of Niagara Falls, Ontario, and Niagara Falls, New York. 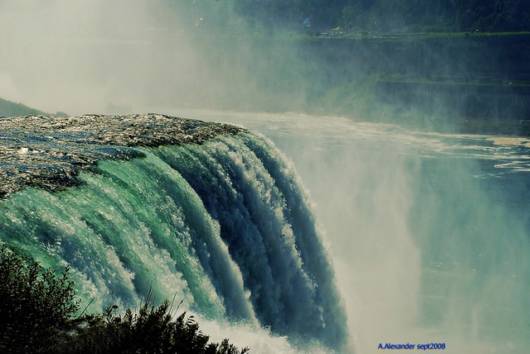 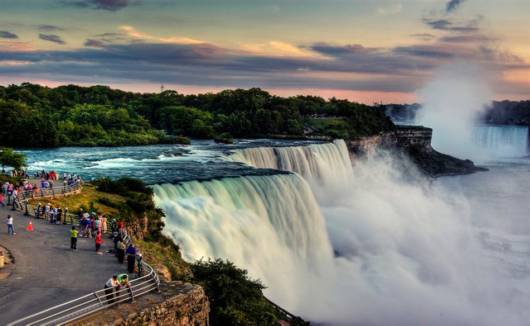 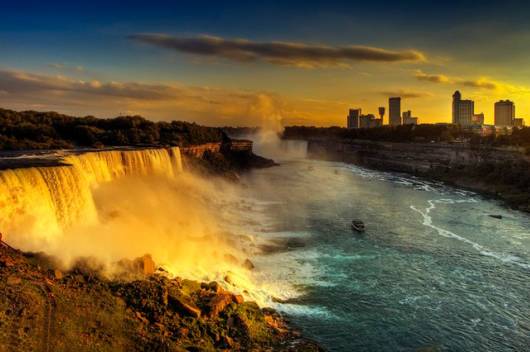 Niagara Falls is composed of two major sections separated by Goat Island: Horseshoe Falls, on the Canadian side of the border and American Falls on the United States side. The smaller Bridal Veil Falls also is located on the American side, separated from the main falls by Luna Island. Niagara Falls were formed when glaciers receded at the end of the Wisconsin glaciation (the last ice age), and water from the newly-formed Great Lakes carved a path through the Niagara Escarpment en route to the Atlantic Ocean. 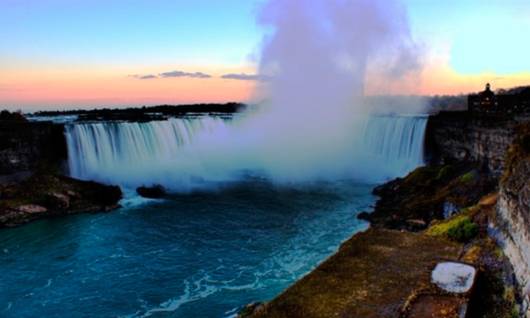 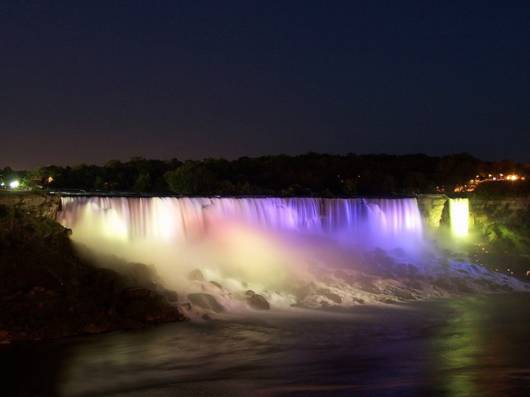 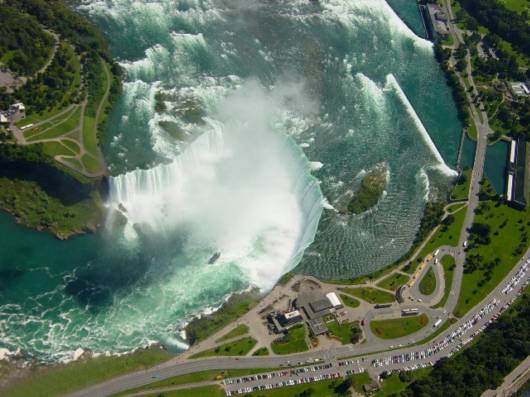 The Niagara Falls are renowned both for their beauty and as a valuable source of hydroelectric power. Managing the balance between recreational, commercial, and industrial uses has been a challenge for the stewards of the falls since the 1800s. 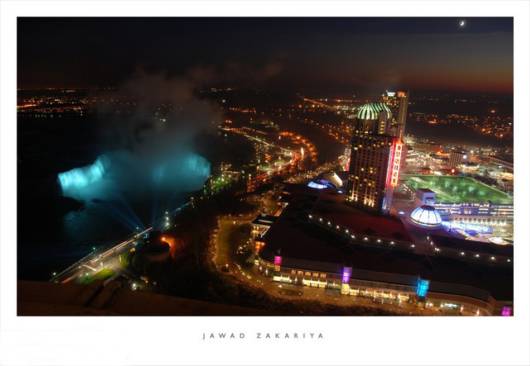 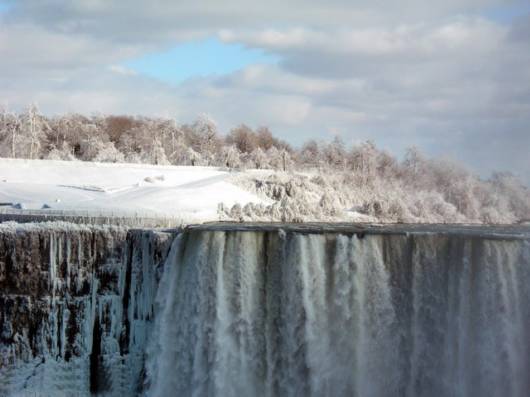 Peak numbers of visitors occur in the summertime, when Niagara Falls are both a daytime and evening attraction. From the Canadian side, floodlights illuminate both sides of the Falls for several hours after dark (until midnight). The number of visitors in 2008 is expected to total 20 million and by 2009, the annual rate is expected to top 28 million tourists a year. The oldest and best known tourist attraction at Niagara Falls is the Maid of the Mist boat cruise, named for an ancient Ongiara Indian mythical character, which has carried passengers into the whirlpools beneath the Falls since 1846. Cruise boats operate from boat docks on both sides of the falls. 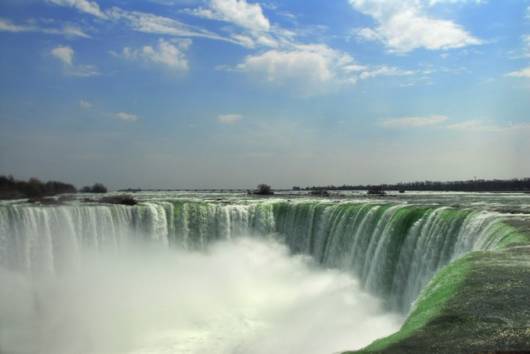 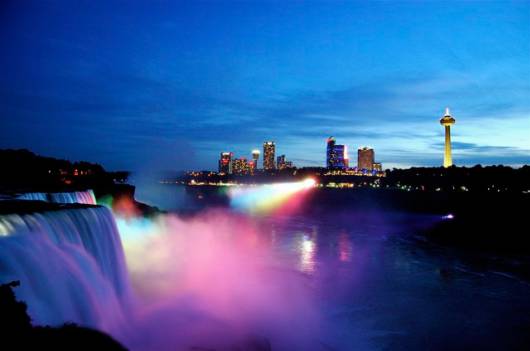 From the U.S. side, the American Falls can be viewed from walkways along Prospect Point Park, which also features the Prospect Point Park observation tower and a boat dock for the Maid of the Mist. Goat Island offers more views of the falls and is accessible by foot and automobile traffic by bridge above the American Falls. From Goat Island, the Cave of the Winds is accessible by elevator and leads hikers to a point beneath Bridal Veil Falls. Also on Goat Island are the Three Sisters Islands, the Power Portal where a huge statue of Nikola Tesla can be seen, and a walking path which enables views of the rapids, the Niagara River, the gorge, and all of the Falls. Most of these attractions lie within the Niagara Falls State Park. 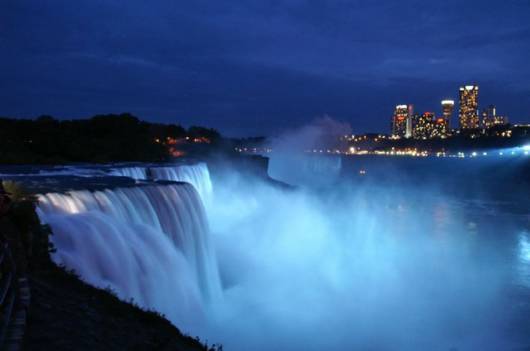 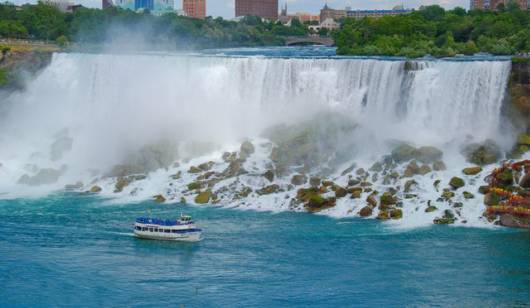 The Niagara Scenic Trolley offers guided trips along the American Falls and around Goat Island. Panoramic and aerial views of the falls can also be viewed from the Flight of Angels helium balloon ride, or by helicopter. The Niagara Gorge Discovery Center showcases the natural and local history of Niagara Falls and the Niagara Gorge. A casino and luxury hotel was opened in Niagara Falls, New York, by the Seneca Indian tribe. The Seneca Niagara Casino occupies the former Niagara Falls Convention Center. The new hotel is the first addition to the city’s skyline since completion of the United Way office building in the twenties. 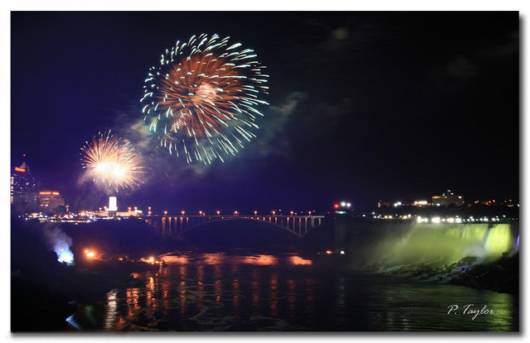 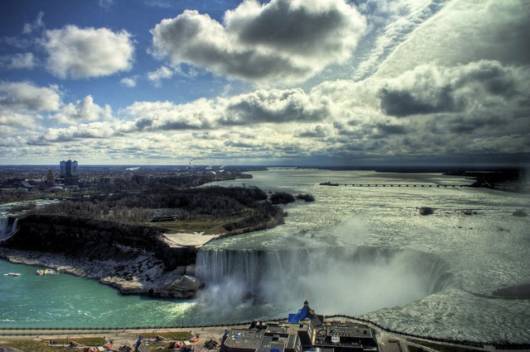 On the Canadian side, Queen Victoria Park features manicured gardens, platforms offering spectacular views of both the American and Horseshoe Falls, and underground walkways leading into observation rooms which yield the illusion of being within the falling waters. The observation deck of the nearby Skylon Tower offers the highest overhead view of the Falls, and in the opposite direction gives views as far as distant Toronto. Along with the Minolta Tower (formerly the Seagrams Tower, currently the Konica Minolta Tower), it is one of two towers in Canada with a view of the Falls. 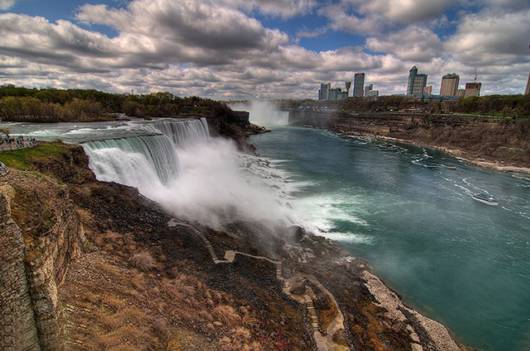 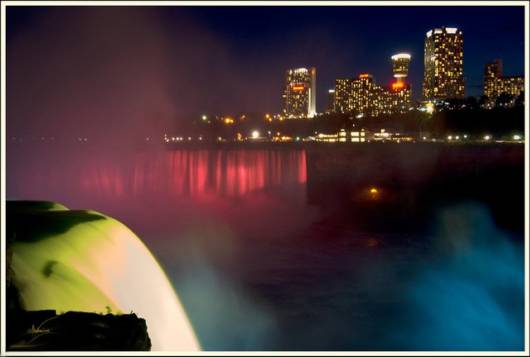 The Whirlpool Aero Car, built in 1916 from a design by Spanish engineer Leonardo Torres y Quevedo, is a cable car which takes passengers over the whirlpool on the Canadian side. The Journey Behind the Falls – accessible by elevators from the street level entrance – consists of an observation platform and series of tunnels near the bottom of the Horseshoe Falls on the Canadian side.

There are two casinos on the Canadian side of Niagara Falls, the Niagara Fallsview Casino Resort and Casino Niagara. The former is situated in the Fallsview Tourist Area, alongside many of the area’s hotels, whilst the latter is adjacent to Clifton Hill, on Falls Avenue, a major tourist promenade.