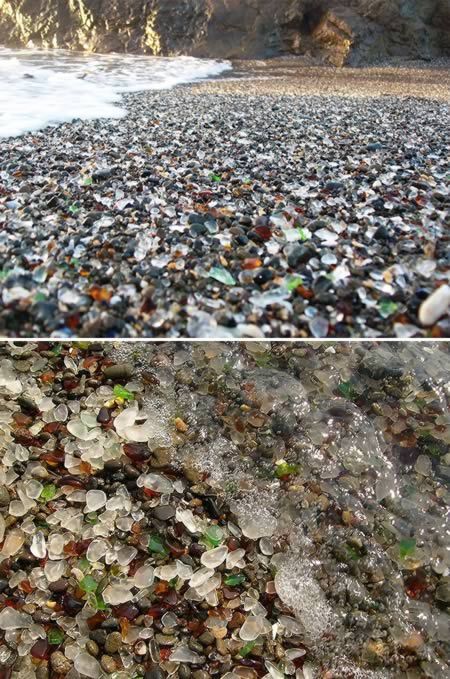 Glass Beach is a section of coastline in MacKerricher State Park in California. After World War II, it was used as a public dump for two decades until local officials halted the practice. Since that time, the waves have worn smooth the glass shards disposed on the shore. However sad the original cause, the result is quite pretty. 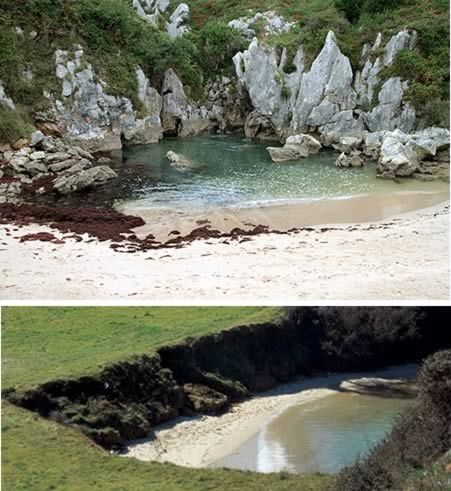 Gulpiyuri beach is near Llanes in Spain. Gulpiyuri’s name isn’t its only bizarre facet: this beach is found completely inland in a gorgeous little cove which looks like something out of a fantasy. The Cantabrian Sea bored through the earth to create this sandy spot, and though you can’t see the ocean, its waves to lap the shore just like any beach ? it’s odd, like a magical wave pool. 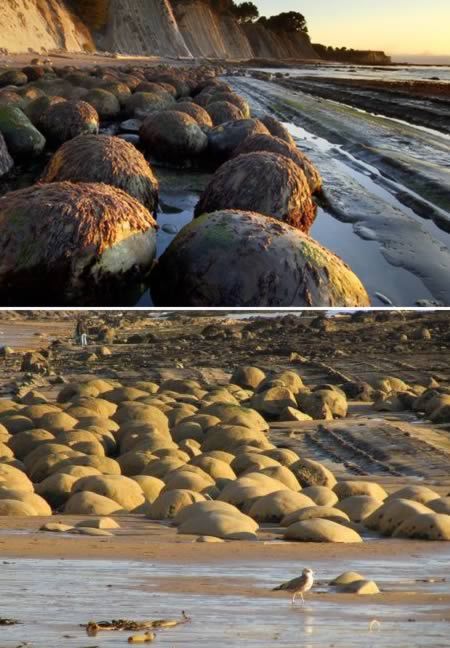 On the Californian coast is a town called Mendocino. Nearby is a coastal feature called Schooner Gulch, and this is where you can feast your eyes on what has become known as the ‘Bowling Ball Beach’. Thousands of rocks appear to have gathered together to defy the tides like an army of small boulders. The weird thing is that these boulders are uniform in size and shape, as well as in their spacing, though man has nothing to do with it.

The explanation is simple and purely geological in nature. Technically called concretions, these hard spheres are composed of materials far more resilient than the Cenozoic mudstone that once surrounded them. Over millions of years, this has eroded away under the constant onslaught of the Pacific Ocean, forming the cliffs that line the shore behind the beach and leaving the tougher ‘bowling balls’ behind. 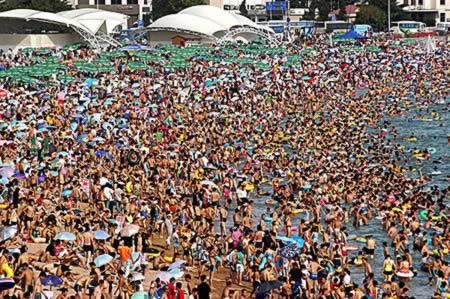 Reputed to be the largest sandy beach in Asia, world’s probably number one bathing beach is situated on Huiquan Bay in Qingdao, Shandong Province. Also called Huiquan Bathing Beach, this beach is noted for its clear water, mild waves and soft sand. Even in winter this place is crowded with keen swimmers. 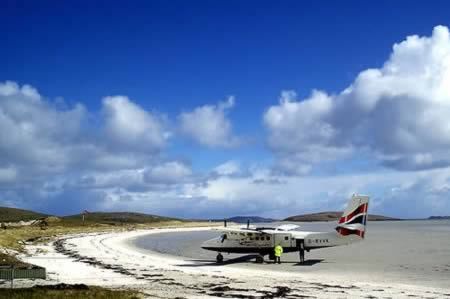 Barra Airport is probably the only airport in the world where planes land on the beach. BRR is situated in on the wide beach of Traigh Mhor, on Barra island, in the Outer Hebrides, Scotland. If you want to fly here commercially you will want to book with British Airways, which flies to Barra from Glasgow and Benbecula.

The airport is literally washed away by the tide once a day, and if you arrive on a late afternoon flight, you may notice a couple of cars in the parking lot with their lights on, which provides pilots some added visibility, since the airport is naturally lit. Needless to say you probably don’t want to hang out at Barra Airport beach, unless you are a aviation junkie, in which case Barra Airport has a fool proof system, as sign that reads: "Keep off the beach. When the windsock is flying and the airport is active." 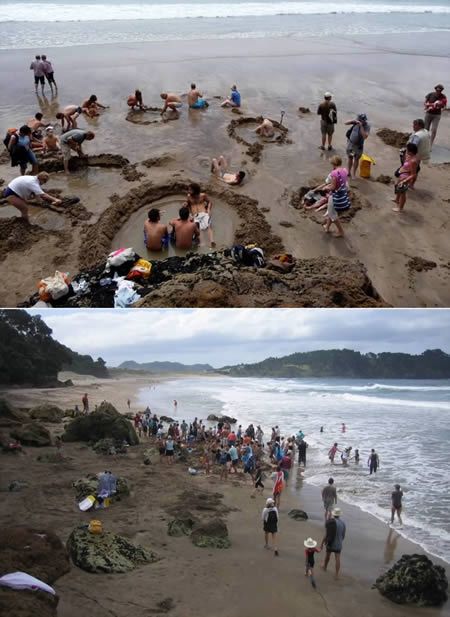 Hot Water Beach is a popular geothermal attraction in New Zealand. This unusual beach attracts 130,000 visitors each year. The hot water can reach 64ºC (147ºF), but you’ll have to dig a hole to enjoy it. These underground water reservoirs are formed by volcanoes as it reaches the surface. It’s just the perfect location for a nice hot bath. Don’t forget to bring some digging instruments and a bucket. 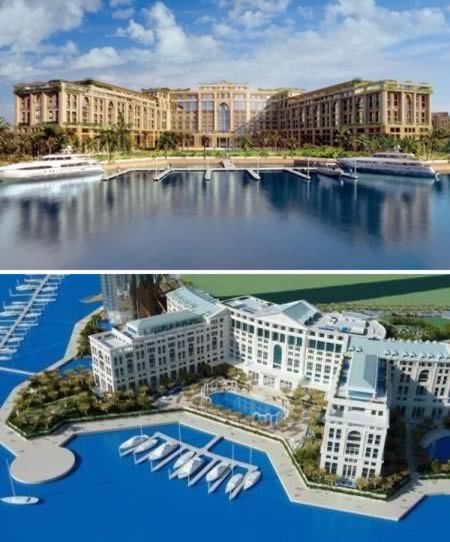 The Palazzo Versace Dubai property development is now 80 percent complete, according to the Emirates Sunland Group, the developer behind the £400 million project. As a world premier, the hotel will have the first ever refrigerated beach which will include a system of heat-absorbing pipes built under the sand and giant wind blowers, designed to keep tourists cool in the searing 40-50C heat. 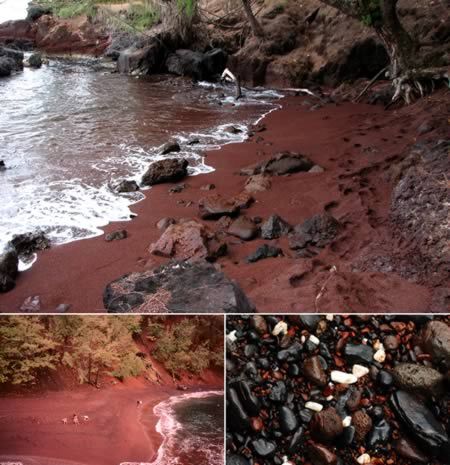 The beach is located south of Hana Bay and it’s also known as the Red Sand Beach. The trail leading to the beach is on a cliff edge and visitors should be very careful. Water shoes are recommended. The red color of the sand is given by a nearby cinder cone hill surrounding the bay. Swimming here is a different experience from everything you’ve tried before, just be aware of currents and don’t swim behind the lava sea wall. Because the beach is so secluded, nudism is not uncommon. 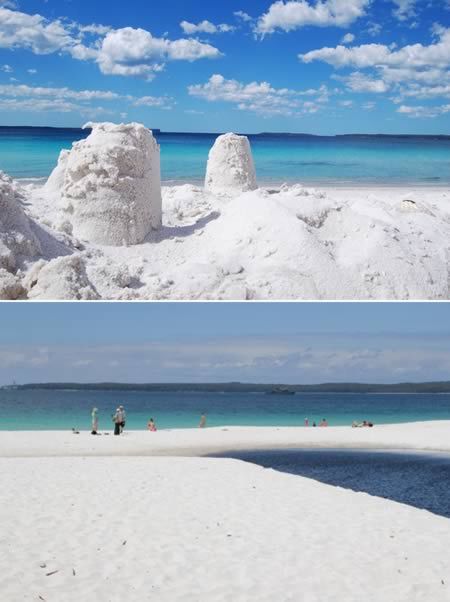 There’s a quiet spot on the NSW South Coast that deserves loud acclamation, Tony Grantham discovers. At first glance, Jervis Bay is not the sort of place to inspire thoughts of world records and extravagant claims. But for a quiet spot it has big tickets on itself, though to be fair, the claims are fully justified. It has an entry in the Guinness Book of Records as having the whitest sand in the world (officially at Hyams Beach, though many others around there are similarly blessed) and the astonishing fact that the bay is at least six times bigger in volume and four times bigger in area than Sydney Harbour. 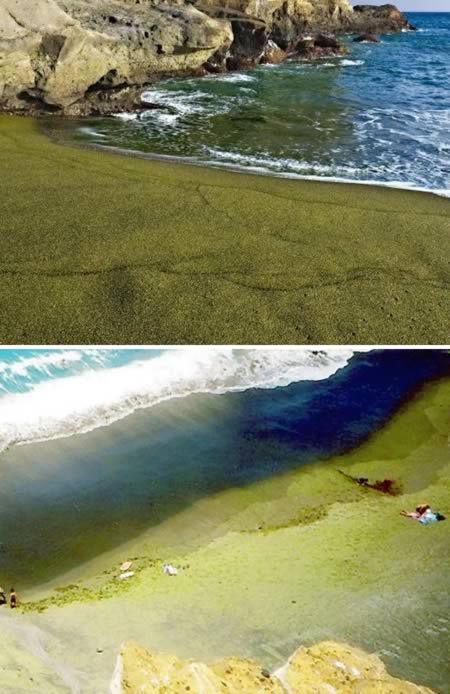 Papakolea Beach is a green sand beach located at South Point, in the Kau district of the Island of Hawaii. One of only two green sand beaches in the world, the other being in Guam, the beach gets distinctive coloring from olivine crystals found in a nearby cinder cone.