Craters of extinct and passive volcanoes are circular depressions in the ground caused by ancient volcanic activities. It is typically a basin, circular in form within which occurs a vent (or vents). Because of their inaction these craters are mostly suffered many changes caused by atmospheric and human factors. Unusual and beautiful volcanic cones, traces of human activity, lush vegetation and colorful crater lakes are the main reasons why many tourists visit these extraordinary destinations. 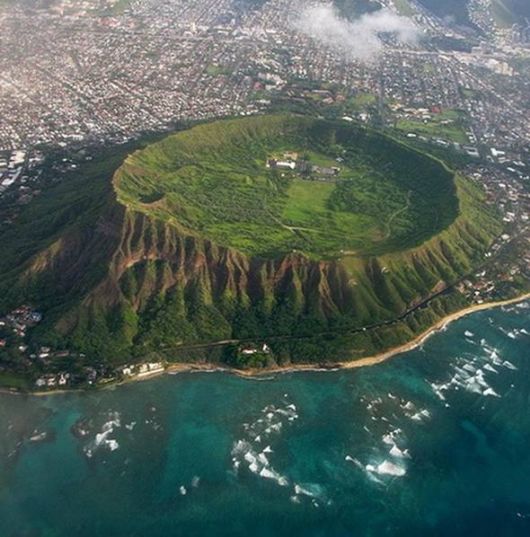 Diamond Head is the name of a volcanic tuff cone on the Hawaiian island of O?ahu. Its name was given by British sailors in the 19th century, who mistook calcite crystals embedded in the rock for diamonds. This crater is a defining feature of the view known to residents and tourists of Waikiki alike. 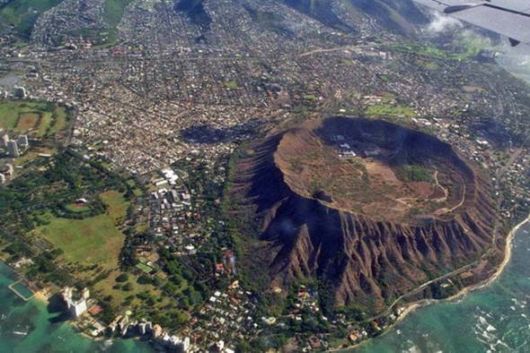 The volcanic tuff cone is a United States State Monument. While part of it serves as a platform for antennas used by the U.S. government and is closed to the public, the crater’s proximity to Honolulu’s resort hotels and beaches makes the rest of it a popular destination. 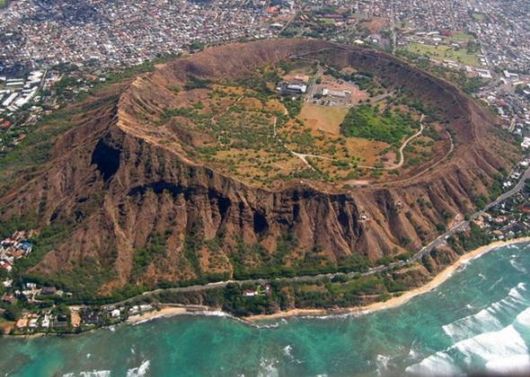 The interior was the home to Fort Ruger, the first United States military reservation on Hawaii. Only a National Guard facility remains in the crater. An FAA air traffic control center was in operation from 1963 to 2001. 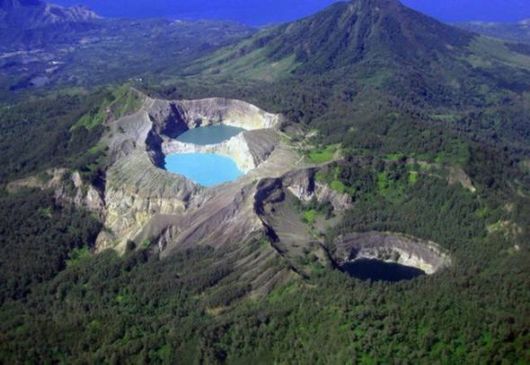 Kelimutu is a volcano, close to the small town of Moni in central Flores Island of Indonesia. The volcano contains three striking summit crater lakes of varying colors. Tiwu Ata Mbupu (Lake of Old People) is usually blue and is the westernmost of the three lakes. 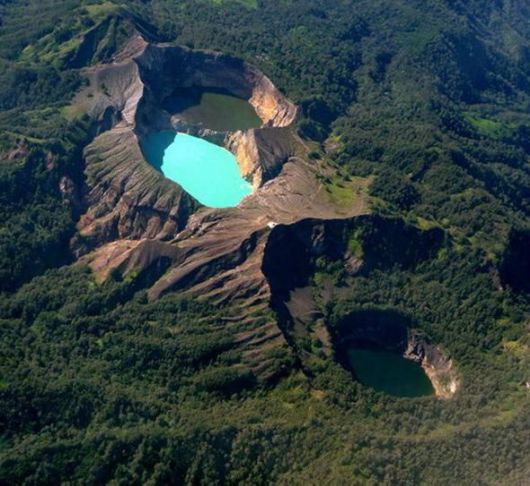 The other two lakes, Tiwu Nuwa Muri Koo Fai (Lake of Young Men and Maidens) and Tiwu Ata Polo ( Enchanted Lake) are separated by a shared crater wall and are typically green or red respectively. The lake colors vary on a periodic basis. Subaqueous fumaroles are the probable cause of active upwelling that occurs at the two eastern lakes. 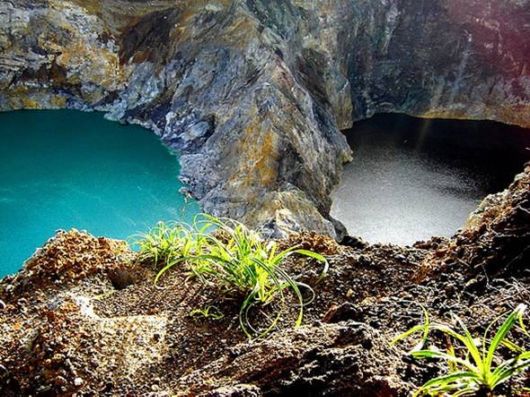 The visitor is never quite sure what color the lakes will be when they reach the top as they vary significantly. Unlike other crater lakes where the color variation can be predicted, this is not the case with these three lakes. The colors you see here are blue, green and black (and they predominate) yet the lakes also change to white, red and blue too. 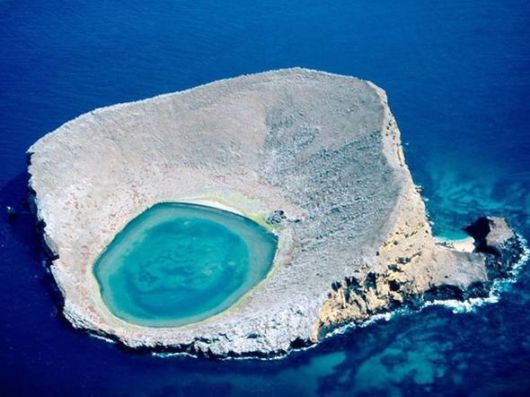 This wonderful islet is located in Rocas Bainbridge – a chain of volcanic cones off the southeastern coast of Santiago Island, Galapagos. 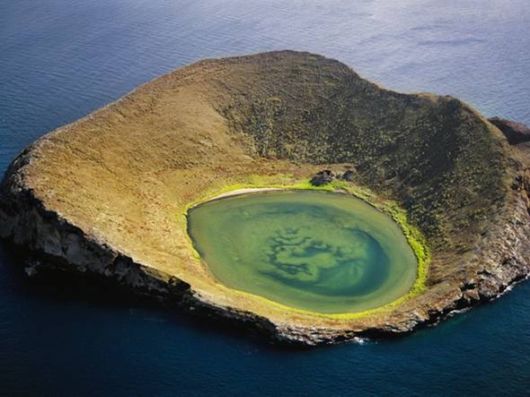 Turquoise lake nestled in the crater of this extinct volcano is a shallow saltwater lake. It is a meeting place for a large number of flamingos, who come here to feed. 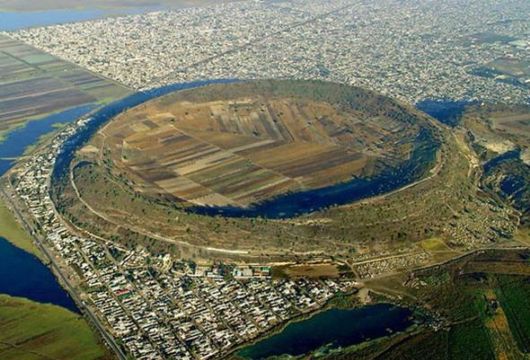 Xico volcano sits at the extreme southern end of the Mexico City megalopolis. For a geologically significant chunk of time, this area was underwater, drowned by Lake Chalco. The lake began to dry out in the 1300s, and Aztec fishermen settled along its coastline hereabouts. In the nineteenth century, the government drained the lake entirely; the fishermen were awarded communal land grants and told to become farmers 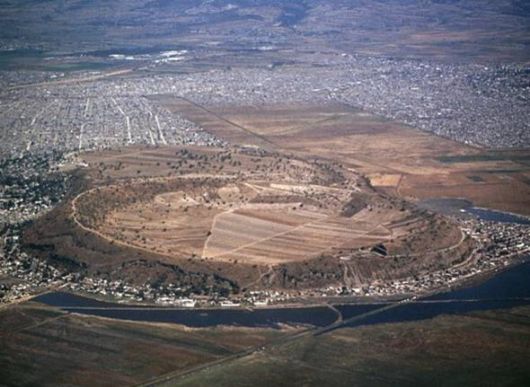 Farming became intensive in the 1970s, when corporate agriculturists and desperate landless peasants struck illegal or quasi-legal deals with the communal organizations and wrested control of the rich volcanic soil. Thousands and thousands of families poured into the region, hoping for work. Farmers climbed over the rim of the volcano and plowed fields inside the crater. Xico the town sprawled right up to the ramparts of Xico the crater and appears likely to soon engulf it; in 2005, the population of the municipality was 330,000. 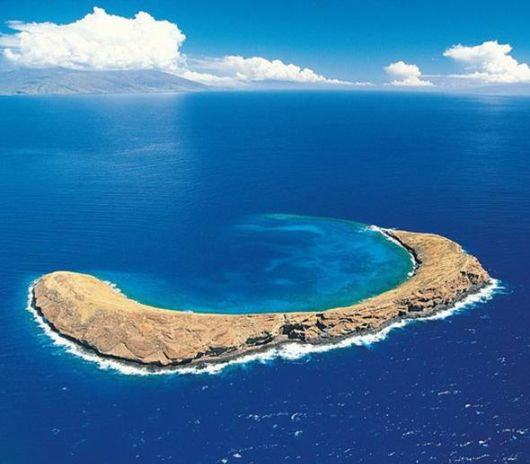 Molokini is a crescent-shaped, partially submerged volcanic crater which forms a small islet located in Alalakeiki Channel between the islands of Maui and Kaho?olawe, part of Maui County in Hawai?i. It has an area of 23 acres (93,169 sq m), a diameter of about 0.4 miles (0.6 km), and is located about 2.5 miles (4.0 km) west of Makena State Park and south of Ma?alaea Bay. It is a popular tourist destination for scuba diving, snuba and snorkeling. 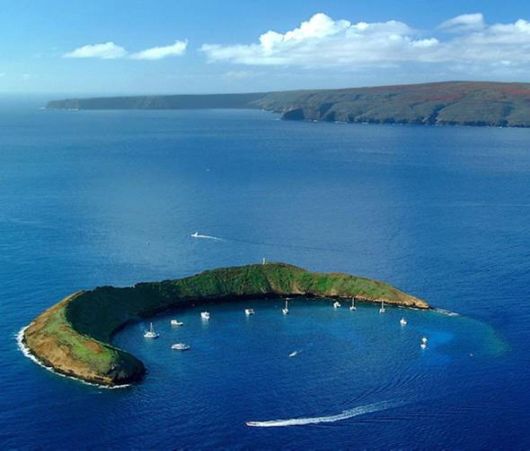 This place is one of the top 10 dive spots in the world. Molokini’s crescent shape protects divers from waves and the channel’s powerful currents. The crater houses a lush reef with excellent visibility as deep as 150 feet (46 m). Molokini is home to about 250 species of fish, many endemic. The islet is a Hawaii State Seabird Sanctuary. 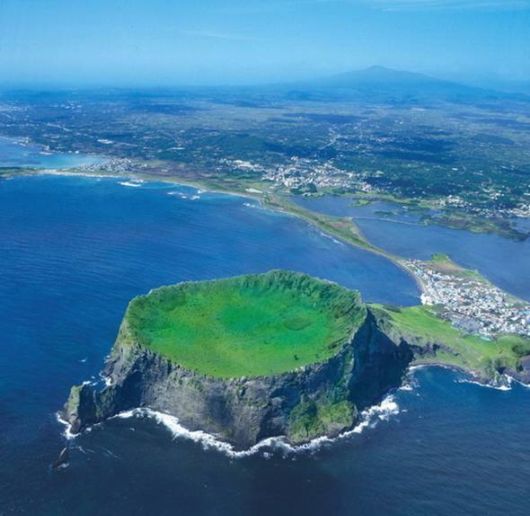 Seongsan Ilchulbong, also called ?Sunrise Peak?, is an archetypal tuff cone formed by hydrovolcanic eruptions upon a shallow seabed about 4 thousand years ago. 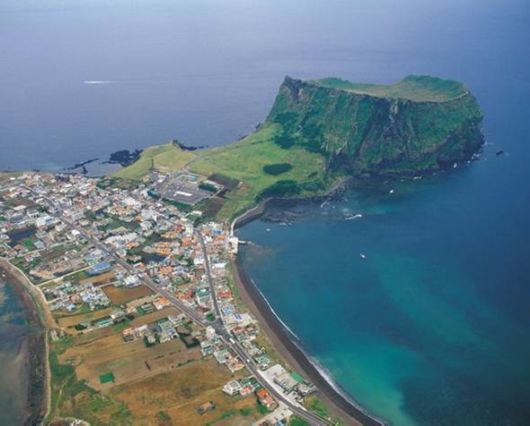 Situated on the eastern seaboard of Jeju Island and said to resemble a gigantic ancient castle, this tuff cone is 182 meters (600 ft) high, has a preserved bowl-like crater and also displays diverse inner structures resulting from the sea cliff. 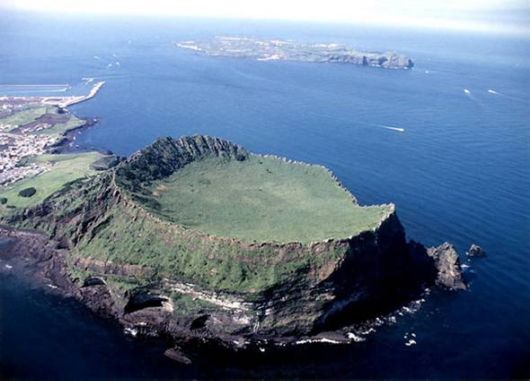 These features are considered to be of geologic worth, providing information on eruptive and depositional processes of hydromagmatic volcanoes worldwide as well as past volcanic activity of Seongsan Ilchulbong itself. This volcanic crater has a lush vegetation and is home to 6 rare plant species. 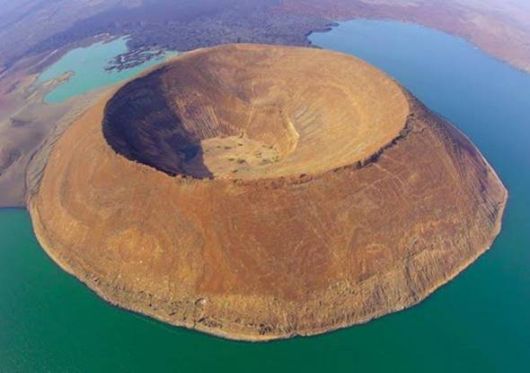 Nabiyotum Crater is located in the south of Lake Turkana in Kenya – the world’s largest alkaline lake. Because of its beautiful and unusual appearance, this crater represents a geological wonder of the lake 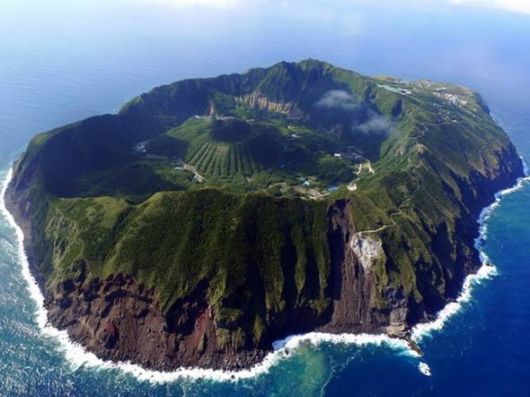 Aogashima is a volcanic Japanese island in the Philippine Sea, administered by Tokyo and located approximately 358 kilometres (222 mi) south of Tokyo. It is the southernmost and most isolated inhabited island of the Izu archipelago. 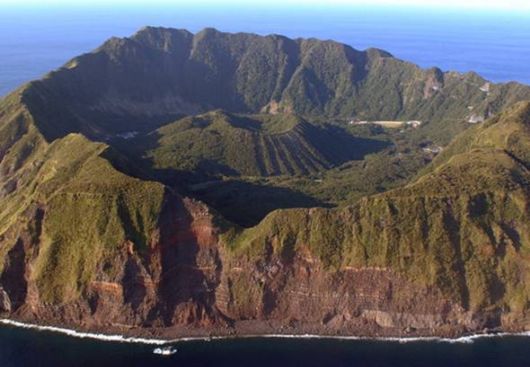 The biggest attraction is Aogashima?s double volcano. The island itself is a giant volcanic crater, and within that crater there?s another, smaller volcano 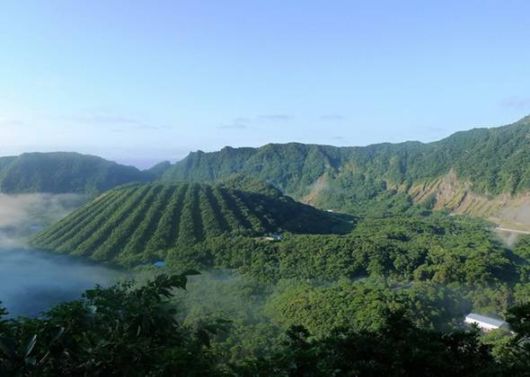 The smaller cone is located within the larger volcanic cone Link Aogashima is a complex volcanic island 3.5 km (2.2 mi) in length with a maximum width of 2.5 km (1.55 mi). The island is surrounded by very steep rugged cliffs of layered volcanic deposits. The southern coast also rises to a sharp ridge forming one edge of a caldera named Ikenosawa with a diameter of 1.5 km (0.9 mi). The caldera dominates the island, with one point on its southern ridge, Otonbu with a height of 423 metres (1,388 ft), as the island?s highest point. The caldera is occupied by a secondary cone named Maruyama. 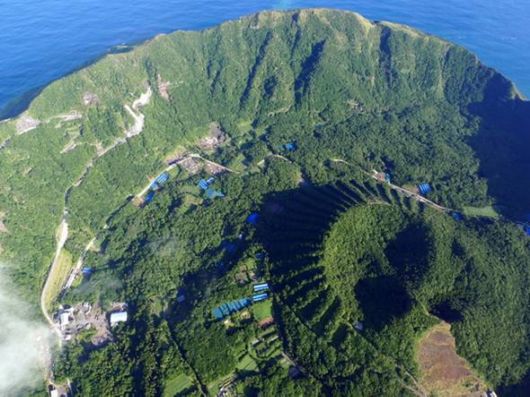 One part of the village is located in the crater Link The village of Aogashima administers the island under Hachijo Subprefecture of Tokyo Metropolis. As of 2009, the island’s population was 205. Aogashima is also within the boundaries of the Fuji-Hakone-Izu National Park. 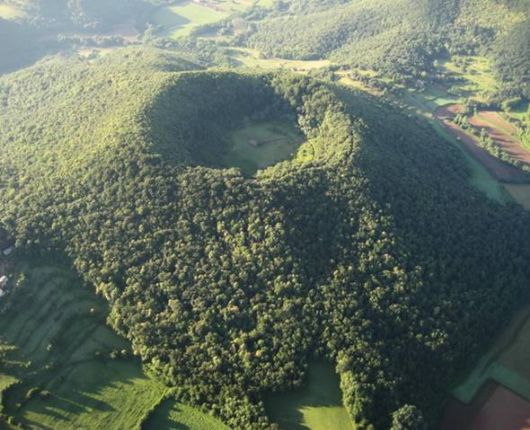 The Santa Margarida Volcano is a volcano in the comarca of Garrotxa, Catalonia, Spain. The volcano has a perimeter of 2 kilometers (1.25 mi) and a height of 682 meters (2.240 ft) and is part of the Garrotxa Volcanic Zone Natural Park. The hermitage of Santa Margarida, after which the volcano was named, is inside the crater of the volcano. The building was destroyed in 1428 during the 1428 Catalonia earthquake and rebuilt in 1865 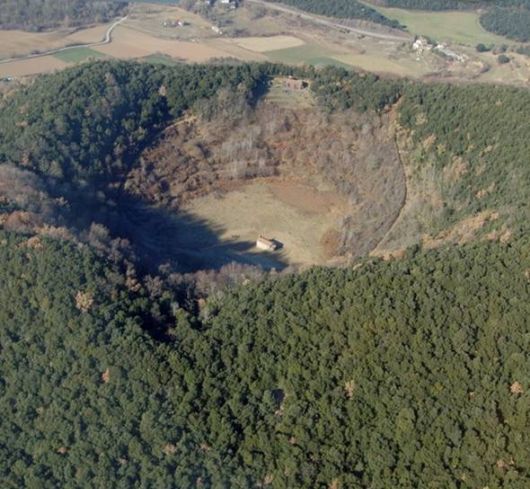 Situated in the center of a dormant volcano in Catalonia, the crater seems to open up to reveal a tiny stone shack. There is not a single building in the depressed area, just the hermitage. Covered in dense vegetation on all sides, the shack is bizarrely situated on flat arid land in the middle of the formation. 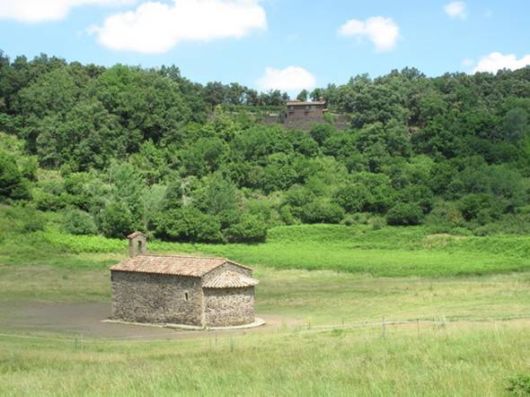 The region is well known for its volcanic zone and is regularly visited, but there is almost no information on the hermitage. Travelers can only hope the volcano doesn’t suddenly erupt, leaving the world with no knowledge and no remains of this unusual site. 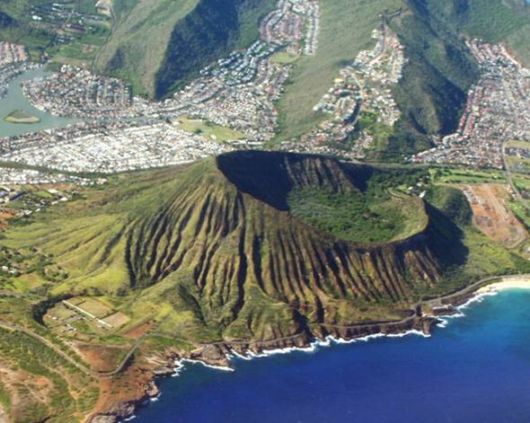 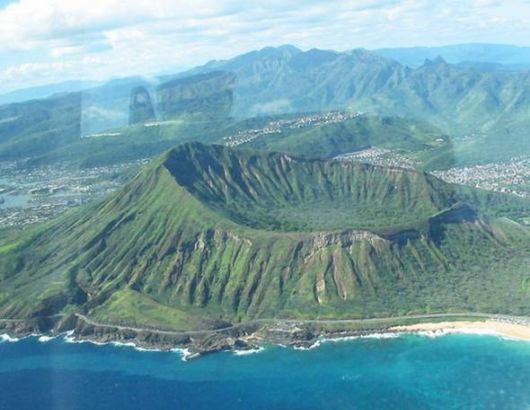 Within the crater are horse stables and the Koko Crater Botanical Garden specializing in cacti and succulents. Botanical garden has an area of 60 acres. The hot, dry climate here makes this garden the ideal location for the dryland collections of the Honolulu Botanical Gardens.

Extra: Man-Made Crater as an Expression of Art ? Ireland 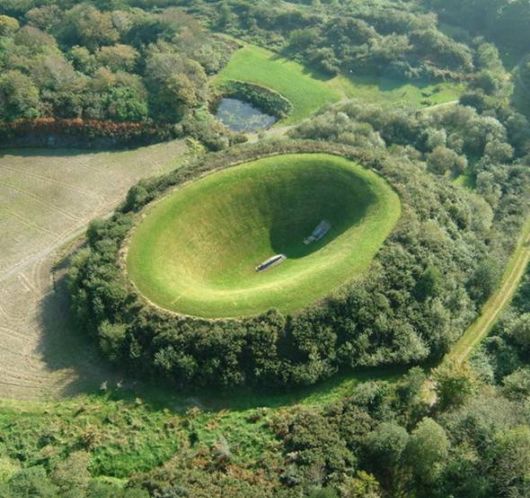 Liss Ard Gardens Resort (southern Ireland) includes a magnificent ‘Crater’ – designed by James Turrell, the extraordinary American artist who is world-renowned for his works on the theme of ‘Light’, and the Swiss architect Gert Burla. The Crater was created for the Irish skies to be appreciated by the spectators lying on the stone structures at the bottom – the dome-effect that is created in the elliptical frame is truly an unforgettable experience.