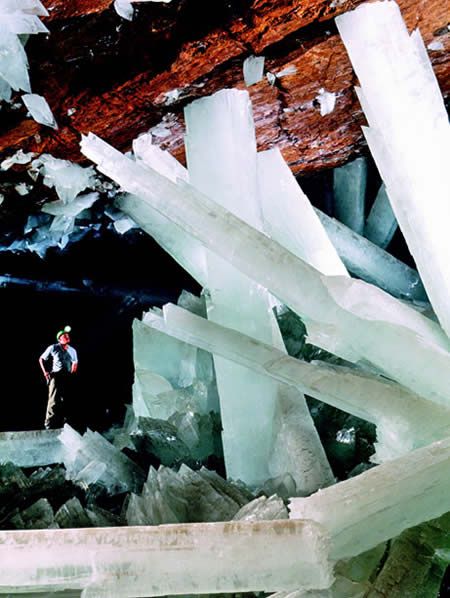 Known as ?the Sistine Chapel of crystals,? Mexico?s Cueva de los Cristales (Cave of Crystals) contains some of the world?s largest known natural crystals?translucent beams of gypsum as long as 36 feet (11 meters). The cave is 950 feet (290 meters) underground. The Naica mining complex, which yields lead, zinc, copper, silver, and gold, zigzags nearly half a mile underground (760 meters). Deep inside Naica mountain, the Cave of Crystals is a horseshoe-shaped cavity in limestone rock about 30 feet (10 meters) wide and 90 feet (30 meters) long.

Volcanic activity that began about 26 million years ago created Naica mountain and filled it with high-temperature anhydrite gypsum. When magma underneath the mountain cooled and the temperature dropped, the anhydrite began to dissolve. The anhydrite slowly enriched the waters with sulfate and calcium molecules, which for millions of years have been deposited in the caves in the form of huge selenite gypsum crystals. 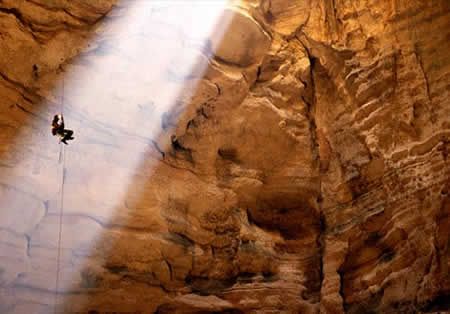 Majlis al Jinn is the second largest cave chamber in the world. It is located in a remote area of the Selma Plateau at around 1600 meters altitude in The Sultanate of Oman. It was discovered in 1983 by Don Davidson, a geologist studying water resources in the Sultanate. Davidson presumably died some ten years later when he left Oman permanently and went hiking in the Andes. He rented a car, drove it to a trailhead, left a note on it saying where he was going, and was never seen again.

Access is through a hole in the ground with a rope. The inner height is between 120 and 150 metres. The cave floor 300 by 200 metres. To give an idea of scale, the Great pyramid of Giza of Egypt (the largest Eygptian pyramid) would almost exactly fit inside the cave chamber; that is, its base is approximately the area of the chamber floor, and its height is also similar. 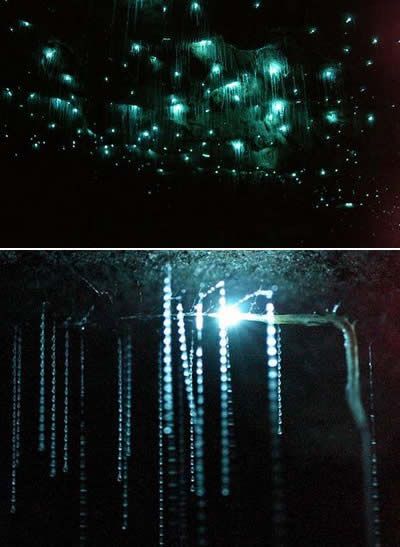 The Waitomo Glowworm Cave is a cave on the North Island of New Zealand, known for its population of glowworms, Arachnocampa luminosa. These glowworms spin a nest out of silk on the ceiling of the cave and then hang down. Then, the larva glows to attract prey into its threads, so that the roof of a cave is covered with larva can look remarkably like the heavens at night. A hungry larva glows brighter than one which has just eaten.

A silicon strand is lowered from the ceiling, alongside hundreds of others. Beautiful though these threads are, they have a sinister purpose. To trap its prey it [the cave glow worm] goes fishing with a line of silk. That ghostly blue light is the result of a chemical reaction taking place inside a special capsule in its tail? Insects seem irresistibly drawn towards the source and then get trapped by the sticky lines. Once stuck, there is no escape. Now it?s just a matter of reeling in the line and slowly consuming the catch ? alive. By ensnaring the insects that hatch in this cave, these glow worms have solved the biggest challenge that permanent cave dwellers face finding a regular and reliable source of food. 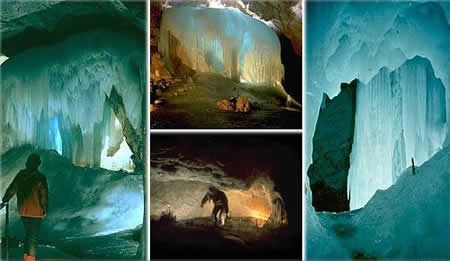 There are many ice caves throughout the world, but the Eisriesenwelt Ice Caves in Austria are some of the largest known to man. They are located within the Tennengebirge Mountains near Salzburg and stretch for a remarkable 40 kilometers. Only a portion of the labyrinth is open to tourists but it?s enough to get a taste of what the remaining network is like: a truly mesmerizing palate of Mother Nature?s handicraft. Ice caves are very different from normal caves. They have a strange feeling about them, as though they are not from this planet, and one has just temporarily stepped into their world when spelunking their depths.

1. Cave of the Ghost (Venezuela): so vast that two helicopters can comfortably fly into it 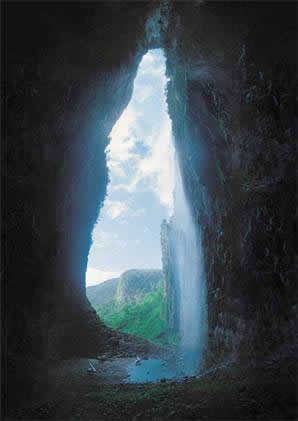 ?Cueva del Fantasma? ? Spanish for ?Cave of the Ghost? ? is so vast that two helicopters can comfortably fly into it and land next to a towering waterfall. A waterfall coming down one wall forms a small pond at the floor. When it was recently discovered, researchers also discovered a new dendrobatid frog species, Colostethus breweri, named for the frog?s identifier, Charles Brewer-Carías.