Roaring success: The scarily life-like paintings show why 4D is the big new thing in art

You can tell from the smile on this art lover’s face that she isn’t really in any danger from the pouncing lion that appears within striking distance of her.
And the fact that the lion is leaping from a red wardrobe, inspired by the Chronicles of Narnia, tells you something fantastical is occurring in the art world.
As ‘realistic’ as it may look, this incredible painting is simply part of a new exhibition of four dimensional art in North East China. 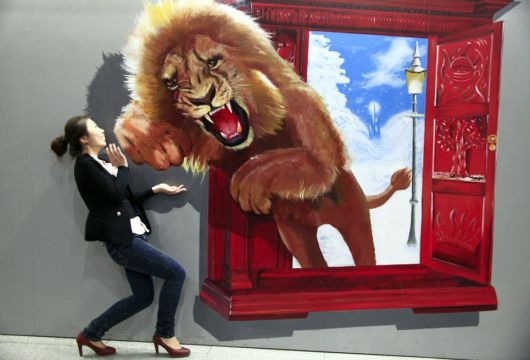 Famous fantasy: This image inspired by The Chronicles Of Narnia is a striking example of the 4D art on offer in China 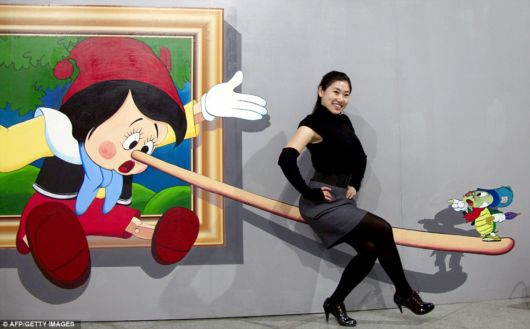 Cartoonish quality: Pinocchio’s nose juts out from the canvas, allowing this lady to pose as part of the picture for her own photo 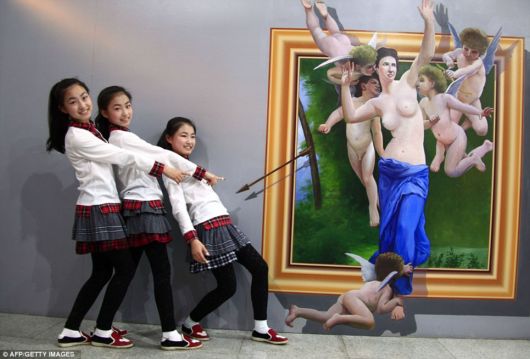 Cupid’s arrow: The ability interact with the paintings for photographs has been a major draw to the exhibition in Jilin

The collection of paintings, on display at a contemporary art exhibition in the Jilin province, uses techniques similar to the ‘stand-up’ advertising hoardings that are sometimes painted on the edges of sports pitches.
With cunning use of shadow they trick the eye into believing that the images are leaping off the canvas, that arrows are firing towards the viewers gaze from the bows of cherubs, or that Pinocchio’s nose is protruding wildly from the frame.
The pieces are a huge hit with spectators who have already shown a talent for interacting with the works to become part of the art themselves.
These photographs show how creative fans have snapped themselves holding the end of Van Gogh’s paintbrush, shouldering the train of a portrait’s flowing dress and, in one clever sideways snap, skydiving from the safety of of the gallery floor.
China’s artistic community is currently a focal point for the world.
It’s most prominent artist the acclaimed Ai WeiWei, 53, has not been heard from since he was detained by Chinese authorities at Beijing airport on April 3, for ‘economic crimes’ – an event which has prompted strong international criticism. 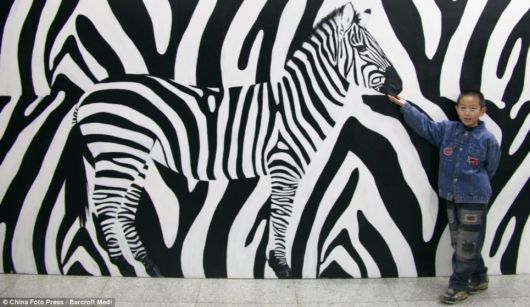 It’s not black and white: Even when you know the tricks the artists are employing, you can still be taken in by the levels of depth perception in the images 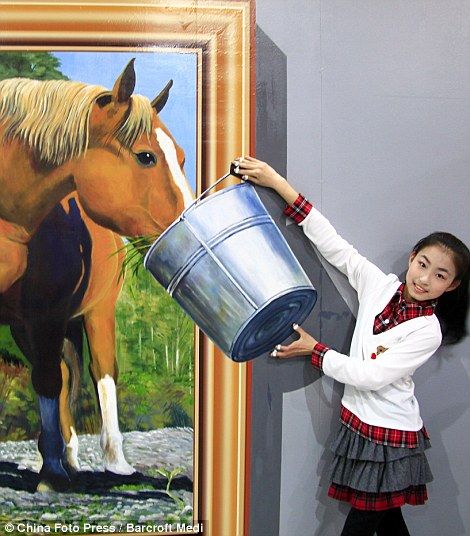 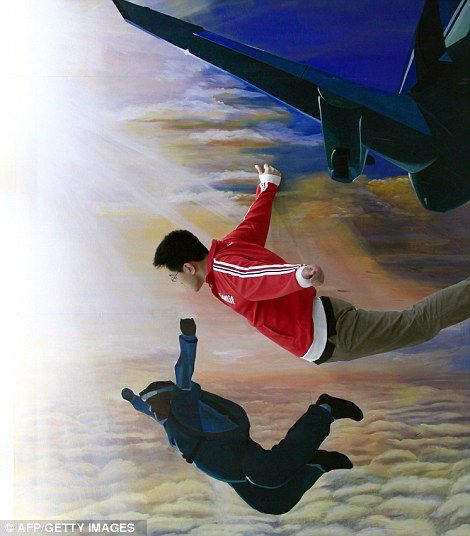 Beyond the pail: Could this interactive art experience replace a trip to the farm or, right, could it make skydiving a lot safer for those with vertigo? 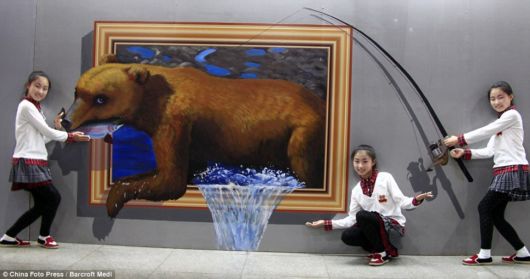 What’s the catch? These girls managed to hook a bear on the end their salmon during a quiet day’s fishing at the Jilin gallery

But there is hope that freedom of expression will gain a stronger foothold in China as the country enjoys an incredible surge in the popularity of art.
According to a report from the European Fine Art Fair (Tefaf), which opened today in the Netherlands, China overtook Britain as the world’s second biggest market for art and antiques in 2010.
Back in 2006, China had just a six per cent share of the market and the UK bought as much as 27 per cent.
But last year China raked in 23 per cent of the world’s art, one per cent more than Brits brought home. 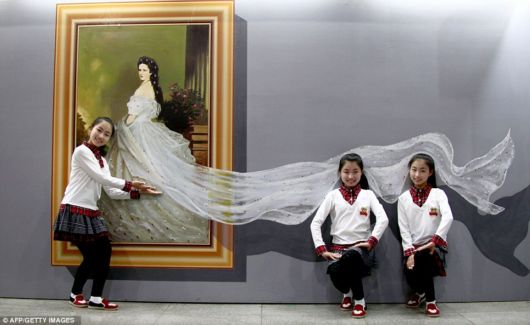 Grand unveiling: Visitors have streamed into the gallery since the interactive exhibition opened 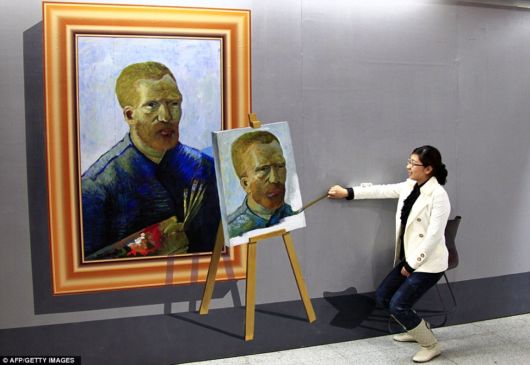 Fill in the blanks: This lady took the unique opportunity to share an easel with Vincent Van Gogh and polish off an unfinished portrait of the artist 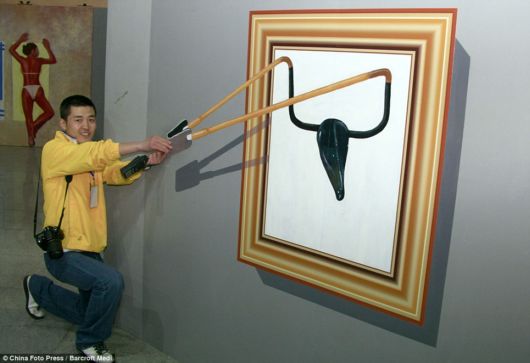 Pull the other one: It can take a few minutes of looking at these utterly convincing works of perspective before the eye determines what is happening

Both countries are still lagging behind the U.S., which has a 34 per cent share, while France is the only other significant international player with a six per cent share. The rest of the world accounts for the remaining 15 per cent.
The world art market hit a peak of ?48 billion in 2007 and had been declining since then, dropping by around 33 per cent to ?28 billion in 2009, the biggest decline since its previous recession in the early 1990s.
But it recovered strongly last year, more than doubling in value to ?43 billion.
‘This recovery was driven by the US and China, while European growth was much more sluggish,’ said the Tefaf report.
‘The recovery in 2010 was also driven by strong spending by Chinese art buyers as the geographical distribution of wealth continues to shift East.’