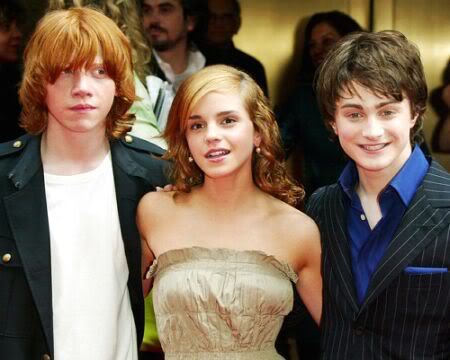 It?s been four years since the release of the sixth book and two years since the release of the last movie. So it?s not unlikely that even the fiercest of Potter fans need a memory refresher when ?Harry Potter and the Half-Blood Prince?, the sixth in the seven part series by J K Rowling graces theatre screens this weekend. Here is burrp! bringing you the story so far?

Harry Potter and the Sorcerer?s Stone (2001):
Here, we are introduced to young Harry Potter, orphaned at 1 by Lord Voldemort who tried to finish him off as well, but somehow the boy wonder manages to survive with nothing but a lightning scar on his forehead as reminder. He is brought up by the Dursleys – his uncaring Aunt Petunia, her horrid husband, Uncle Vernon, and their overweight son, Dudley.

When Harry turns 11, a half-giant named Hagrid informs him that he?s no ordinary boy and that he?s destined to spend the next seven years of his life honing his skills at the Hogwarts School of Witchcraft and Wizardry. Harry leaves his dreary life at the Dursleys? to discover a world of magic where he finds lifelong friendship in fellow students, Ron Weasley and Hermione Granger, and a mentor in Principal Albus Dumbledore. He also learns that Voldemort, who is still around, is trying to regain physical form by going after the Sorcerer?s Stone for its life-enhancing properties, but his efforts are thwarted by Harry.

Harry Potter and the Chamber of Secrets (2002):
Harry?s miserable summer vacation at the Dursleys ends with the appearance of Dobby, the house elf, who warns Harry off returning to Hogwarts as his life is in danger. But Harry doesn?t listen and his return even involves an adventure with Ron and the Weasley?s flying car.

At Hogwarts, mysterious things are going on – voices only Harry can hear, people turning up ?petrified?, attacks on students from nonmagical families (muggles), a myth that the Chamber of Secrets has opened up and a snake-like monster is on the loose, and the disappearance of Ron?s younger sister, Ginny. Harry then enters the chamber and comes across the spirit of Tom Riddle, a former Hogwarts student who is behind all the trouble. Riddle is the one who later becomes Voldemort, but for now, remains defeated by Harry.

Harry Potter and the Prisoner of Azkaban (2004):
Harry?s third year at Hogwarts starts with a run in with the demontors, who can basically suck out peoples? souls. Meanwhile, terror has gripped the wizarding world with the escape of the notorious Sirius Black from Azkaban Prison and rumour has it that he is on his way to Hogwarts due to which Harry?s life is in danger. But Sirius, in fact, is after Scabbers, Ron?s pet rat. It turns out that the animal is a transfigured Peter Pettigrew, a Voldemort follower who committed the crime for which Black was wrongly imprisoned and also betrayed Harry?s parents.

With Peter captured, Sirius thinks he can get exonerated but unfortunately the rat escapes, and he returns to a life on the run. Harry learns his parents were connected to Sirius who turns out to be his godfather!

Harry Potter and the Goblet of Fire (2005):
Lord Voldemort is still trying to gain a physical form in this one and his plan involves the presence and blood of Harry Potter. Harry joins Ron and his family at the Quiddich World Cup where things end up going badly. Then Hogwarts hosts the Triwizard Tournament, which pits one advanced student from each of three academies against each other in a series of difficult challenges. But things take a bad turn in the end when one student dies, leaving Harry not only guilt-ridden, but also face to face with the evil Lord Voldemort. Harry barely manages to escape unscathed. One thing is for certain, Voldemort is back and is becoming increasingly powerful.

Harry has other problems to deal with – a Ministry official, Dolores Umbridge, who delights in physically and verbally abusing students, has been planted at the school to teach Defence Against the Dark Arts and more importantly, to keep Harry and the others in line. Harry then decides to teach this class himself, in secret of course.

All this leads to a life altering climax in the Ministry of Magic building where a deadly battle ensues between Harry and his friends and Lord Voldemort. Though Harry prevents the Dark Lord from laying his hands on a prophecy that foretells their linked destiny, he loses Sirius Black in the process.

Harry Potter and the Half-blood Prince (2009):
In the sixth edition, Harry is still struggling to come to terms with Sirius?s death when Dumbledore offers him a chance to find out more about Lord Voldemort and how to defeat him. Life as a teenager is not easy either with Harry developing feelings for Ron?s sister, Ginny, and Ron and Hermione fighting their attraction for each other.

Harry and Dumbledore end up uncovering some secrets about Voldemort and go after him and what follows is pure evil.

For those who haven?t read the books, I won?t say anymore or I will have to issue a spoiler alert! Catch all the action with the latest in the Harry Potter series, released at a theatre near you recently.