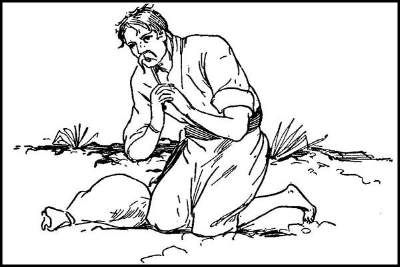 The story is about a King and a Mendicant. The king was famous for his charity. People said, ?To the hungry he gives food; to scholars he gives rewards; to noblemen he gives titles and honours. In fact, he is never tired of giving.?

But he had in fact, already tired of giving. He thought, ?All my life I have been giving alms and awards. Where is the end? Are the people really needy or they continue to flock simply because I give? Don?t I see the same faces coming to me again and again wearing a standard mask of gratitude??

Accordingly he sent his minister to find out the poorest man.

A week later the minister returned and announced in the tone of a successful explorer, ?My Lord, not far from here, inside the forest, there is a small mountain. On top of that sits the poorest man of our land ? a mendicant. He had no roof on his head, nothing on his body except a yard of bark; he lives on whatever fruits some wood-cutters leave beside him on their way home from the forest.?

?Is there really such a man in my kingdom? I must see him,? said the king and rode into the forest and then climbed the mountain and found out the mendicant sitting still, his eyes closed.

The king had to wait for a long time. When the mendicant opened his eyes, he said, ?I am the king of this land. I am sad to see the miserable condition in which you are living. I want you to dress well! Tell me, which dress will you like? Dhoti or gown?? The mendicant smiled, but kept quiet.

The king said again, ?I would like to build a house for you; tell me, what kind of house would you like to own?? The mendicant smiled again; yet he did not speak.

A little later the king again said, ?I will arrange to send some food for you everyday. Tell me your preference in matters of food.? The mendicant smiled but still kept mum.

The king began losing patience and cried out, ?I appeal to you, do speak!?

Slowly but sweetly the mendicant said, ?My dear king, you are mistaken. I am not the poorest man. There is another man in the kingdom who is poorer than myself. So far as I am concerned, although I look poor; I am very rich, for I can change the earth into gold.?

The king gaped with amazement for some time and asked, ?Will you kindly tell me who is poorer than you? And will you kindly reveal to me the secret of transforming the earth into gold??

The mendicant said, ?To know these things you have to follow a certain discipline.?

?For one year, everyday, you must come here once before the sunrise and once again before the sunset and spend some time with me,? said the mendicant.

?I will do so,? said the joyous king, bowing to the mendicant.

And he came there twice every day without fail. The mendicant seldom uttered any word, but his charming smile always spoke of his affection for the king. He made the king sit down and meditate for some time. For the king, the discipline was a bit awkward experience for the first few weeks. But soon he realised that it was a most welcome change from the dry or anxious hours in the court where he was always surrounded by diplomats and flatterers and discontented people. After a few months he grew so fond of his visits to the mendicant that he eagerly looked forward to the twilights.

The silence of the mountain, the sunrise and sunset which coloured the landscape, the breeze which embraced him with the message of freedom, the songs of the birds in the wood and above all the quiet yet overwhelming presence of the mendicant slowly made the king a different man. The little time he spent there everyday had its sure effect on the rest of his time and routine.

The king did not remember when a year passed. He even did not know when several years passed. At the end of the third year, one day the mendicant suddenly asked the king, ?Well, it seems we have forgotten about the two things you wanted to know ? about the man poorer than myself and about the secret of transforming the earth into gold! Would you not like to know about them??

The king smiled and replied, ?But haven?t I known them already? I was the poorer man because I was anxious to possess more gold as I was begging to know the secret of changing the earth into gold. And secondly, I believe, by now I know the secret of changing the earth into gold.When I sit here and marvel at the splendour of nature all around, at the sunsets and the sunrise when the colours of heaven are sprinkled on earth, at the diamond-fringed clouds, at all God?s creation?all appear to me a thousand times more wonderful than gold.?

The mendicant smiled and said, ?You have got it ? and that is because you have turned gold within?.