We read Akbar and Birbal stories throughout our childhood. They always ended with a sweet little moral that taught us a thing or two about life. Today, we are revisiting those stories and taking out some essential work advice from them. Read on as we tell you some simple messages that could help you at your work place.

1. You don’t have to believe everything you hear. 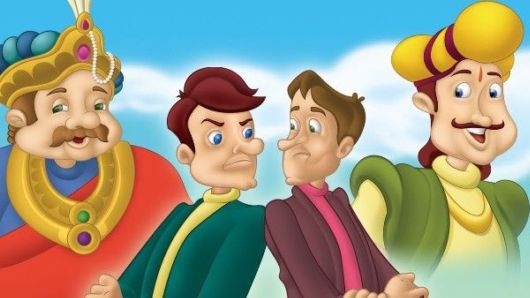 One day Akbar asked his courtiers if they could tell him the difference between truth and falsehood in three words or less. The courtiers look at each other in bewilderment, but couldn’t find an answer. The emperor finally turned to Birbal. ‘Four fingers’ said Birbal. The emperor was confused, but Birbal elaborated. ‘That’s the difference between truth and falsehood, your Majesty. Everything you see with your own eyes is the truth. But what you hear with your ears may or may not be true. More often than not, it’s likely to be false.’ But Akbar didn’t get the point of ‘ four fingers.’ To which Birbal replied ? ‘The distance between one’s eyes and one’s ears is the width of four fingers.’

The moral of the story is to trust your eyes and nothing else.

2. When you’re stuck with something on an important assignment, think calmly and you’ll figure a way out. 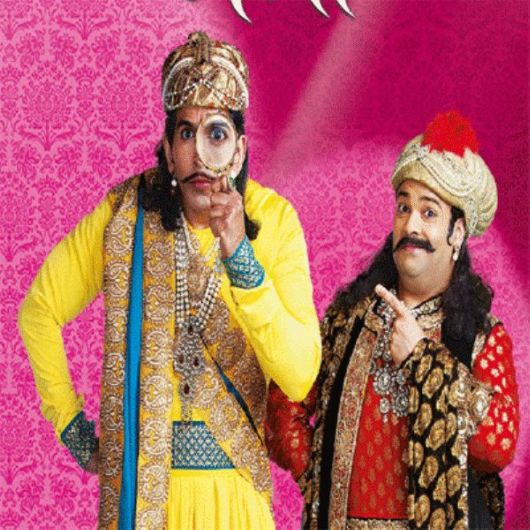 One day, Emperor Akbar and Birbal were taking a walk in the palace gardens. Suddenly Akbar asked Birbal how many crows were there in his kingdom. Birbal replied, ‘There are ninety-five thousand four hundred and sixty-three crows in the Kingdom.’ Akbar tried to test him again, ‘What if there are more crows than you answered?’ Without hesitating Birbal replied, ‘If there are more crows than my answer, then some crows are visiting from other neighbouring kingdoms.’

‘And what if there are lesser crows?’ Akbar asked.

‘Then some crows from our kingdom have gone on a holiday to another place.’

It’s simple. There is always a way if you think with ease. Always.

3. Sometimes, all you need is a great idea. 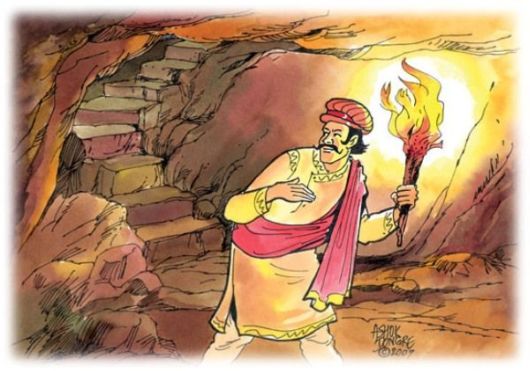 Once there was a complaint at King Akbar’s court. There were two neighbours who shared a garden. The garden had a well that was owned by Iqbal Khan. His neighbour, a farmer wanted to buy the well for irrigation purpose. Therefore, they signed an agreement between them, according to which the farmer owned the well. Even after selling the well to the farmer, Iqbal continued to fetch water from the well. Angered by this, the farmer came to King Akbar. Akbar asked Iqbal the reason behind fetching water from the well after it had been sold. Iqbal replied that he had sold only the well to the farmer and not the water inside it. The matter went to Birbal who solved it in less than a minute. He said, ‘Iqbal, you say that you have sold only the well to the farmer. And you claim that the water is yours. Then how come you can keep your water inside another person’s well without paying rent?’ Iqbal returned home speechless. Sometimes, matters at work need to be dealt with with a presence of mind and little trickery. 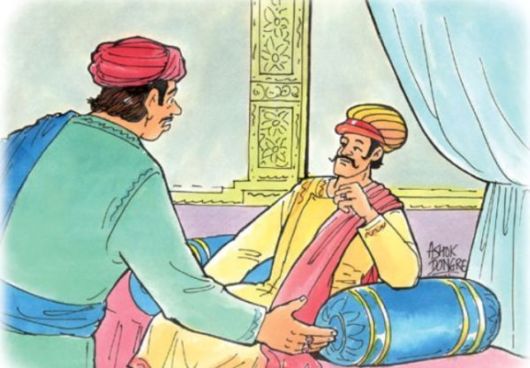 One day a man stopped Birbal on the street and began narrating his woes to him. ‘I’ve walked twenty miles to see you, and all along the way people kept saying you were the most generous man in the country,’ he told Birbal. Birbal knew the man was going to ask him for a favour. He replied, ‘While going back on the same way, please deny the rumour of my generosity,’ said Birbal, walking away.

5. You can always find a quirky way to work on something that’s boring. 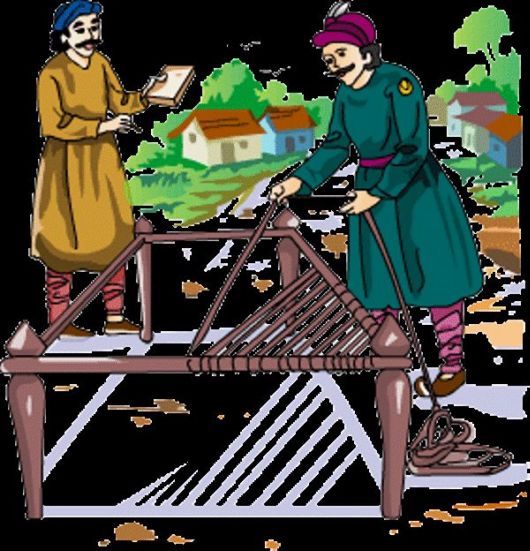 On a hot day, Akbar was travelling to a distant place along with some of his courtiers. Tired and angry, Akbar gave up and asked, ‘Can someone shorten this road for me?’ Birbal said he could. The other courtiers were shocked at Birbal’s response. Akbar asked Birbal to go ahead. ‘I will, but listen to this story I have to tell, said Birbal. Riding beside the emperor’s palanquin, he launched upon a long and intriguing tale that held Akbar and all those listening, spellbound. Before they knew it, they had reached the end of their journey. Akbar was amazed at how time had passed so quickly. This is how Birbal had shortened the road for Akbar. Before you give up on that project because it’s boring, think of a way to make it more interesting! There’ always be a way.

6. Completing the task is not important, how well you do it is what matters. 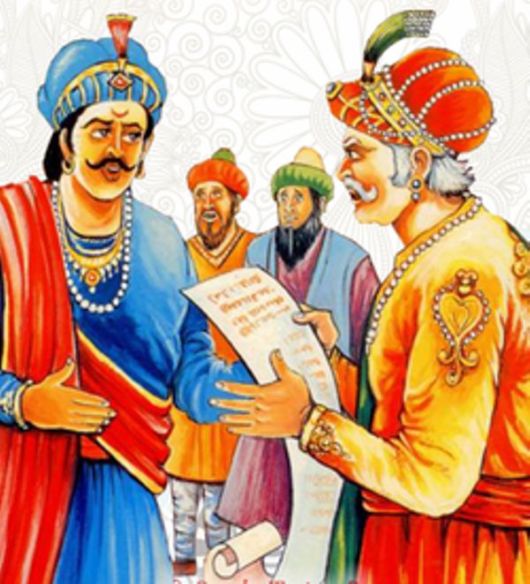 One day Emperor Akbar was inspecting his kingdom. One of his ministers, who was jealous of Birbal, complained to the Emperor, saying he gave importance only to Birbal’s suggestions, ignoring all other courtiers in the court. Akbar then decided to tell the court how wise Birbal was. There was a marriage procession going on. The Emperor ordered the ministers to find out whose marriage it was. The minister found out and returned with extreme pride. But when Birbal went there, he asked all the details about marriage, where they were headed and what the couple’s future plans were. Akbar had proved his point. It’s necessary to understand the difference between doing a shoddy job and doing a good job. Because sometimes it’s not enough to meet deadlines. It’s equally important to use your intelligence to make that work stand out.

7. If your boss makes a mistake, tell him without embarrassing him. 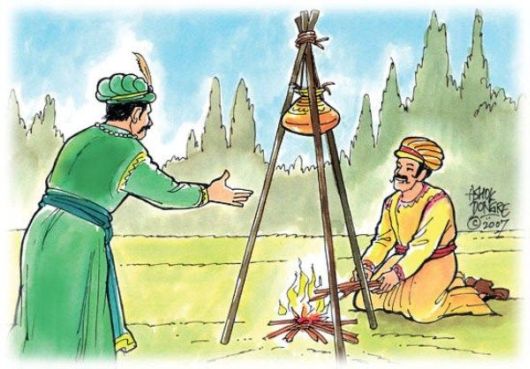 It was peak winters and the ponds were frozen when Akbar asked Birbal if a man would be inside the frozen pond throughout the night, without any attire for money. Birbal agreed. The next day, Birbal came to the court along with a poor Brahmin whose family was starving. He agreed to be in the pond all night. The whole night he was inside the pond, shivering. He returned to the durbar the next day to receive his reward. The king asked how he managed to withstand the extreme temperature all through the night. He replied, ‘I could see a faintly glowing light a kilometer away and I withstood with that ray of light.’

Akbar wasn’t convinced and refused to give him any reward. The Brahmin went to Birbal asking for help. Thereafter, Birbal stopped coming to the durbar and sent a messenger to the king saying that he would come to the court only after cooking his khichdi. After a few days, the king himself went to Birbal’s house to see what he was doing. Birbal had lit the fire and kept the pot of uncooked khichdi one meter away from it. Akbar questioned him, ‘How will the khichdi get cooked with the fire one meter away?’

Birbal replied, ‘When it was possible for a person to receive warmth from a light that was a kilometer away, then it is possible for this khichdi, to get cooked too. Akbar understood his mistake and rewarded the Brahmin man with 2000 gold coins.

It’s possible to handle such situations without anger or frustration. If Birbal could make Akbar realise his mistake without making him feel embarrassed, so can you.

8. People might not be their original selves at the workplace, so be careful of what you tell them.

There lived a blind saint in an ashram in the kingdom of Emperor Akbar who predicted the future correctly. Once, he had visitors who had come to treat their niece. The child’s parents were killed in front of the girl’s eyes. Once she saw the saint, she started to scream loudly saying that that saint was the culprit. The couple went to Birbal to seek help. In front of all the ministers, he drew a sword and neared the saint to kill him. The saint in bewilderment immediately drew another sword and began to fight. Thus, everyone found out that he wasn’t blind.

At a workplace, people sometimes try to manipulate others, so be wary of them.

9. Don’t ask your colleagues to do something that you wouldn’t do yourself. Although, you can ask for help! 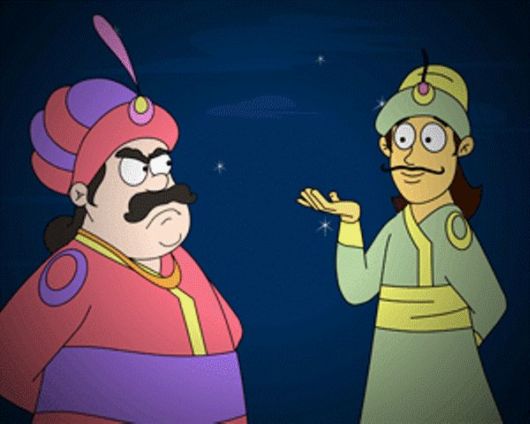 One day, one rich man wanted to punish a man named Hasan. He blamed him for stealing a necklace from his house. The rich man forced Hasan to put a red hot iron in his hands to prove his innocence. Hasan, on the other hand, refused to do it. Birbal intervened, suggesting the rich man to put the red hot iron on his bare hands as well. This would help him prove his innocence. The rich man refused to do it, and decided against it. Thus, the court knew Hasan had not stolen the necklace.

There will always be assignments or duties that you won’t enjoy doing, but to transfer them to someone else isn’t fair either. Don’t force other people to do things you wouldn’t do yourself.

10. Sometimes, all you need is a different perception. 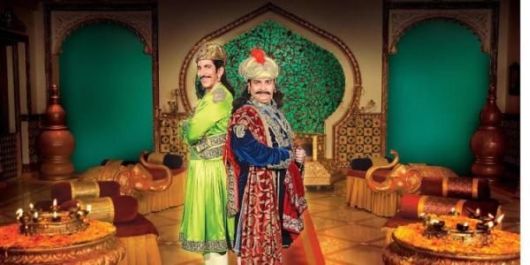 Once, Akbar asked Birbal if it was possible for a man to be the lowest and the noblest at the same time. Birbal said it was possible. Akbar demanded to meet such a person. Birbal went out and returned with a beggar. Birbal then told Akbar, ‘He is the lowest among your subjects.’ But Akbar wasn’t convinced if he was the noblest. To which Birbal replied, ‘He has been given the honour of an audience with the emperor," said Birbal. ‘That makes him the noblest among beggars.’ And Akbar was convinced.

There are days we all feel burdened with work, and saturated. On those days, maybe we just need to look at things differently. 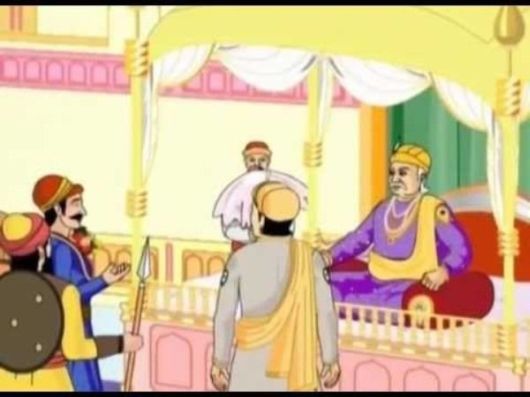 A man who made spears and shields once visited Akbar’s court. He said, ‘Your Majesty, nobody can make shields and spears to equal mine. My shields are so strong that nothing can pierce them and my spears are so sharp that there’s nothing they cannot pierce.’ Birbal was sure that he could prove him wrong, but the man thought it was impossible. Birbal finally said, ‘Hold up one of your shields and I will pierce it with one of your spears,’ said Birbal with a smile.

Confidence is a great quality, but overconfidence is equally bad. It’s impossible to know everything and that’s the reason we should never stop learning.