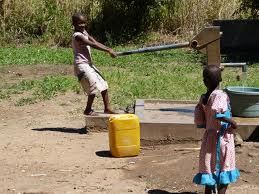 There is a legend of a man who was lost in the desert, dying of thirst. He stumbled on until he came to an abandoned house. Outside the dilapidated, windowless, weather?beaten, deserted shack was a pump. He stumbled forward and began pumping furiously, but no water came from the well. Then he noticed a small jug with a cork at the top and a note written on the side: "You have to prime the pump with water, my friend. P.S. And fill the jug again before you leave." He pulled out a cork and saw that the jug was full of water.

Should he pour it down the pump? What if it didn?t work? All of the water would be gone. If he drank the water from the jug, he could be sure he would not die of thirst. But to pour it down the rusty pump on the flimsy instruction written on the outside of the jug?

Something from inside told him to follow the advice and choose the risky decision. He proceeded to pour the whole jug of water down the rusty old pump and furiously pumped up and down. Sure enough, the water gushed out! He had all he needed to drink. He filled the jug again, corked it and added his own words beneath the instructions on the jug: "Believe me, it really works. You have to give it all away before you can get anything back."

That’s why Giving is important..!!!